Set off early, or so i thought at 7.15 (Only because Morrisons wouldn't open for my lunch before 7am). As i started, i quickly met a few walkers coming down the way, but i could tell they never reached the summit by the way they were dressed, however i may be wrong, although it was a bit early to have went up and down this early in the morning!
The first third of the walk is fairly easy as the paths are easy on the foot apart from a couple of light scrambles, but as you pass the upper red burn stream, the nice previous footpath starts to look and feel somewhat different at this point. The small and large boulders & lots of loose shale which now makes up this path can be hard work compared to the earlier path, but as you persist around the many zig zag bends (which become monotonous), the top path evens out into a better walking path, albeit still small rocks. You always get an extra lift, when you know its the final hike to the summit over the last couple of ridges, and this is no different. Weather was excellent and views over the North Face was stunning.
As addressed by many other comments, the amount of people trekking up here is hard to believe, but my biggest gripe is lack of courtesy or acknowledgement as you stand aside to allow people to pass.
Anyway, afterwards, we set off for Steall falls in the Nevis Gorge. Again, the car park was chock a block, and the small path walking to and from the waterfall wasn't meant for the amount of people passing at the same time. (Probably a good idea to head off early for this route as well.) Path was good and quite scenic in the gorge. Few bits of scrambling, wasn't a problem to us as we still had our boots on, but the lad with flip flops probably wished he had better footwear. The path eventually opens out into a large clearing with a part dried up river bed. if you were planning a snack or lunch, now is a good time to have it. There were blocks of ice running down the river when we were there. No idea where they came from. There is a wire bridge which takes you across the river, (Knee deep) to the base of the waterfall. Hey, it was only 45 minutes either way and worth a trek. All in all, a good days trekking and worth every step. 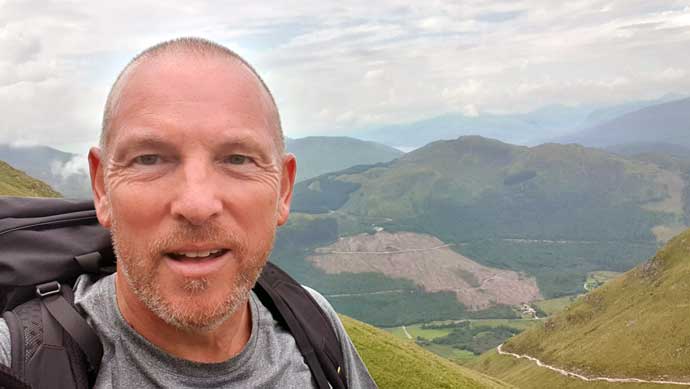