This 'little' outing was plan B, the original target was Beinn Bhuidhe in the west but the forecast of thundertsorms was not appealing, so with good weather forecast down south I asked George and Parminder if they fancied tackling some more little hills. George was unavailable but Parminder was keen to boost his Marilyn count so I volunteered to drive and offered to pick Parminder up at Straiton Park & Ride. I suggested 8am and I pulled up just after 7.30am and noticed Parminder had just arrived too. So with an earlier than planned departure we were ahead of schedule, which was just as well as Stranraer is not the easiest place to get to from the east. I opted to head down the A701 to Moffat then continue down to Dumfries before the long trek west. It took us not far off 4 hours after a little navigational hiccup after going through Stranraer, the A77 becomes a secondary road and we missed the right turn. A 3 point turn and we soon realised where we went wrong and we were soon approaching the start for Cairn Pat. Having read a few reports I noticed that there is a space for a car up the track before the reservoir, so we drove up the 200yds or so which also knocks off about 40m of ascent.

I knew the walk to the summit wouldn't take long so we took a chance and left our rucksacks in the car, there are a couple of gates to negotiate along with a field of cattle. Parminder called the hill "Cow pat" and there were plenty of them to avoid.

Once through the gates the road changes into a track

Fairly obvious where to go

Summit area, trig can just be seen if you look closely 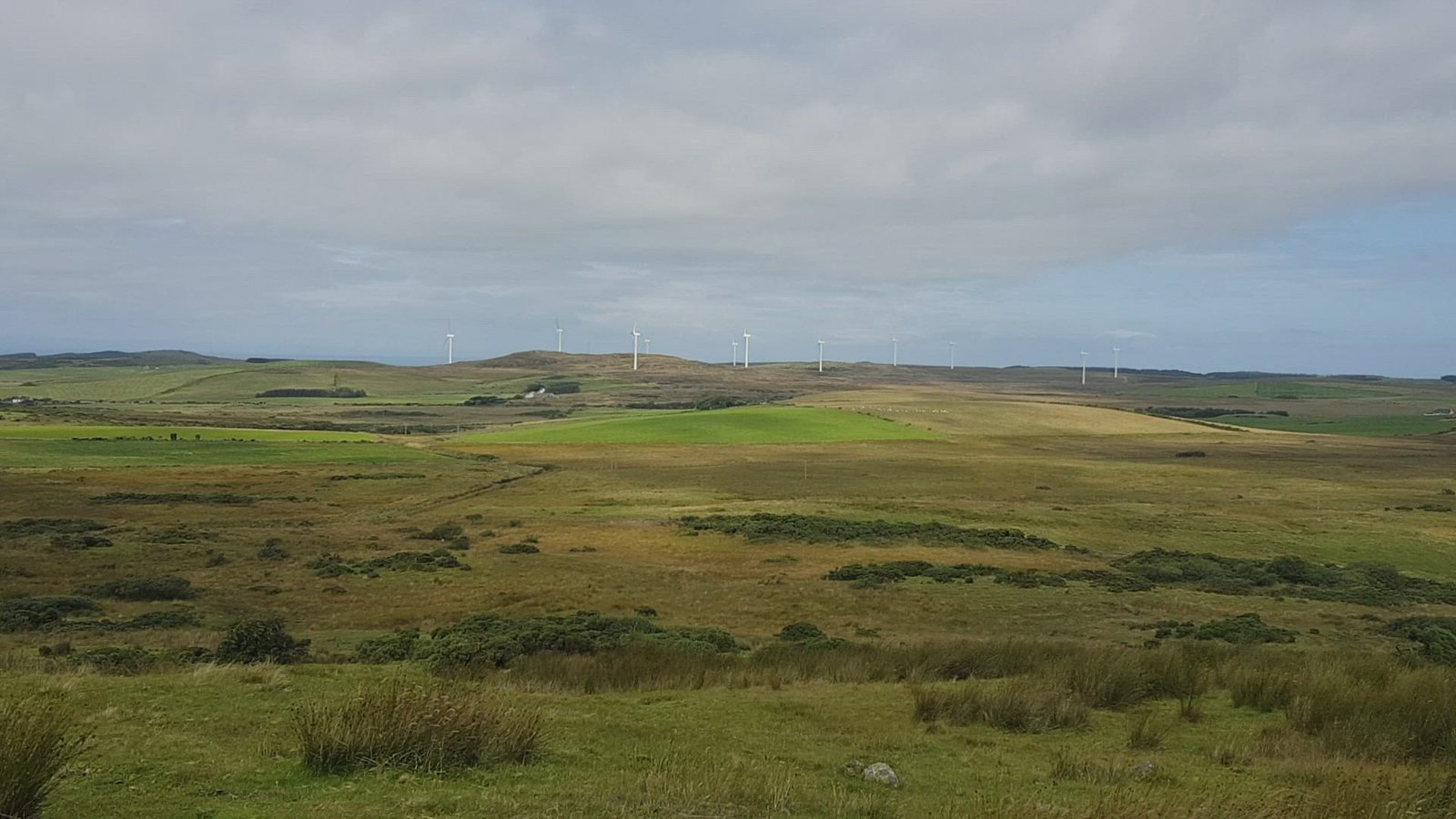 Video from the summit of Cairn Pat

They even have turbines down this way, you can tell the summit isn't very high in the grand scheme of things

Looking over Stranraer towards Cairnryan

Solway Firth in the distance

Cairn Pat is not what you would call a demanding walk, it offers great views but it is not the easiest hill to get to.
We kept our boots on and drove the short distance, through Stranraer and onto the A77 north past the huge parking area for the ferry at Cairnryan and then after 6 miles found our layby where we would be starting our next hill.

Once we were ready for the off, we had a short walk (about 30m or so) along the main road (no pavement), where there is a tarmac road that has a sign for Garlock House.

The way ahead for us

Garlock House, it is not exactly your normal detached house

Rather a large lawn to keep tidy

Gamekeeper with a sense of humour

Lovely walk through the trees, our entertainment would be starting soon

Hillside now visible and the way ahead is visible

Looking across the forested glen

Now for the entertainment, for about the next 2 miles we were accompanied by literally hundreds of birds that we think are grouse?

The birds seem to live on either side of the track in amongst the trees and bracken, we did see a couple of eagles (well birds of prey) hovering and the numerous birds obviously provide an easy meal. We think the birds are reared in the area, as there are a few fenced off areas on the south east side of the track. There are numerous feeding areas providing seeds along with a water providing system. 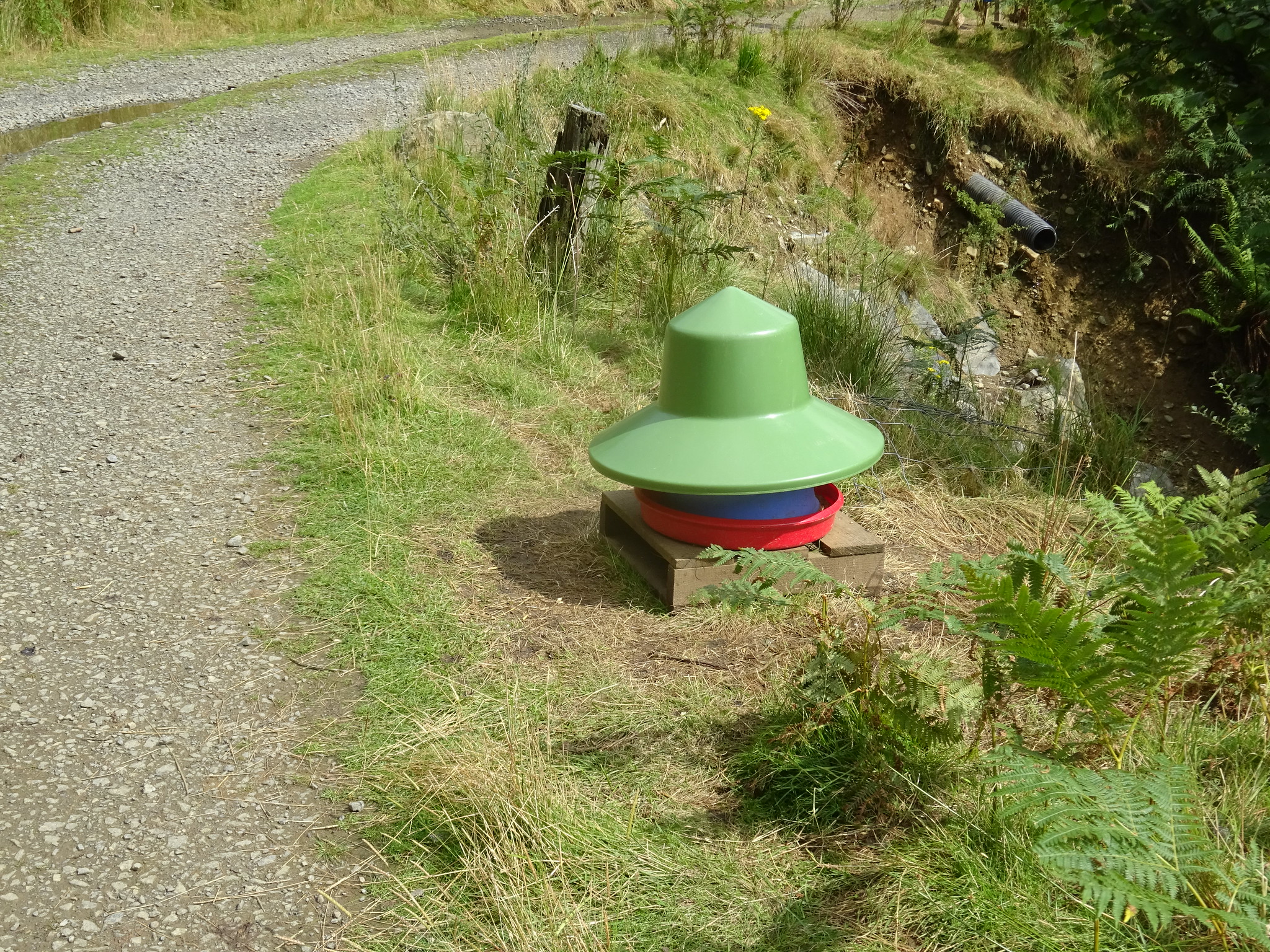 One of the numerous feeding stations 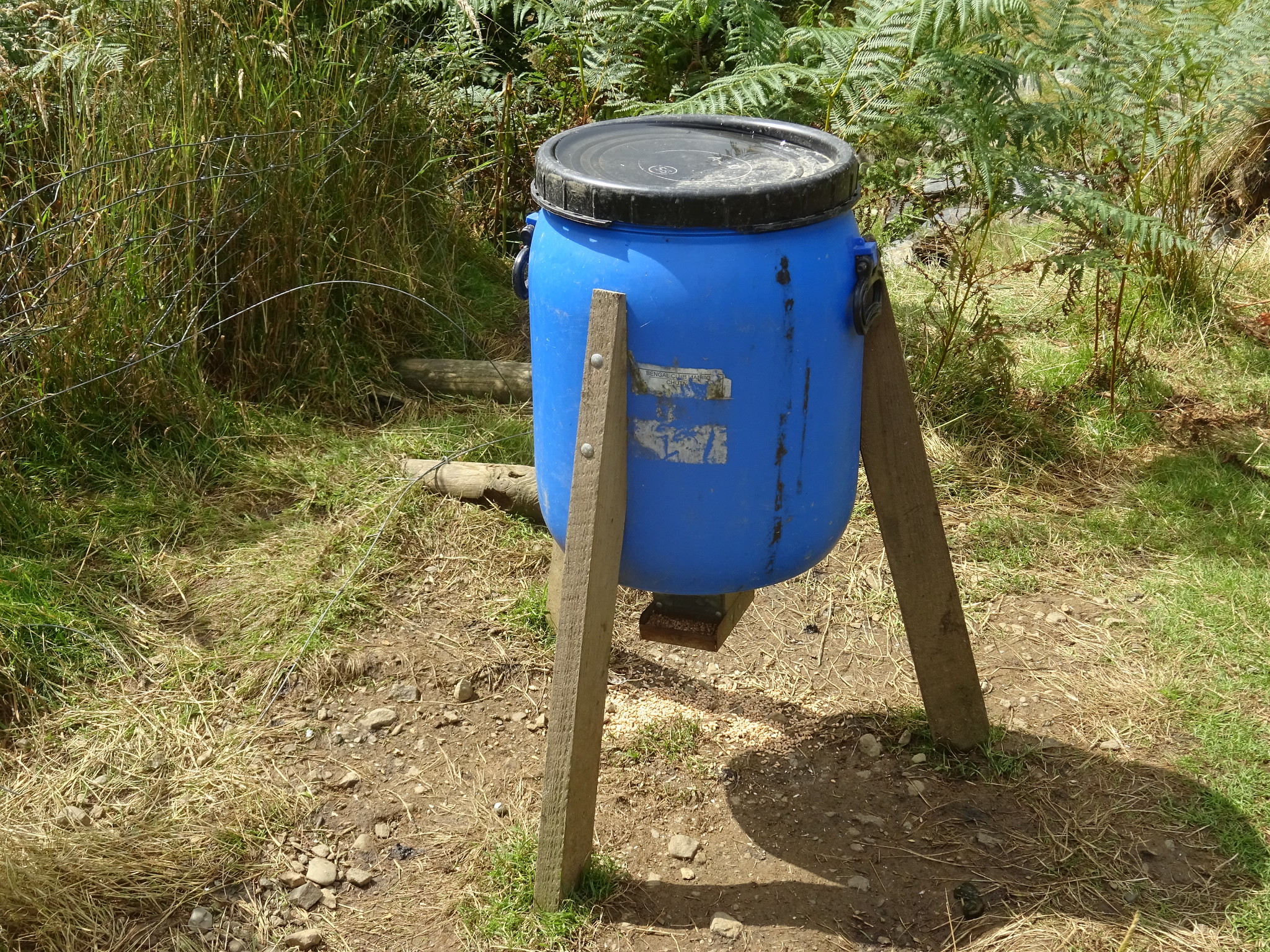 Another feeding drum, looks like it can hold quite a few seeds 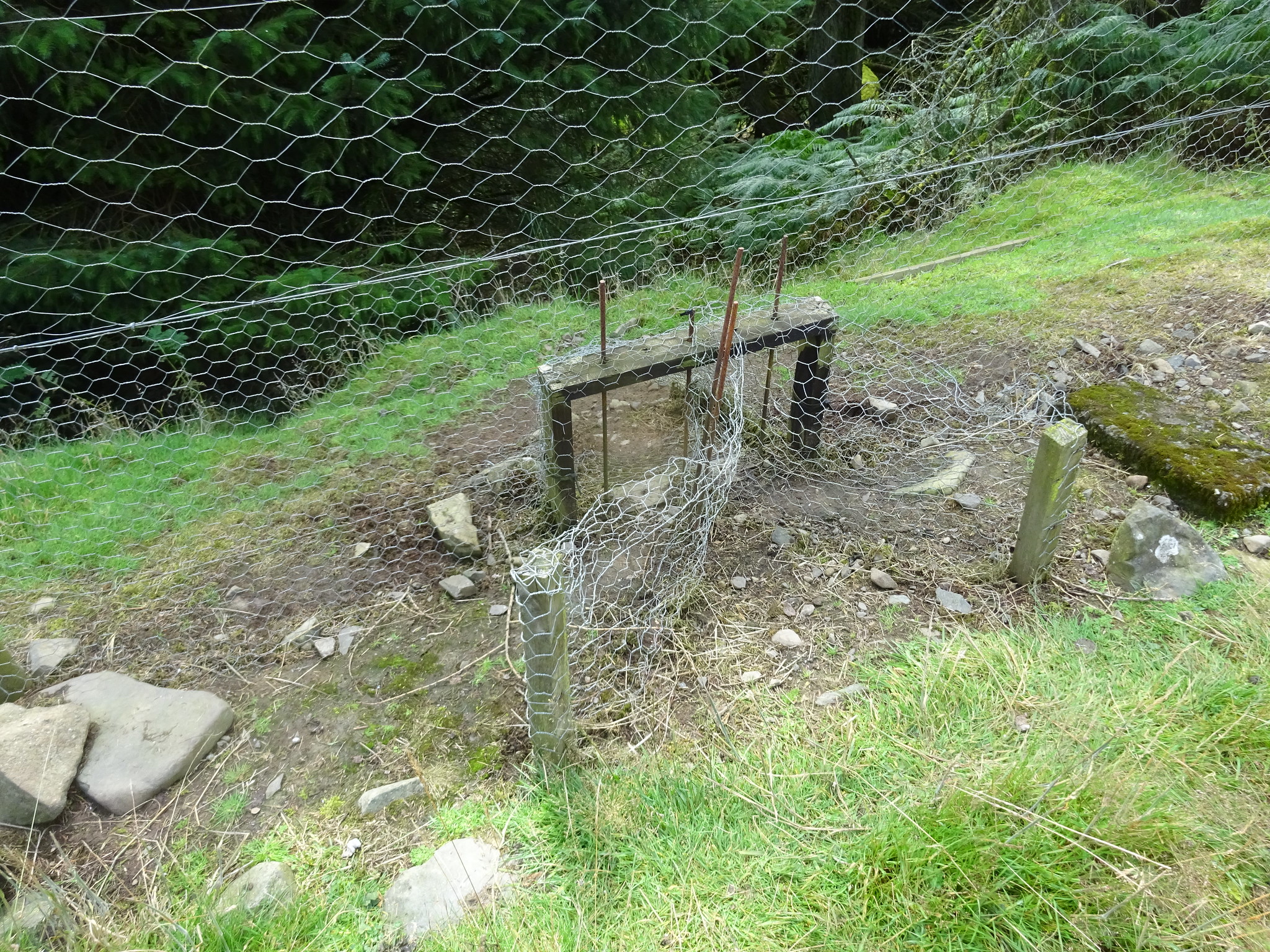 As we were walking along the track, the birds appeared out of the undergrowth and then proceeded to run in front of us a bit like "Roadrunner" until they realised we weren't stopping. They either flew off or ran into the undergrowth.

The way ahead with our feathered friends

If you zoom in you will see quite a few birds

There is a lower path and a couple of bridges, not quite sure why you want to cross the burn?

A sharpish descent, followed by a sharpish ascent

Looking back, we stayed on the high ground

This is what we could see in the distance

Parminder keen to sit in the drivers seat

Once we reached the abandoned machine, we followed an ATV track which was a bit boggy in places, that took us to the 'kissing gate' in rapid time and soon after the summit.

Parminder having to breath in to get through the gate 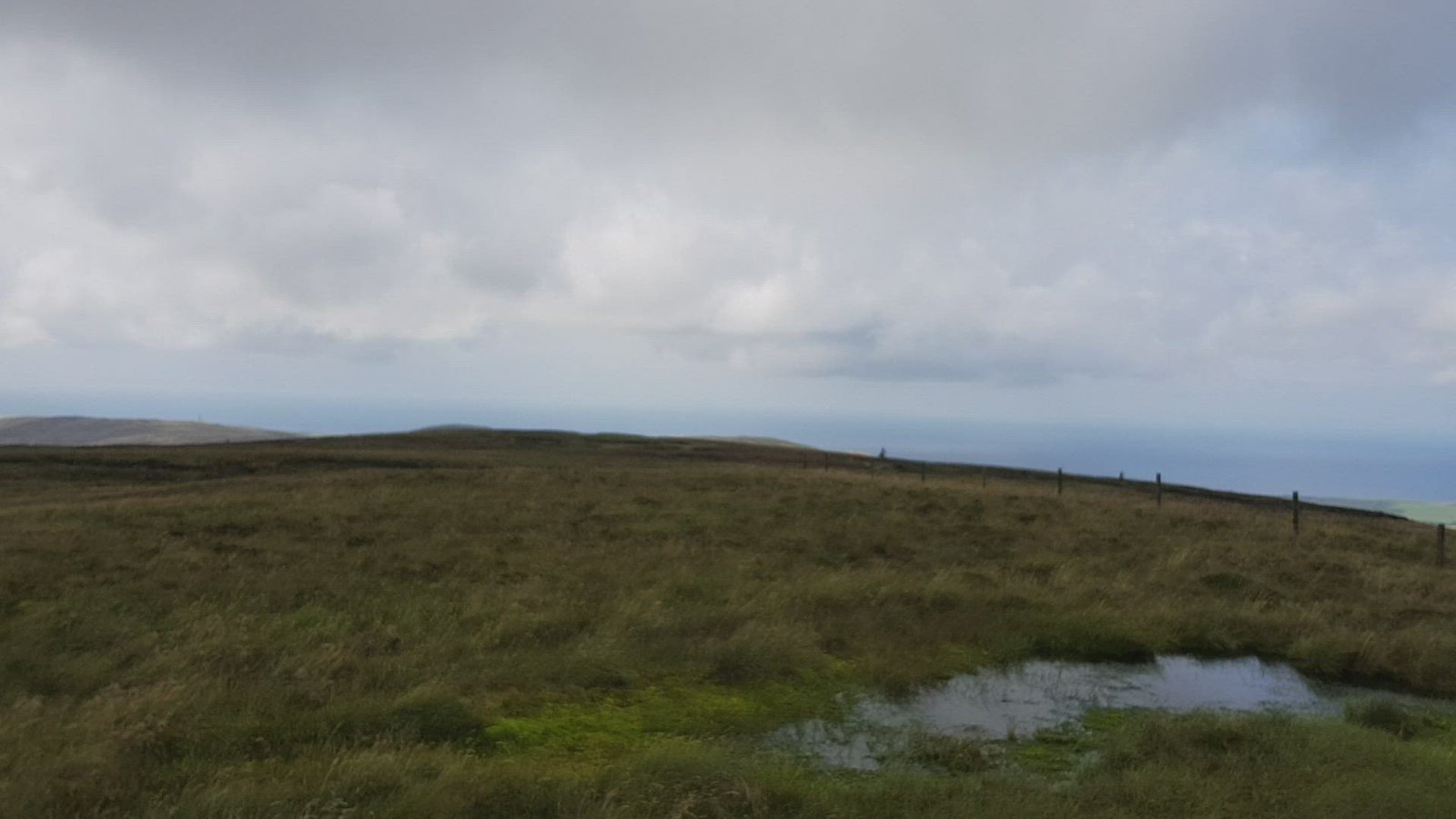 Video on the summit of Beneraird

After a few photos it was time to head down, especially as the clouds were starting to look a bit threatening. As we all know descending across heather and long grass is far easier than trudging over it uphill, so we made good time on the descent. We could see the track we were aiming for so it was a matter of trying to pick the easiest and quickest route. We followed the ATV track past the abandoned vehicle, but it wasn't long before the track started started to west then north and we wanted to head south west - time to adopt the direct approach.

The ATV track we adopted

Christmas tree all on its own

Nearly back on the track 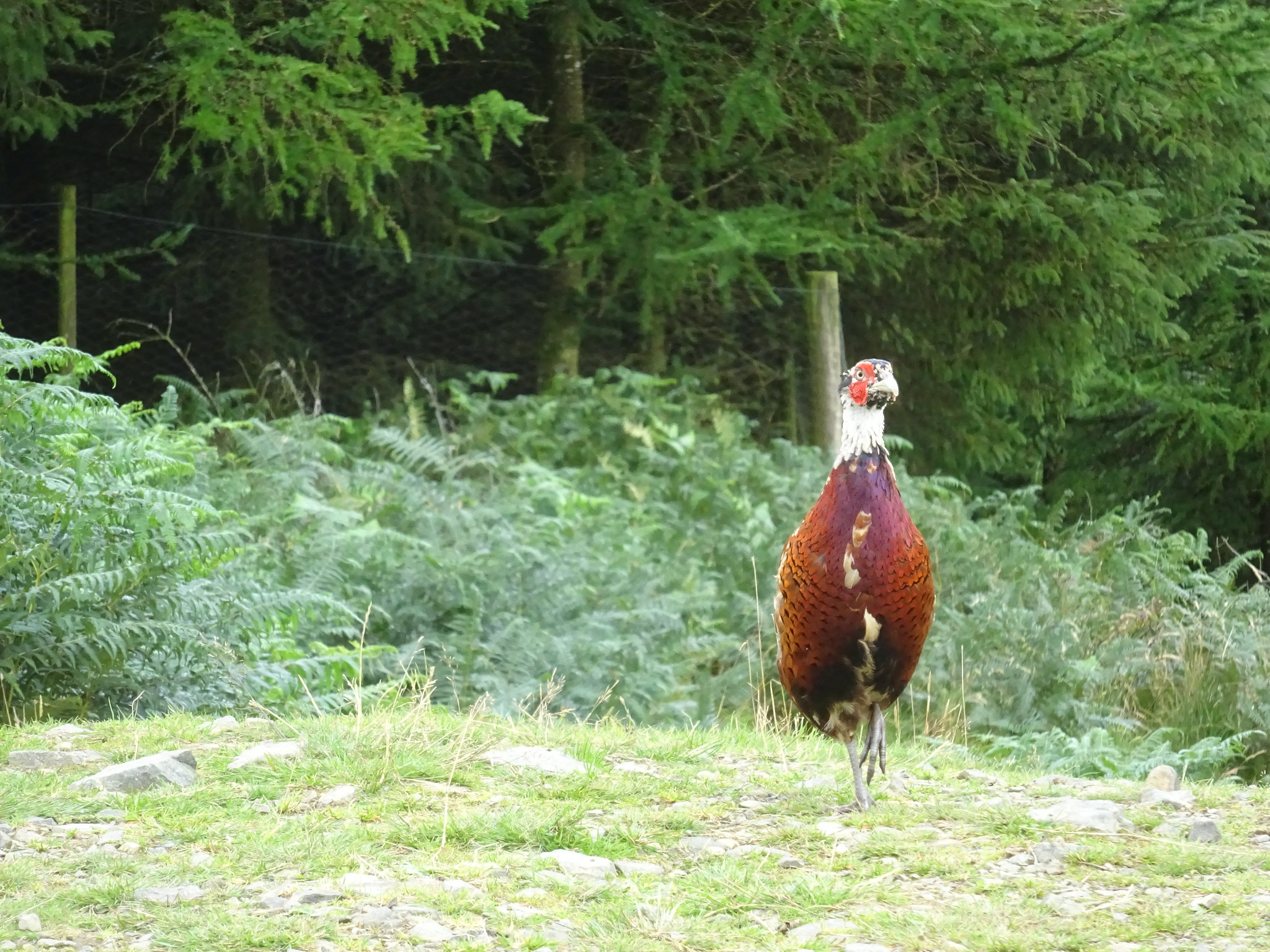 We were being watched whilst we had our lunch 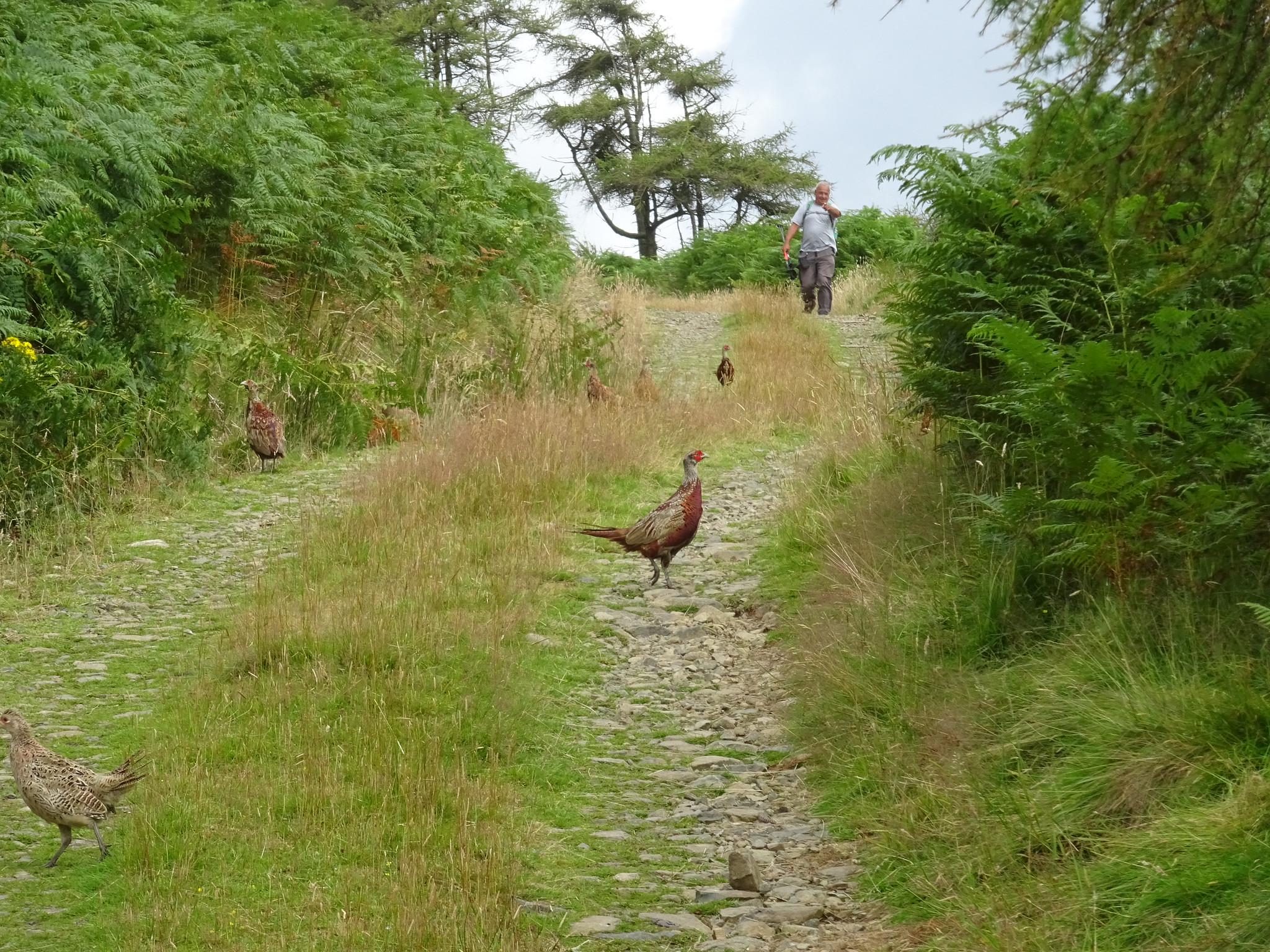 We had walked about 800m when Parminder thought he had left his camera at our lunch spot, he hadn't he had put it in his rucksack - this was him heading back to join me. One or two feathered friends will need to get out of his way

That was Beneraird and it was a cracking and entertaining walk. Boots stayed on for the short drive to the start point for Knockdolian.

We had a slight navigational hiccup, it doesn't help when we didn't have satnav. Parminder was using my road map to navigate to the start, one major flaw in the plan was that Knockdolian wasn't on the map but another hill with 'Knock' in it was and he was directing me there. We could see the hill itself but couldn't work out how to get there, so I pulled over and pointed out the mistake. About 400yds further on we came across the "B" class road we were looking for, happy days. Shortly after that we arrived at the start point.

Pretty obvious, says it all. One problem we didn't see it when we drove past it

The photo doesn't really show how steep it was, George would have loved it!!

Looking back, Parminder looking uphill towards the summit

Another gate to negotiate, there is another one lower down, but the deep bracken on the other side of the fence didn't look very inviting 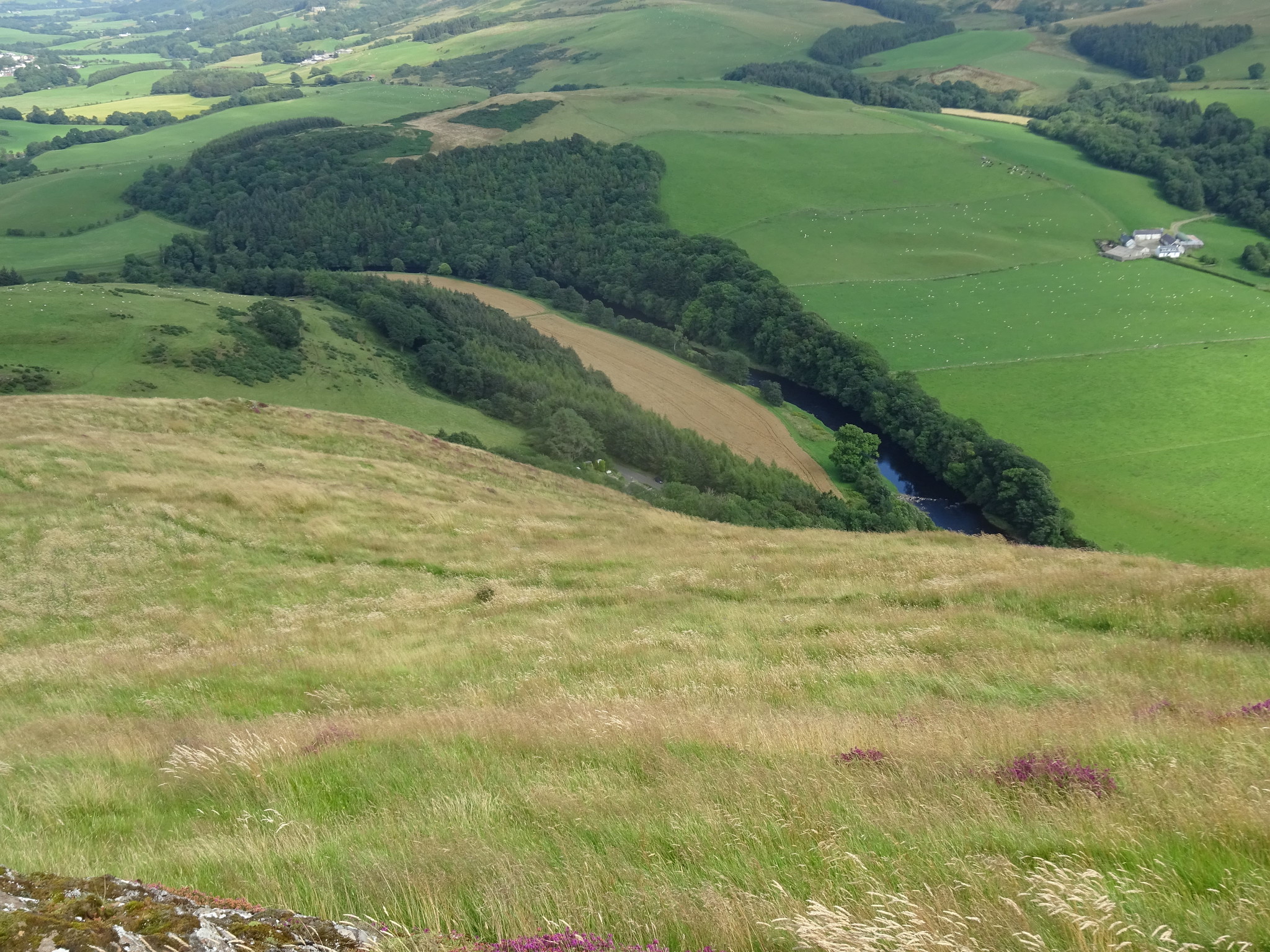 Looking down on the car

The trig with Ailsa Craig again 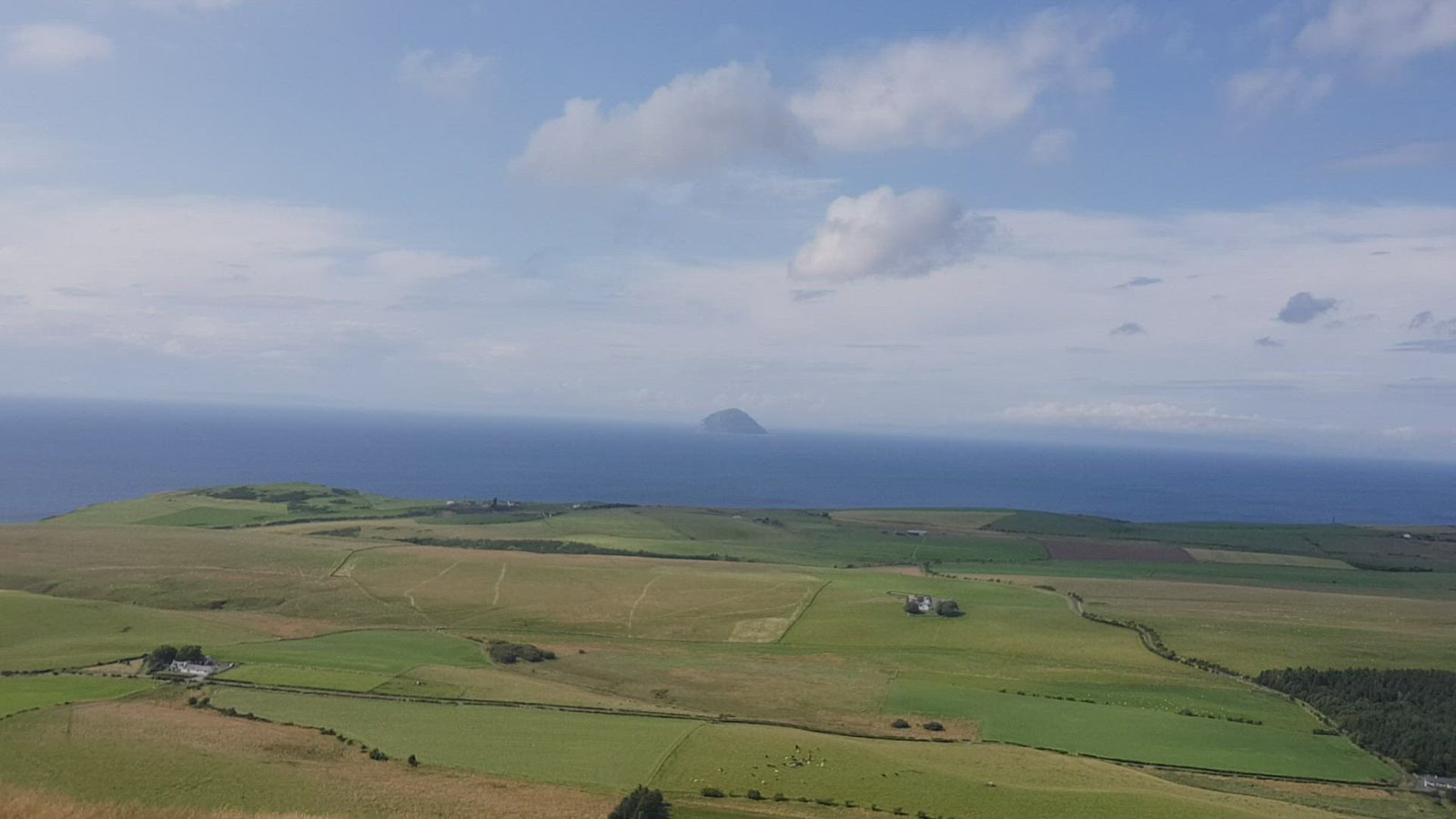 Video on the summit of Knockdolian

This turned out to be a very enjoyable day with 2 easy hills and one that was a bit more challenging. My original plan was to include Grey Hill on the menu, but the time spent in the car was far more than I intended. If anyone is interested we headed home via the A77/M77/M8. Thanks to Parminder for his great company and banter.