This is an alternative long hike to An Sgarsoch and Carn an Fhidhleir. If considering this route, bear in mind the following -

- It's a 2 day trek with wild camping.
- You need independent transport as the start and finish are 50 miles apart. I was dropped off and picked up by my wife.
- I did this walk on mid-Summer over two days, rough camping by River Feshie.
- Where there is no stalker path, there is heather and peat hags. This could be off putting in wet weather.

My wife and I were planning a trip up North for a holiday. When she suggested I might like to plan a walk on route, I immediately thought of Carn a'Chlamain, as it was relatively close to the A9. I then noticed An Sgarsoch and Carn an Fhidhleir, a few miles north of Chlamain. A plan started to form in my head - by having my wife driving, I could be met at the end of a long, one way trek. I then looked at Glen Feshie and noticed I still had to bag Mullach Clach a'Bhlair and Sgor Gaoith. Five Munros over two days, including two that are remote. An Sgarsoch and Carn an Fhidhleir are commonly reached via Linn o Dee. Reading this route, it looks a long trek to get to what, in all honesty, amounts to two, grassy lumps. I love all the hills but by no stretch of the imagination can you ever describe An Sgarsoch and Carn an Fhidhleir as mouthwatering climbs. However, a two day hike in the wilderness, and the chance to bag five Munros in fine weather sounded good.

According to my old Munro book (c.1994 publish) it is possible to gain permission from the Atholl Estate to drive up to the lodge house. I emailed them, and received a speedy reply - "No". Although I was only getting dropped off and not parking, we were still not allowed to drive past Old Tilt Bridge. This meant adding 6 miles of private tarmac road to the route. Admittedly, in the warm Summer sun, this was a pleasant experience. 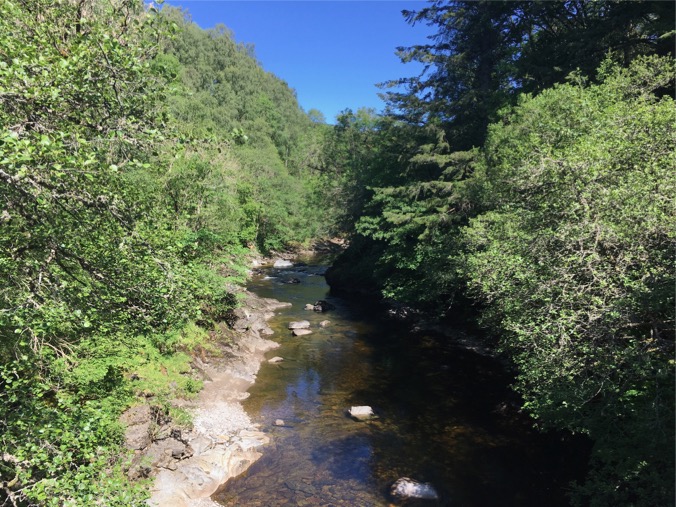 The walk through Glen Tilt is bonnie 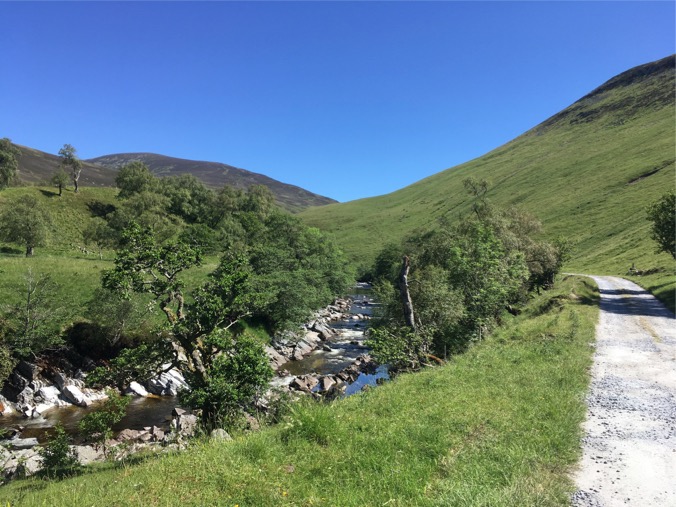 Shortly after Marble Lodge, I left the road and started the climb at Chlamain. There is a very good, clear path almost all the way to the summit. 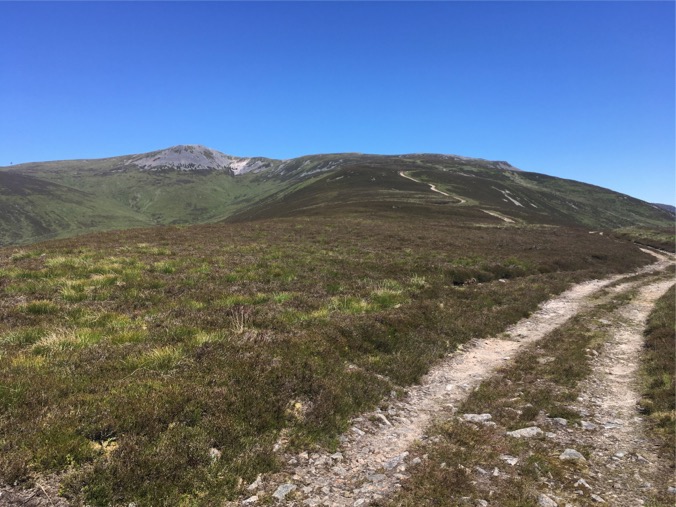 I reached the summit in little over an hour (I'm a steady 60 year old plodder). From the top, I was able to see the rest of my trek lying ahead of me, all the way north to The Cairngorms. I could just make out the little rocky peak of Sgor Gaoith. Everything else looked rounded or flat. 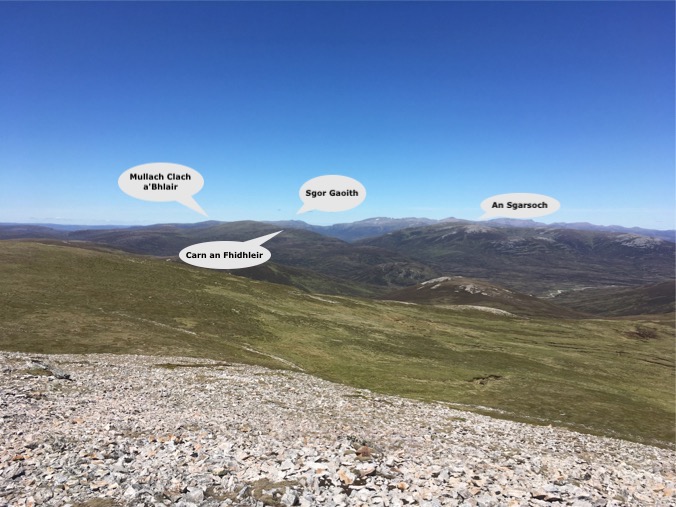 My next 24 hours laid out before me

My next hour's walk involved the first pathless section. This is where I encountered heather and peat bog. There were to be 3 further sections of the route that involved tramping through thick heather and zig-zagging through hags. Since there had been glorious sunshine all week, the bogs were dry and hard which made walking easy. But in imagining writing a report for WH, I did think this could be thoroughly miserable on a wet, Spring or Autumn day. By dropping height and following a burn, I came across the Feith Uaine bothy - Tarf Hotel, where I stopped for late lunch and a rest. One of the joys I have discovered about rough camping is there is no need to rush anywhere. I knew I was camping somewhere on the shores of River Feshie; it was mid summer and I had no-one but myself to please. 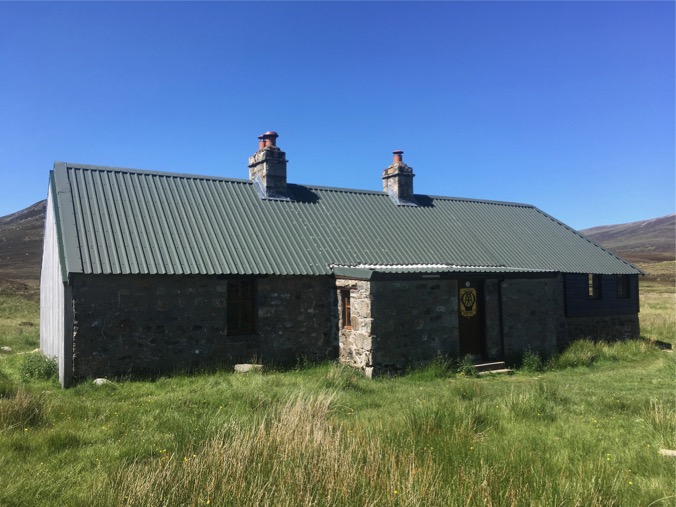 Crossing the Tarf Water was straight forward - might be more of a challenge in full speight. From there, my route involved more heather crunching, up the shoulder of An Sgarsoch, then on to its summit. I could see its neighbour Carn an Fhidhleir next door. Although there was clearly a fair bit of a drop and climb, it all looked on grass and none of the gradients looked too steep. And so the rest of my day proved to be more of a pleasant walk rather than a mountain climb. 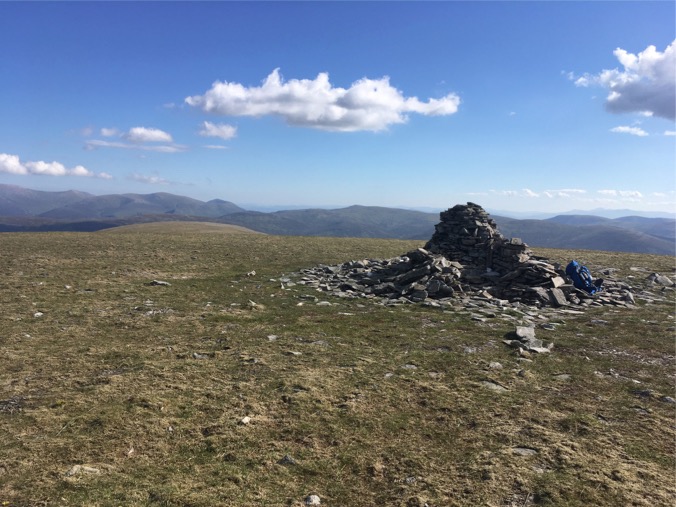 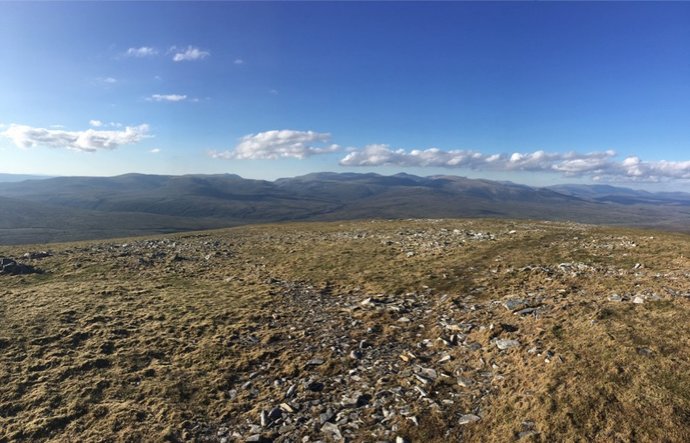 View from top of Carn an Fhidhleir, looking North

From Fhidhleir, I could see there was a stalkers path beginning half way down the shoulder, however I couldn't see it. I eventually found a very rough, boggy track. It didn't make much difference to the pace of the journey. I headed towards the south bank of River Feshie. I kept walking until I found a nice, grassy spot to camp for the night. The midges were out late evening, but not in such significant numbers to spoil my tranquility. I hadn't seen a soul since Blair Atholl. It felt bliss lying down to the sound of silence; miles from civilisation. 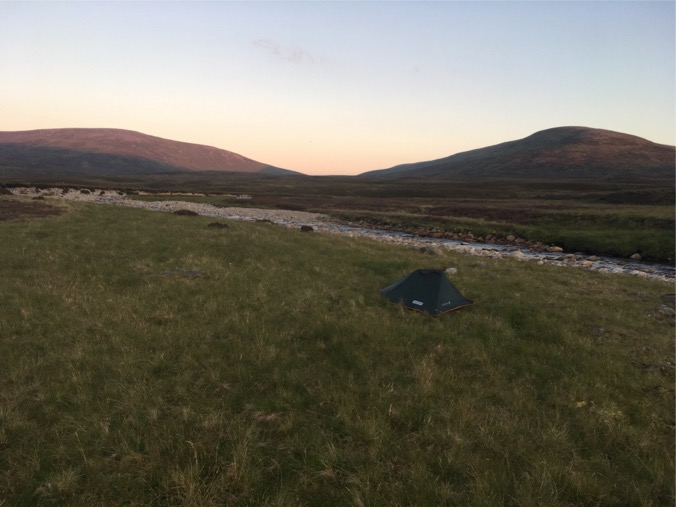 Camping by River Feshie. An Sgarsoch & Carn an Fhidhleir in the background

I knew my wife had booked us in to a hotel in Newtonmore so I didn't want to have her hanging around waiting for me at Glen Feshie. So I made an early start at 6:30. I tramped through more bog and heather to find the stalkers path that led to the footbridge. It was then on to Mullach Clach a'Bhlair. The map shows a land rover track starting mid way up the slope. I headed of to find it from the path that ran along the north bank of Feshie. This part of the route involved the biggest stretch of peat hags. If it wasn't for the fact it was a beautiful morning and I was enjoying the bliss of walking in sunshine, then this might not have been enjoyable. Add to that, it was clear by the shape of Mullach Clach a'Bhlair lying ahead of me, this was not exactly the most exciting Munro to climb. It can best be described as the highest point of a plateau. Once the ridge is reached, you walk on a well maintained 4x4 track. In fact, much of the morning was to be spent walking on this track, since it led most of the way to Sgor Gaoith. 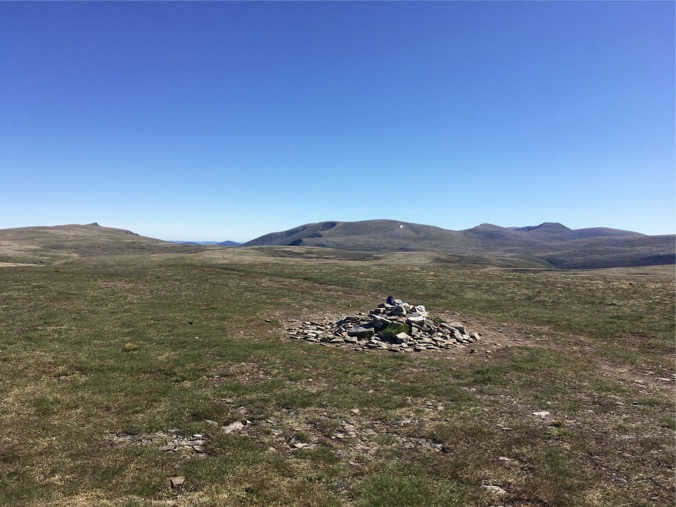 With a bit of undulation, I spent the next 2 hours walking across to Sgor Gaoith. It was only the last couple of hundred feet that I gained any sense I was actually hill climbing. Once reached, you get the thrill of its steep drops. It was here, I met the only other walkers of my 2 day trip. 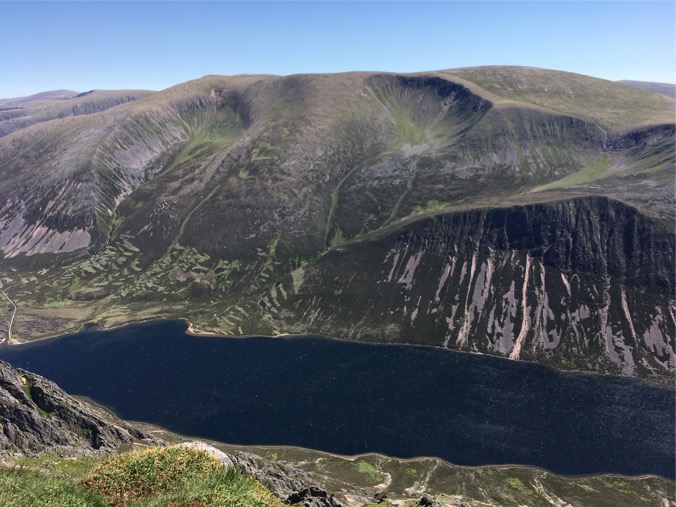 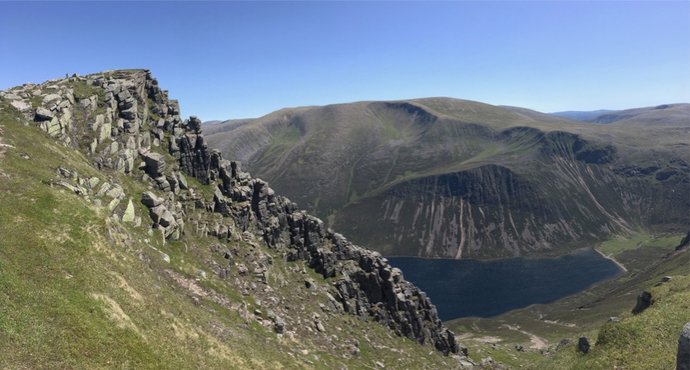 From the top of Sgor Gaoith, I descended immediately north. I could see the start of the path that led eventually to the Auchlean road. My wife was waiting in a small car park just before Balachroick.

Re: Glen Tilt to Glen Feshie

Nice wee trip in pleasant conditions....fine clear images.
A wee mix-up with the cairn of Mullach Clach a' Bhlair and that of the labelled Sgor Gaoith.