After reading so many wonderful and useful reports that have been posted on walkhighlands we thought it was time for us to create our first one!

We drove down to Aberfeldy on Tuesday the 6th of July and had booked a 2 night stay at the Townhouse Aberfeldy (which was superb and we highly recommend!)

therefore we decided to walk up Schiehallion, Stuchd an Lochain and Meall buidhe (Glen Lyon) on Tuesday and the Glen Lyon 4 on Wednesday.

Thursday's weather forecast was looking promising so we decided to attempt the Ben Lawers 7 from Camusvarachan because we only had 1 car. A short while after passing the house we took a right off of the land rover track onto a less defined path. We reached a gate which we passed through and continued on the path. We followed the path up the left side of the river, passing a waterfall and eventually bit the bullet starting our ascent to our first summit of the day - Meall a' Choire Leith.

For me this was the most difficult part of the entire day. I ended up using more than half of my water supply We decided to try and take our mind off the long slog by identifying large rock milestones to reach - like this one... We eventually reached an opening in the fence at about 800 - 900m up which was our final resting point before reaching the summit.

We were amazed at the spectacular view across the Ben Lawers range when we reached the summit of Meall a'Choire Leith.

After reaching the summit, we took a couple of photos and then made our way across to munro number 2 - Meall Corranaich which can be easily seen on a clear day which we like The path to Meall Corranaich was well defined and easy to follow. After around 25 minutes we reached the summit of Meall Corranaich.

We then decided to descend Meall Corranaich in order to walk up Beinn Ghlas. The walk down was pretty steep but manageable.

We eventually reached the bottom and started on the gentle looking path across the hill which we thought was heading up Beinn Ghlas...... (The 2 blue stones behind us were not ours) The path from Beinn Ghlas to Ben Lawers. After a short break at the top we decided to head for An Stuc which didn't look too far away. Looking back to Ben Lawers from An Stuc.

however the descend didn't last for too long and we were on our way to Meall Garbh. Alan with An Stuc behind him, it doesn't look as steep as it felt.

We carried on up to Meall Garbh where mist was starting to creep in, making us feel uneasy...... Alan nearing Meall Garbh with the mist setting in. 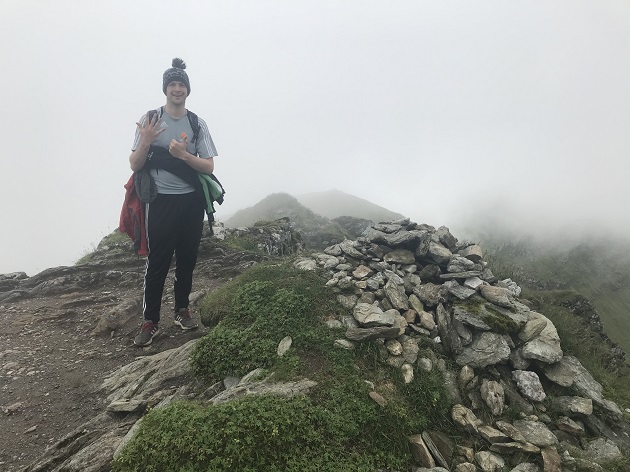 We sat at the summit of Meall Garbh for 15 minutes contemplating whether we should go for Meall Greigh or head down as we had read it was a boggy long walk.

It was fantastic to see quite a clear path all of the way from Meall Garbh to Meall Greigh. We had 2 options to get back to the car, option 1 was to retrace our steps back up towards Meall Garbh which would include a fairly lengthy climb to then identify the exit route down the hill.

Our 2nd option was to retrace our steps until we were at the lowest elevation point between Meall Greigh and Meall Garbh and turn right, down towards the forest in the distance alongside the stream.

We chose option 2 which started out quite nicely but the further we got down the more tricky it was to pass through the heather, nettles and boggy patches This was where we took a right and climbed over the fence at the lowest elevation point on the path between Meall Greigh and Meall Garbh.

By this point my feet felt like they were broken and every step felt like I was rubbing my foot along sandpaper.

There is not a path down this route however as it was very good visibility we could clearly see where we were aiming to get to. This is where we could see a path.

After what seemed like forever we reached a stony track which lead us to a small bridge over the stream. Bridge over the stream.

After we crossed the bridge we took an immediate right which lead down into the forest. The forest walk was quite steep but doable. At the end of the forest there is a gate to open and then we turned left back onto the landrover track that we started on but just much further over.

Users browsing this forum: Barry in the hills, Norman64 and 117 guests