Looking though Walk Highlands at local walks my attention was caught by Mealna Letter, but given the rain perhaps a boggy route was not going to be the best option and a nearby hill caught my eye - Badandun. The map suggested there was a track right up to the summit and there was the option of a visit to Auchintaple Loch as well. Hill and a swim for Moss, sounds ideal! 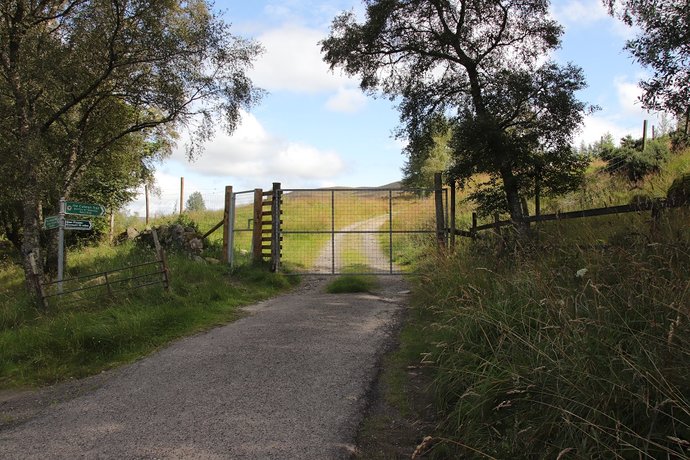 The gate a signpost at the start of the walk.

There is limited parking in a layby near the gate at the start of the walk, there is a signpost here for the Cateran Trail, but there was only one other car there when I arrived so no problems getting parked. We set off passing through the gate initially following the sign for Kirkton of Glen Isla. Views quickly opened up across to Forter Castle with Mount Blair towering over it, and the Mealna Letter with the Glenshee hills behind. 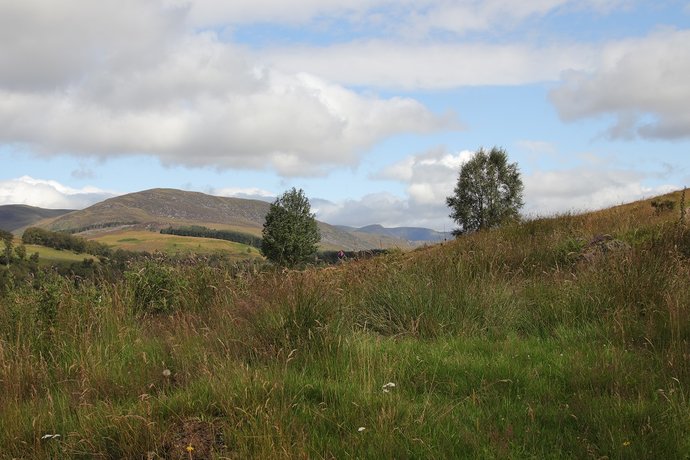 A couple of trees on the hillside

At a small, young woodland the track splits with the main track curving round to head to Auchintaple Loch - which we visited on our return - our route though stayed on the Cateran Trail following the track that ran alongside the woodland that was filled with birds. A wren family crept around in the undergrowth around the fence and a willow warbler kept just enough of a distance to avoid getting a decent photo taken! From within the woodland were various other bird calls, but they were difficult to spot in the branches. 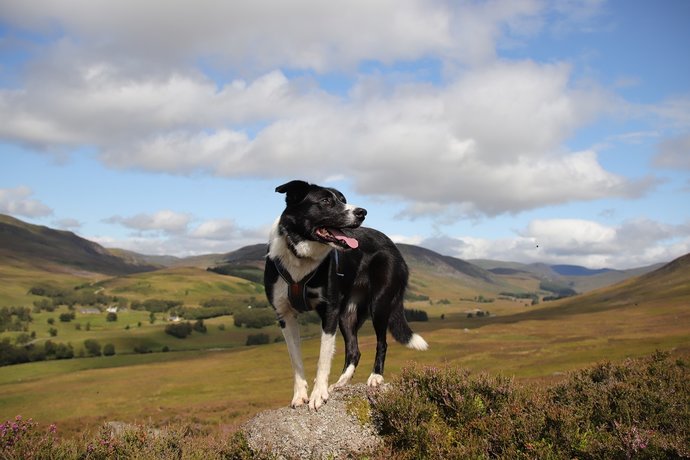 What have you seen?

Away from the woodland the track led to a gate with a stile, the gate opens making it easy to pass through with a dog and the track continues to lead on gaining more height. At a fork there is a marker post for the Cateran Trail. This is where we leave the trail taking the left fork, the visible track winding up the hill. It starts off grassy but becomes stony again further along. 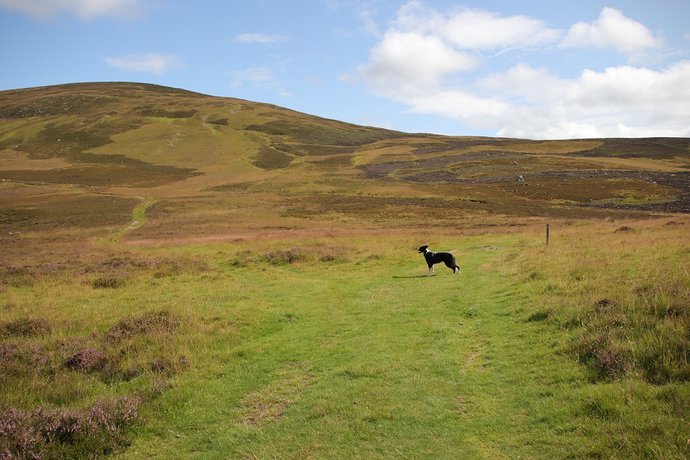 Our track is the one to the left, leaving the Cateran Trail.

The views on the ascent just keep improving, though there was one slight problem...swarms of big black flies that soon appeared when we stopped for a photo. I didn't take any chances to find out if they were a biting type of fly or not, we were off! Higher up though the flies became scarce and we could enjoy looking at the views without being surrounded. 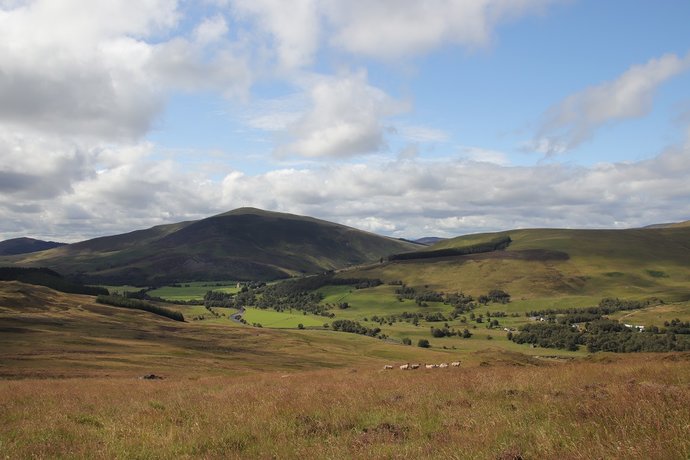 Looking back the way we came, Forter Castle just visible. 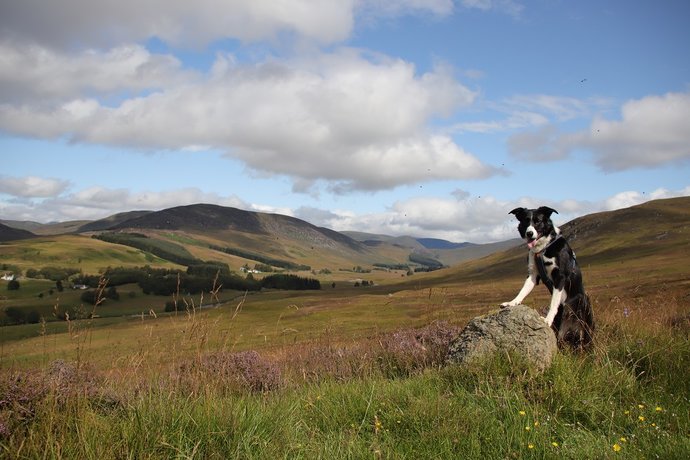 The track leads steadily up towards the summit of Badandun passing close to the trig point but a nearby cairn we reached first caught our attention first, the views were also better from this spot across to Glenshee and down into Glen Isla. With a round stone making a "head" and sticks making "arms" it was like some kind of rock robot

Moss found it very interesting, and I had to stop her stealing one of the arms! 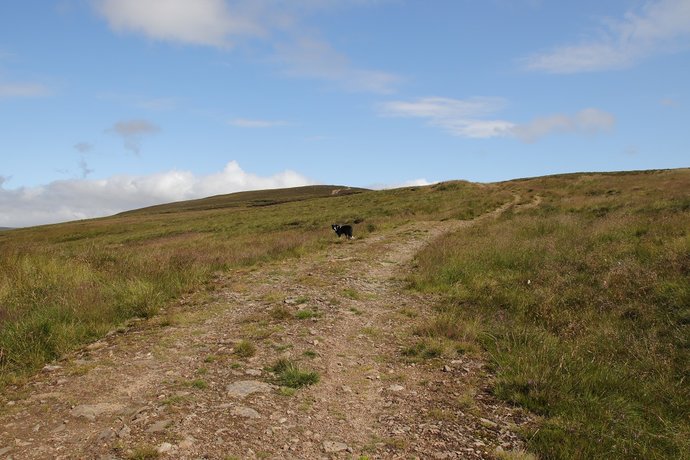 Clear track heading towards the summit 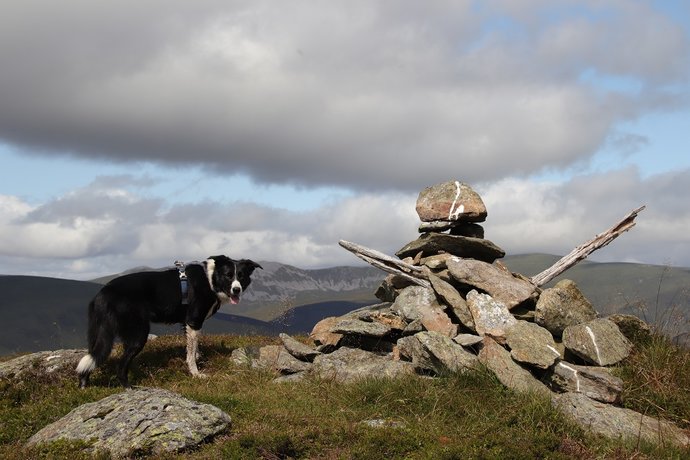 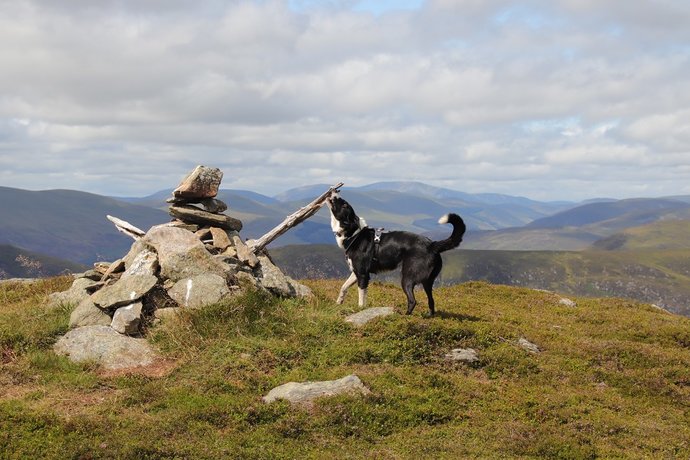 Prepare to be disarmed! 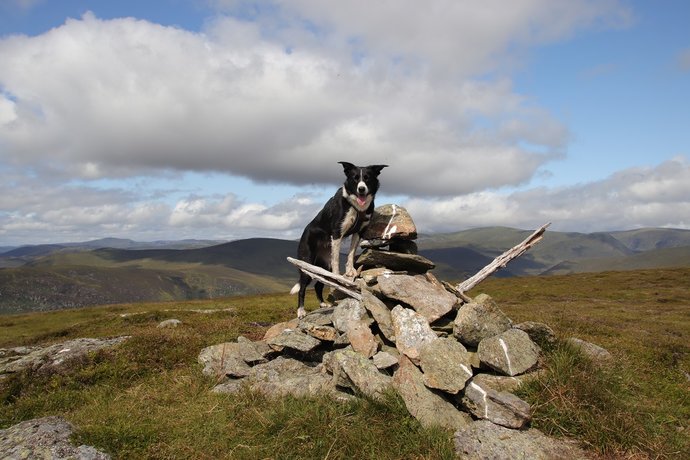 Another one with the rock robot, just because! 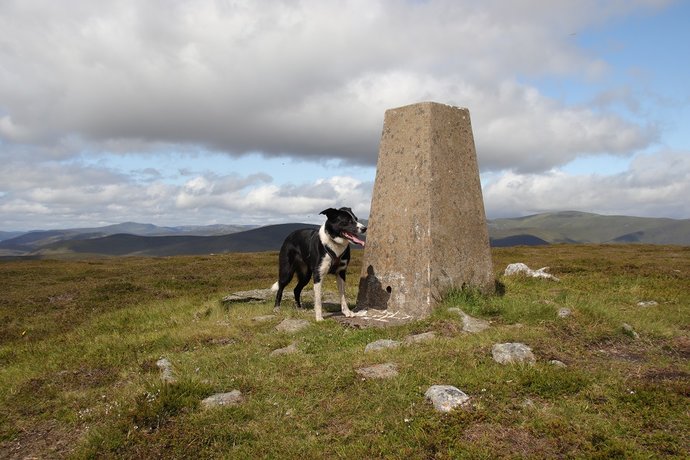 The trig point is a bit less fun!

Perhaps not surprisingly, we had this summit to ourselves having seen no sign of any other people at all. Returning to the track we continued to follow it. Soon it became a fresher newly bulldozed track, the remains of the old track still visible to the side. The views were a less appealing on the descent with the opposite hill scarred with the track and a grey patch of freshly felled trees on the other side of the glen. There are a few options of ways to descend, one heading up the opposite hill and then taking the clearly visible track down the west side of Badandun, but our track forked off to the right taking us along the east side. 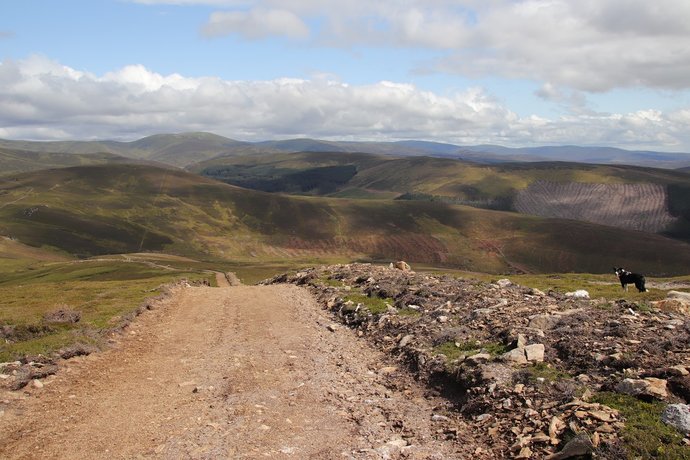 The bulldozed track heading down

The fairly steep descent resulted in a relatively flat walk along here with several burns flowing down. At a ford, a wide wooden bridge makes for an easy crossing. Ahead, Mount Blair came into view with rain falling on the hills behind. The rain though stayed over there despite the darkening clouds. Clear track all the way

It was easy walking, Auchintaple Loch coming into view soon after reaching a wall with a gate. No need to open the gate, there was a big opening just to the side with just one bit of wire fencing above. From here the track led down to rejoin the Cateran Trail. Following it to the right, we were soon at the point where we had turned off for the ascent heading back down to the woodland. Once on the other side, we diverted to the left to visit Auchintaple Loch. It was here we saw our first - and only other - person on the whole walk, someone fishing in a little boat on the loch. 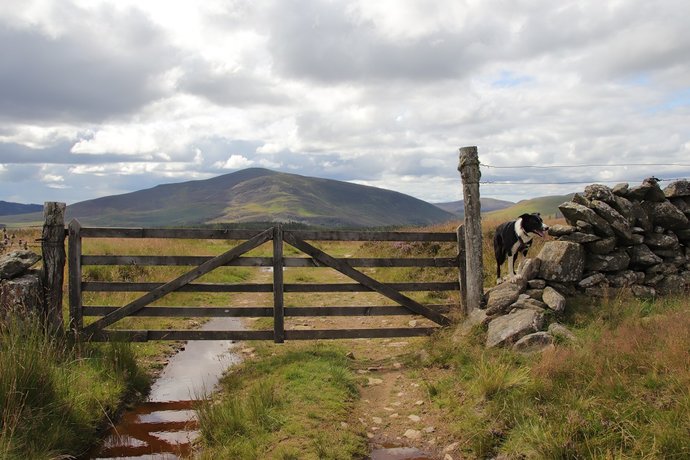 Easy way to get round this gate! 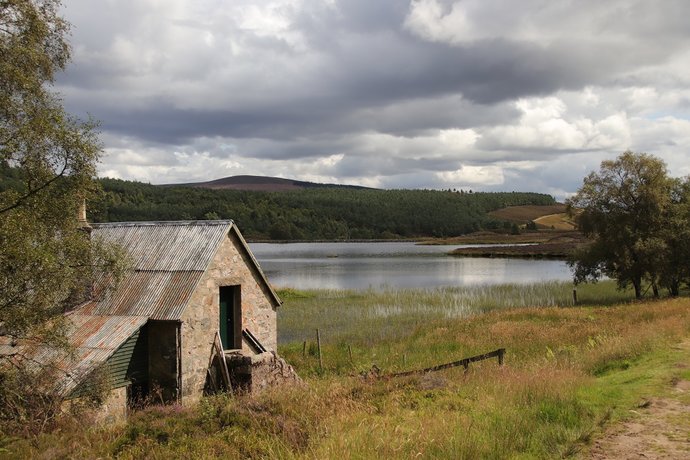 Auchintaple Loch and the boathouse

We stopped by the boathouse where Moss had a swim, the water beautifully clear. I spotted a family of little grebe some distance away, the parents busy finding food food for their fluffy chicks. After a few swims, we headed back the way we had came following the track back to the car. A very enjoyable walk and one that I'll return to to explore the track on the west side which I suspect may be the nicer walk back, or the nicer route to use as the ascent track allowing for a stop at the loch on the return! 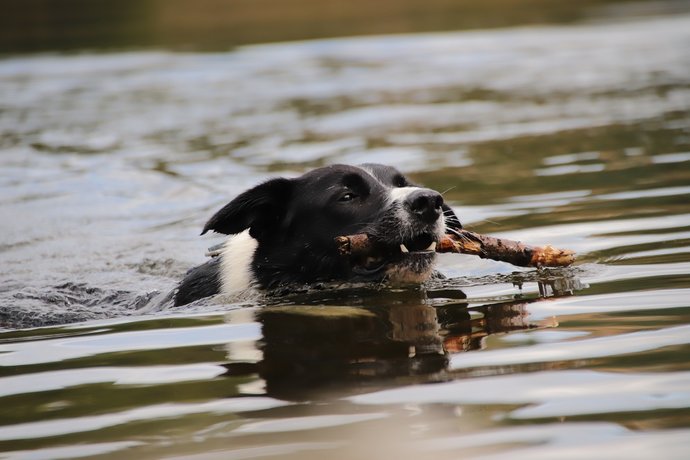 Time for a swim!

Repeated this walk today only instead of following the track to the right at the fork after Badandun Hill we went to the left staying on the main track towards Craig Lair and down to Fergus. I'd originally intended to follow the track by the river, but early on the way up spotted cattle on the track, so at Fergus I crossed the bridge for a long walk back along the road. Not the most exciting return, but the cows were still on the track and I really don't like having to get around cows especially not with two dogs 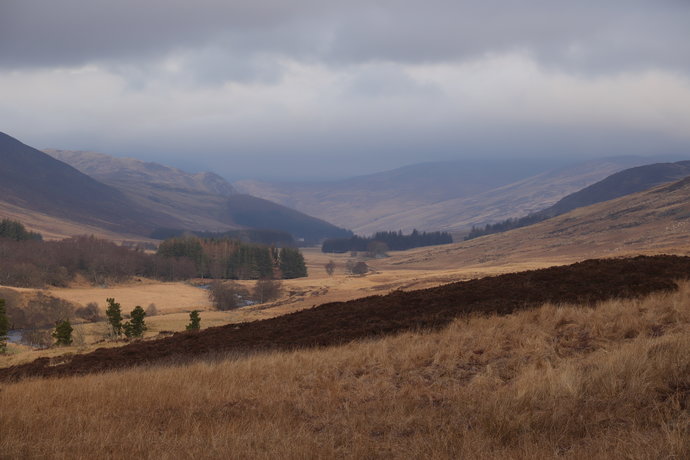 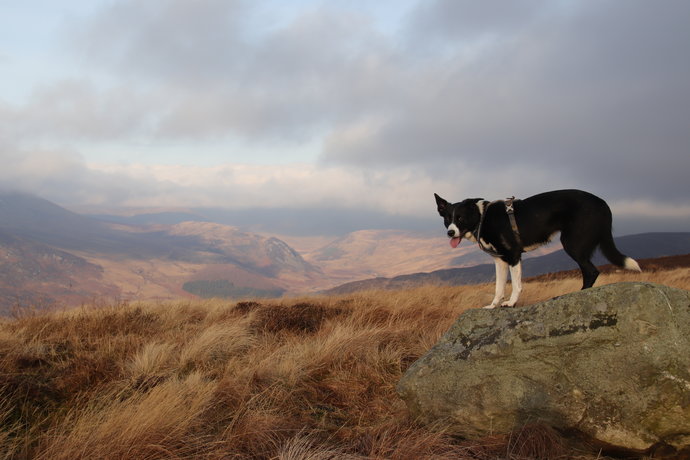 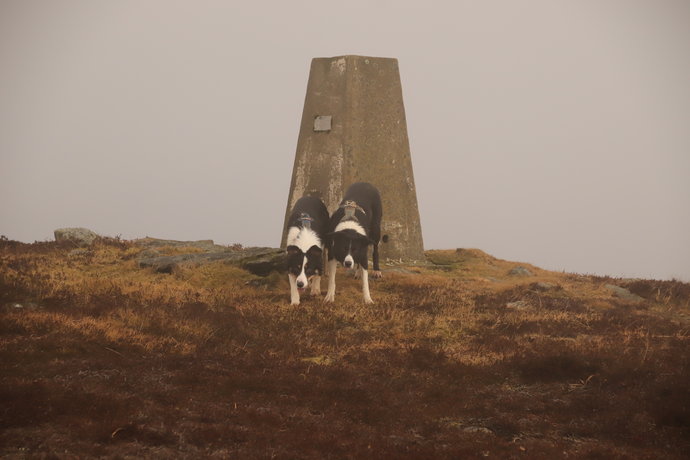 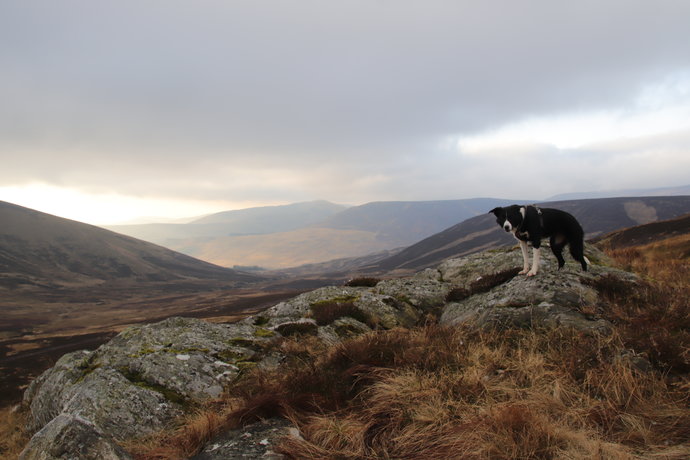 Great photos Kat Tai. Looked like 2 good days even with the cattle dilemma.

Did this hill (again) about a month ago when there was a bit of snow around. It's always a nice winter walk with a small detour to add in Auchintaple Loch.