This was a walk that was almost cancelled at the last minute, but the forecast turned out to be correct and better than expected. The Met Office's early morning rain was pouring when I met Jaywizz and led to a discussion over coffee on whether to abandon our walk. The rain however was fading by quarter to ten and that encouraged us to drive up the B934 into the Ochils despite the low cloud.

We stopped in the parking area 200m south of Corb Bridge and in 100m visibility and slight drizzle we set off along the track leading northwest into Corb Glen. Within half an hour it was dry, though we were still in the mist. Two kilometres later and a short distance over the watershed we turned south towards Sim's Hill. Pushing through the long wet grass we were grateful that we were wearing overtrousers. As we aimed for the bealach between Sim's and John's Hills we found a sheep track that followed an old and now disused hill track. This led to a similarly disused gate at the fence on the col. From there a path zigzagged up Sim's Hill to its rounded grassy summit near where there was a taller post in the fence. 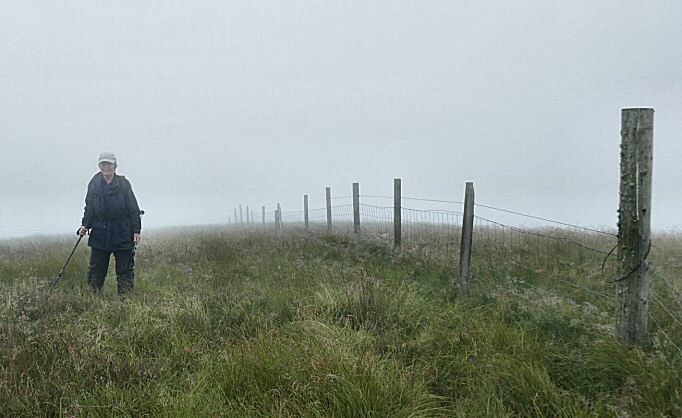 Jaywizz on the summit of Sim's Hill

By now it seemed to be getting brighter, but there was still no view. We reversed our steps to the col and then re-ascended the 73 metres we'd descended to gain the summit of John's Hill - no sheep track up to it. 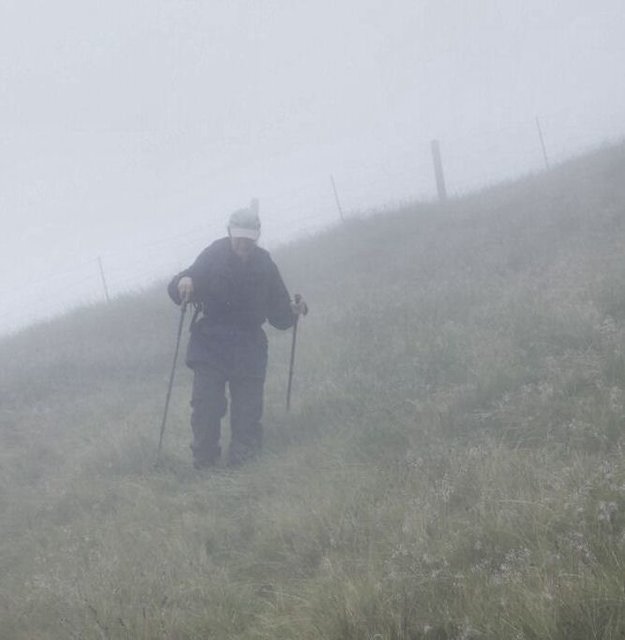 Heading back down to the col

This is reported to have a 30m diameter ring enclosure probably of bronze/iron age around its summit. It might be visible from the air with snow highlighting it on the ground ( https://canmore.org.uk/collection/1509971) but not when there on the ground in cloud. The summit isn't obvious either. As we stood on the summit's NGR (NO 00139 08099) the mist cleared for a short time and we saw as far as the next hill - just. 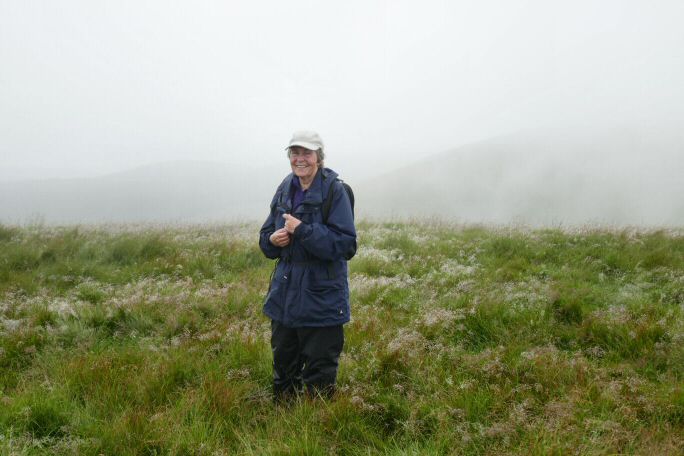 A brief clearing while on top of John's HIll

On the way back down into Corb Glen it cleared more, patches of blue sky became visible, and by the time we were back at the car there was even some sunshine. Looking towards Lamb Hill (probably) as we descend into Corb Glen

The Met Office had predicted that there'd be dryer weather for two or three hours from 10am and they had been right! Later they were correct again when almost continuous rumbles of thunder followed by torrential rain arrived after we were safely indoors. It had been a fine outing made more so by our timing slotting into the only reasonable weather of the day. For more photos and Jaywizz's explanation of "The 'Newtons' - best traverse of the Ochils" see her blog.