For these three Munros, I had plenty of time. I took the train from Spean Bridge to Corrour at 7:57 am, and the return train wouldn't go before 9:20 PM. There was another train in between in the early afternoon, but it was clear from the start that I wouldn't make it in time for this one. I didn't mind and was already looking forward to a nice dinner in Corrour Station House, where I had dined very well three years ago.

The train was full of kids talking to each other in English, German, and French. Even though I'm quite fluent in all three, I couldn't figure out what their native language was - possibly it was a mixed group, and all spoke in all three languages. I liked that. That's Europe, to get a little political here...

The group of kids did not leave the train with me in Corrour, but a group of Dutch (adults) did - and disappeared in the restaurant to have breakfast. I had already had mine and started right away as the only hiker of this train. 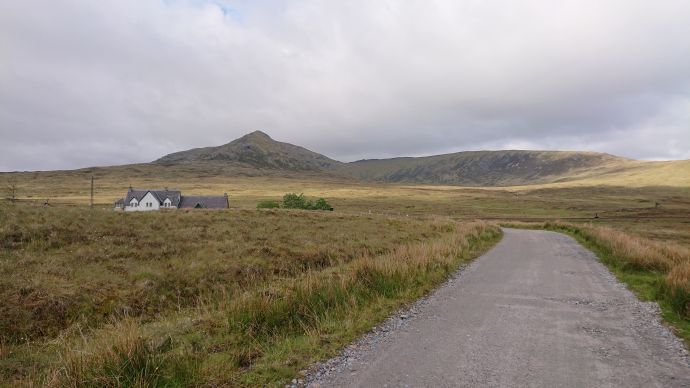 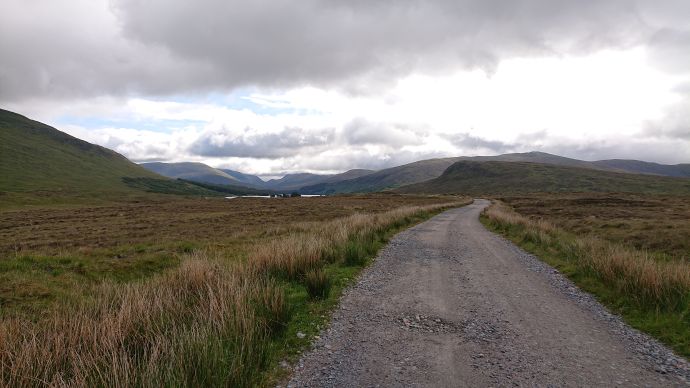 The weather forecast wasn't great - lots of wind, showers rather sure than only possible. When I walked along the good track, the conditions were still very good for walking, though. I soon reached Peter's Rock, that's how far I had come three years ago.

Panorama from Peter's Rock: Beinn Na Lap behind Loch Ossian, the Grey Corries visible above the left end of the Loch. Click to see large.

From there, the gradient up the slopes of Meall Na Leitire Duibhe was comfortable to walk. A startled grouse startled me by flying off a short distance from me - the only grouse I would see this year. From half-way up the slopes, I noticed 4 persons on Meall Na Leitire Duibhe. Although they seemingly walked more slowly than I, I could not catch up with them, and they were nowhere to be seen as I arrived on Carn Dearg's summit.

The sky had cleared a bit, patches of blue were visible between the clouds. Still, it was very windy. The forecast had predicted winds up to 50 km/h, and it surely wasn't much less. Temperatures were near freezing up there, and as so often I was glad I had my gloves and headband. In the surprisingly good shelter behind the summit Cairn, I had a bite to eat and, as on every summit, I performed my Secret Summit Ritual. 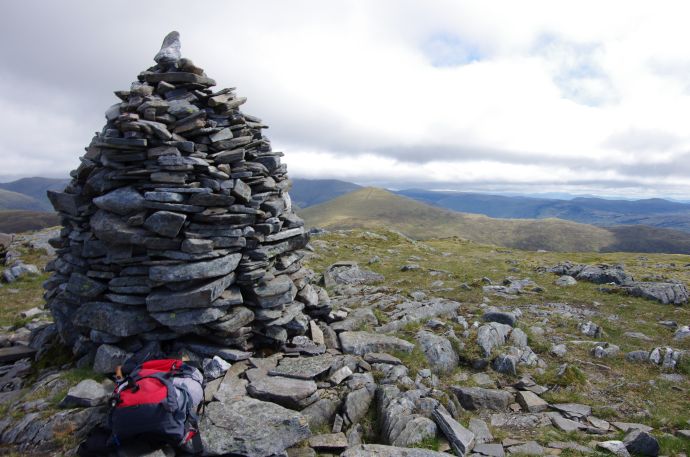 As I wanted to set out again, suddenly the group of four emerged from below the summit, where they had had their tea. I wondered if they had heard me performing the summit ritual - the dark chants of

Just joking - I had read too much H.P. Lovecraft before leaving for Scotland...
The four were seemingly two couples, and they told me they were from Ayrshire, or even from Arran, oh my memory... What I can say for sure is that they were definitely very nice - and fast. After some smalltalk, they outdistanced me quite quickly on the descent to Màm Bàn. 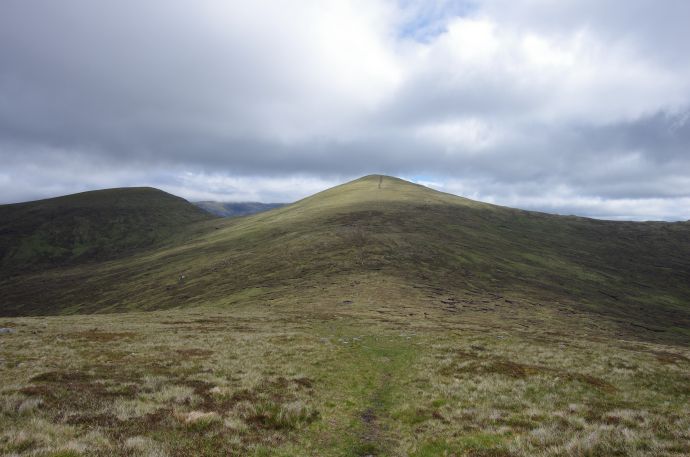 There, they had to re-organise their backpacks, and I took the opportunity to be on Sgòr Gaibhre before them to perform my next Secret Summit Ritual before they arrived. At least going up I was still faster than them - which may have been due to possibly more than one decade of age difference. Still, they arrived soon after my ritual had ended. We had another nice chat, and they wished to have a group photo with me in it, which I did not deny them (these are very rare!). 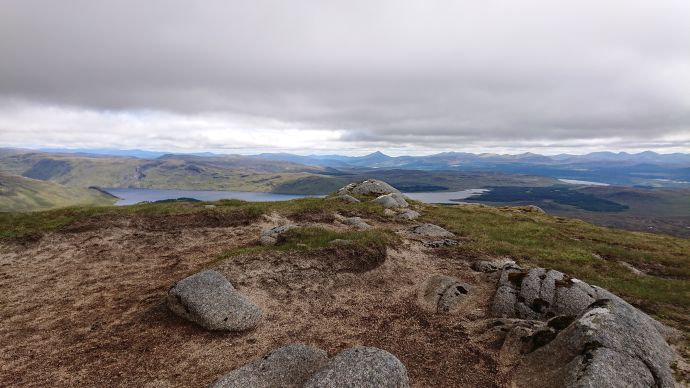 While the group had their lunch near the Bealach Nan Sgòr and intended to bypass Sgòr Choinnich, I made the short detour to include this top. On the way down to the Eastern end of Loch Ossian, I did not find the gate in the fence. I went back a bit around the edge of the forest, where the fence ended - but there was no getting through the trees. Back again. I saw the four again, waving to me from behind the fence. Where had they crossed? Solution to the riddle: they had climbed over it and advised me to do the same. Luckily, Scottish fences are strong and stable... It looked like quite a new fence, but without stile or gate, and my new friends, member of a rambler's association, wanted to do something about it after their return. We walked together across the boggy section up to the track and had a last chat on the bridge across the River Ossian. There we said goodbye, as they would return to the SYHA along the southern end of the loch, and I would go north to attack Beinn Na Lap. Possibly we would meet again at the station house for dinner.

The path through the forest along the Allt Loch Na Lap is not marked in my OS map (and the paths and forests around Corrour Shooting Lodge are not that accurate either...), but I found it easily enough (behind a fence and cattle grid, both not marked in the map). 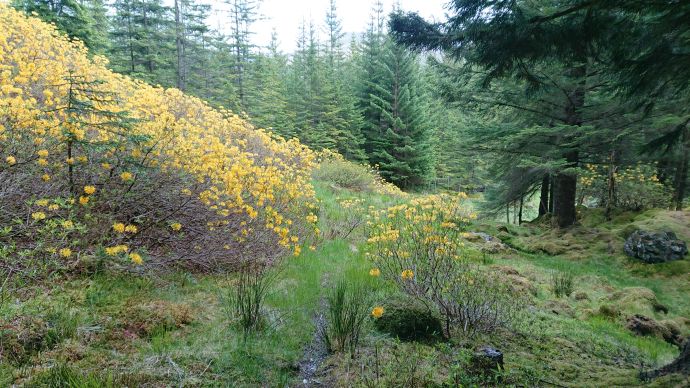 The path through the forest 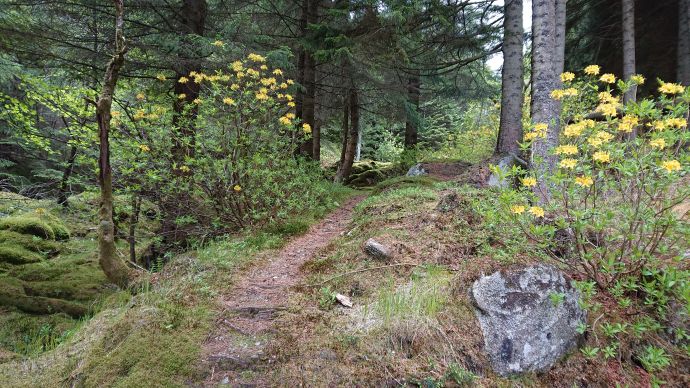 Nice to walk on

I chose to ignore a first bridge across the Allt Loch Na Lap in the forest, and followed the path all the way to the end of the forest, where there was no more fence as opposed to the one marked in the map. Luckily the bridge was still there. 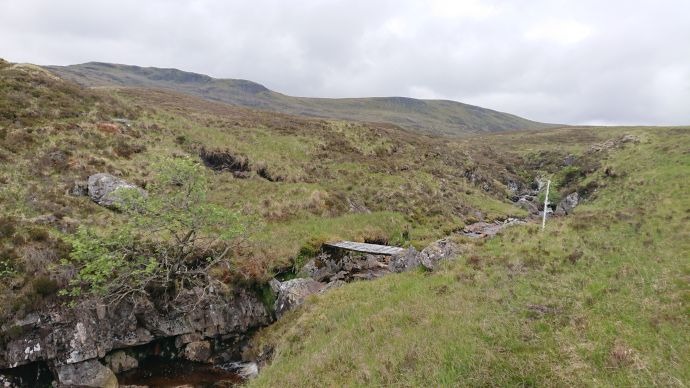 The ascent up Beinn Na Lap was cumbersome, and possibly I chose the most inconvenient and steep route. The terrain was boggy, many trenches were to cross, and lots of tussocks made for slow progress. 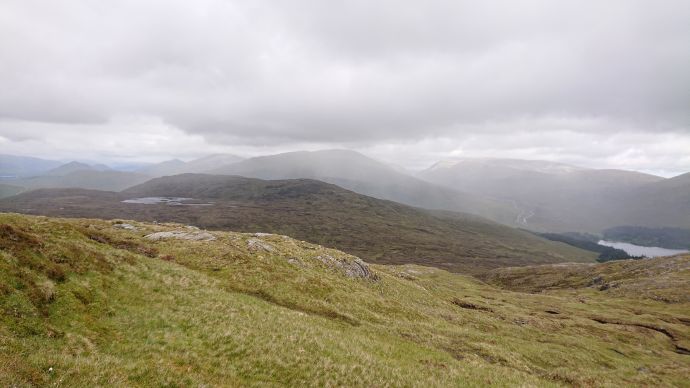 Looking towards Ben Alder from the slopes of Beinn Na Lap

The very last part was so steep that I wouldn't dream of ever going down that way... 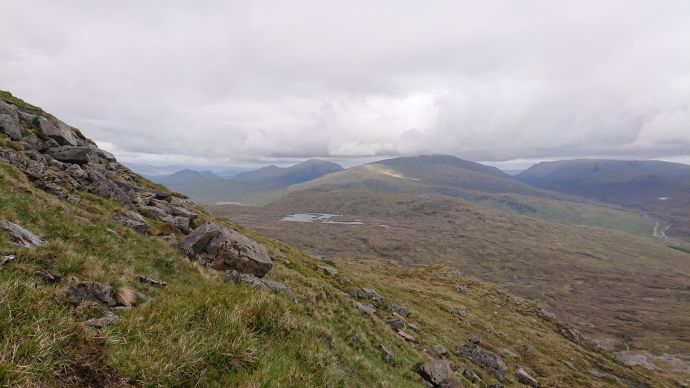 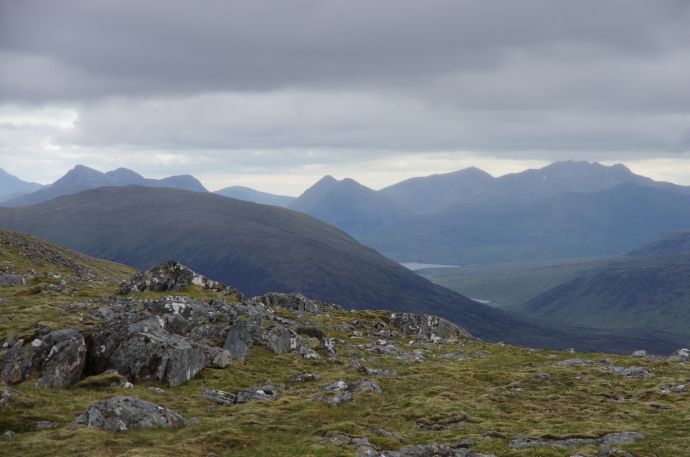 As it looked very much like rain, I did not spend much time on the summit. 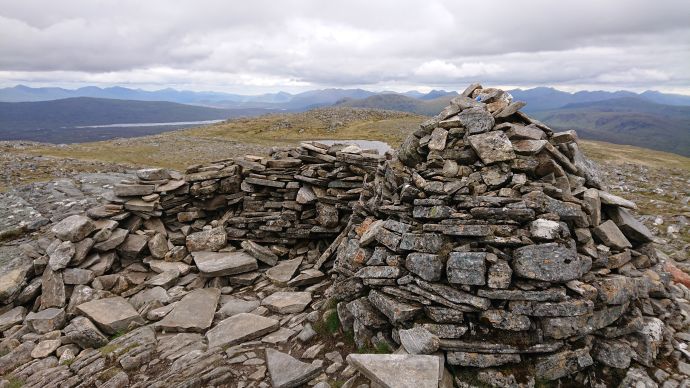 The descent seemed much shorter than the ascent, which I wasn't too unhappy about. Rain set in and accompanied me all the way back to Corrour Station. 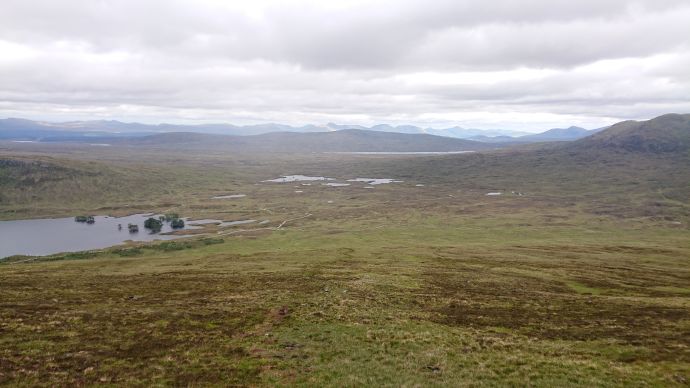 View across the vast emptiness towards Blackwater Reservoir. Corrour Station only a tiny dot. 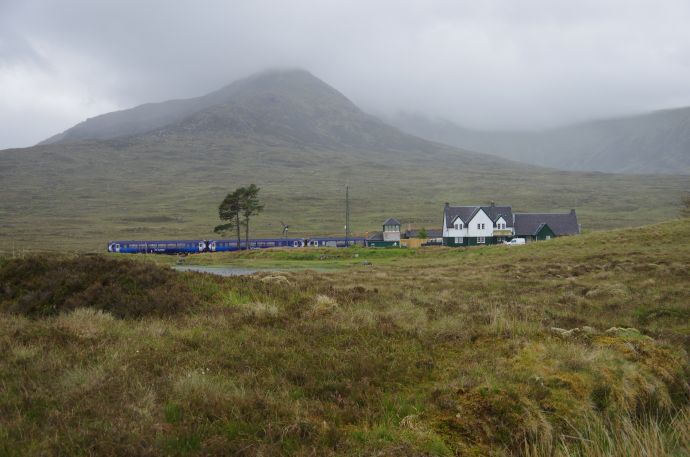 Finally back at the station, and no, this was not my train...

At Corrour Station, I met the group of four again who were already having dinner, and soon enjoyed my own well-deserved and good dinner. The hours until the train arrived passed quickly writing my walk diary and chatting to some of the other people waiting for the last train.

20190611_korr.gpx Open full screen  NB: Walkhighlands is not responsible for the accuracy of gpx files in users posts