Saturday, the main day of WH Meet, didn't start very promising - low cloud and little perspective of views from higher tops. With a good forecast for Sunday, we decided to delay our scrambling expedition to Beinn Fhada and instead, revisit an easier Corbett, Sgurr an Airgid. We had done it before (early spring 2010 in winter conditions) but didn't see much from the summit. Today, one would think, not much chance to catch any views either, but we were lucky in the end.
There is very little room to maneuver, when it comes to plotting routes for Sgurr an Airgid. Any kind of traverse would involve a lot of unfriendly terrain, so we stuck to the standard ascent/descent procedure, the good stalkers path from Strath Croe:

Track_SGUR NA AIRGID 11,5 KM.gpx Open full screen  NB: Walkhighlands is not responsible for the accuracy of gpx files in users posts
There's a good car park next to the Clachan Duibh burial ground: The path starts from the gate at the opposite side of the road, leading steadily uphill, first through some trees and shrubbery, but soon it emerges on the open hillside. At the moment, it was still a gloomy late morning and nothing suggested the sudden change later on:

I was glad we delayed the traverse of Fhada. The western ridge was still shrouded in cloud:

As we gained height, we really appreciated the views east to Loch Duich and the surrounding mountains. The clag was slowly lifting and even Kevin (who still suffered a bit from his back injury) showed signs of optimism

The path is generally very good, a few short wet sections, but it offers an easy access to the main ridge: Looking down the gorge of Allt na Ruarach: The path emerges on the wide col between Beinn Bhuidhe 9an outlying top we didn't bother visiting) and the main summit of Sgurr an Airgid. A small cairn marks the end of the made-up stalkers saction... ...but the path continues, more or less defined, all the way to the summit. From the 582m wide col, we aimed due west, jumped over a few peat hags, before climbing another 250m up a mostly grassy slope: I was very happy with Kevin's performance, he outrun me on the way up. It looked like his injury was healing, though he was still complaining of a stiff lower back, especially after sitting on a rock for too long About 50m below the summit we walked into stronger wind, so it was time to wrap up: Beinn Fhada and A'Glas Bheinn, in a short moment of brightness. There was another group of Walkhighlanders on A'Glass Bheinn today and I wondered if they caught the gap in the cloud:

We reached the summit at 1pm, after a late start, and it turned out the right decision: the clag lifted and we were treated to reasonable views. Still some mist around the higher peaks, but we were out in the open

Since our last visit, the trigpoint suffered from either erosion or possibly a lightning strike. Lucy bagged her 102nd Corbett:

The WH route suggests the 500m detour to Sgurr na Seamraig, mainly for the views to the western end of Loch Duich and to Isle of Skye. We had plenty of time and weather was holding, so why not?

On the summit of Sgurr na Seamraig, Kevin went to work with his camera: 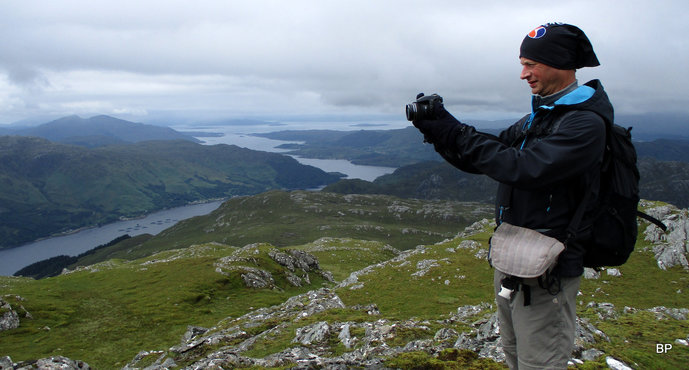 Looking in south-eastern direction from the subsidiary top:

South Skye on the horizon. Sadly the Cuillin Ridge was not visible today.

After a short tea and cookies break, we retraced our steps down the stalkers path. Weather on the way down stayed nice and we were treated to lovely views, when descending to Strath Croe: We were back in Ratagan early enough to cook our overspiced curry and settle down for the quiz with a bottle of stout. We might have not done anything big today, but considering the gloomy conditions in the morning, it still ended up a good trip