The 9 Fannichs with summit camp

The 9 Fannichs with summit camp

The Fannichs...to do them all in a day and finish absolutely destroyed, or to lug a heavy bag full of camping gear over the 9 Munros over two days and finish slightly less destroyed? I am so glad we decided on the latter option as the sunset and sunrise we were treated to was rather special!

Setting off about 1.30pm from the small car parking area near to Loch Glascarnoch, we started walking fairly briskly up the track towards the hills in an attempt to leave the usual car park midges behind. In fairness, aside from a few in the wooded area before the bridge, we hardly saw another midge for the next 24 hours. The long and boggy walk in towards An Coileachan lived up to the billing, thank god for my Scarpa leather boots! The cliffs and lochan ahead stopped me in my tracks and were a far more impressive sight than I had read about. After what seemed like forever squelching through boggy ground, we started climbing steeply up towards An Coileachan. 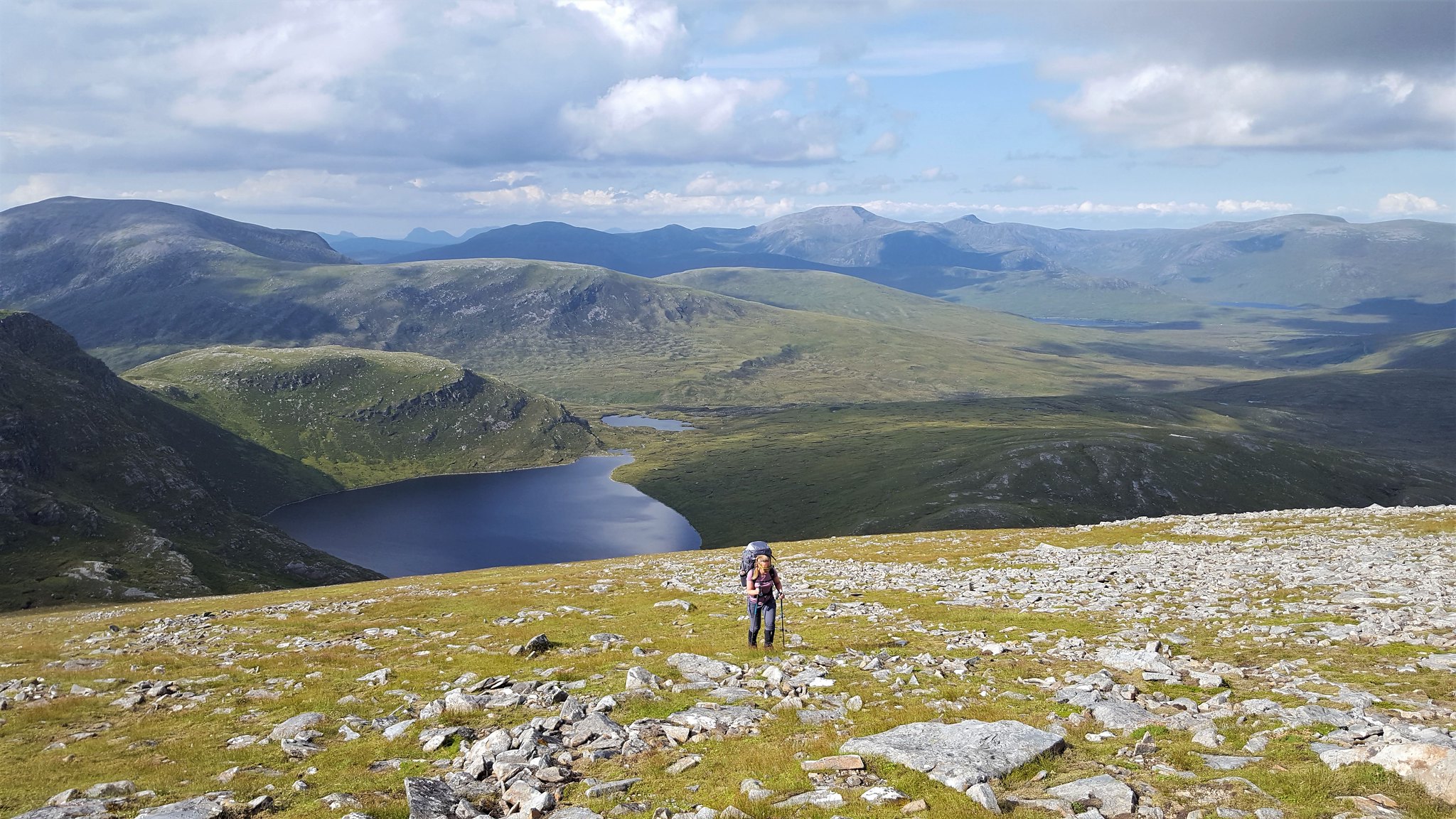 The views back towards the Beinn Dearg Munros were stunning, which we had completed in sketchy weather a month or so before. It was nice to see what they actually looked like! After 3 hours and 20 mins since setting off from the car, we reached the summit of An Coileachan, which offered up some great views and a daunting view of the 8 further Munros ahead! Sgurr Mor looked particularly impressive and high!

Moving westwards towards Meall Gorm was the next objective, which was very straightforward and did not take long. We did not waste much time on the summit as my plan was to reach Meall a'Chrasgaidh (Munro 5 on the route), pitch on the summit, have dinner and get ready for sunset. As we semi-faffed along the way, I realised this would be fairly tight for the 9.35pm sunset time. We encountered a chap walking towards us who said he was doing all 9 in the same day. He looked burst and said that he had run out of water a while ago, and still had about 3.5 hours to go...I was sold at this point that camping was the best option! 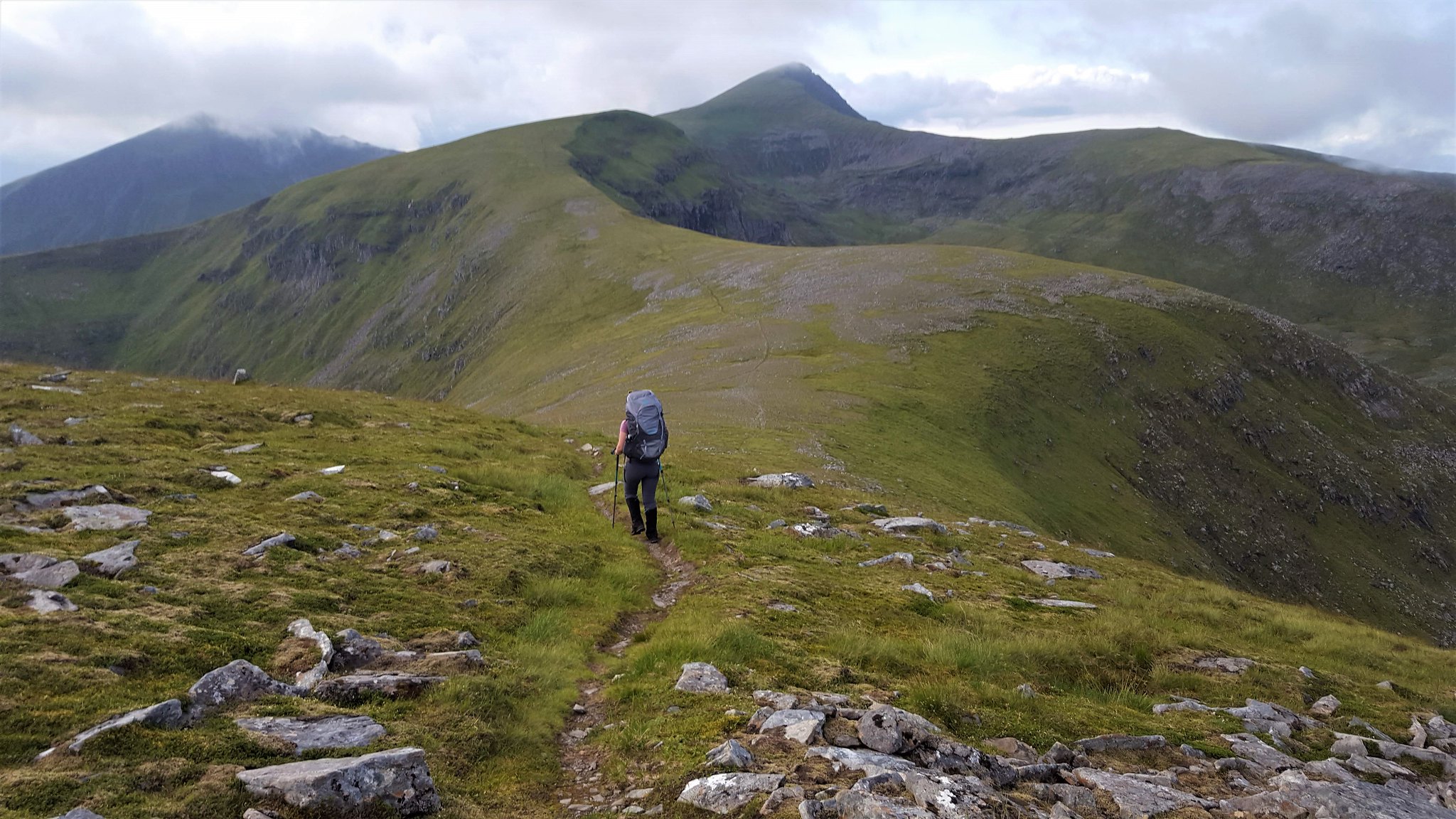 It was a reasonable distance from Meall Gorm, cutting across to the ridge from Sgurr Mor NE towards Beinn Liath Mhor Fannaich, our next target. Dumping the hiking bags on the ridge was a relief and a seemingly weightless trot out to our third summit. 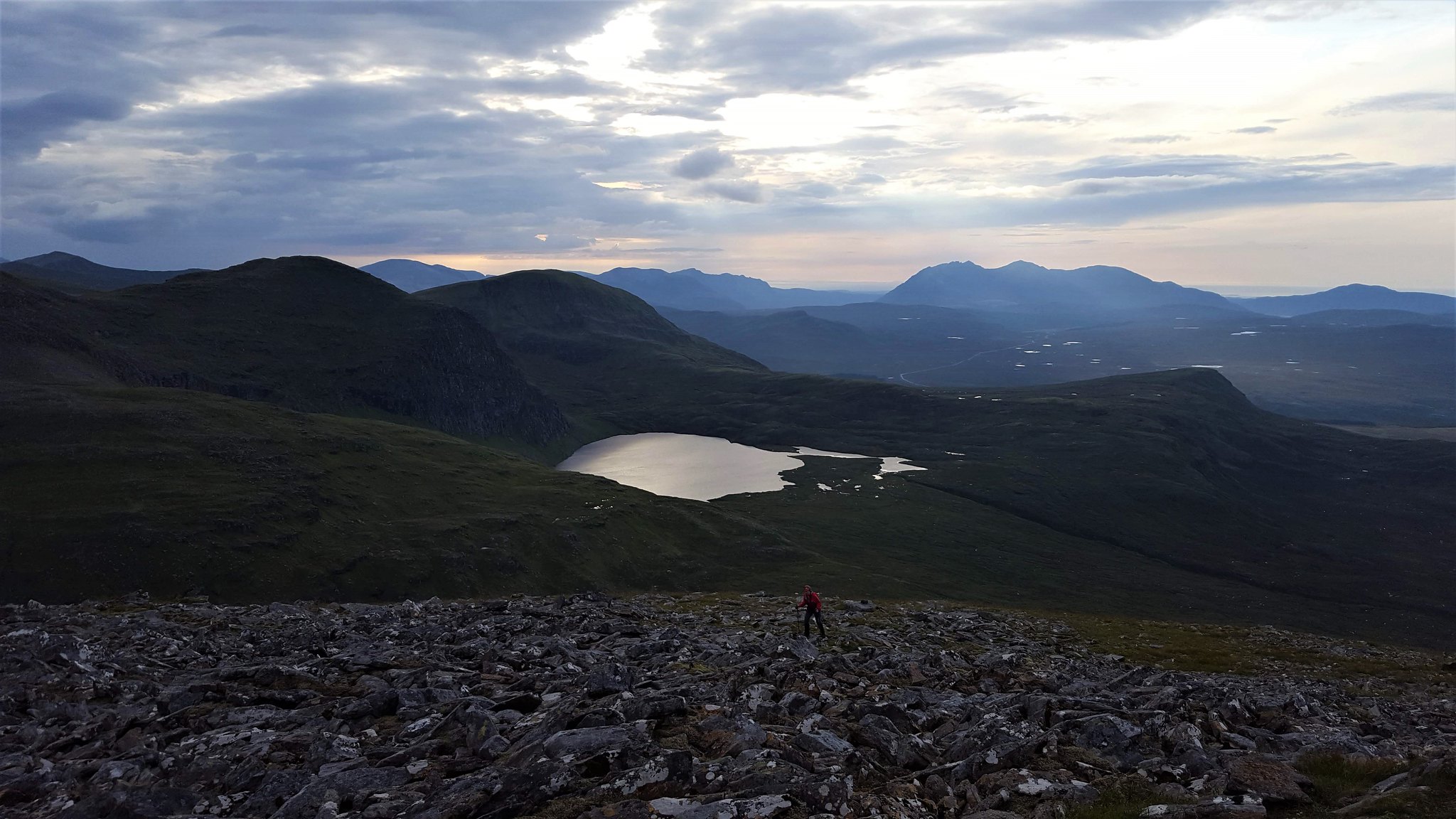 The view from the summit was fantastic, especially in the sharp evening light that we were lucky enough to have, at 7.50pm. An Teallach stole the show to the west, an absolute magnet to the eye, and Beinn Dearg was also impressive to the north. My stomach was starting to rumble, so we pressed on towards Sgurr Mor and a spot to pitch the tent for the night. I realised that my we would not have time to camp on our 5th summit, so hoped to find a spot on the top after summiting Sgur Mor.

Picking up our big bags again on the ridge to Sgurr Mor was brutal, it felt like someone had come along and lobbed a few bricks into both of our bags! Thankfully the views as we ascended the steep slopes of Sgurr Mor were just amazing, even more so as the sky was starting to glow a deep orange on the western horizon over An Teallach. I realised with excitement that the sun was going to set over the pinnacles of an Teallach! 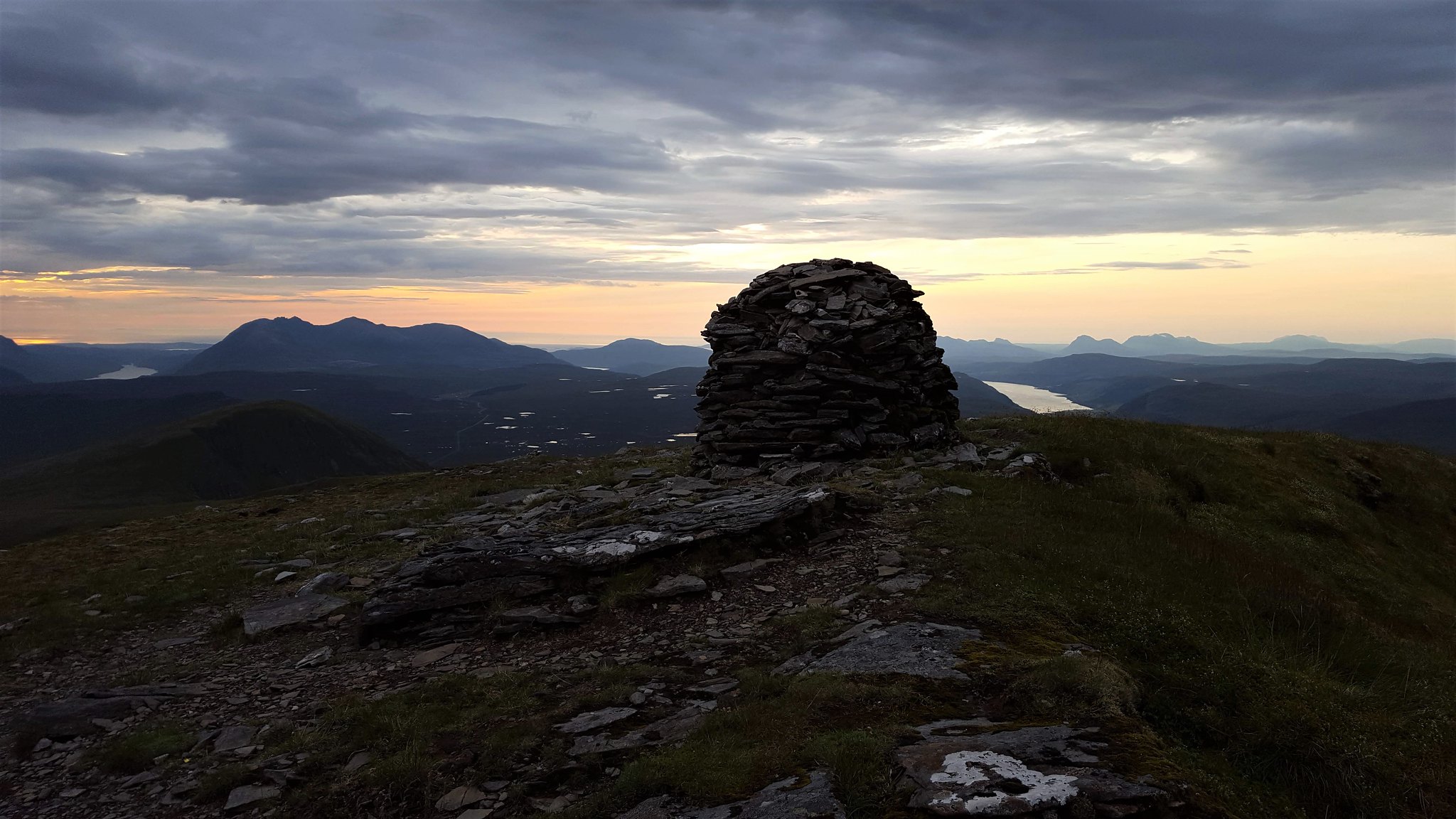 Sgurr Mor summit at 8.50pm, with the sunset starting to brew over An Teallach. 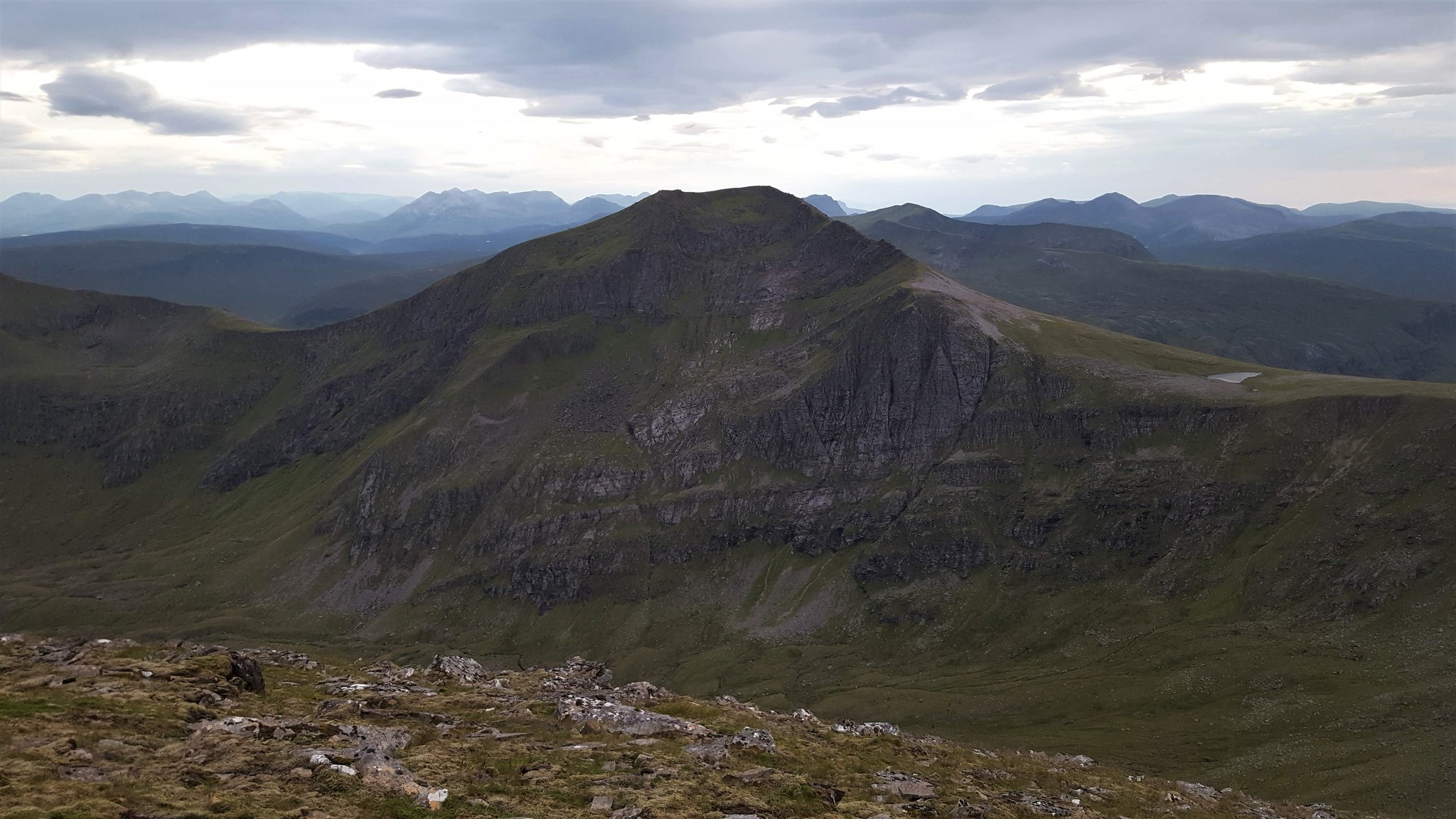 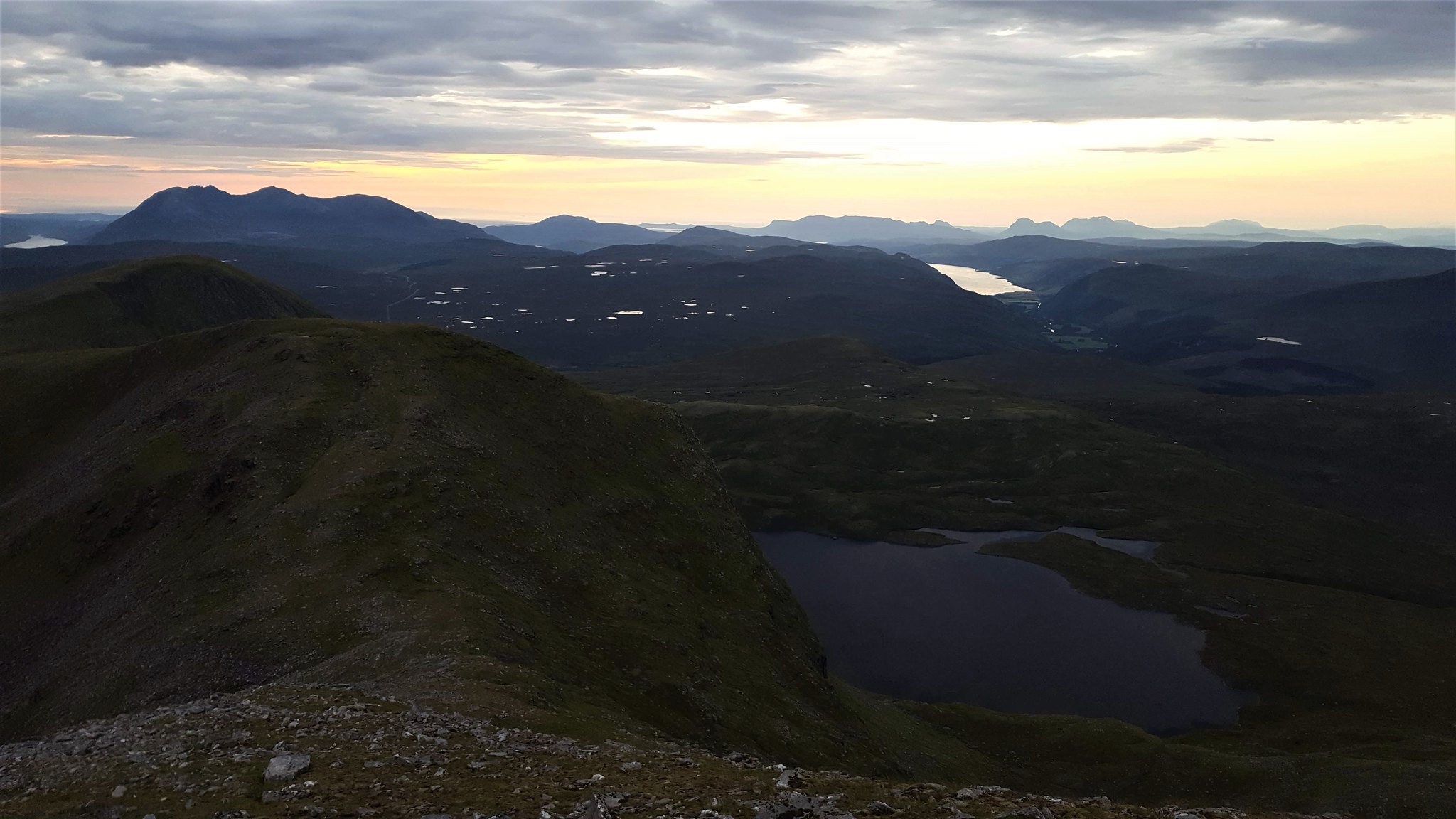 It was extremely tempting to stop for the day and pitch the tent on the summit of Sgurr Mor, but it was a bit breezy and I thought we best make it to the next top. Semi-sprinting down the steep descent, I was scared that once at the Bealach, I would miss the sunset....panic stations! Luckily I made it to my planned top, Carn na Criche, with about 15 minutes to spare before sunset. What unfolded was quite spectacular, and a very special memory. As always, pictures never do it justice, especially with a phone camera. 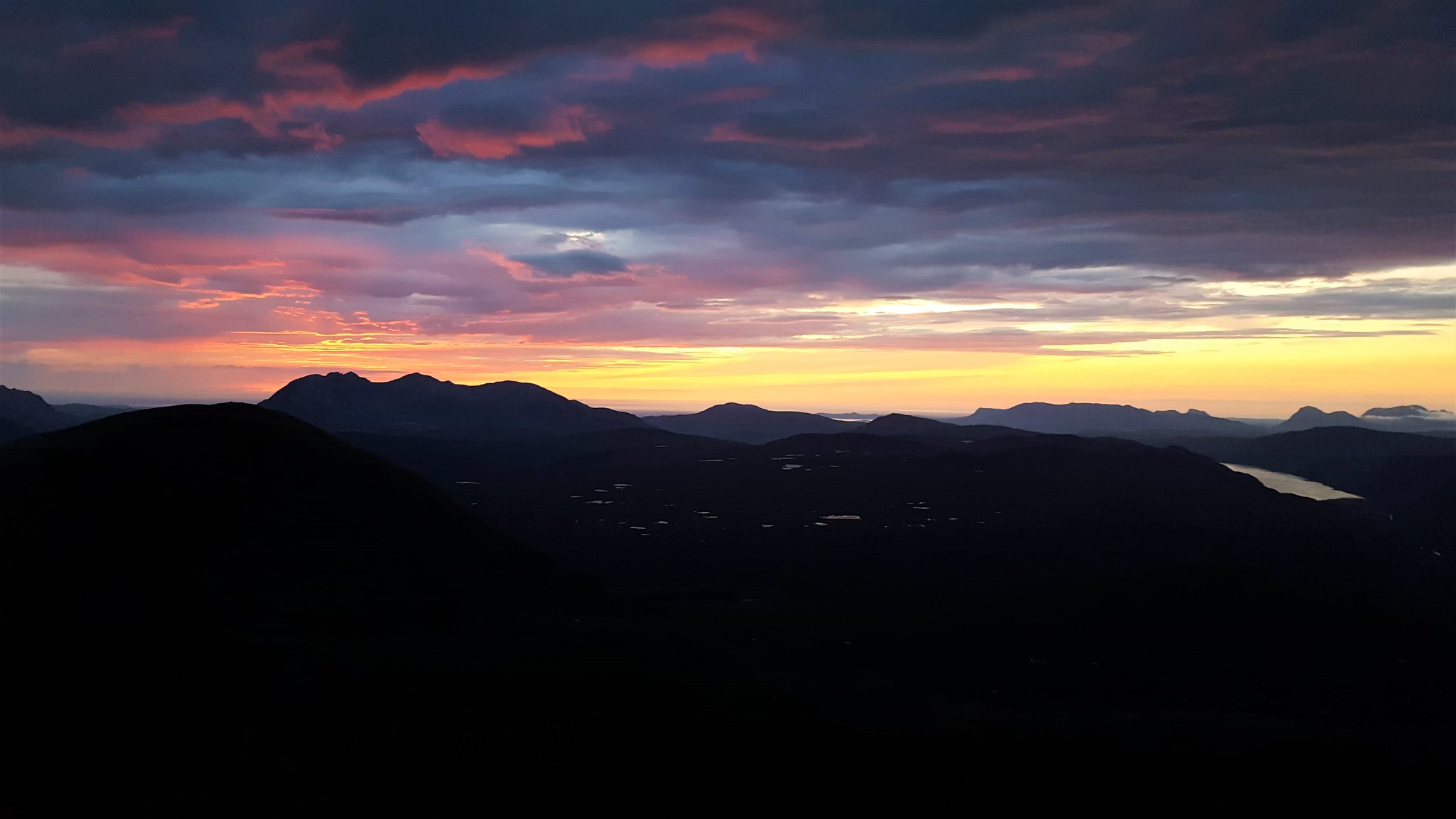 Sunset over An Teallach

I took a million photos, but as always, most look exactly the same! The Assynt hills were crystal clear and a wonderful sight, with Stac Pollaidh, Suilven, Canisp et al clearly visible. And the most satisfying part, we had seen about three people all day and nobody for hours. What a feeling it was watching the sunset together. With the show over, my stomach was badly needing fed, so Laura jumped onto stove and dinner duties while I pitched the tent in a nice wee hollow by a tiny lochan. 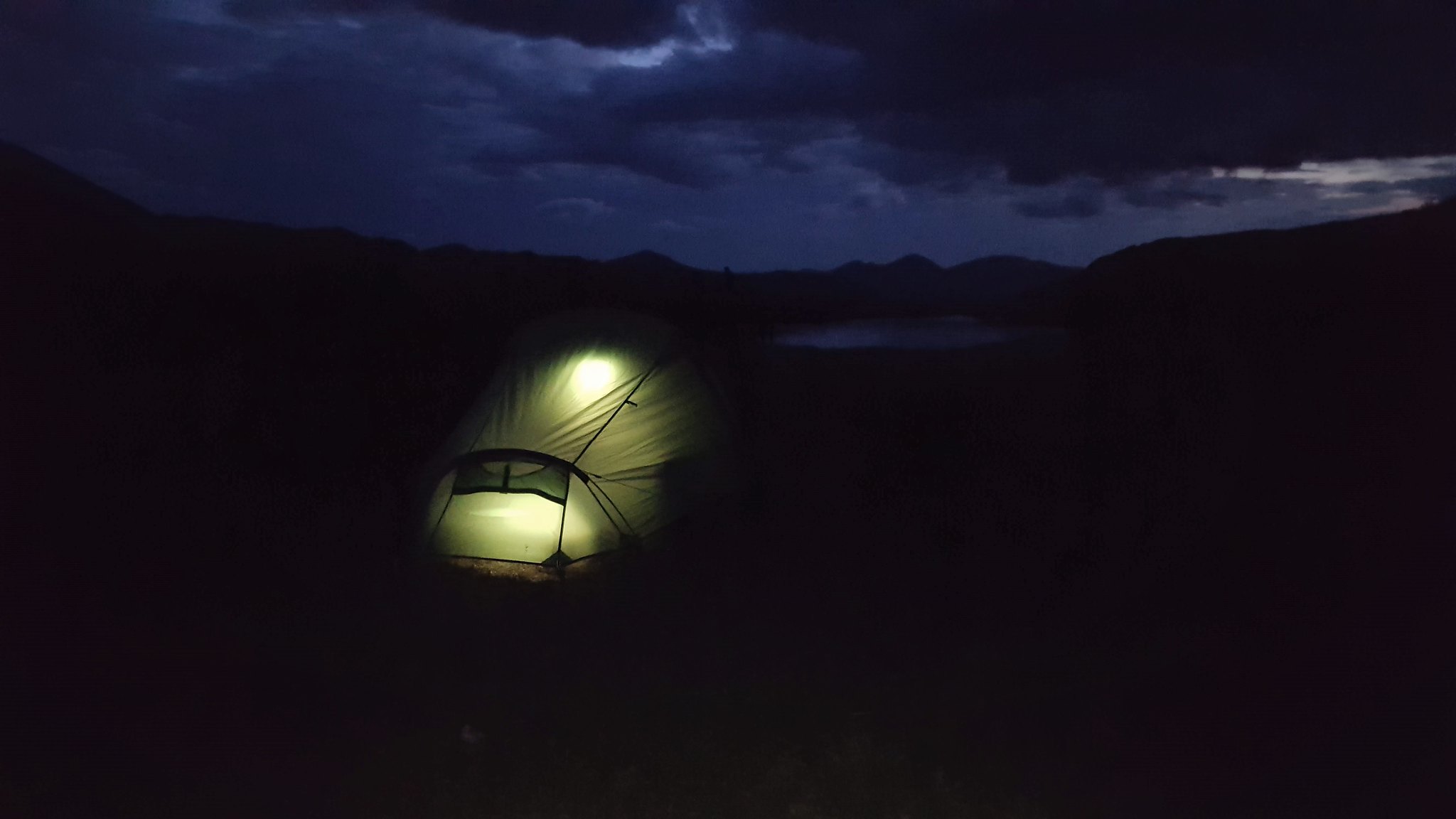 A great spot. Flat, out the wind and with views. Nice.

Almost as soon as dinner and coffee were inhaled, we turned in for the night. It was about 10.30pm by this point and we were hopeful for a sunrise show in the morning. The alarm sounded at 5am, ready for sunrise at 5.20am. Peeping out the tent door, we were initially disappointed as there was a lot of cloud around. On closer inspection however, it turned out that we were pretty much above it, with Sgurr Mor towering above us completely out of the cloud. With renewed excitement, we quickly got our gear back on and took up a vantage spot near the tent for sunrise... 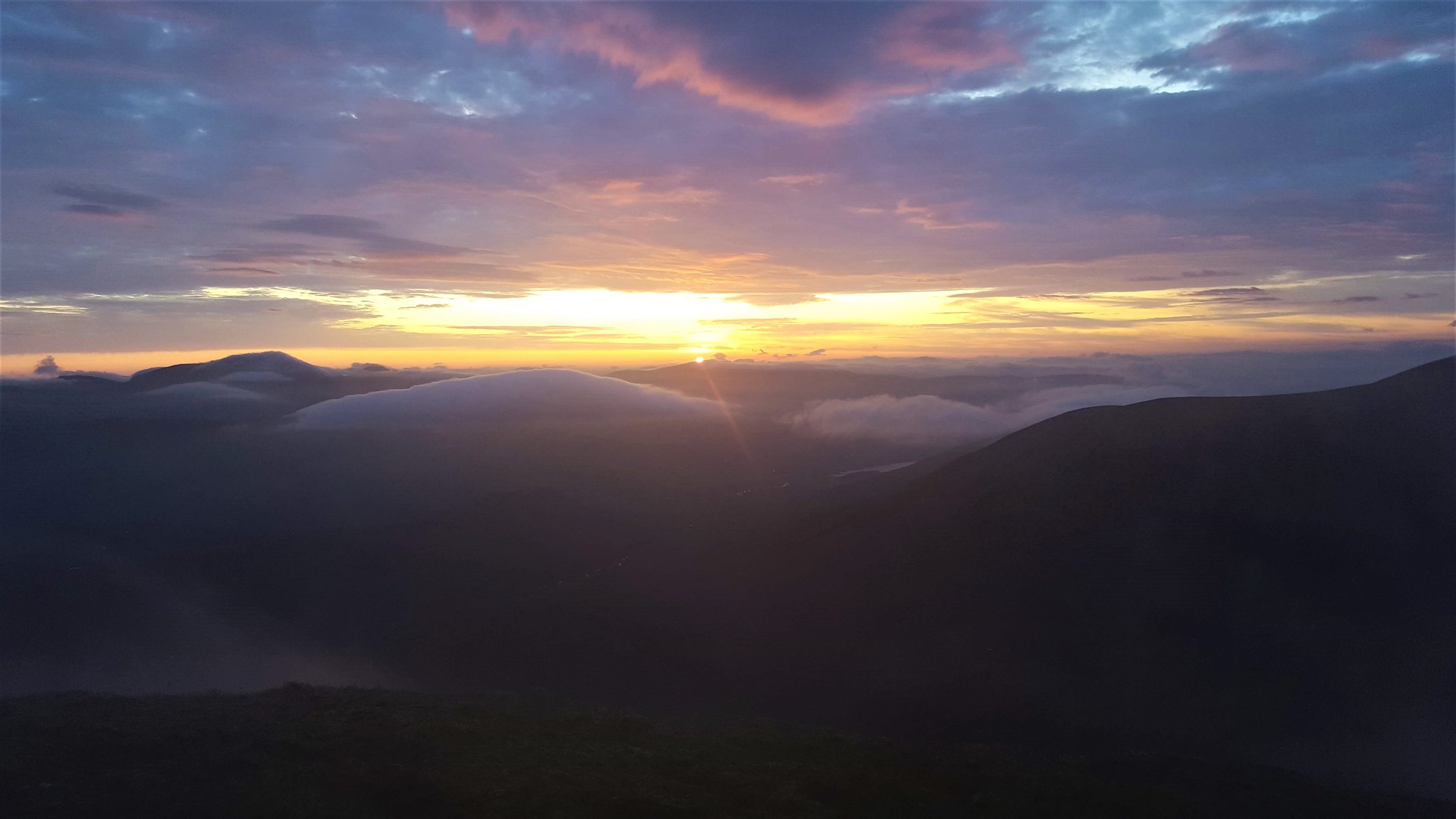 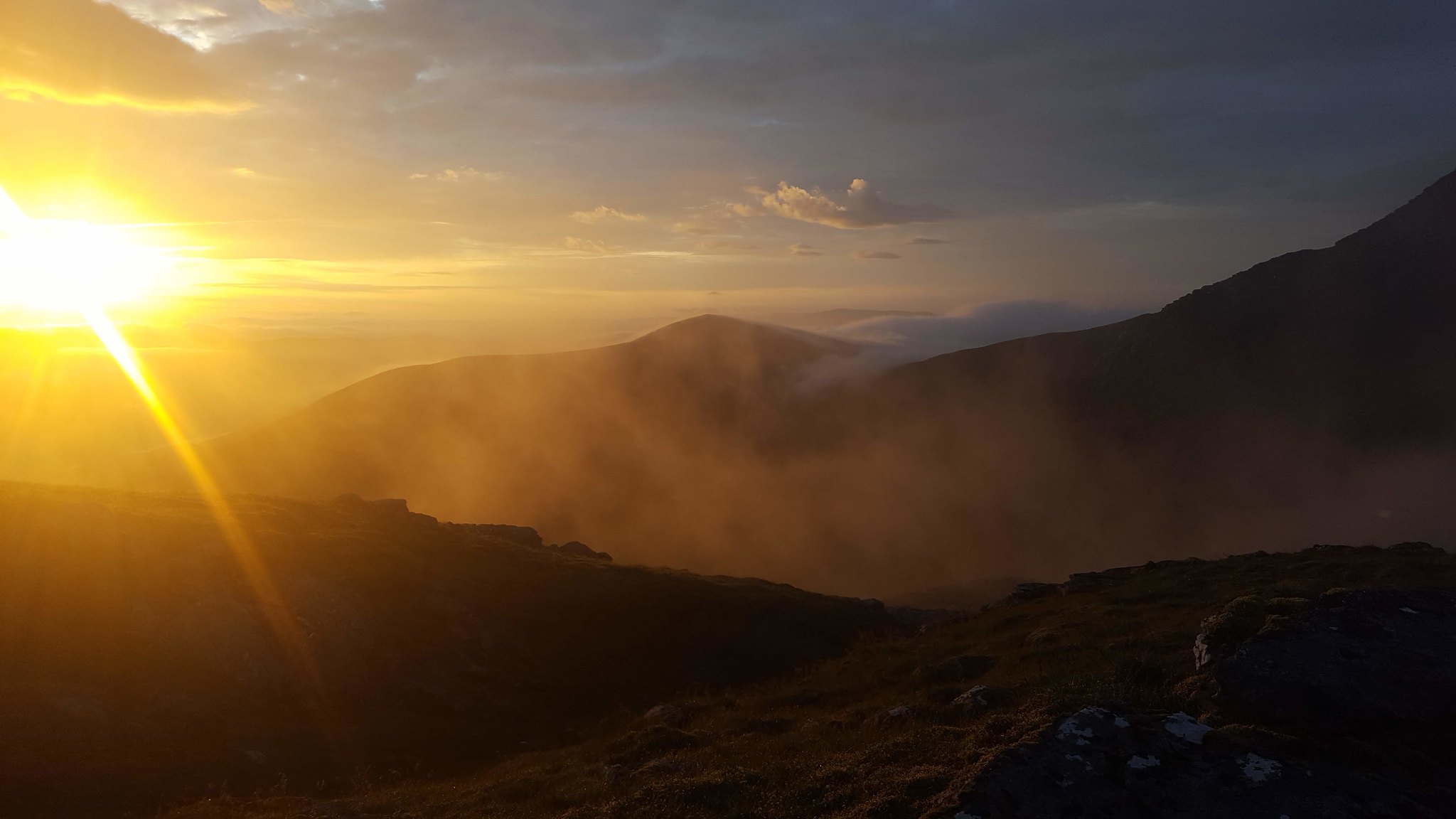 From next to the tent.

After enjoying the sunrise, we packed the gear back into our bags and continued west to our 5th summit, Meall a'Chrasgaidh. Another out and back meant we could leave our bags behind again before ascending to another superb summit viewpoint at 7.15am. We were surprised to meet another guy already at the summit, who had started walking at 4.30am and this marked his 200th Munro. Top job!

Next for us was Sgurr nan Clach Geala, a stunning ridge walk in and out of the clouds, which were flowing up the valley and spilling over the ridge line. 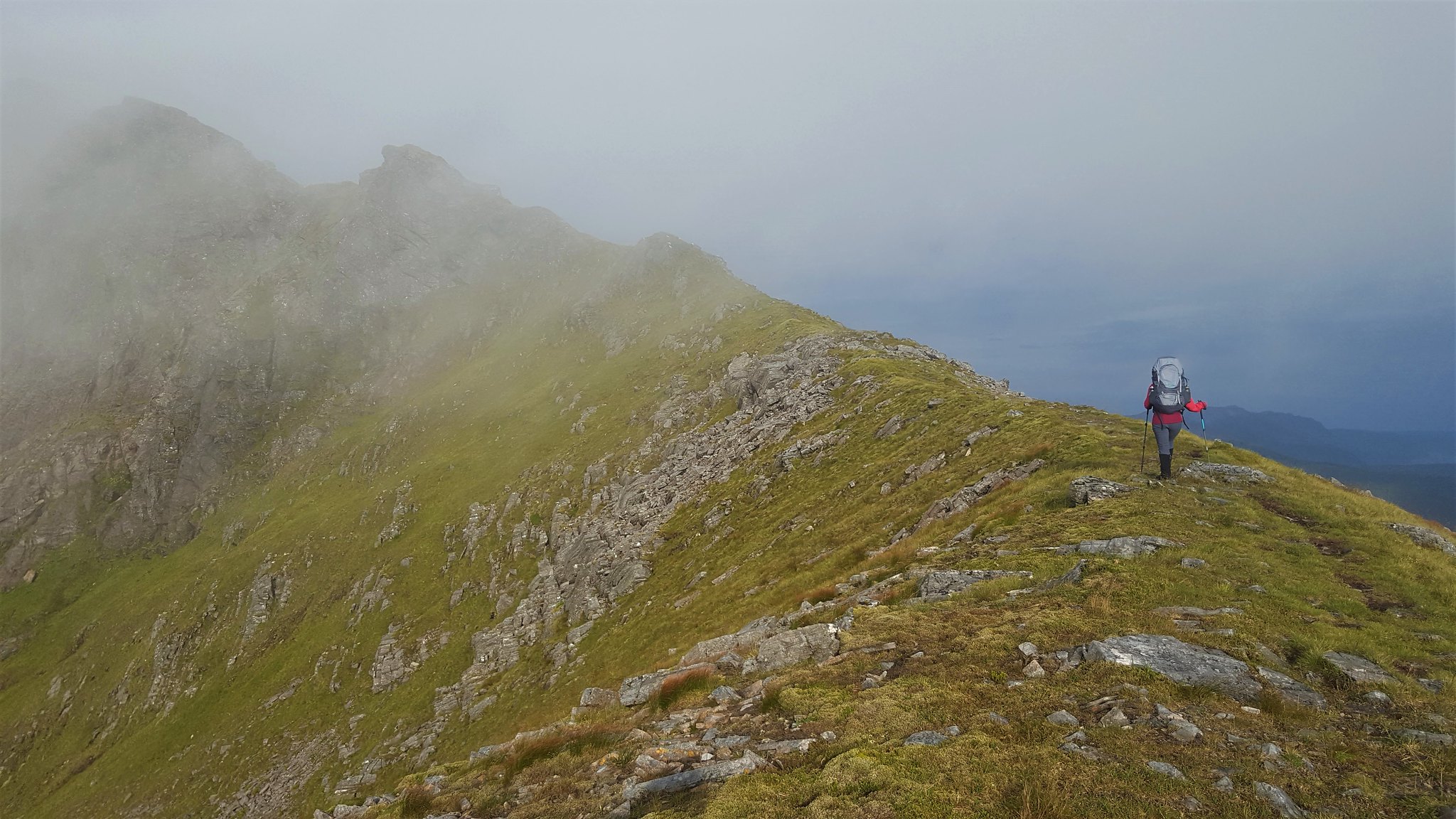 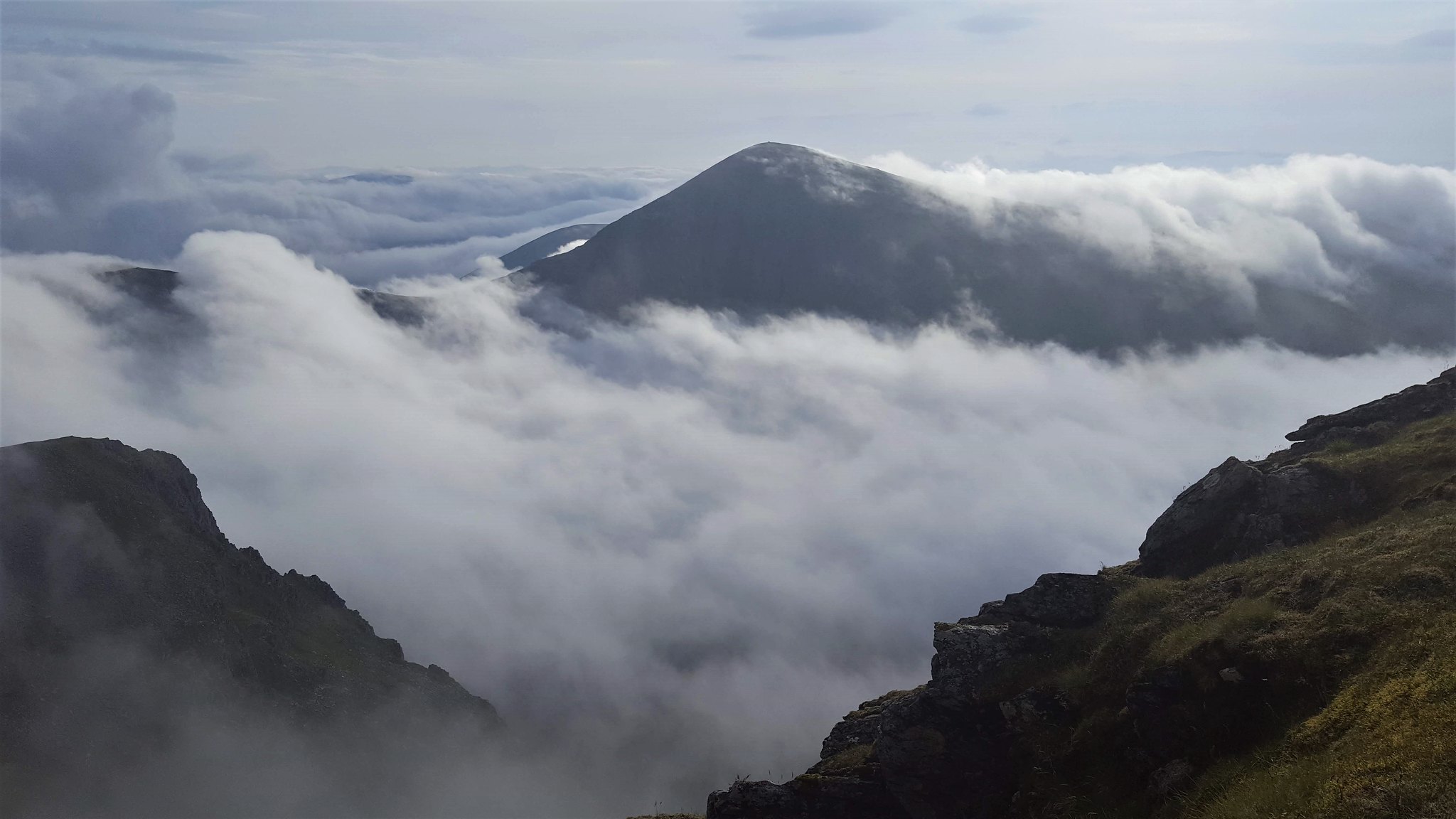 Back to Sgurr Mor above the clouds 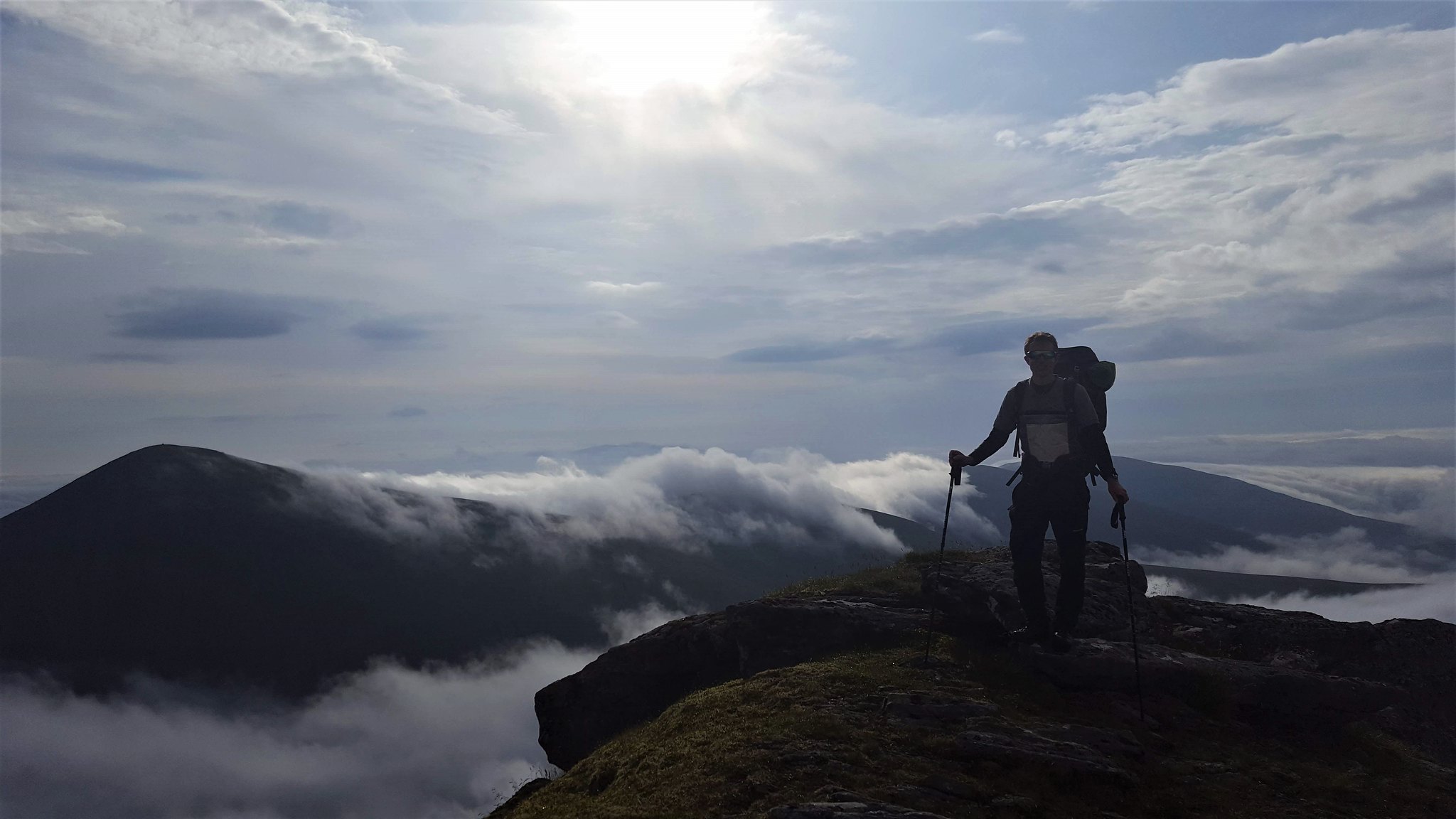 The morning views from the summit of Sgurr nan Clach Geala were quite something, with the peaks of the hills we climbed yesterday sticking out above the clouds. Starting the descent towards Munro 7 (Sgurr nan Each), the views continued to deliver.

Looking back towards the summit of Sgurr nan Clach Geala and Sgurr Mor to the right. 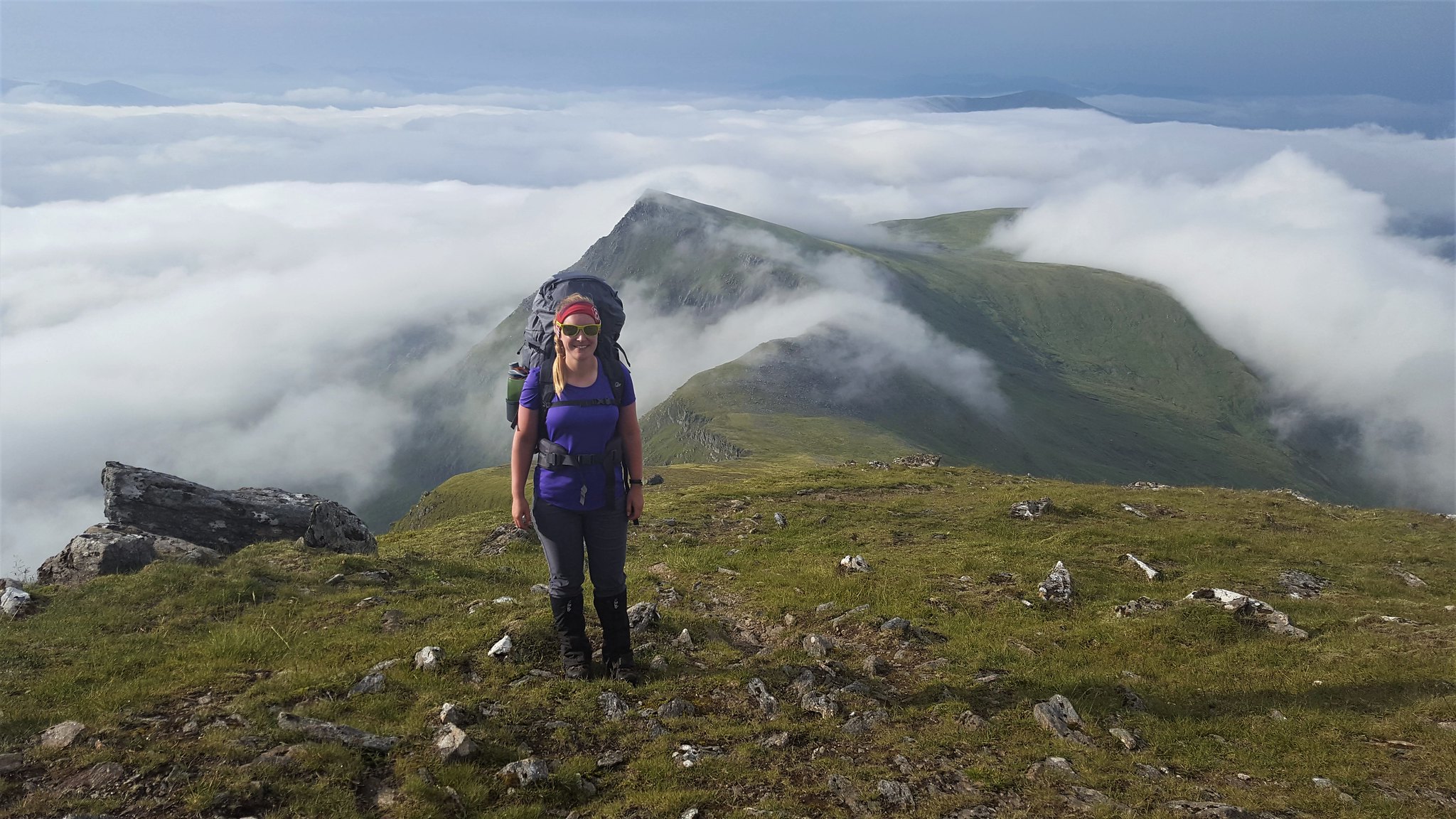 Onwards towards Sgurr nan Each.

Sgurr nan Each was thankfully another out and back, which meant bag freedom once more! A quick up and down to the summit along the cloudy ridge did not take long at all, before descending to be reunited with our bags again....sake! I now broke the news to Laura that the biggest descent and re-ascent was to come before Munro 8, Sgurr Breac. 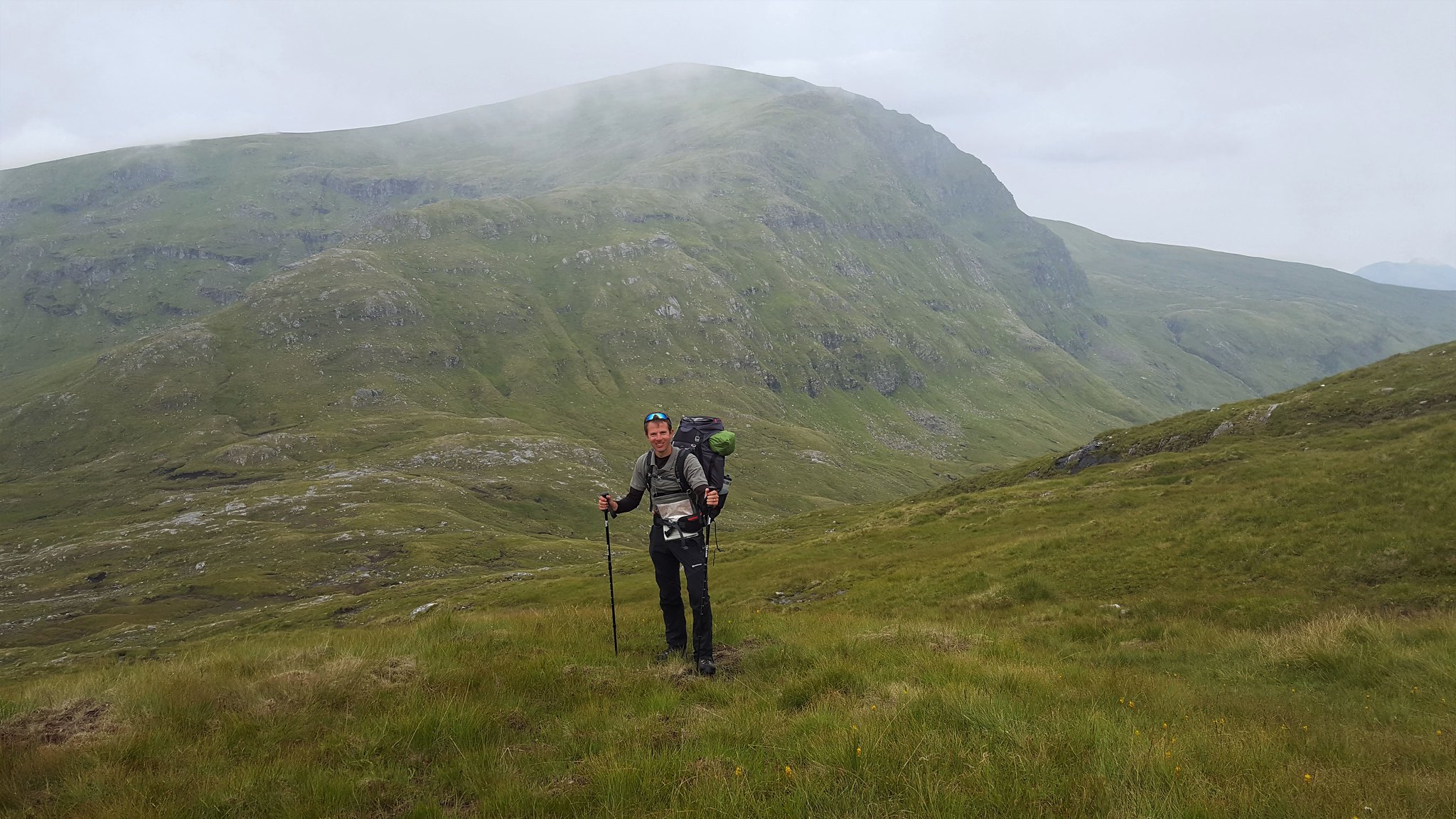 Halfway down and thinking "I really can't be arsed going all the way up there..."

Amazingly, it took exactly an hour from the valley floor to the summit of Sgurr Breac, not half as bad as it looked from above. Unfortunately, the cloud had filled in after the morning breaks, and that was that for the remainder of the day until lower down. It was a bit more of a hike than I was expecting between Sgurr Breac and A' Chailleach (our 9th and final Munro), but I'm sure this was down to tiring legs and whilst in thick cloud.

We reached the summit of A' Chailleach at 1.15pm, with a rather large sigh of relief and sense of achievement. Although the cloud was still thick with a cooling wet mist, we were thoroughly chuffed with our exploits! 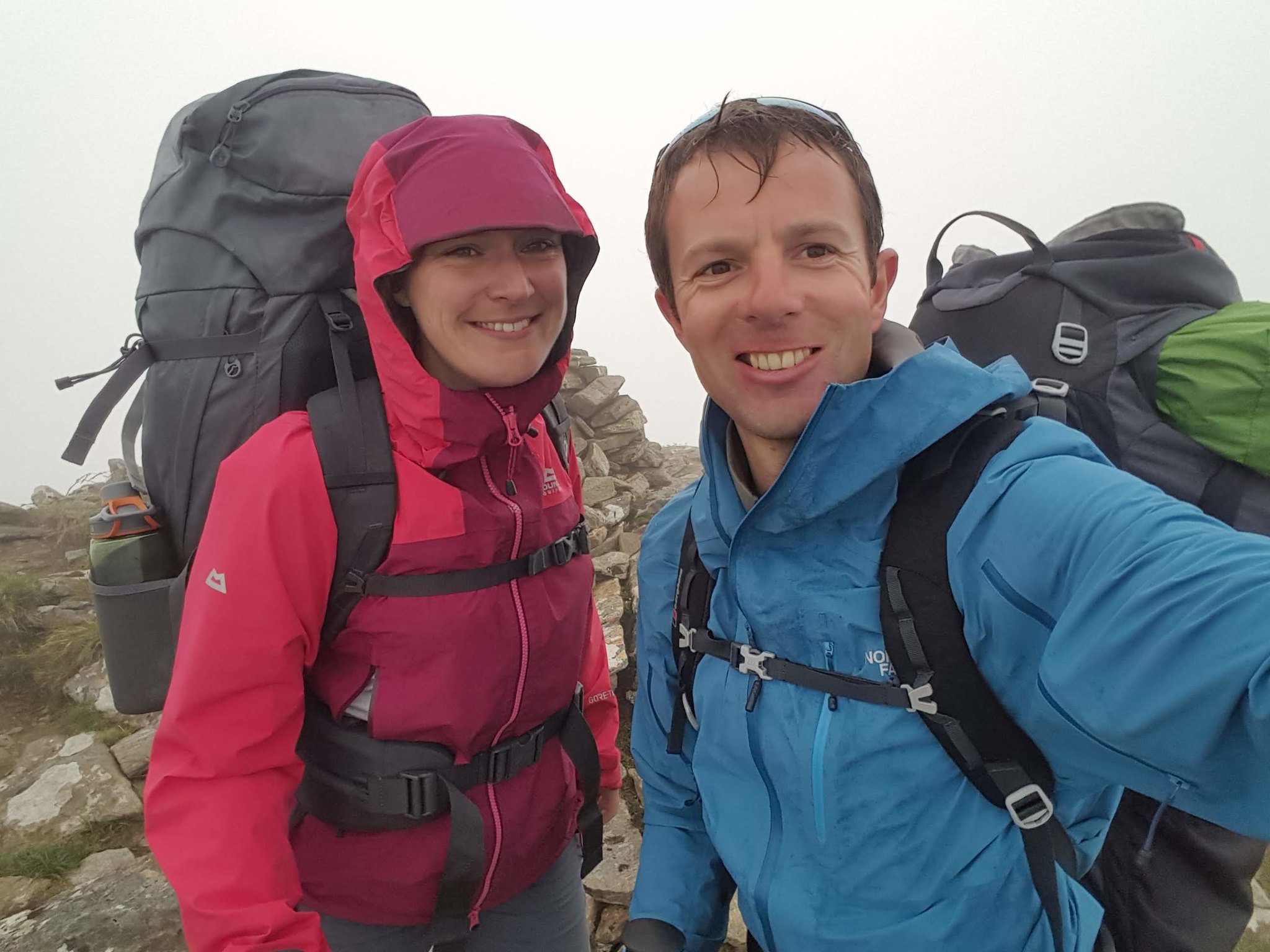 After that it was a steep descent into the Corrie before squelching our way past the lochan and down to Loch a'Bhraoin. It seemed the longest slog in the world through bog with tired legs, but again, my Scarpa boots ensured my feet remained dry throughout. Finally after what seemed like forever since our final summit, we reached the road at 3.55pm.

Now all that remained was to hitch hike back to our car... so after a few blanks, I hear a heavily modified BMW coupe piling towards us. Thinking to myself, this will be pointless, I stuck out a thumb and to my amazement, the guy stopped to offer a lift! Top man. So in we piled, basically lying under our gear in a BMW 6 series coupe, we were driven back to our car. I couldn't have appreciated the lift more, since we were knackered and that the driver was going to Ullapool, but went out of his way to take us to our car. Forcing the guy to take a tenner for his troubles, we bid each other farewell and brought an amazing adventure to an end.

Without a doubt, this was one of my favourite hill days ever! Combining the views, number of summits, sunset/sunrise, camp spot...it will always live long in the memory. A long and tiring walk, make no mistake about it, but I'm just glad I never ruined it by trying to rush it into one day!

fannaichs.gpx Open full screen  NB: Walkhighlands is not responsible for the accuracy of gpx files in users posts