Watching the mists roll in

Watching the mists roll in 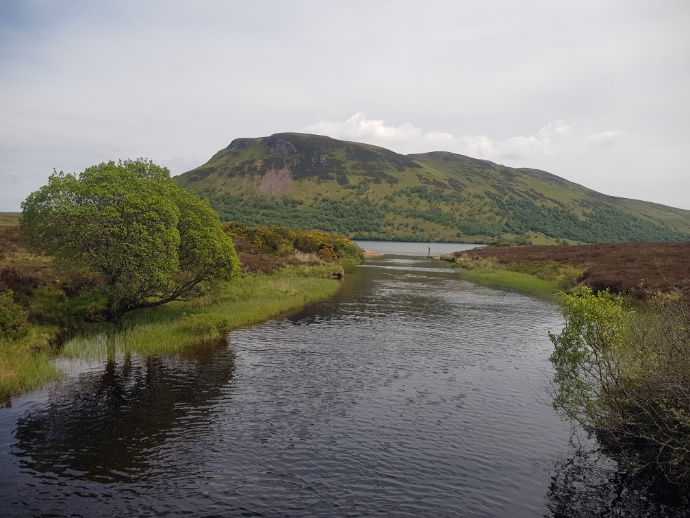 Stumanadh's west arm from the bridge

It turned out to be my kind of hill: steep, no-nonsense sides with an interesting series of tops curving around to the big one. That ridge hides the "real" hill from the road.
I started from the road at 13:02. The weather was sunny and calm, visibility good and the bluebells were out under the birch. Looking back at the bridge 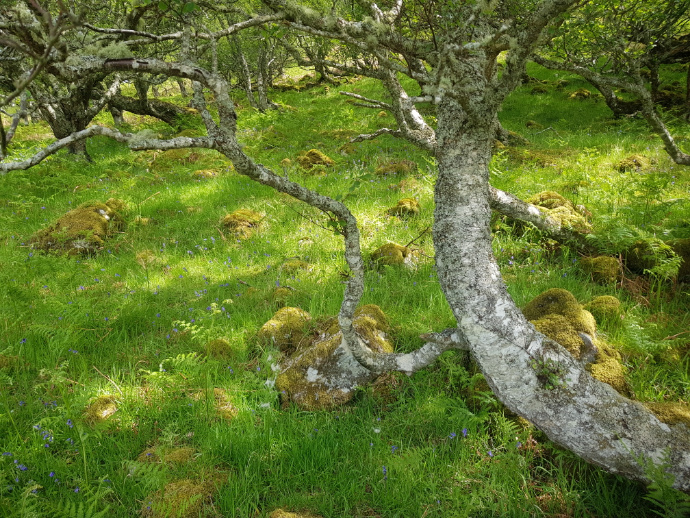 I couldn't blame the midges for hanging around here 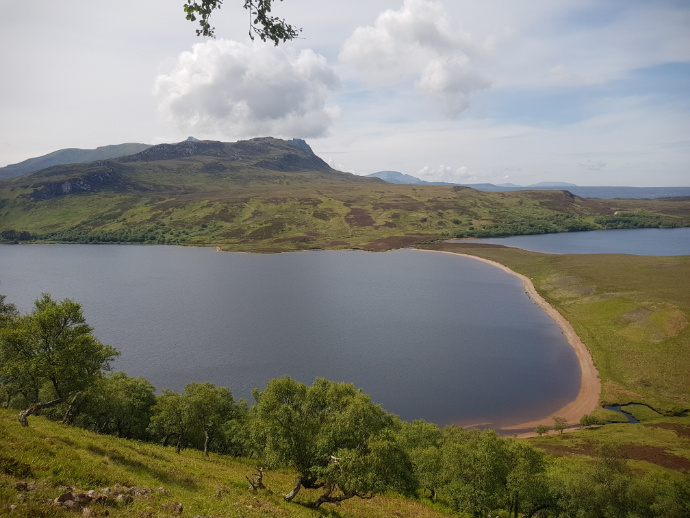 Back across the land bridge The first and steepest slope starts to level off near the top of Sròn Ruadh. Pausing for breath between two crags, I turned around to see a bird right at my eye level, making use of the updraft over the crag. The silhouette looked eagle-like to me, so maybe a buzzard with ambition, but by the time I remembered the camera in my pocket it was heading out of range. Making itself scarce so I don't notice it's actually a crow 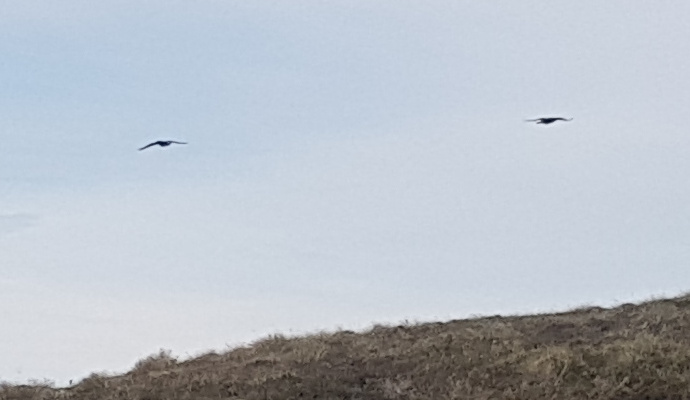 "Look out mate, there's a camera behind me - turn around!"

The way up was a over a series of nicely rounded lumps. The sea through a gap

Stopping on a higher slope I looked back and saw what I thought was a group of walkers maybe 20 minutes behind. They'd vanished a few minutes later and I saw no more of them, leading me to wonder if they were ever there at all. Probably they were taking a quicker route down.

After that it was up, down, round the end of a burn and up to the trig point. 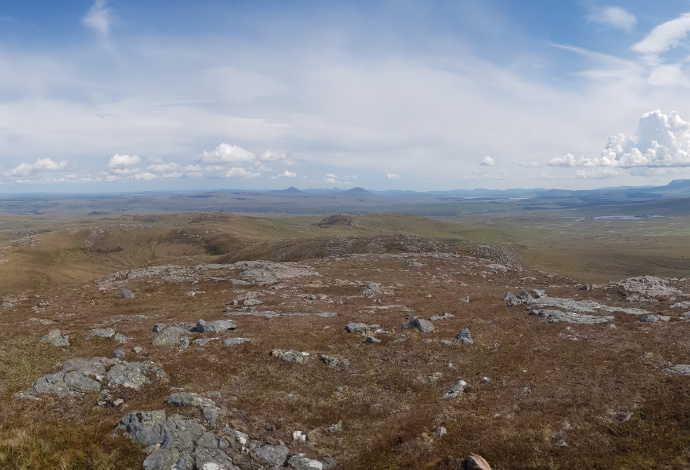 SE - Griams and a bit of Ben Armine 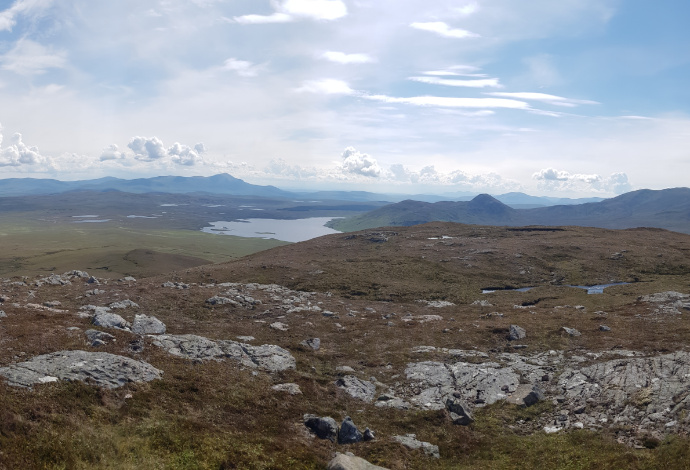 SW - Ben Klibreck, Cnoc nan Cùilean and a bit of Loyal, Hee in the background Down the other side was a nice collection of toplets with a few frogs in between. Standing near the end of Creag Bhreac I saw that Torrisdale Bay, which until now had made a nice yellow triangle beyond the woods, was covered in a dense white haar. The wind was blowing it straight towards me. Nice of it to wait until I'd done the last top. Sure enough, some minutes later the clouds rolled in to cover the peak of Beinn Stumanadh. 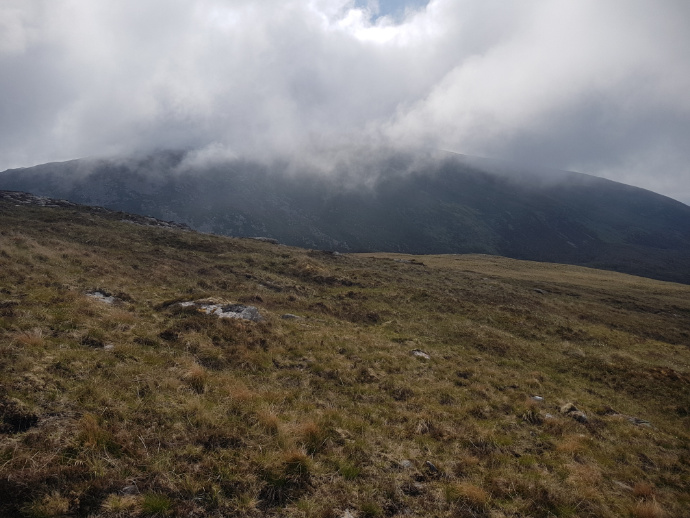 I chose a straight line down to avoid the new clouds, then met the first of several deer fences. My 'phone battery had been draining extra fast since somewhere after the summit, and around here I turned it off (and stopped logging my route) to preserve what was left.

The fence seemed to be heading west over Stumanadh's north spur, so rather than scale its wobbly stabs I followed it up into the fog and down into Coire na Caileig. After a while I could see some hilltops through the mist, and was contemplating crossing the bealach by Sròn Ruadh when I came across the track towards Achnanclach bothy.

I'd seen the track on a map but expected it to be as overgrown as the one I'd allegedly crossed earlier in the walk. Instead it proved a quick and easy way out of the clouds. I got back to the start at 17:35. 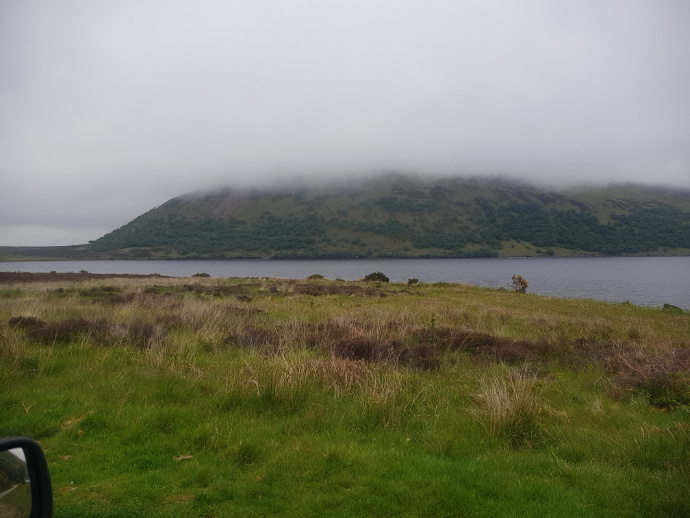 The track is approximate, especially on the steep bits.

stum6.gpx Open full screen  NB: Walkhighlands is not responsible for the accuracy of gpx files in users posts

Re: Watching the mists roll in

Re: Watching the mists roll in

Thanks, glad you liked it.