There is plenty of parking at Ardtalnaig, with refreshments at the start and finish! The weather was still a little damp, but it was not actually raining and seemed to be clearing.

While not part of plans, I was still still doing a reccy of the Shee of Ardtalnaig. I am aware of some peat hag along the way, but it is possible to easily gain some height via a good track. There are tracks heading up around the hill at both ends but I am not sure if they meet up for an alternative return to heading down along the side of the Alt a' Chilleine, like today.

After passing through heather, the track continues through long grass. The track is still helpful though; being much easier going than walking up a pathless hillside such as Beinn a'Choin, a couple of weeks earlier. I was very pleased with how quickly we were gaining height. The day's objective, Creagan na Beinne is left, with Shee of Ardtalnaig centre and Meall na Oighreag (Creag Uchdag) beyond. Thomas was going well, after being under the weather a couple of days earlier. I really enjoy walking with Thomas, but there is the added benefit of not having to set up a tripod, shutter delay or connecting my camera to my phone to act as a remote control. Thomas did a great job with this one!

There were flies buzzing around some sheep droppings at the summit and they were annoying Thomas, so once the photographs were taken, we headed off. This was my last hill before heading back to work in Kazakhstan and perhaps this prompted me to take one last look back.

A short distance away, down the south ridge, were these rocks. We found some comfortable bits to sit on and there were no flies, so we stopped for lunch. Here, we are looking towards Auchnafree Hill and Ben Chonzie. The cloud was finally clearing on the Ben Lawers group: L to R Beinn Ghlas, Ben Lawers, An Stuc and Meall Garbh.

The faint path down the south ridge soon fizzled out, but the descent to Dunan was reasonably quick and easy.

Although, I new that it was a locked bothy, I still wanted to check it out. Besides, although further, I felt that returning this way would be quicker than returning by the route of ascent. As it was, the bothy was open. I didn't notice at the time, but the pin on the padlock is actually bent, so I guess someone had forced an entry. There was a temporary sign regarding deer management in the vacinity and Thomas did comment on a distant shot. Perhaps an estate worker had forgot the key? ​I was cheeky enough to quickly take a look inside. I would love to spend the night here, if I could get a group of friends together to make it economical. Anyone out there?

I didn't stay inside for too long as I didn't want someone turning up and accusing me of forcing the lock! We headed off along the track that forms part of the Amulree alternative of the Rob Roy Way. The Shee of Ardtalnaig appealed, but I knew that Thomas would not share my enthusiasm!

Thomas likes to have a game to take his mind off feeling tired or any other discomforts. He was complaining of back pain - at his age! After all the rain the previous day, I was unsure about the state of the burn. The track crosses the burn and then crosses back again, so I thought that we may need to keep on the west bank, but the levels had clearly dropped. While Thomas chose a narrow bit that he could leap across, I took great delight in just running through the water. Fell shoes are usually wet anyway and the water quickly drains. 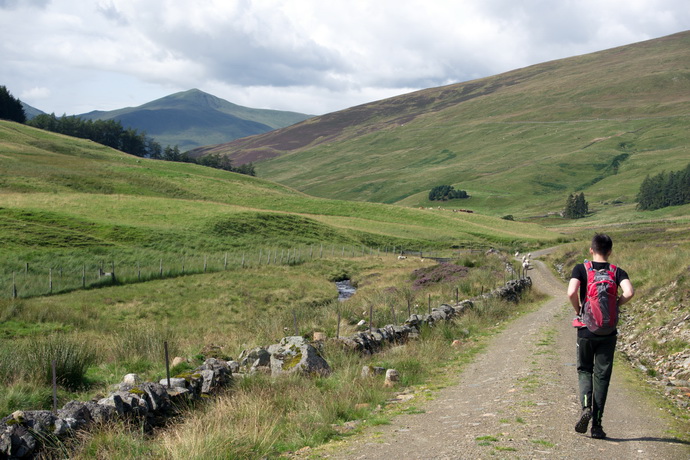 More of the Ben Lawers group gradually comes into view. Thomas has a thing about climbing gates. Simply opening them is too much effort! I try to encourage him to climb them near to the hinges to reduce the risk of the gate from dropping and then not closing securely. However, I think my explaining the Physics fell on deaf ears! Thomas was beginning to tire and all he could talk about was "Chinese or Fish & Chips?".

We passed and briefly spoke to two ladies as we approached the farm and the tarmac road beyond. I remember An Stuc requiring a little bit of care in descent but it looks fairly easy from here.

Near the bottom, we passed these fruit. The best suggestion seems to be Rosa rugosa. Thanks to Helen Wemyss for identifying it. We quickly changed our clothes before heading to The Courtyard in Kenmore for burgers, just about the only thing not included in "I went to the Takeaway"!

The lock on Dunan was like that in early June when I passed by on a DofE expedition and a friend was there about a month prior to that and the same thing. Cracking howff though isn't it!

Regarding Dunan, I have been in touch with the estate and their reply was "The bothy used to be a ruin but was renovated by the owner a few years ago and it is a private building used regularly by the owners, the keeper and the shepherd throughout the year. If the bothy gets used without prior arrangement the loo will back up as it needs someone with know-how to fill the cistern. Yuck." THIS IS CLEARLY NOT INTENDED TO BE AN OPEN BOTHY SO DO NOT TURN UP EXPECTING TO BE ABLE TO USE THE FACILITIES!