I'm rather belatedly getting round to writing up a couple of Walk Reports from earlier this year. This was Day 2 of a Bearsden Choirboys' outing to Knoydart. Malcolm and myself still had all three Knoydart Munros to do, and back in January we'd hatched a plan to book into the Knoydart Foundation Bunkhouse for three nights the last weekend in May, so that we could hopefully tackle Luinne Bheinn and Meall Buidhe on the Saturday then Ladhar Bheinn on the Sunday.
Needless to say, the ever-reliable Scottish weather had other ideas

- it pretty much rained all Saturday and Sunday! We did get Luinne Bheinn and Meall Buidhe done on the Saturday, even enjoying a bit of a cloud inversion on the first Munro, but the rain got itself settled in nicely in the afternoon and we eventually got back to the bunkhouse completely drookit after a long and fairly knackering hill day. Even langoustines and Trappist beer at the Old Forge Pub didn't quite fully revive us

! When the Sunday dawned even more miserable, with a steady downpour and a fine Highland gale into the bargain, we quickly decided that attempting Ladhar Bheinn would be completely daft. However, we needed something to fill a few hours before we could decently turn up again at the Old Forge to sample the rest of their fine range of Belgian beers, so we thought we'd have a look at Sgurr Coire Choinnichean, the nice pointy Corbett that rears its rather shapely head immediately behind Inverie Village as seen on the ferry ride from Mallaig.
After perusing the excellent Harvey Maps map of the Knoydart area (which is thankfully waterproof!), we headed a short distance west up the road from the bunkhouse and took the side track branching north into the woods on the north side of the Inverie River. (Note that this is the main track leading to the Mam Barrisdale via Gleann an Dubh-Lochain rather than the Gleann Guiserean track used in the website's route description, so the ascent goes up the eastern edge of the Slochd a' Mhogha to reach the foot of the Corbett's west ridge, rather than crossing over the Slochd at its northern extremity.) Before long, the track crosses the Allt Slochd a' Mhogha, a northern tributary of the Inverie River that flows down through an impressive gorge to the west side of our target Corbett. I suspect the Allt is usually a fairly benign wee burn, but it was a bit of a raging torrent today 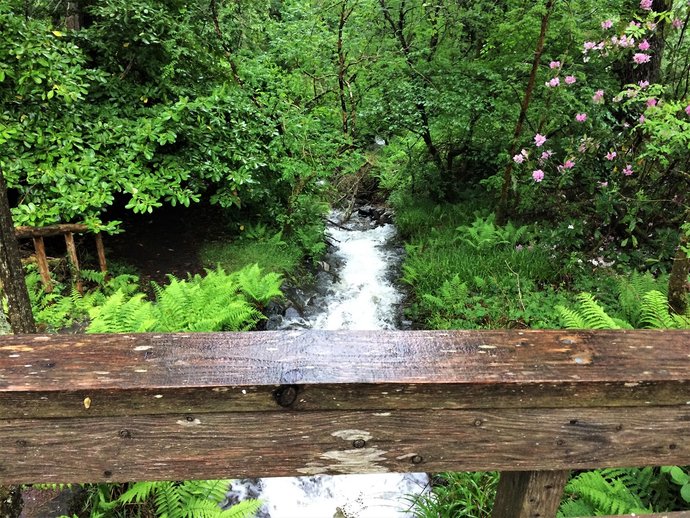 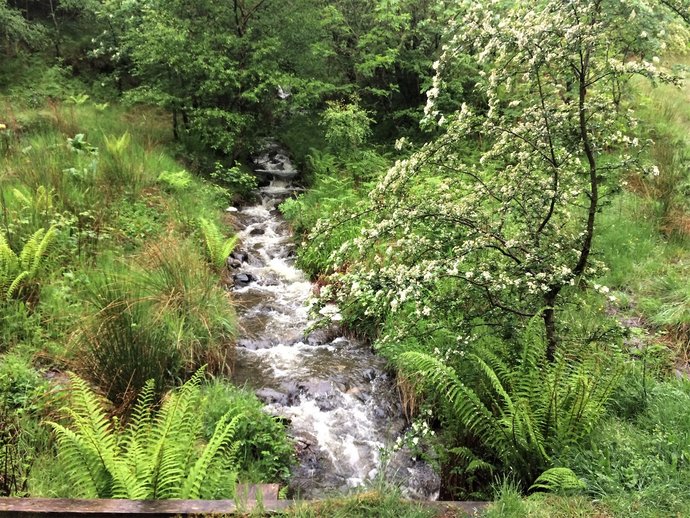 The route to the Corbett left the track just east of the bridge over the Allt, with a rather intermittent and extremely muddy path to get us started off, although needless to say this fizzled out pretty quickly amidst the waist-high bracken As we got higher, the wind and rain picked up steadily. We did however get a nice hazy view down over Inverie Bay, just before we disappeared into that low, thick blanket of Clag: 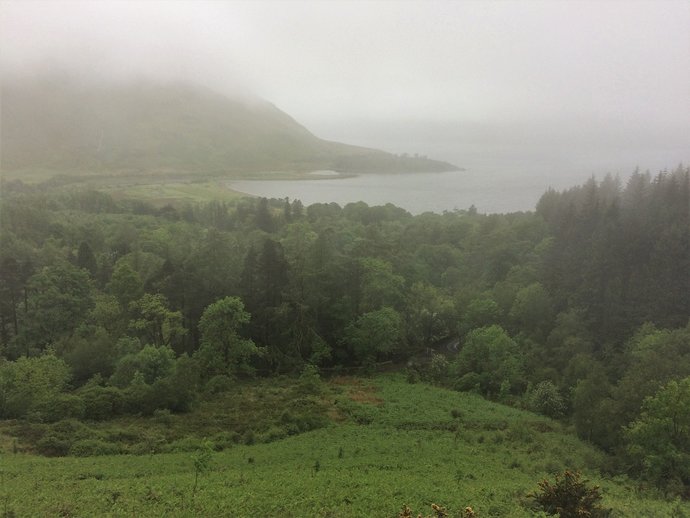 Maybe it's just the masochist in me, but there is something strangely enjoyable about tackling a hill in truly dreich weather, providing you have the appropriate wet-weather gear. Our landscape arguably looks at its most characteristically Scottish in a good steady downpour. Boulders; lush vegetation; burns in spate: there's something pleasingly elemental about it all. For about the first hour anyway, before you end up soaked through to your underpants

. Anyway, I found this hazy view strangely beautiful while I stopped to much on a pork pie and let Malcolm forge on ahead... 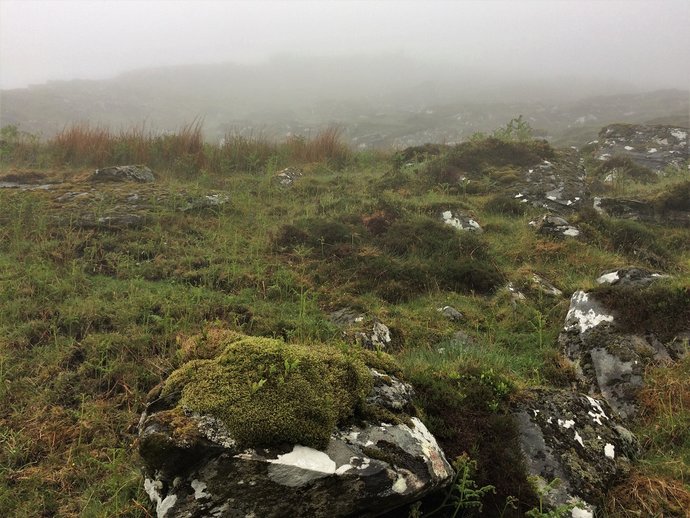 More boulder dreichness for your delight and delectation! 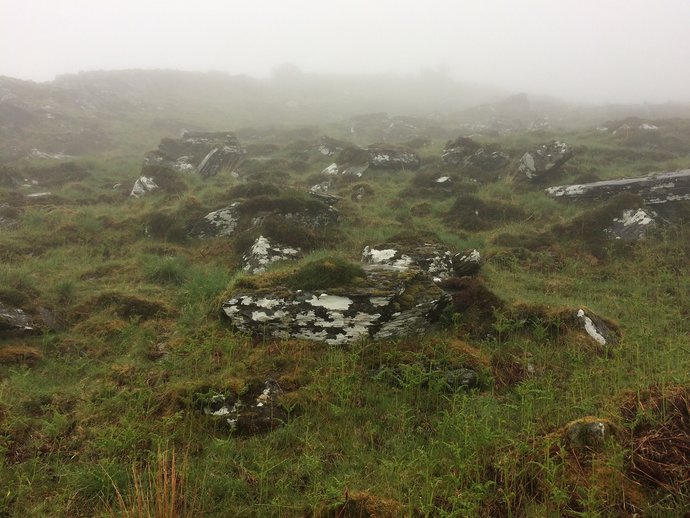 A bit higher up, the ridge started to get much more defined, and the wind became steadily more problematic (and by way of disambiguation, I'm referring to external weather conditions here, and not the effect of that pork pie on my innards). it was really blowing a hooly, and it became increasingly difficult to stay upright. Higher up, there was an entertaining short scramble, which was made even more entertaining by my Compo-style waterproof breeks trying to fall down at regular intervals

...
I was lagging well behind Malcolm now, and it was quite a relief to finally meet up with him near the top. He had reached what he assumed was the (uncairned) summit and decided that it wasn't a day to hang about, so he'd started to make his way back down. We found a fairly sheltered section where the path jooks behind some big boulders, and he offered to wait for me there while I made the short onward journey to the summit.
About five minutes further on, I came to the apparent top that Malcolm had reached … I very nearly did exactly what he had done and headed downhill again; but on closer inspection, was there not something higher over there in the distance through the sheets of driving rain?? I decided to head on for another five minutes or so. Very glad that I did too, because all of a sudden, this large and well-built cairn loomed unexpectedly out of the Clag This is without a doubt the worst weather that I've ever experienced at a hill summit (and there have been quite a few memorable past contenders, notably Beinn Heasgarnaich!). It was rather like being in a carwash, sans car, with high-pressure water jets coming at me from all sorts of unexpected angles

. I took a hasty Summit Selfie (which gives me that ever-popular Too Long In The Bath look), and then beat a hasty retreat lest some huge yellow roller sponge should descend from the clouds... I caught up with Malcolm before too long, and tried to break the news gently to him that he had turned back just five minutes short of the true summit … he did briefly contemplate going back for it, but it clearly wasn't the weather for it, and we set off downhill as fast as we could manage. Possibly a bit too fast, because I soon slipped on a particularly manky boulder and landed on my tail end: oh goody; coccydynia for the next fortnight

!
We thankfully found a better way down than the bouldery and pathless route we'd taken up onto the ridge. Traces of path took us down to the pleasingly precipitous edge of the river gorge known as the Slochd a' Mogha, where we enjoyed a hazy view of the swollen waters of the Allt far below: We inched our way gingerly southwards along the lip of the Slochd, with the path having completely disappeared at this point. Soon enough, however, we could see a safe descent route all the way back to Inverie, and even picked up an intermittent path again, that eventually took us all the way back to our starting point at the bridge over the Allt Slochd a' Mogha.
A couple of rainy views down over Inverie Bay: 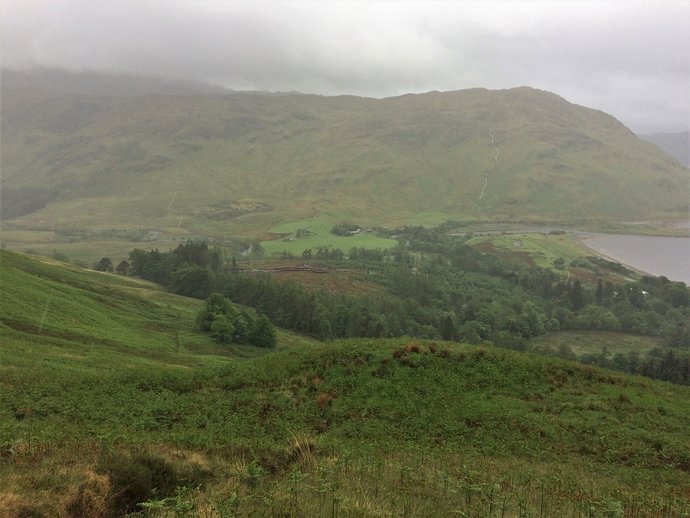 It was a huge relief to get back to the Foundation Bunkhouse and a good hot shower, before heading out late afternoon to the Old Forge Pub (we did wait until, oh, at least four o' clock or thereabouts

).
A long evening of revelry ensued, eventually sharing a bottle of whisky with some other walkers and a large party of fisherman back at the Bunkhouse. We were both a bit worse for wear on the Monday morning, but we did just about manage to make it down to the pier in time to catch our ferry back to Mallaig.
Needless to say, the weather had improved markedly and there was a grand view of Sgurr Coire Chonnichean from the pier. Ah, so that's what it looks like We probably got our best views of the weekend from the ferry back to Mallaig! This was a view back to Inverie - is that pointy peak away to the northeast maybe Sgurr na Ciche?? 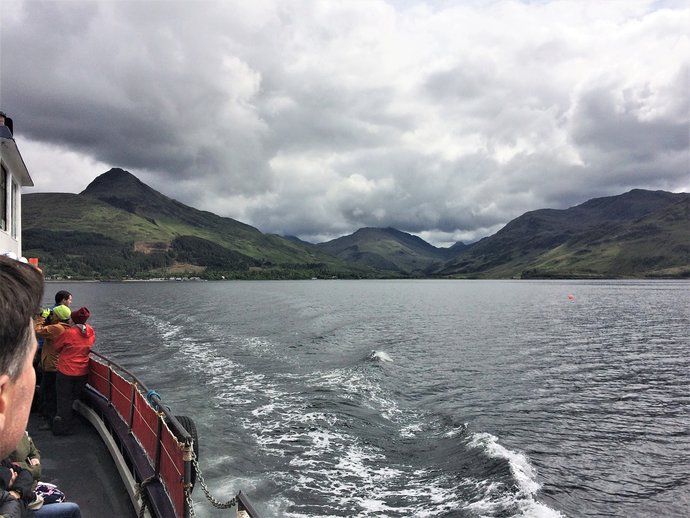 And a really lovely view of Rhum filling the mouth of Inverie Bay: Despite the dodgy weather, this was a grand outing. The magic of Knoydart is very much in the place as a whole and the real sense of community. It is a very special bit of Scotland, and on the whole we're glad to have an excuse to go back sometime to tackle Ladhar Bheinn and maybe another couple of Corbetts