My original plan had been to approach this hill from the Loch Tay side, assuming that the drive time would be shorter to Ardeonaig than to Glen Lednock. But google map informed me that driving via Comrie was a good 20 minutes or so faster, so I changed the plan of attack; this approach had the added benefit of avoiding the roadworks on the Port Glasgow road—not a problem in the morning, but could mean a significant delay if I ended up approaching the village during the afternoon school run!

I left home about 5:45, after waiting (awake) for quite some time for the skies to lighten. I began the long tarmac march up toward the Loch Lednock dam at 7:15. It soon dawned on me that I’d completely forgotten to check whether there might be any shooting scheduled, something I’m usually quite diligent about. The guilt about that oversight stayed with me for much of the walk, especially when I spied a Land Rover parked on the hillside upon my return to the burn ford. But I also met two other parties, presumably heading for the same hill, and none of them seemed to be concerned about it. (I checked when I got home—yeah, yeah—horse outta the barn, and all that—and the web site said “no info provided; follow local guidance.” Whew, then. I’d been prepared to fall on a sword of profuse apology if confronted.) 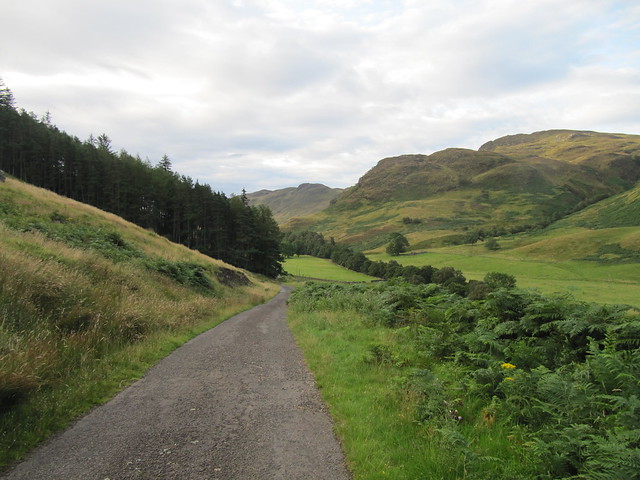 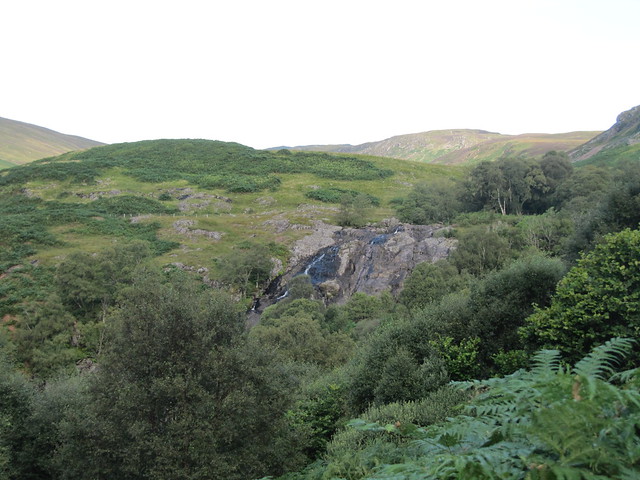 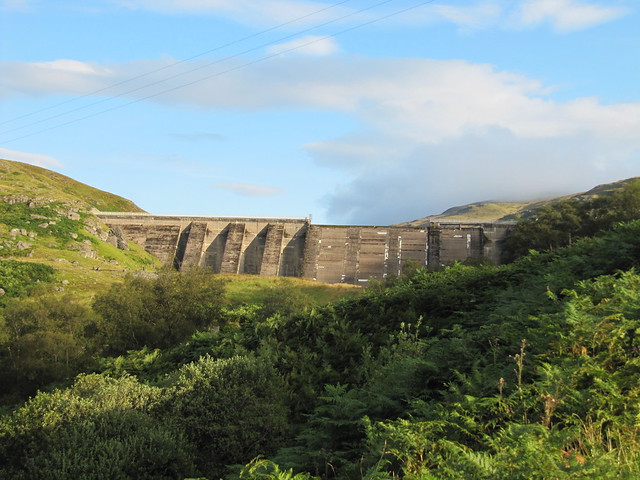 It was good to be walking on Scottish soil again, but I was once again reminded of how different it is to walking/hiking in RMNP. Case in point, the day Amy and I hiked to Lion Lake, we were out for about 9 hours, yet only gained around 700m of ascent; compared with today, wherein it was more or less the same amount of ascent during half the amount of time. There’s a definite tendency toward “straight up and down” on this side of the pond, at least in broad general terms. 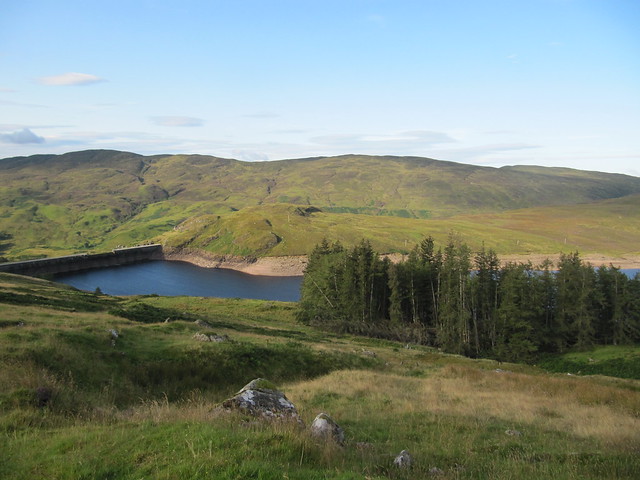 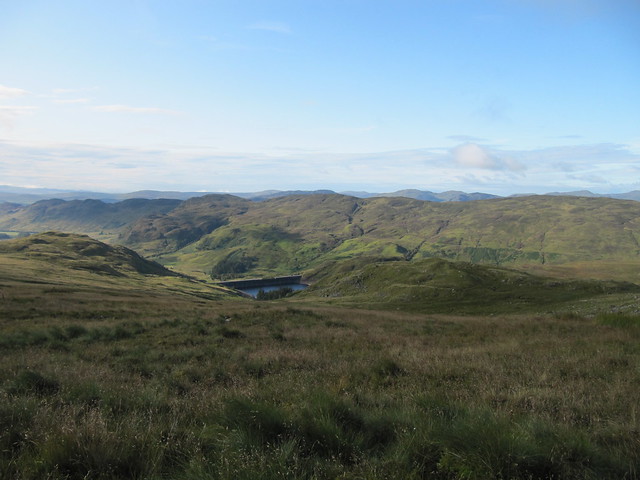 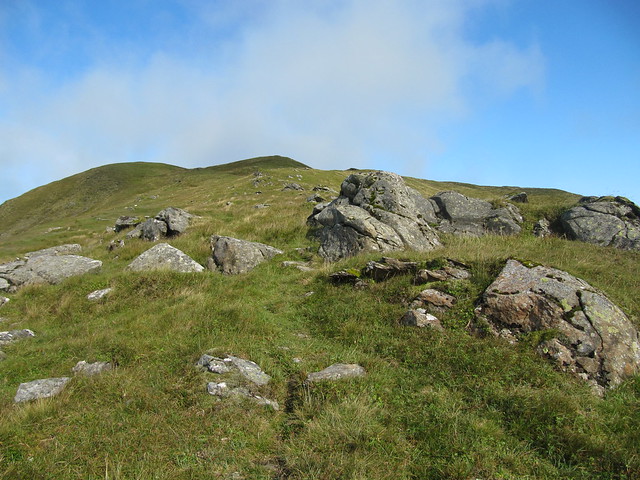 some rocks just below the summit

It was further to the summit than I’d imagined (isn’t it always?), and fair boggy, too. I was fully expecting to see the trig point when I topped out on Meall Dubh Mor, and was surprised to only then get a first glimpse of my actual target, still nearly a km away. But the last bit of ascent went fairly quickly, and I reached the actual summit at about 9:45. I sat for a few minutes, having a snack and waiting for the clouds over Ben Lawers to dissipate (they didn’t). 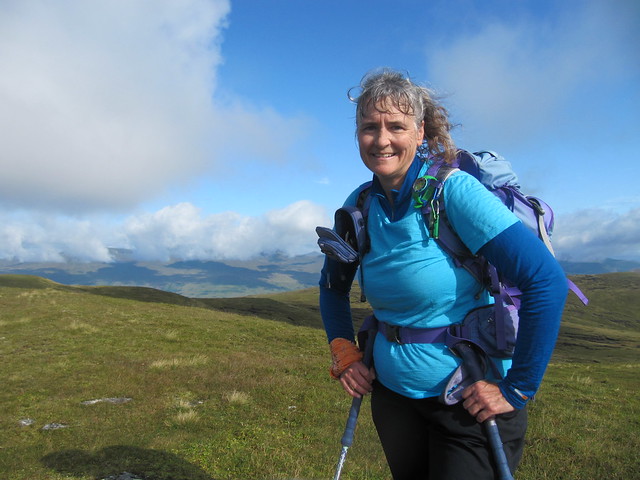 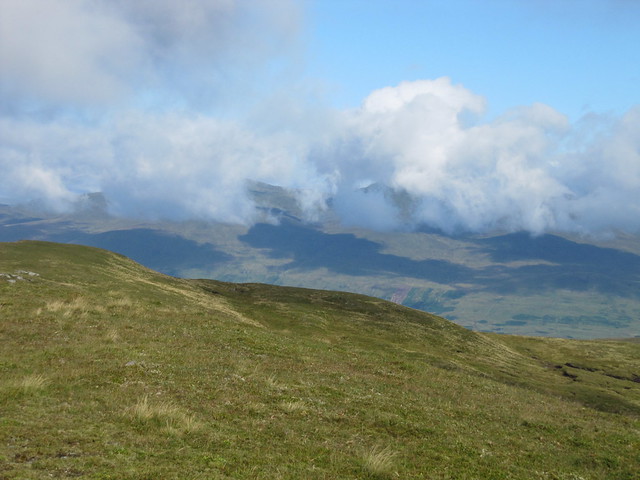 Ben Lawers and friends are under there somewhere... 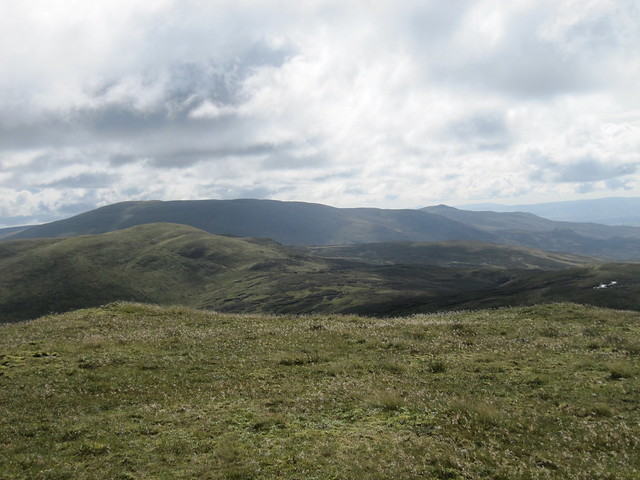 toward Ben Chonzie (I think it's the lump rather than the pointy one, but I'm not entirely sure)

I didn’t fancy the even “steeper and rougher return” along the reservoir, so I simply did my outward route in reverse. After all, the views are different going in the opposite direction, aren’t they? 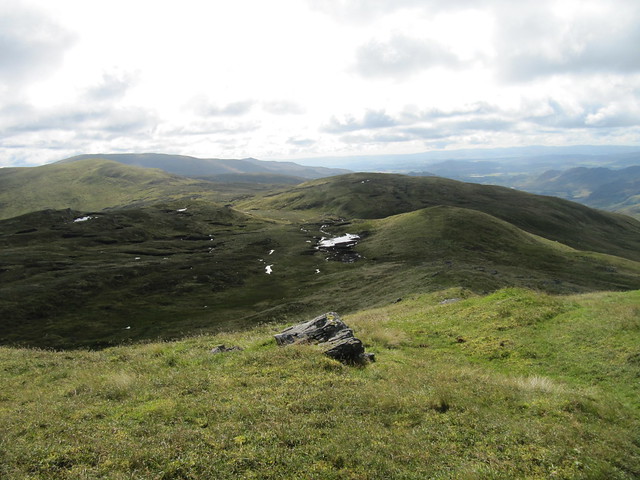 looking down onto Meall Dubh More, across a fiendishly boggy bit, and my exit route 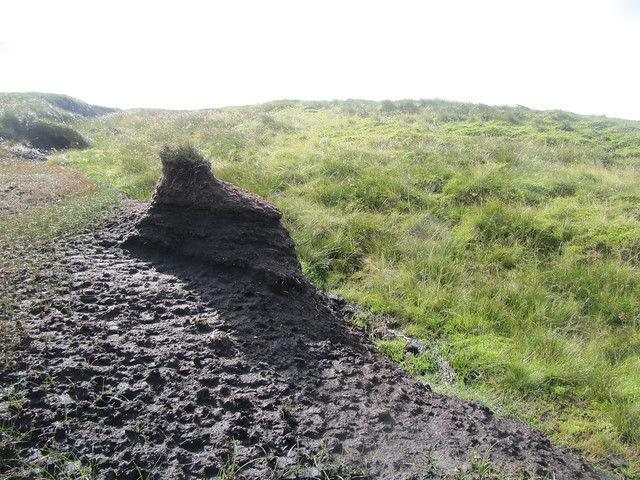 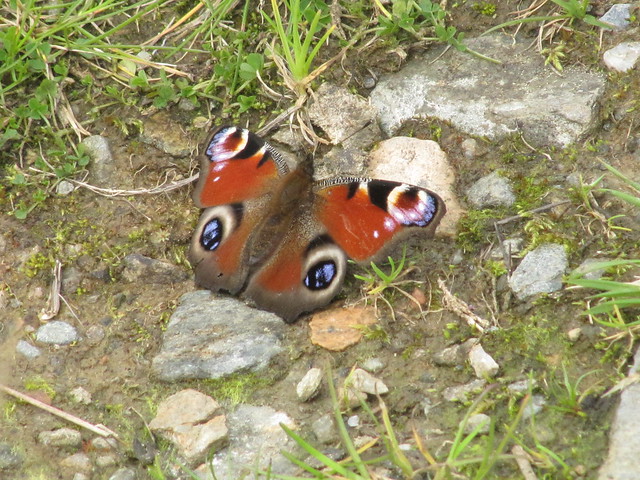 there were TONS of these on the way down