How to combine hills Panther's way

How to combine hills Panther's way


The hills of Braemore junction have always been a good idea for a short walk, since they are so close to home and not technically difficult. We had tried different routes, including the full ridge traverse of Meall Doire Faid on a cold January day. But we never combined the two, and now it was time to try this option. As a bonus, we included Meall Leacachain, a Simm at 621m

Our circuit begins from a large layby near Loch Droma Plantation. There's no obvious path, but the ground is relatively easy (a bit wet maybe). The route traverses Meall Leacachain and Meallan Mhurchaid then climbs to Beinn Enaiglair, where we spent some time waiting for the stubborn cloud to burn off. We returned over Meall Doire Faid and Meall nan Doireachan:

Track_BEINN ENAIGLAIR + G 13-6 KM.gpx Open full screen  NB: Walkhighlands is not responsible for the accuracy of gpx files in users posts
We crossed Allt Leacachain without any problems, if in spate it would be easier to cross higher up Coire Leacachain. It was a rather gloomy morning but forecast was for conditions to improve later in the day. The climb to Meall Leacachain didn't take us long. This hill is just a Simm and though we don't collect Simms, we decided to visit this top just because it is a natural prolongation of the Meallan Mhurchaid ridge and also, offers nice views east along Loch Glascarnoch.
Meall Leacachain and distant Beinn Dearg:

Loch Glascarnoch and the Wyvis brothers seen from Meall Leacachain:

Views west were at the moment obstructed by low cloud, but we had hopes for better vistas later on:

Looking south towards the (moody at the moment) Fannichs:

Kevin playing with his camera on the top of Meall Leacachain. The summit is marked with a cairn, but we didn't bother posing here, we had bigger fish to fry!

The next stage was to traverse to Meallan Mhurchaid over Bealach na h-Imrich, beginning with an easy descent down a rocky shoulder:

The bealach offer some peat-hag jumping, but most of the bog can be avoided. Soon, we were marching up the steep slope of Meallan Mhurchaid. A wide grassy gully offers a good line of ascent: 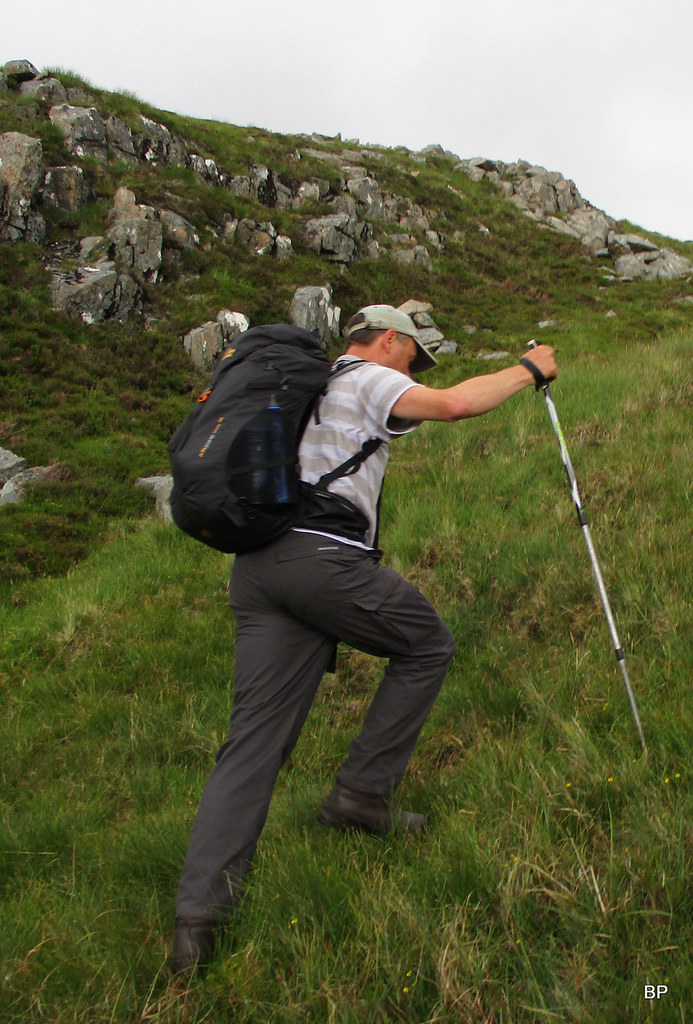 Once on Meallan Mhurchaid, we quickly located a good stalkers path which traverses this ridge almost all the way to Beinn Enaiglair. The ridge itself looked mouth-watering. We had explored it before, but it's a lovely walk with superb views to the nearby Beinn Dearg.
The ridge:

The top of Beinn Enaiglair was in cloud at the moment, so we took time traversing the ridge, thinking: the longer we take, the better chance we get for clear top. It worked in the end

View back east along the ridge, the morning still looking gloomy: The stalkers path actually contours around the back of Beinn Enaiglair, but we left it when we reached the highest point and aimed for the summit.
Time to go off piste, darling...

A very pleasant, not overly steep climb on mostly grassy ground brought us to the summit of the higher of today's hills. We had been here before but all I could remember was a swarm of very vicious midges, turning the summit picnic into summit torture chamber

Today, not a single midge or cleg spoiled our day

Enjoying the final climb to the summit: ...if only just for a few minutes. Just as we sat down for a cup of tea, the clag started to disperse. Kevin's mood improved immediately!
Panther, look! I was right after all! As he was hopping about, expressing his happiness, I busied myself with photographing Lucy on her 104th Corbett!

A few quick snaps from the summit. An Teallach:

Weather kept improving as we sat on the summit of the Corbett, so by the time we moved on to traverse to Meall Doire Faid, it turned to full-blown summer

An Teallach now nice and sunny... I only climbed it once and skipped a couple of tops, now I feel like we should re-visit this magnificent mountain to do the true justice to the pinnacles!

...but before I aim for Lord Berkely's seat, there is an easier, but just as entertaining hill to add to today's walk - Meall Doire Faid:

It might only be a Graham, but I have sentiment for this hill. So many times we drove past it on the way to Assynt, and I always thought, it must be a good mountain. Now we were marching up it for the third time

The western side of the Graham, facing Bealach nam Buthan, is steep-ish and could be tricky in descent when wet, but it is dotted with rocks of interesting shapes: ...as well as some rocky sections for those who want to make their life harder than it is

Kevin, of course, had to take it the hard way. At least his back was better today: 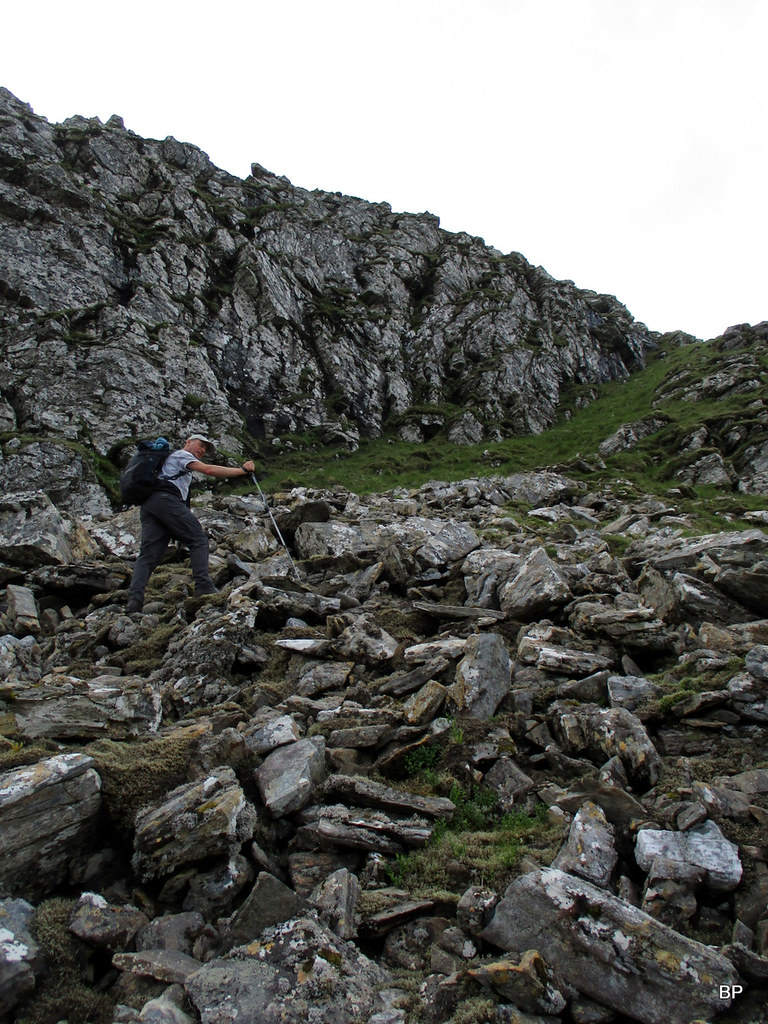 2019-07-16 beinn enaiglair 311 by Ewa Dalziel, on Flickr
By the time we emerged on the summit of the Graham, weather has turned 100% and we were now basking in sunshine. Meall Doire Faid is such a nice viewpoint, that we didn't mind staying here for longer. We still had a few cookies to munch on, while enjoying the surrounding landscape.
The Fannichs:

An Teallach and the Fisherfields:

A flying machine of some sort

View east along the ridge we were going to traverse later:

While we were sitting by the cairn, a large fly circled around us. It was quite unusual, with big eyes and a yellow head. It took me several attempts to get a good photo:

According to my (somehow limited) knowledge on British flies, it's a noon fly, most likely Mesembrina meridiana. I know it sounds silly to say that a fly can be beautiful (just look at the off putting hairy abdomen), but I found it fascinating. OK, I know it lays eggs in dung, but give the poor creature a chance After a good lesson in entomology, we left the summit and traversed the long but nice ridge to the southern top, Meall nan Doireachan.
Looking back at the summit: 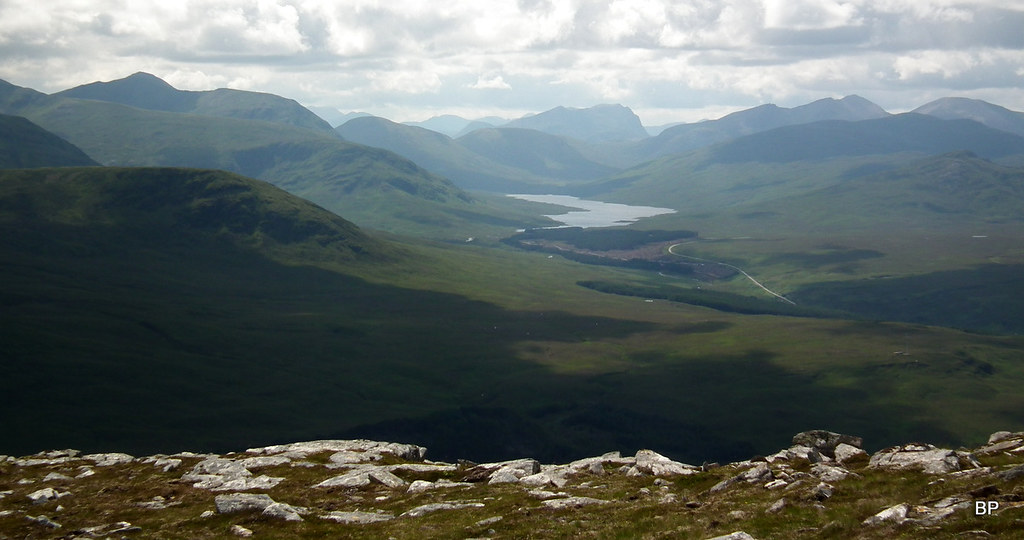 2019-07-16 beinn enaiglair 228 by Ewa Dalziel, on Flickr
What a fantastic day it turned out to be in the end! The Fannichs ridge in the background:

2019-07-16 beinn enaiglair 231 by Ewa Dalziel, on Flickr
Kevin stopped every five minutes to take more panoramas and I was far from blaming him for being slow today. In Scotland, you never know when the good weather will show, so when it does, take the full advantage of every sunny minute!

2019-07-16 beinn enaiglair 237 by Ewa Dalziel, on Flickr
The final descent to the road is a bit stony in places, but nothing a mad cat couldn't cope with 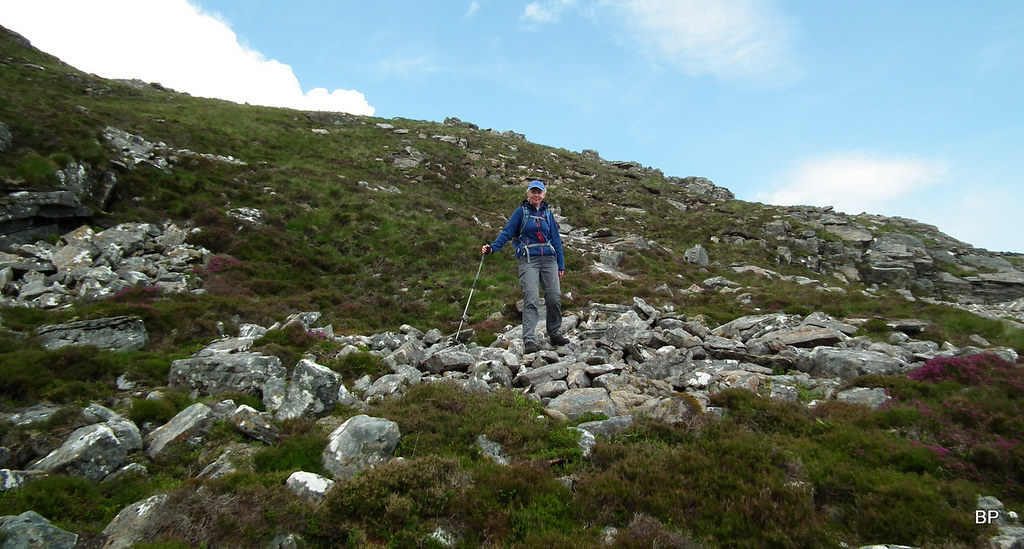 2019-07-16 beinn enaiglair 243 by Ewa Dalziel, on Flickr
Meall Leacachain and Meall nan Doireachan from below:

2019-07-16 beinn enaiglair 256 by Ewa Dalziel, on Flickr
Having done the full circular route, I think this is the best way to explore this duo but there are more options, including the path contouring the Corbett or a possible connection to Beinn Dearg (via the top of Iorguil) for a longer day. One way or another, these are very entertaining lower mountains and great viewpoints, really worth a visit when weather smiles

............................
My next trip report will take us away from the mountains, if only for a single day. We'll spend some time on the cliffs, share a few minutes with our feathery friends and face a scary-looking thunderstorm. TR in progress.

Thanks, your reports do give good ideas for some different routes

gld73 wrote:Thanks, your reports do give good ideas for some different routes

Just trying to be original... Some of the local hills we had visited several times and each time we looked for a different option. Except from Ben Wyvis which we always climb the same, boring way

Cracking report as always BP! Your fly might be a Giant Tachinid Fly, we saw one recently too and I thought it was a bee without stripes 🤪