Gambling with weather & tides on Eaval

Gambling with weather & tides on Eaval


We'd had an enjoyable couple of hours exploring the prehistoric sites on Beinn Langais, but our main objective for today was really Eaval: the highest summit on North Uist. The start of the walk crosses a set of tidal stepping stones (or so we thought), and with high tide forecast for late morning we'd decided to wait a bit before driving all the way along Loch Euphort to the walk's start. Anyway, after getting down from Beinn Langais the tide was on its way down. The delayed start meant we were taking a bit of a gamble with a summit view given the slowly deteriorating weather, but the forecast for the rest of the week was worse!

Eaval.gpx Open full screen  NB: Walkhighlands is not responsible for the accuracy of gpx files in users posts

"Roadends" sculpture (one of several on the Uists) by the car park, with Eaval behind: The weather seemed to be making one last effort at being kind to us as we set off along the track, but we could see that the blue skies weren't going to last. 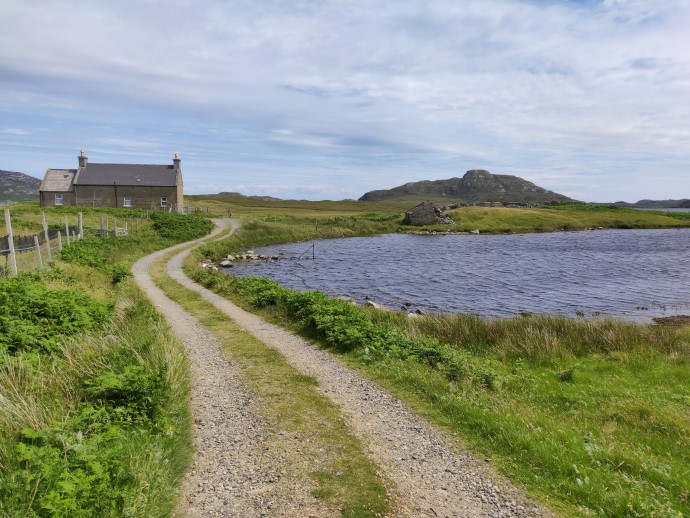 The track soon peters out but a path continues across the moor; the stepping stones are reached about a kilometre from the start: It was about 1.5 to 2 hours after high tide when we reached the stones, and as you can see they were easily crossable. In fact it appeared that the high tide mark was just below the level of stones anyway. We also later met a couple of groups of walkers returning to their cars who must have crossed the stepping stones pretty much at high tide. So my guess is that the stones are more affected by rainfall (i.e. when the outflow from Loch Obasaraigh is in spate) or exceptionally high tides rather than by normal tides. The path bifurcates at a few points and you can choose whether to follow the shoreline or cut across the moorland. We generally stuck to the shore route. We'd been expecting a boggy afternoon, but although a little soggy, the going was actually pretty reasonable. Certainly no issues with wet feet, anyway! Further around the loch there are a few sandy beaches to cross. Eaval looming ever closer: And so... onto the climb! There's a faint path for most of the ascent, though it's easier to follow on the way down. Pleasant going - not too steep, short vegetation underfoot, and ever improving views: We met this gorgeous little fellow (a vole?) just below the summit: The weather was miraculously holding as we reached the summit. The sky had long turned overcast and it was a bit murky, but nothing to stop us enjoying such an unusual viewpoint. A good introduction to the Uist landscape - or should that be waterscape? Soon after we'd soaked up the view, a few wisps of cloud started obscuring things, and the first spots of rain appeared. Looking south it was clear that things were only going to get worse, so time to beat a hasty retreat! The rain was fairly light - the heaviest passed over the sea to the east - but it was enough to smother Eaval in cloud for the whole of our return to the car.

We'd got to the summit in the nick of time... later in the week we wouldn't be so lucky

Users browsing this forum: Bramble, DocWatson, lawrencesweeney, Will578253 and 92 guests