our_route.gpx Open full screen  NB: Walkhighlands is not responsible for the accuracy of gpx files in users posts
It had been over two weeks since my last day out thanks to a particularly nasty winter cold

. However, that time spent on my sofa had allowed my to create a bank of walks on the hills relatively near to home and this was one of those. I was feeling a bit sore after football on Friday night so wanted a walk that didn't involve any steep slopes but still put some miles in my legs.

I parked at the village hall in Traquair, walked along the B709 to Damhead and started up the track to Camp Shiel. After a short distance I headed up the adjacent hillside to join the excellent path marked on the OS map. I took a wrong turn on this shortly afterwards but was able to rejoin it easily enough.

I love these well drained paths which are a feature of walking in this area. Continuing on the path I eventually descended to the very remote dwelling of Glengaber. This was an eerie place and God only knows who would spend time here.

I lunched by Black Sike before climbing to the col between Glengaber Hill and Peatshank Head where I branched off to take in the latter's summit. From here I skirted round Old Hill to reach the new track by the Lewenshope Burn. This lead to a new house at Lewenshope Hope. It took some looking to find the path through the forest but fortunately I had anticipated this problem and had Google Earthed the route the night before.

In the lee of the wind and sheltered by the forest I was hot and stripped to just a base layer, despite being the middle of January. After crossing a track the path began to fizzle out but I managed to follow old tracks to reach a large fire break which lead directly to the summit of Minch Moor. The light was beginning to fade but I knew I would be on obvious paths for the rest of the walk.

The summit of Minch Moor was a wonderfully serene spot at this time of day and I could still make out the Eildon hills, Broad Law group and Dun Rig horseshoe despite the moon overhead. From here it was just a case of following the SUW past Minch Moor bothy back to the car. I passed this strange sight en route which was rather grandly called "Resolution Point". 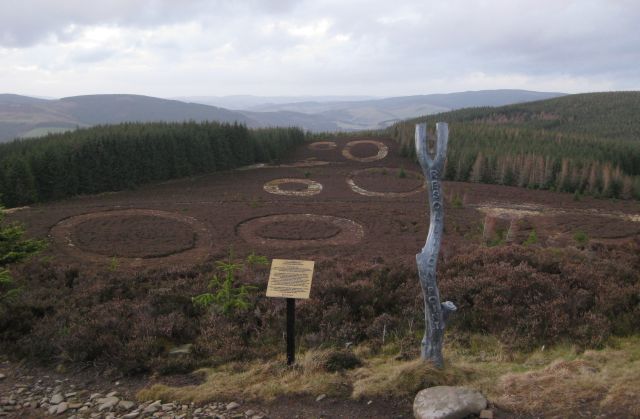 this strange formation is apparently meant to encourage heather re-growth... Looks like a nice route too, and well photographed. Lots of the Southern Uplands are fairly similar to the lower Angus, Moray and Aberdeenshire hills. I always find it difficult to get particuarly individual or memorable images in these kind of hills, something you seem to have managed here.

Hi
It looked a nice walk. How do you feel after doing a long walk soon after being ill?

walked this in sept, and spent the night in the Bothy, I also won £100 walking Minch moor.

Rekrab wrote:walked this in sept, and spent the night in the Bothy, I also won £100 walking Minch moor.

malky_c wrote:I always find it difficult to get particuarly individual or memorable images in these kind of hills, something you seem to have managed here.

Well I had plenty of naff ones as well

- I had to wield the axe fairly widely before settling on a few.

Merry-walker wrote:How do you feel after doing a long walk soon after being ill?

Fine. I had had 10 days of rest (other than work) so was pretty sure I was back to full health.