Back in the groove

Back in the groove

It is a while since I was last out (well just over a week) and even longer for George, over a month. Parminder wasn't able to join us due to school runs etc, he is available for tomorrow so I am the lucky one - hitting the hills 2 days running. This was going to be a good test as to how my fitness levels are progressing after my injury problems.
The forecast, like the previous weeks in August was changeable but we could cope with a few spots of rain. I know George likes to visit 'new' hills so I selected a couple that weren't too far away, George kindly offered to drive. The obvious problem we face when we head south or west is congestion, I suggested to George we leave at 7.30am and stop for a coffee at Harthill on the M8, that way we would hopefully miss the usual gridlock in Glasgow. It was an excellent idea, however things didn't go according to plan. I have never stopped at Harthill before and won't be doing again, firstly westbound only seems to have a filling station and M&S. Not a problem, we saw a parking area but couldn't find the way into it, so in frustration we abandoned that plan and took part in the Glasgow congestion. Our route would take us to places neither of us had ever been to firstly Kilbirnie, where we stopped for coffee and then Lochwinnoch. The plan was to tackle Blaeloch first as that would be easy and we would be back at the car with dry boots.
We would be parking in a nice parking area fairly close to the Clyde Coast & Garnock Valley Crematorium - that looks fairly new and is a few miles from any built up area.
Once kitted up we set off along the track.

George showing me where we are heading

The map without George's finger

The way ahead, this track must have cost a few bob to make

Yes here they are

A few more of our "green" friends 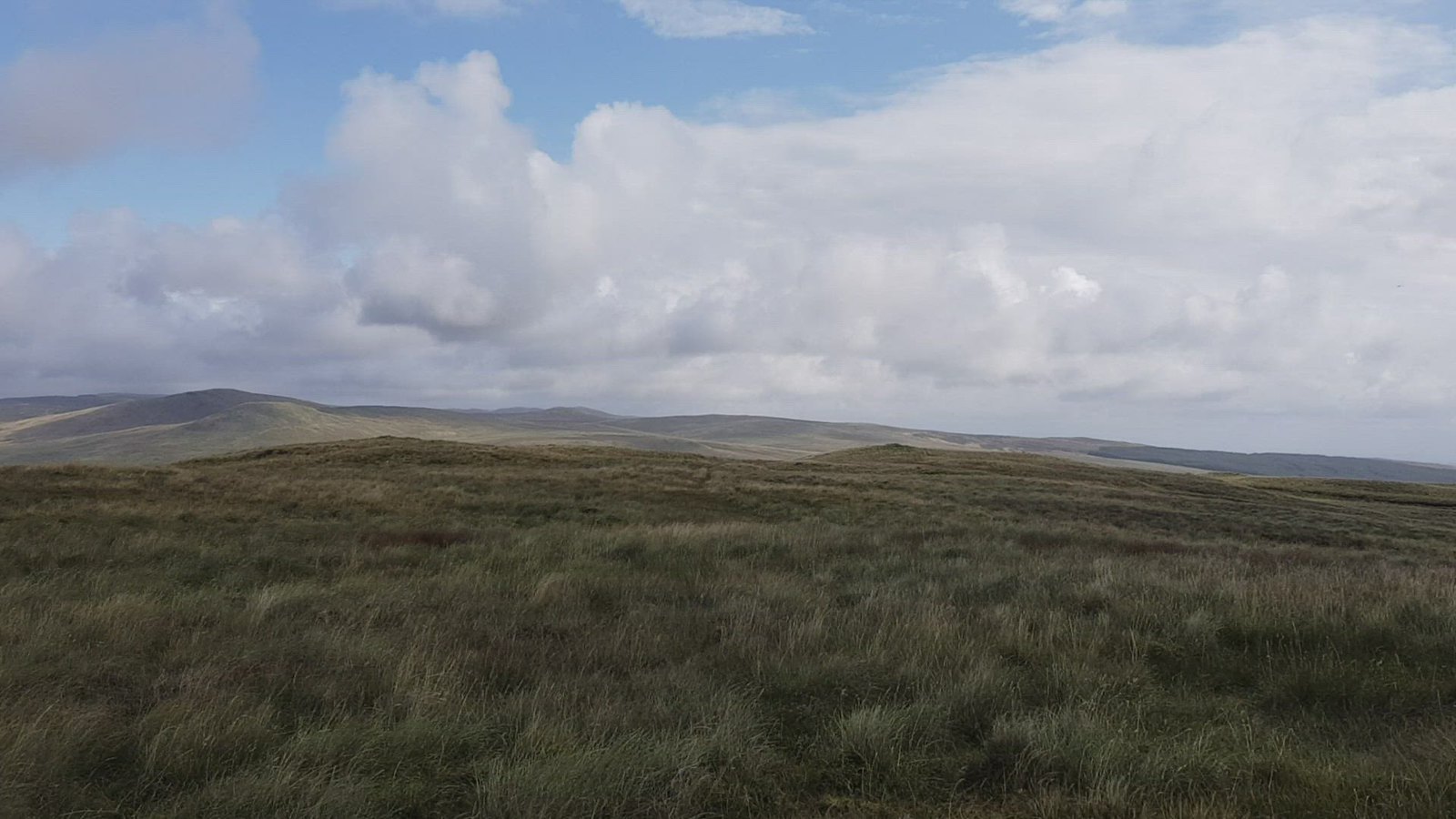 Video taken from the summit of Blaeloch Hill

Descending now, we opted for the direct route back to the track

Once on the summit which took us 50mins we surveyed the surrounding terrain and the direct route looked pretty similar to what we had enjoyed on the brief ascent after the track, so decision was made and 30 minutes lates we were back at the car. We kept our boots on for the drive back along to Lochwinnoch then up the single track road to Muirshiel Country Park main car park.

We arrived in the large car park which had a few big puddles and one other car parked. There is a large building that has toilets and an office where there is a park ranger, along with a charge point for electric vehicles. I had a close look at the charge point as I am curious as to how much a charge costs? There are no charges printed so if anyone is able to spill the beans please feel free? I find it rather odd that all garages have to display how much fuel costs, but charging points don't.

The rangers building and vehicle

The other end of the building, toilets etc

A couple of dog walkers ahead 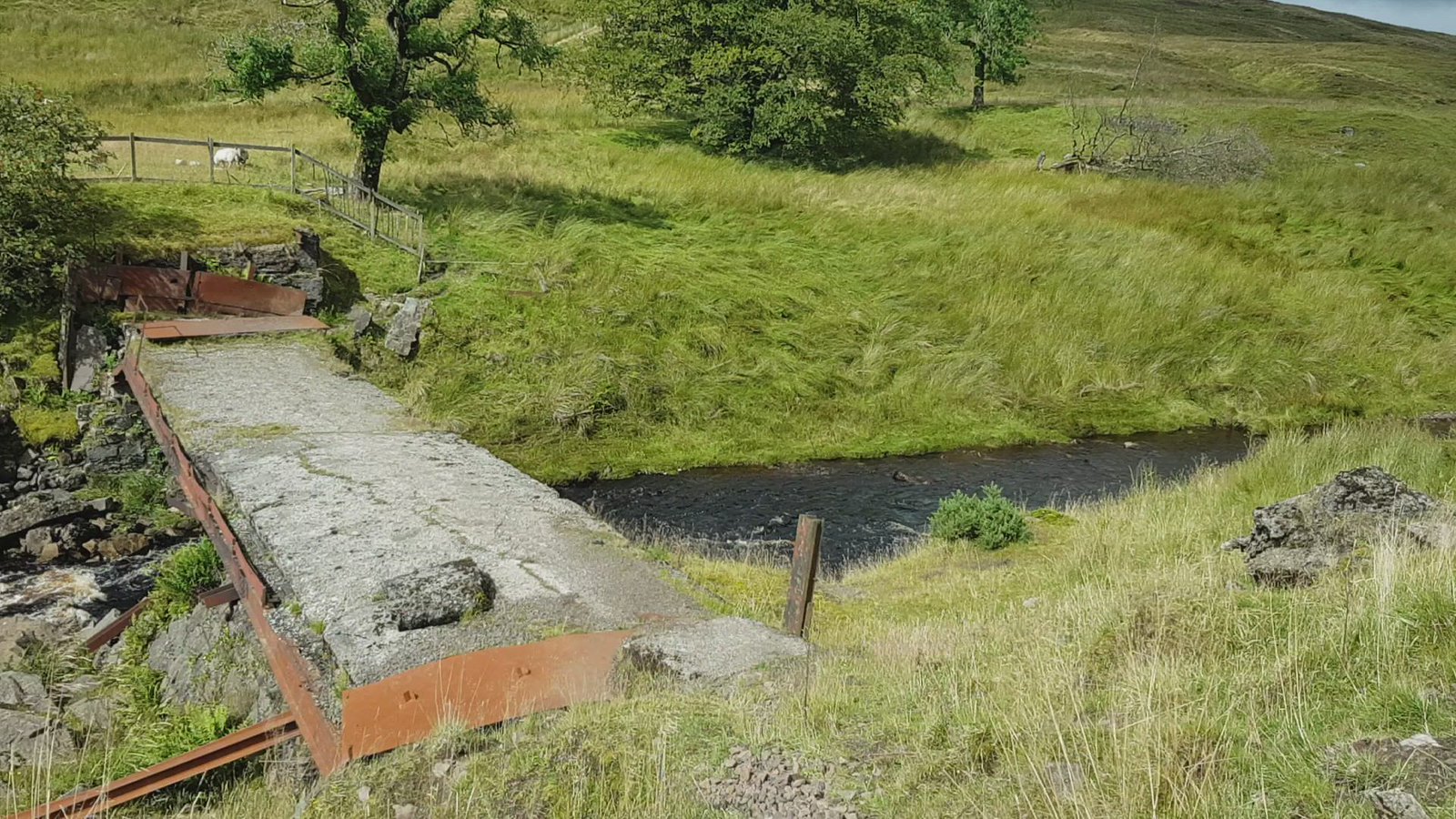 Looking back down the path

The way ahead nice gradual incline

We took the left fork in the path

Interesting facts, you will have to Google to see what was mined

We behaved ourselves and didn't climb over the fence

Quite a bit of debris at the bottom

The way ahead, faint path to follow, wouldn't last long though

Another fenced off area

George loving the going up bits

A bit damp ahead

George marching along behind me, it wasn't that way a few months ago

George leading for a few minutes

You can see the faint path

George much happier now - descending, we would cross the burn as the terrain on the far side was more walker friendly

Not far to our "unsafe" bridge

A huge thanks to George for driving and this turned out to be another cracking day, the weather played ball, apart from a wee shower on the descent. My boots were rather damp on the outside so they wouldn't be ready for tomorrow's outing, so once home it was a matter of getting everything ready for Parminders arrival. Beinn Bhuidhe to follow.

It's not often Lochwinnoch gets a mention on Walk Highlands 😂 On my daily commute to and from work. Blaeloch is my "local" hill, being just a few minutes drive up the road from me. I battled the bogs of Stake from the Largs side. Can't say it made it any easier.

Thanks Martin a good report of a good day, but Munro's are easier by far, on Meall Ghaordaidh yesterday and it was a piece of cake against Hill of Stake.