I walked Windlestraw and Blackhope Scar a few years ago and while it was an achievement, it was middling tough. Someone told me Windlestraw was easily accessed from Innerleithen, so remembering that the second half of the trip had been massively harder, I decided on the easier option of Stow to Innerleithen.

From the train, I hared up the inconvenient ridge that's the easiest way in. Looking back I could see Sell Moor Hill. Nice country, but I've twice been within 500 metres of the summit and not been able to muster the enthusiasm to bag it. I took this photo of the way forward. 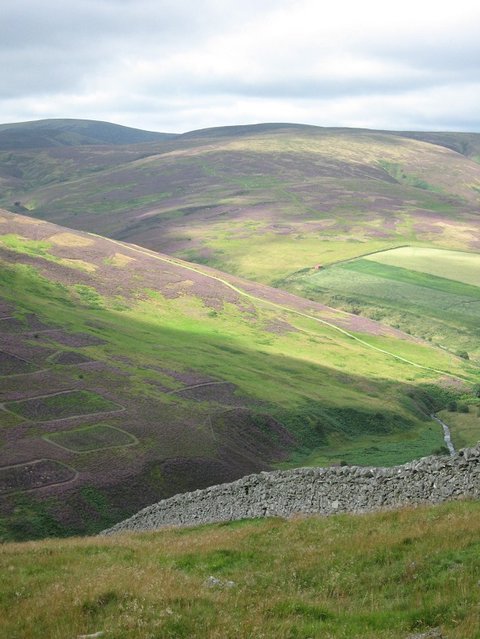 There's a small red barn just above and to the left of the centre of the picture. Getting there was the most extreme hour's walking I've had this year.

I had to choose left or right of the wall. I chose left. Wrong call, I was descending deep heather to avoid thick bracken. The wall was beautifully made and I wasn't climbing it for fear of doing damage. I'd to negotiate frequent steep rubble outcrops and the wall looked like it would herd me a few hundred wet metres in the wrong direction. In fact there was a faint path and a broken bit of the wall with wooden support that I negotiated. I went about 50 metres along the path, tripped and fell full length. I thought I'd encountered a broken fence. No, my boot was caught in a rabbit snare. 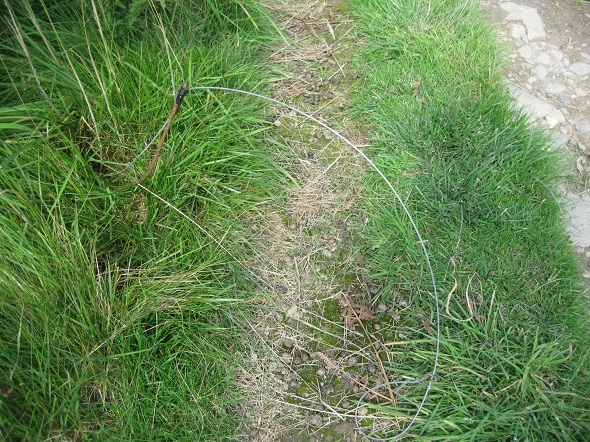 I've never seen one of these before but I encountered another 100 metres later when I joined the track.

I crossed the burn and looked at the thick fern and drystane dyke that barred my way. I recrossed the burn and took another bridge, not the right direction but fewer obstacles. It looked straightforward to rejoin my route. On a warm day it had seemed a great idea to be wearing shorts. I encountered rusty barbed wire (full marks to the Paramo shorts for not snagging), nettles, ticks and new tree plantation. At the barn, I was absolutely hammered. 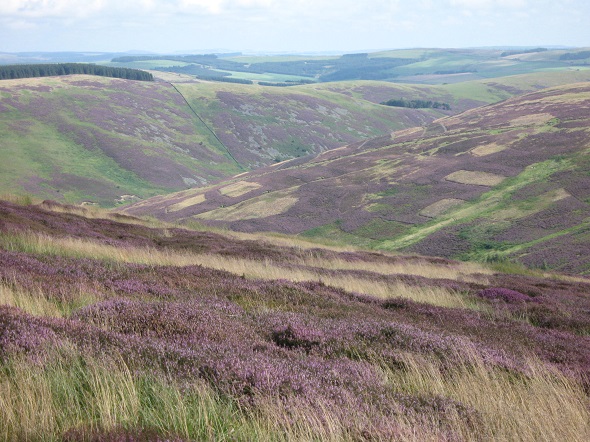 Up on to Deaf Heights, I looked back - the way I'd come seemed harmless. The camera then ran out of electricity.

That signalled the start of typical Moorfoot bog. I was inaccurate jumping over one bright green area and was really relieved when my foot emerged and my boot was still on. I took it off and wrung out the sock then remembered I'd a spare pair at the bottom of my rucksack. It takes a tiny thing like that to lift your morale sky high!

I got to Windlestraw Law. It's got good views. The way on to Innerleithen was easy, barring a 100 metre ascent to Priesthope Hill. A lot of the descent from Kirnie Law is through dense dead looking pines. I was beginning to anticipate an attack by Orcs. The entry into the town is over a pretty little Hobbiton bridge. There's a pub opposite the bus stop with an attractive looking range of real ales but the bus came in sight so I sighed and let them go.