After yesterdays outing I was raring to get out again, I was feeling fine but was going to have to use my old Salomon boots which are anything but waterproof. I was well prepared to get wet feet as I know there is a proper bogfest once you reach the top of the glen, no matter how carefully I picked my way across the bog I couldn't avoid getting wet feet.
As we were planning to use our bikes, Parminder offered to drive and attached his fancy bike carrying contraption onto the boot of his Beemer. For anyone who hasn't tackled Beinn Bhuidhe a bike will save about an hour or 6km each way of walking.

Out of the car park, turn right

Over the River Fyne

Then turn left, unlike Parminder who for some reason went right. Note the puddles, wet feet on the menu

The hydro track on the left would be our descent route 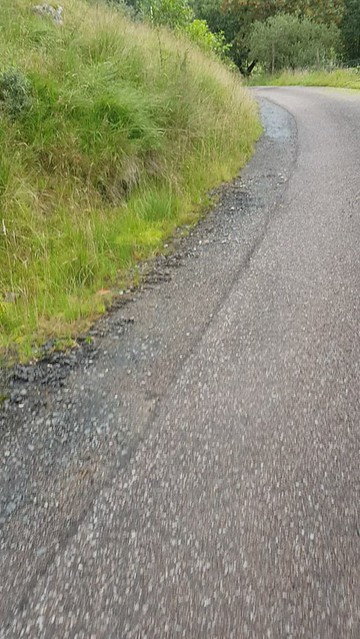 Took a wee video on my phone whilst cycling, looks like I am going quite fast but we weren't

Tarmac road turns into a track with puddles

The hydro pipes coming down the hillside, we presumed the helicopter was used to ferry workers up & down the hill

The bike park, there were 6 bikes attached before we arrived

The reason for the bike park, locked gate and a kissing gate

Time to battle the bracken

Parminder revelling in tackling the bracken

Nice waterfall, wasn't going off the path to get a closer photo

Water feature, one of many

Looking back along the glen, the way we came. Plenty of forestry work already happened

Bracken is now history, the path uphill is easy to follow

Time for the rain showers, not only were we wet on the outside it was also very humid

Won't be long before we will be in the cloud

Looking back from slightly higher up

One for the lovers of clouds

At the top of the glen the hydro track is reached, we would head down that way later

Parminder contemplating following the track, badly eroded and only ATV's would be able to continue

Looking down on the first bit of bogginess, the track can be seen in the distance

It looks boggy & it was

Bog now behind us, a bit of serious ascending

Could have been a great view

Follow the obvious path slightly uphill to the summit

On the summit we had a chat with 3 other guys, one of them Tam would join us for the descent. He had left Glasgow at 6am on the "weekly" bus and his return bus was about 6pm, so he was going have a few hours to relax. Tam had walked all the way in and ascended via the usual downward route. The descent down the hydro track was ideal for him, however we had to walk a couple of miles back along the road/track to fetch our bikes. Anyone who is contemplating using the track with bikes take note.

View of the work from the other side

Looking back to our start and Loch Fyne

This is where the hydro track joins the road

After the trudge back on foot to get our bikes, it was a joy to freewheel along the road.
A huge thanks to Parminder for driving and his banter and to Tam for his company on the descent, hopefully you didn't miss your bus. Just managed to finish this report in time as we are off out again tomorrow - it is tough being retired!!

Thanks FF for another great script of the day out..

Cheers for sharing your walk with us