168 miles completed while looking for Lizzie

168 miles completed while looking for Lizzie


Not many will make this their final stage on the GGW - it's just the way it worked out for us doing it in stages from home. It was also our final part walking from Glasgow to Inverness, which gave the day an extra significance - although no one would have known that except for us.

Gairlochy is tricky by public transport so we left the car at Laggan Locks, took the bus to Spean Bridge and arranged a lift to Gairlochy with taxi driver Al in his shiny smart Mercedes. On the short journey we discovered Al had driven my friend Ian to the far end of Loch Arkaig on two occasions. A good man to know if without transport in these parts.

Moira and Al by the canal at Gairlochy We crossed the bridge, had a quick look at the canal and headed up the minor road signed for Loch Arkaig. It brought back memories of February 1992 when a group of us booked a house for 8 overlooking the canal with the hope of skiing on the Nevis range. But that year there wasn't enough snow for skiing so we did other things instead. At the GGW marker we turned off the road along a path that runs parallel to the road before leading across it and down to the edge of Loch Lochy. It was a while since we'd left home so we found a place for a coffee stop close to the water. There was a sign saying no fires but we saw evidence of several in the area. To be fair there was no litter, just rings of stone around charred wood. Loch Lochy is the third deepest loch in Scotland and is said to be the home of Lizzie, sister of Nessie who hangs out in the even deeper waters of Loch Ness. We'd not heard of Lizzie - she can't have the same PR going on as her better known sibling. 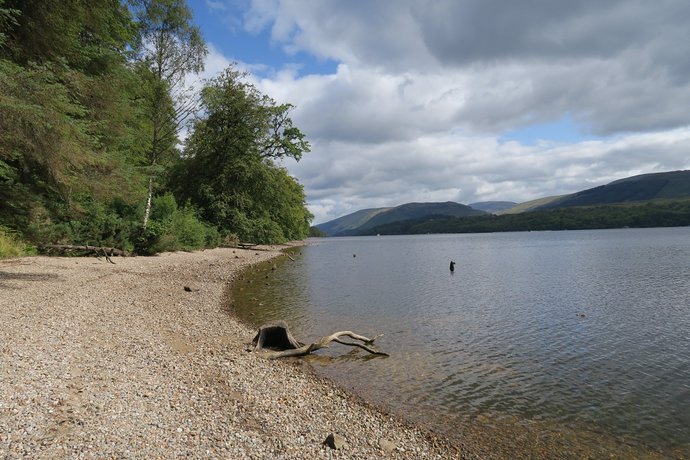 Looking at this calm blue expanse of water it seemed unlikely anything monstor-like lurked there, but one never knows, so we kept a sharp lookout as we continued along the lochside path. The next fallen tree we came to was a good example of the circle of life with new trees growing out of the upturned stump. Not that their prospects of longevity look too great but still a good effort. Has anyone seen Lizzie? The route leads back to the road and passes the entrance to Achnacarry, immortalised by DK Broster in her trilogy "The Flight of the Heron", "Gleam in the North" and "The Dark Mile" following the fortunes of some notable Camerons around the time of the 1745 Jacobite rising. Achnacarry was the seat of the Camerons burnt down by government troops for their support of Prince Charlie. I've vivid memories of a wet family holiday when my mum kept us kids entertained with stories of 'what happened next' as we drove around the western highlands in a steamed up car. Well done mum for a great idea! No tablets then, except the kind you take for a headache.

For old times' sake, if it hadn't been an extra 2 km, I'd have liked to see the museum. Maybe another time. 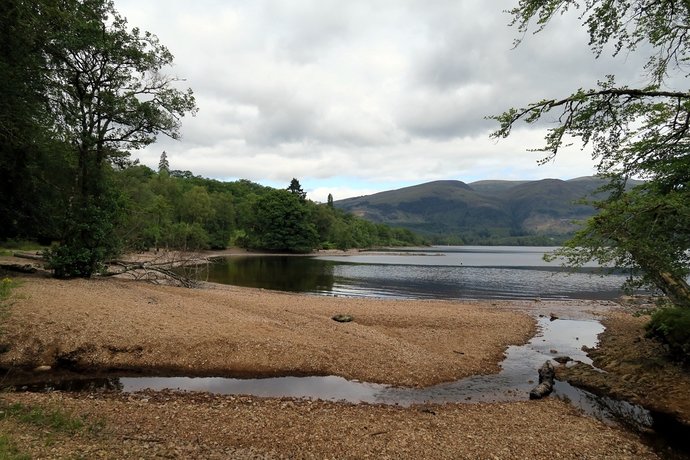 The Commando Memorial on the A82 is much photographed by tourists but probably few know of the important part this area played in the training of elite troops for WW2. In 1942 a commando training camp was set up at Achnacarry, the site chosen due to its remoteness and severe weather. The commandos were an elite unit, trained for the most difficult operations. On D-Day, commandos went ashore on the flanks of the landings and carried out specialist tasks such as reinforcing the airborne troops who had landed in the area of Pegasus Bridge, or capturing the small port of Port-en-Bessin.

We caught up with a group of tourists from the US with their US guide telling them about the D-Day landings beside the remains of an actual landing craft used. I briefly wondered why they were so interested until I remembered it was America's war too. 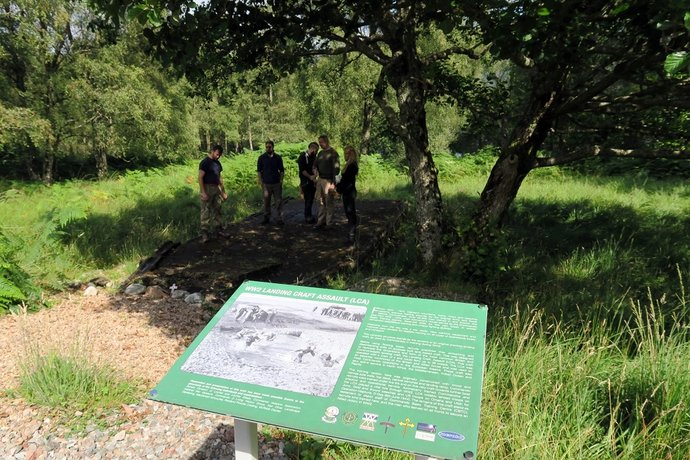 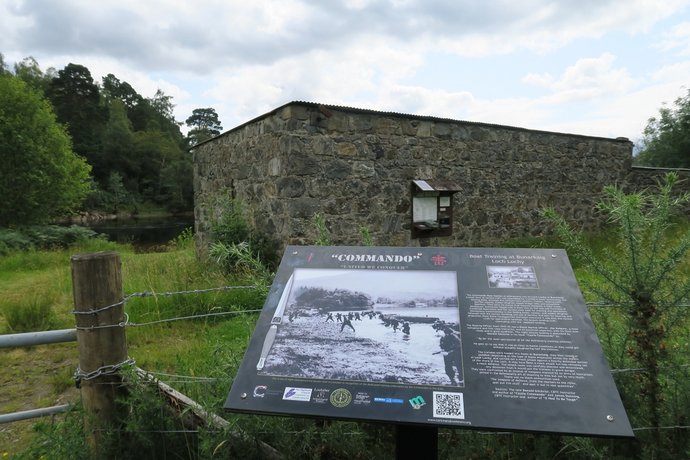 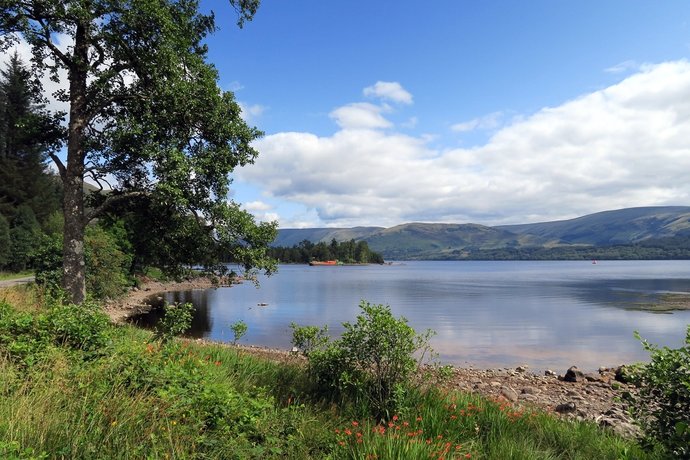 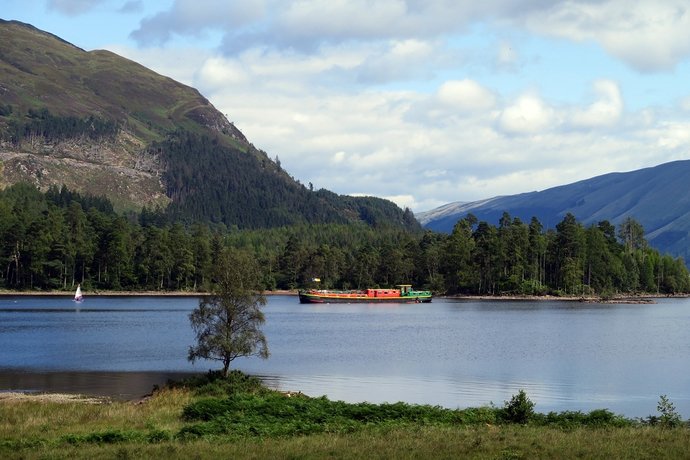 Orange flower Montbretia, a non native plant, so invasive it's an offence to plant in the wild 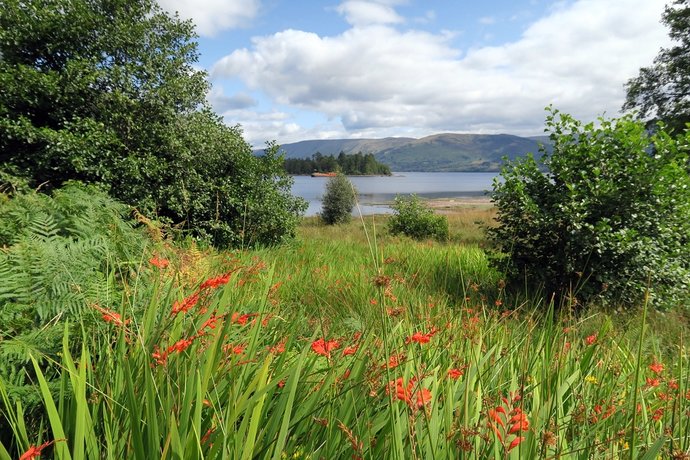 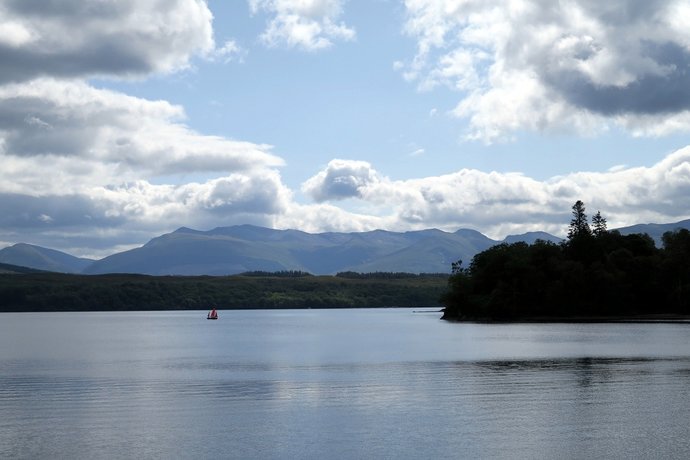 Zoomed to Ben Nevis from River Arkaig at Clunes 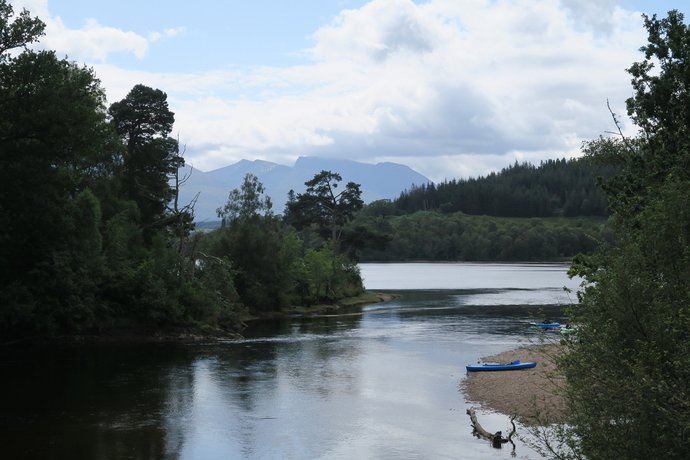 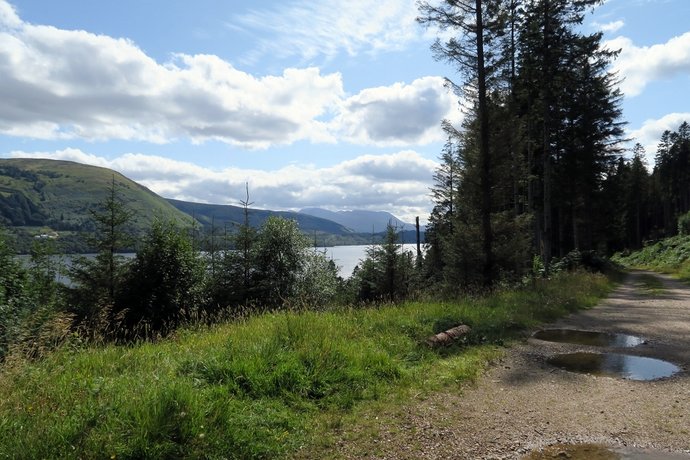 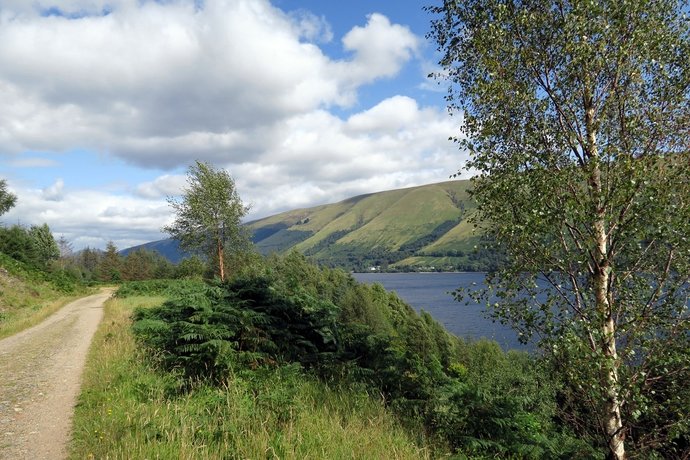 A parallel track above this one gives access to the Loch Lochy Munros. We climbed Meall na Teanga with Jack and Tess as part of their training for Ben Nevis back in 2008. 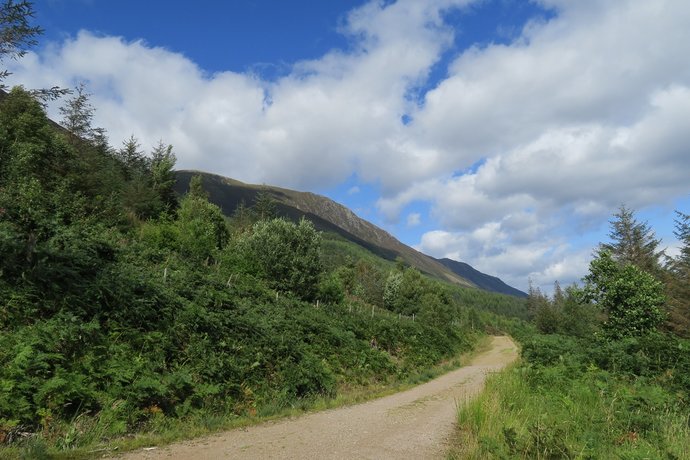 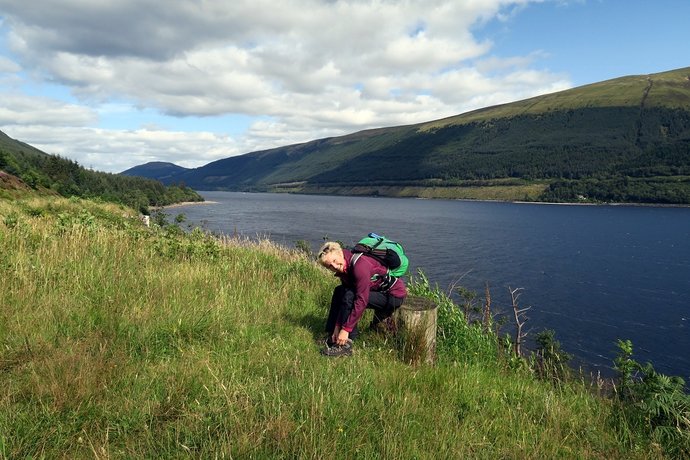 Last look back at the Ben 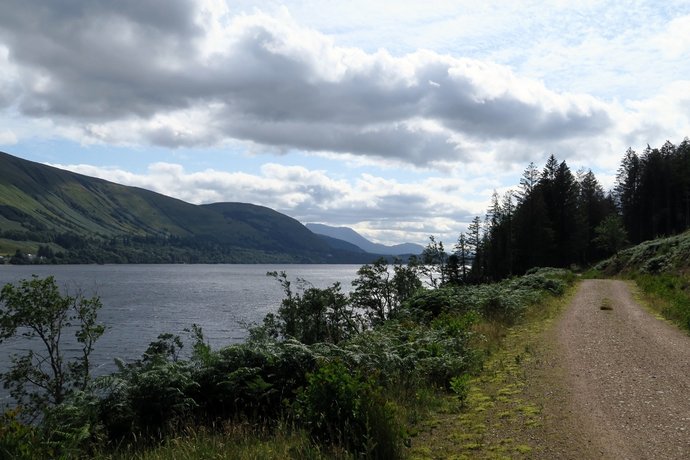 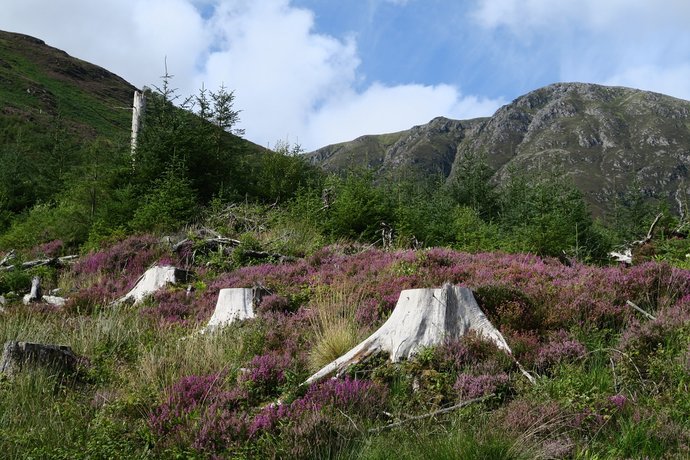 Reaching the farm at Kilfinnan brought back memories of the April day in 2015 when Mary slipped in mud and broke her ankle coming down Ben Tee. Before the helicopter arrived an ambulance turned up at the farm and paramedics searched around for the casualty with me waving furiously from the hillside above. They never did see me and it wouldn't have done much good if they had, as they weren't equipped for a stretcher rescue on foot at that distance. 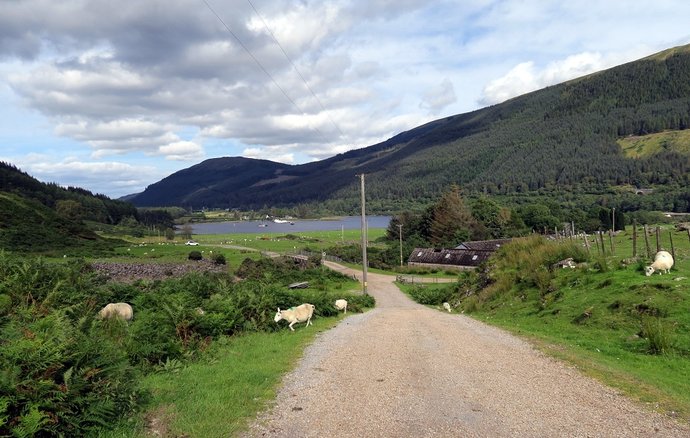 Near the farm is the burial ground of the Macdonnels of Glengarry, moved from its original site when the building of the canal raised the water level of the loch enough to cover it.

We crossed the canal at one of the lock gates just before it was opened for boats to go through. I would have gone through it when we sailed the canal to celebrate my dad's 80th in 2002 and kind of wish I had walked the GGW back then as the canal journey would have meant so much more. It was fun but more on the level of managing the boat through the locks and cooking in the galley than for properly seeing the scenery around us. 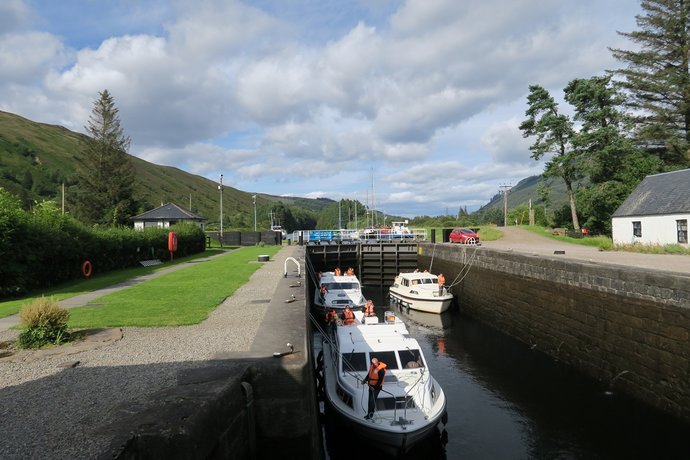 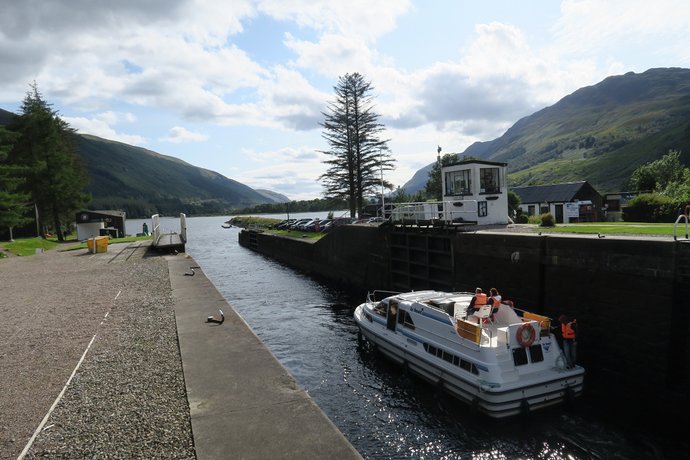 Back at where we had left the car we could have gone to the Eagle cafe to celebrate finishing the 168 miles from Milngavie to Inverness, but we still had food with us so sat down at the canal side instead.

Did we see Lizzie? No we didn't. But that didn't take the shine off what we'd done. The WHW and GGW together offer a great long distance route which we thoroughly enjoyed and reckon going at walking speed is absolutely the best way to see Scotland - and as a bonus doesn't clog up Highland roads with motor homes in every available space!

Lovely walk and report. Not heard of Lizzie, but I have heard of another of Nessie's cousins called Morag who lives in Loch Morar https://www.bbc.co.uk/news/uk-scotland-highlands-islands-21574832 Funnily enough, all the sightings seem to have been made by hoteliers or B & B owners in the area

Not heard of Lizzie either but sounds a good walk with great photos.

Sgurr wrote:Lovely walk and report. Not heard of Lizzie, but I have heard of another of Nessie's cousins called Morag who lives in Loch Morar https://www.bbc.co.uk/news/uk-scotland-highlands-islands-21574832 Funnily enough, all the sightings seem to have been made by hoteliers or B & B owners in the area

It worked for Inverness. International visitors want to see two places in Scotland. Edinburgh which is obvious and Inverness which is much less obvious - except that they want to go to Loch Ness.

shredder wrote:Not heard of Lizzie either but sounds a good walk with great photos.

This walk has more going for it than the possible presence of eels in the loch.

Sgurr wrote:Lovely walk and report. Not heard of Lizzie, but I have heard of another of Nessie's cousins called Morag who lives in Loch Morar https://www.bbc.co.uk/news/uk-scotland-highlands-islands-21574832 Funnily enough, all the sightings seem to have been made by hoteliers or B & B owners in the area

It worked for Inverness. International visitors want to see two places in Scotland. Edinburgh which is obvious and Inverness which is much less obvious - except that they want to go to Loch Ness.

Years ago, before the Iron Curtain fell, we went to then Czechosovakia and a waiter asked us where we came from. He said "I can't travel, but I can ask my customers to send me a post card. Please will you send me one of The Loch Ness Monster."

This brings back good memories.

I had a horrible 5 days of weather on the West Highland Way followed by 4 brilliant days on the Great Glen Way - guess which one I prefer??

This section of the GGW was really enjoyable and fairly easy walking.

I noticed on a previous thread that you did a high level route one day - I think that was opened after I did the walk in 2013 (wow - 6 years ago!!).

... but seriously, congratulations on a massive achievement. I agree with you, walking is the best way to see Scotland and to have time to chat to the people we meet. Great photos - as usual