Young Sammy came into our lives five months ago, rehomed from a farm in England. He had never lived in a house, been around traffic, into a pub or up a hill before. Having tested to destruction that he could be happy in the house and pub, we thought it only right to move on to starting his Munro list.

We took a sneaky Monday off work as the weather looked like it might be the last spurt of summer, so camped overnight at Carie wood, and made it to the Brae of Foss carpark at 8:00 am with only a single cup of tea each to fuel the start. Fortunately, Sammy was raring to go. There is a nice gentle start to the walk to wake up the legs, and the weather was looking fine and clear. The path is well-maintained, and great for those less confident in navigating. Easy to see why it is such a popular first Munro. When the incline started, those of us who had enjoyed a wine or two the night before were starting to regret our choices, but Sammy being largely teetotal (except for an occasional nip of Laphroaig, he's only human) was definitely feeling the most perky. Being surrounded by glorious heather in the sunshine led to a rousing group rendition of wild mountain thyme, which kept up the enthusiasm for another seven minutes or so. 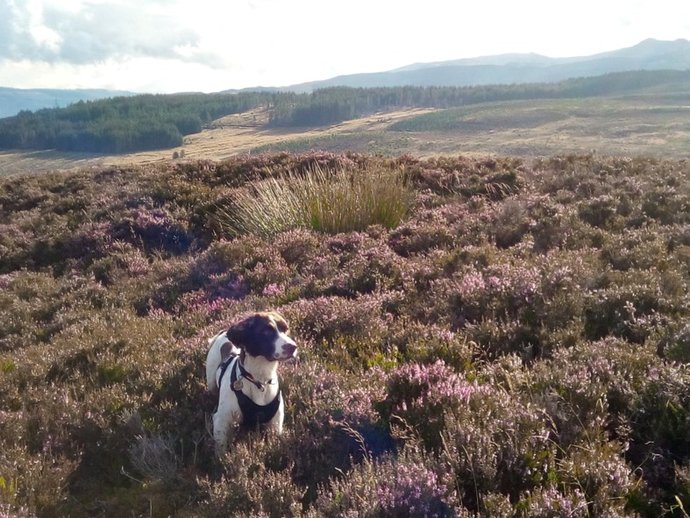 Reached the top of the path proper, and on to the boulders. As is always fortunate at this stage, couldn't see the actual summit, so maintained the self-delusion that it wasn't too far. The wind was really picking up at this point, gusting around the exposed parts (of the mountain, to be clear), and making chatting difficult. Sammy, who was previously leading from the front with enthusiasm, started to check frequently that we were still insisting on pursuing this nonsense. Picking our way across the boulders felt like it took a lot longer than the distance would suggest, although at least it was a clear day at the top and so navigation was a matter of heading towards the up looking parts of the hill, rather than anything more complicated. A wee pit stop for lunch in one of the shelters (thank you whoever made the effort to build that!) helped immensely. Finally, a push for glory made it up to the summit. Well done Sam! Beautiful views, and the wind even did us the courtesy of dying down a little so we could sit and have a nip while admiring our efforts. Sammy misheard due to the wind, and had a nap instead. With a couple of breaks and a sit at the top, it was three hours after we started by the time we headed down. We diverted to the left side of the slope with fewer boulders, which was clearly a better route when viewed from the top. With the wind almost completely gone (gone where?!) and coming up to midday, it was feeling pretty tropical as we sauntered down. Sammy, being a true Scot at heart, was feeling perturbed by the temperature. We stopped for regular water breaks, then he solved the problem himself by finding a bog to cool off in. At the top of the hill. In August. We discussed rehoming him onwards when we reached the bottom of the hill. It took about two hours to get down, including a slow traverse of the boulders, and a rather more rapid slide down part of the path due to a misplaced foot. When my foot slipped beyond recovery, I made a tactical decision to go with it and roll onto my rucksack to prevent my more delicate parts having contact with the stones. I rather fancied this as a ninja-style drop and roll manoeuver, but after some minutes of wiping tears from her eyes, my wife informed me it was rather more akin to Winnie the Pooh rolling down a hill. Reached the bottom in good spirits, delighted with the luck of the weather, and the views, plant and bird life. Definitely don't dismiss Schiehallion as just a "popular" hill, it was a cracking few hours out of the city. We rewarded ourselves with a pint, Sammy included.