Tackling a large number of Munros over multiple days is an adventure, but it's certainly not the easiest way.
So when I was presented with the challenge to take Kevin on his first overnight trip,with the aim for him to love it, I had to rethink my previous strategy of monster walks and sore bones for something more manageable.

I know some of you, probably read about those long days, think wow, but never think to pack a tent and head out yourself. So maybe this report will help you to change your mind and head out for an adventure which won't kill you.

After all there is something quite special about carrying your tent and having the freedom to sleep wherever you might fancy.

I had thought long and hard where to take someone who wasn't keen on backbreaking expeditions and most important plant a seed to want some more. The Cairngorms came to mind where I had spent many adventurous days and had fallen in love with the spectacular countryside.
The Cairngorms also has an advantage whereby you can tackle the hills from so many angles, that even repeat visits always feel different.

We set off from the Ski Center. Yes I know it is not the most exciting place, but it has the advantage of a secure car park and the fact that you tackled the first 600 meters up already. It was already afternoon

but that's another plus when taking your tent..early mornings before a 180 mile car journey are not required.

Both our backpacks were around the 12 kilo mark. When heading out aim to keep your backpack weight as low as possible and if you can not over 15 kilos.

Slow and steady we climbed up to Cairm Gorm, were we nearly got blown of our feed when we reached the 1141 mark. At that time I just hoped we would find a suitable spot, sheltered from the winds. At least there would not be midges

, When we reached the summit the wind had eased a tiny bit and we stopped to take some photos and eat some snacks. In the distance we could see Ben Macdui, which I looked forward to, as the last time I climbed the hill, it had been raining with no visibility.

Views from the Cairn Gorm and the path ahead


We took a route I had not walked before and I enjoyed seeing the Cairngorms again. Specially the Corrie ahead it's pretty amazing. The walk across to Ben Macdui is pretty easy and a wide path meant that I did not have to concentrate on navigation and was able to enjoy the views. 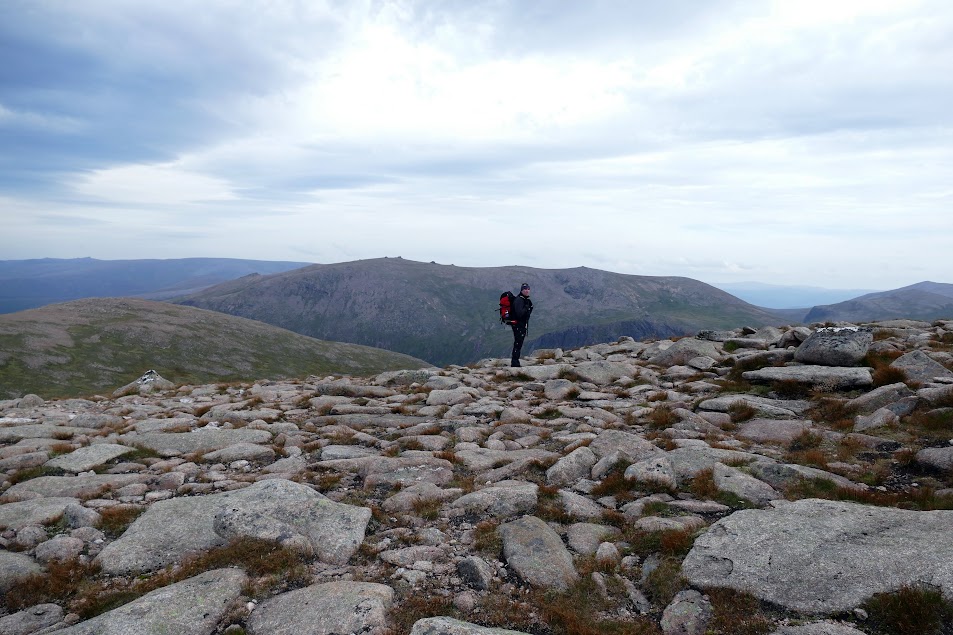 Kevin with Beinn Mheadhoin in the background 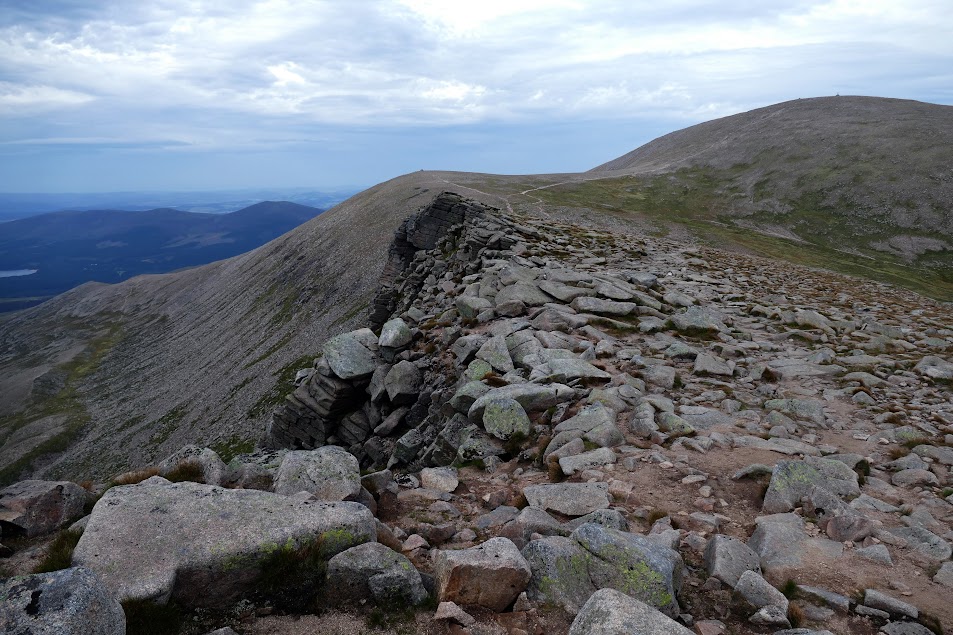 Looking back up the Cairn Gorm 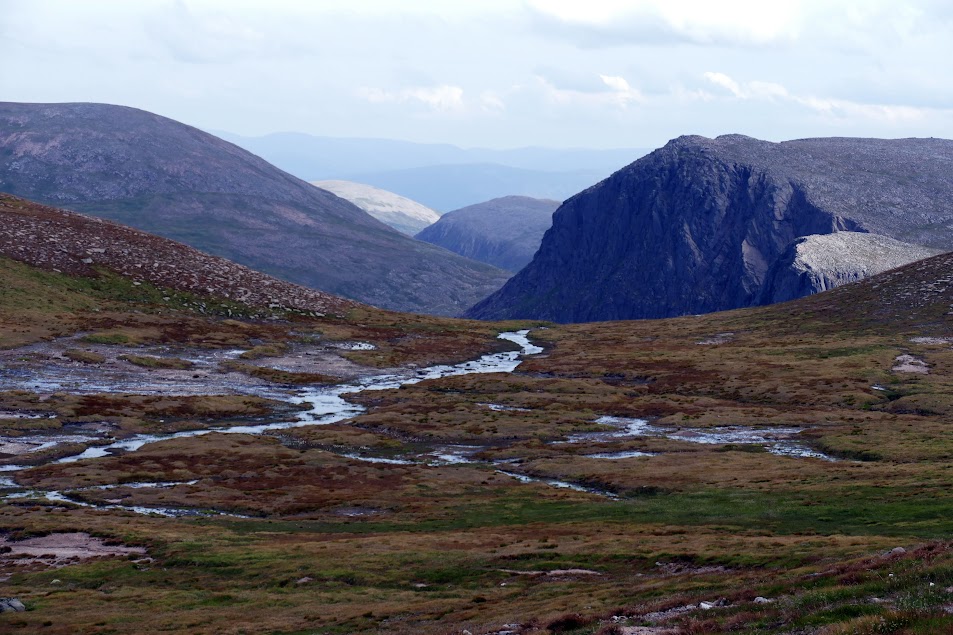 At the foot of Ben Macdui, Kevin spotted a camp spot he fancied. Another tent was already pitched further up , so we followed the un-written rule to keep as much space as possible between us and them. Personally I think there is nothing more annoying than having set up camp and someone else camps a stone throw away from you. 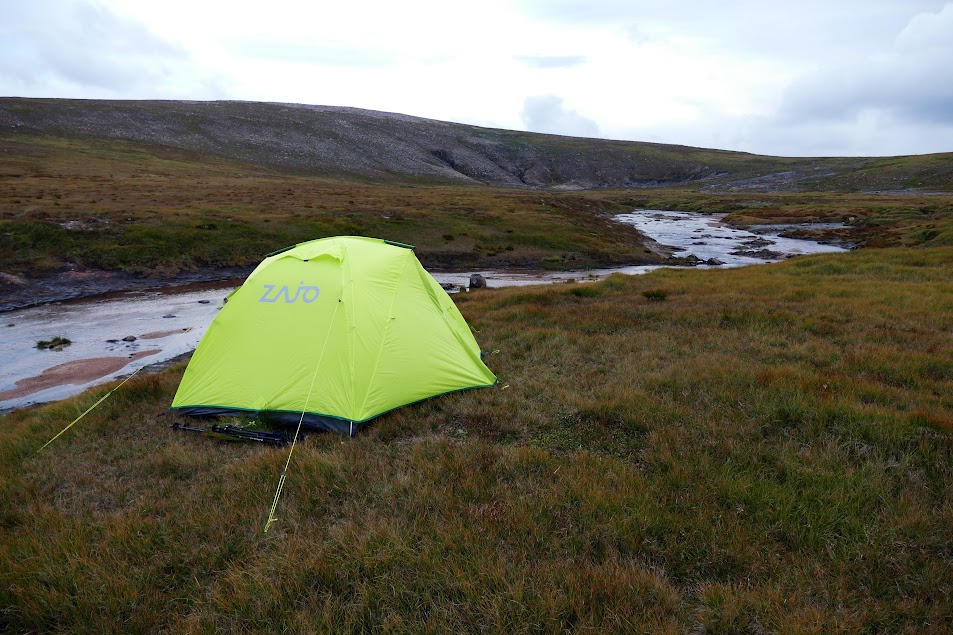 My new tent...you can see it from miles away

I had searched for quite some time to find a tent which would be roomy enough for 2, is not more than 3 kilos and does not cost a fortune. Not an easy tasks, but when I spotted the Zajo half price online I knew I had to get it. With a 8000 mm outer water tight mark, it also the most waterproof tent I ever bought. Setting up the tent was a doddle and once we dumped our bags inside we set off to climb up Ben Macdui. 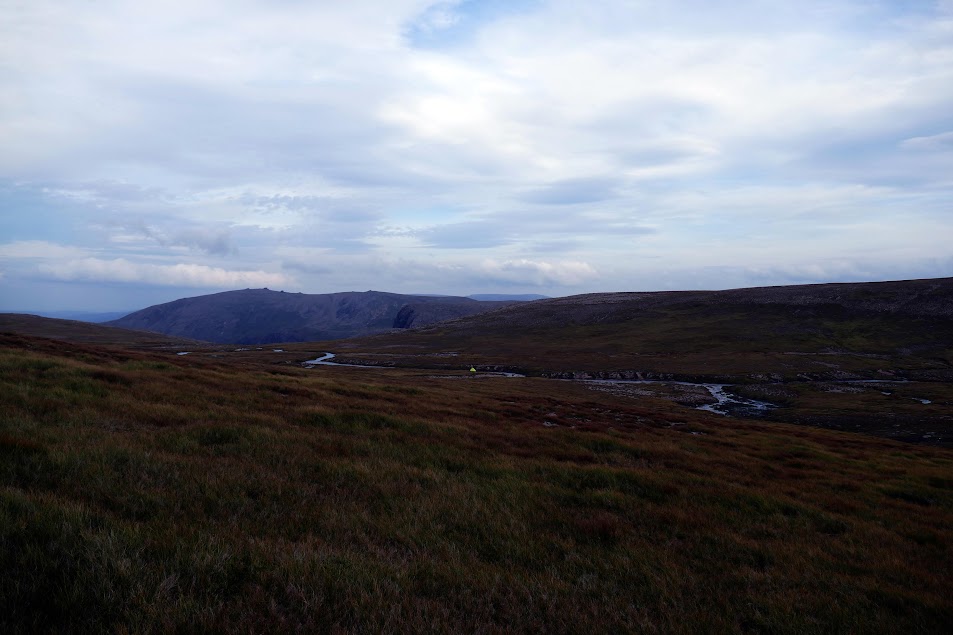 Our camp spot and easy to spot tent

As easy as the walk towards Ben Macdui is, the climb is a walk though a boulder field. Its easy to forget how large (as in distance) some of the Cairngorm hills are and Ben Macdui is no exception. The walk however gives great views towards Braeriach, the Angles Peak Devils Point. The clouds however seemed to get thicker the higher we got

We reached the top and while I was thinking how nice it is to have views, thick clouds started to roll in until the visibility was less than 10 meters 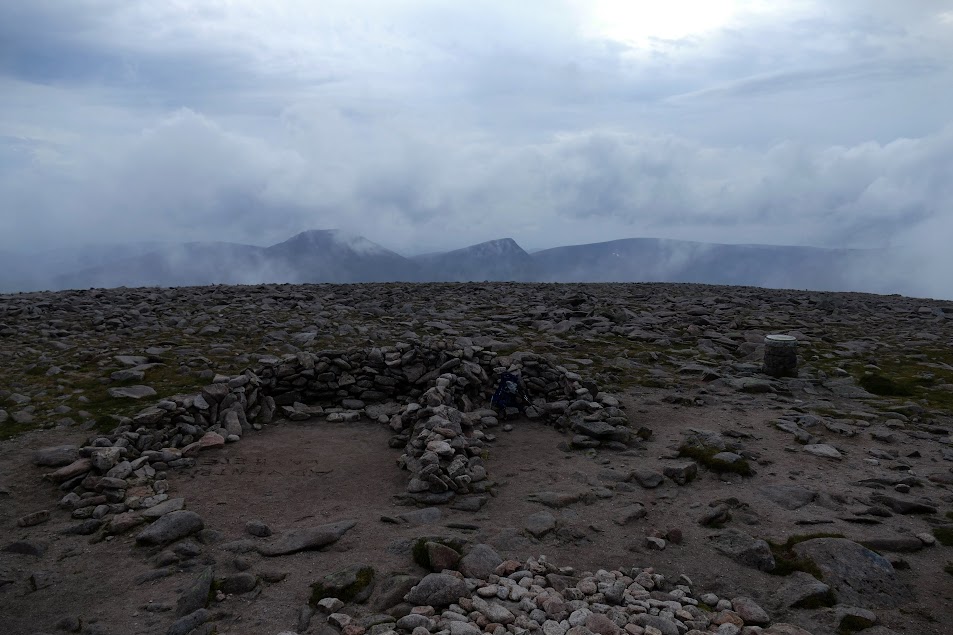 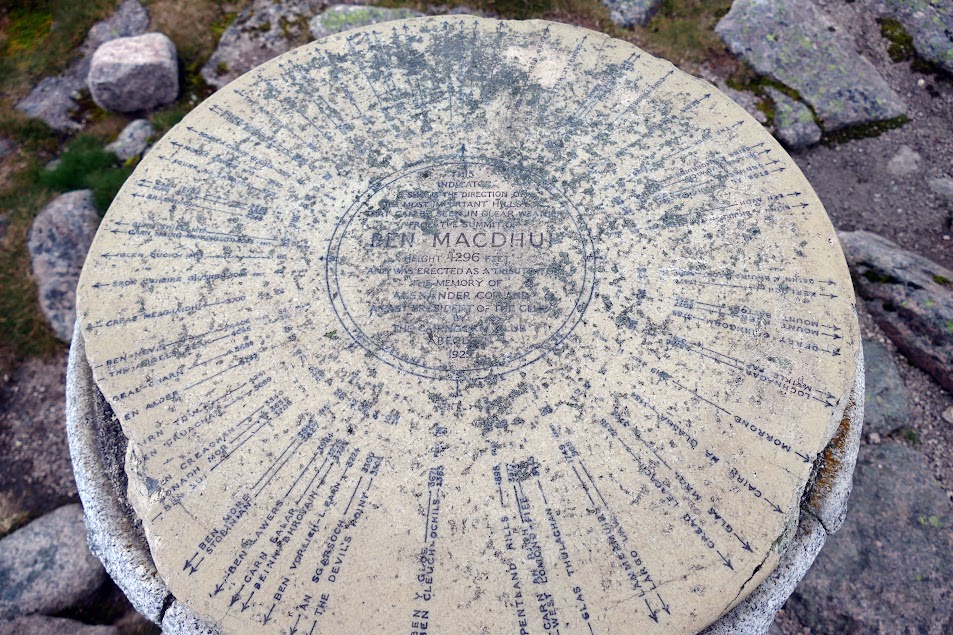 For the summit hill spotter

We stayed or ages, hoping to catch the sun set, but the clouds had other ideas and shielded what otherwise
would have probably been a lovely sunset. It was getting rather late when we decided that it was time to head
back to the tent. I did not count the cairns which had been erected to guide walkers, but I guess there must have been at least 20! 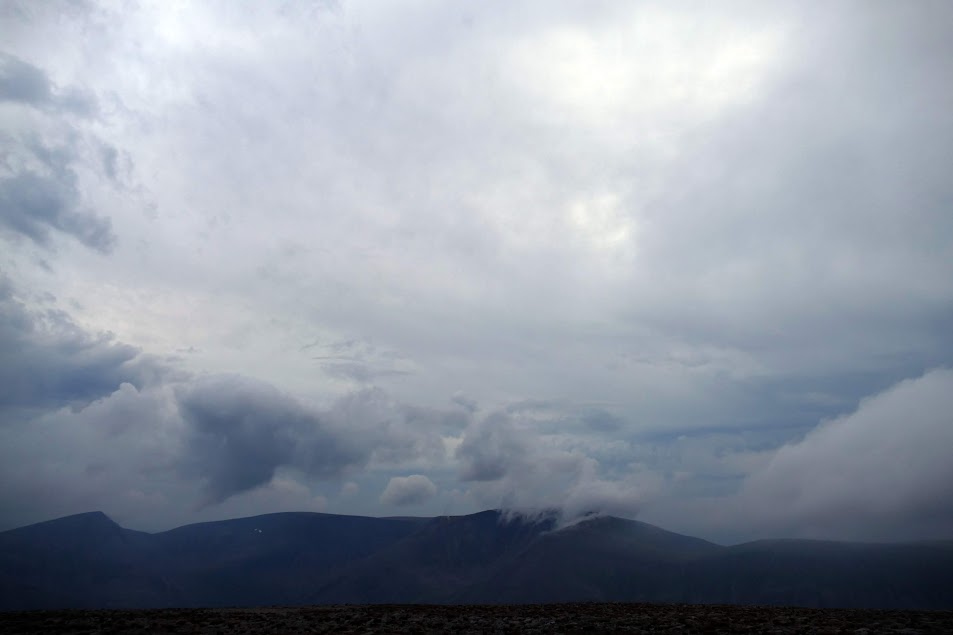 On the way back , clouds over Braeriach 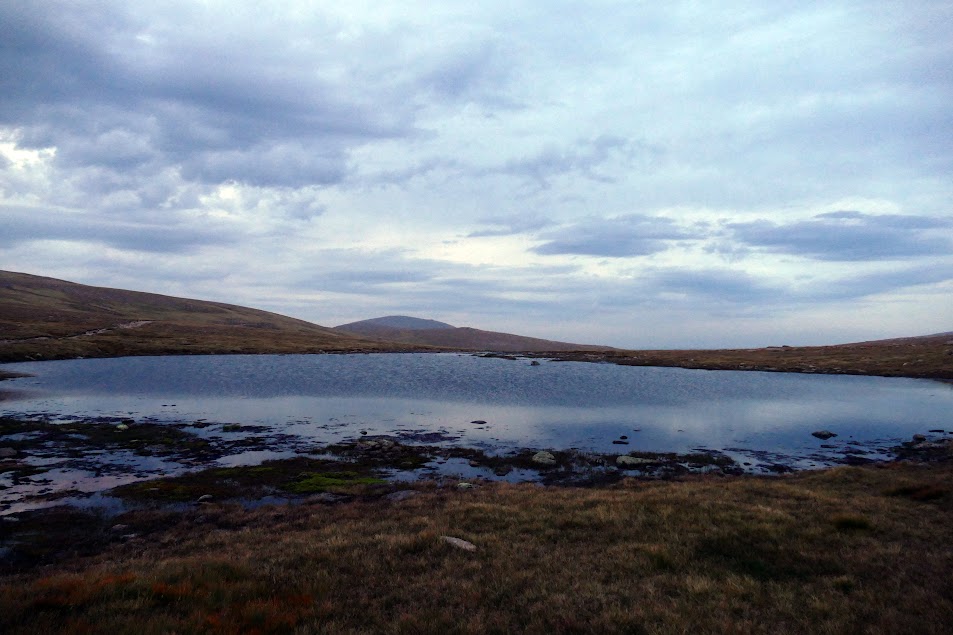 Back at the tent, it was close to 9pm and darkness was approaching fast. Stuffing our faces with food we were in our sleeping bags at 10pm and listening to the wind outside I drifted off to sleep.
One way to ensure a good night sleep is to make sure you have a comfortable mat, pillow and warm enough sleeping bag. There is nothing worse than laying on a hard cold ground, shivering while you try to rest your head on a lumpy pile of clothes. I also suffer from cold feed and one trick I have learned is to boil hot water, fill the water bottle and use it as a hot water bottle until you are warm. On a plus side you have some drinking water the next morning, when its all cooled down and disinfected by boiling it previously. 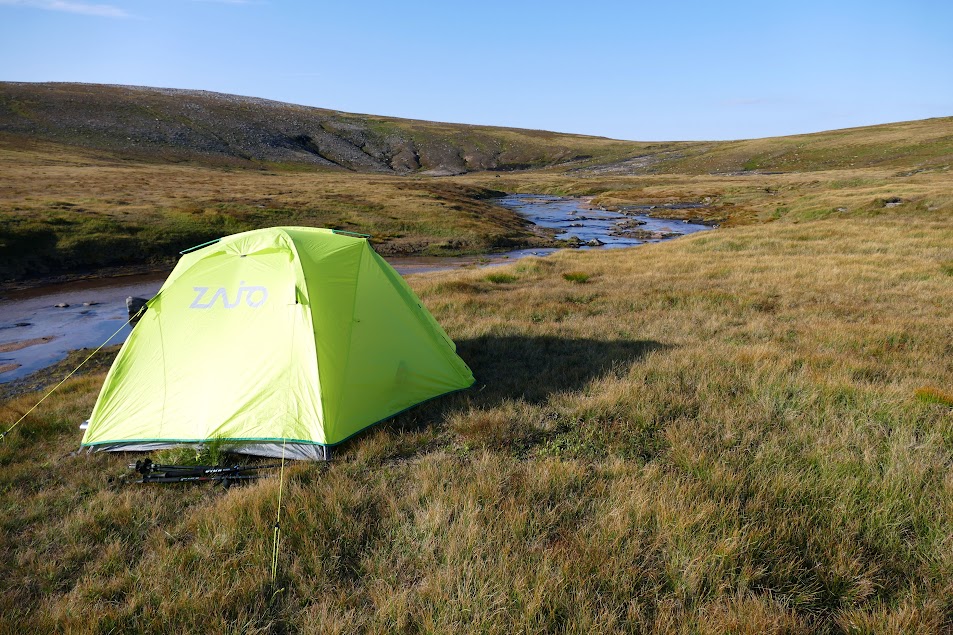 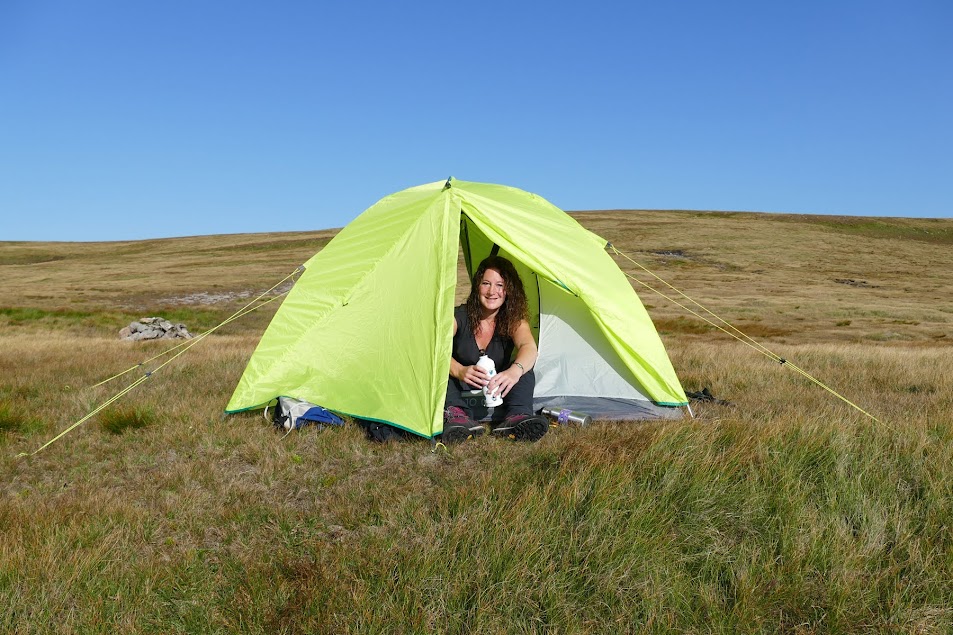 l I was woken by bright sunshine during the next morning. I think there is nothing nicer than walking up to warm and sunny weather (with a light breeze to keep the midges at bay) on top of a hill. We snoozed for a while, until slowly rising at 8am. Getting breakfast ready I had some homemade muesli bars and flavored water. Those little high concentrated flavored juice bottles you can buy in major Supermarkets are great to turn otherwise boring water into something with some flavor. Personally I am also too lazy to cook porridge, so muesli bars are my preferred choice of something nutritious, yet tasty. If you search this site, you should come across the receipt, which I posted a few years ago. 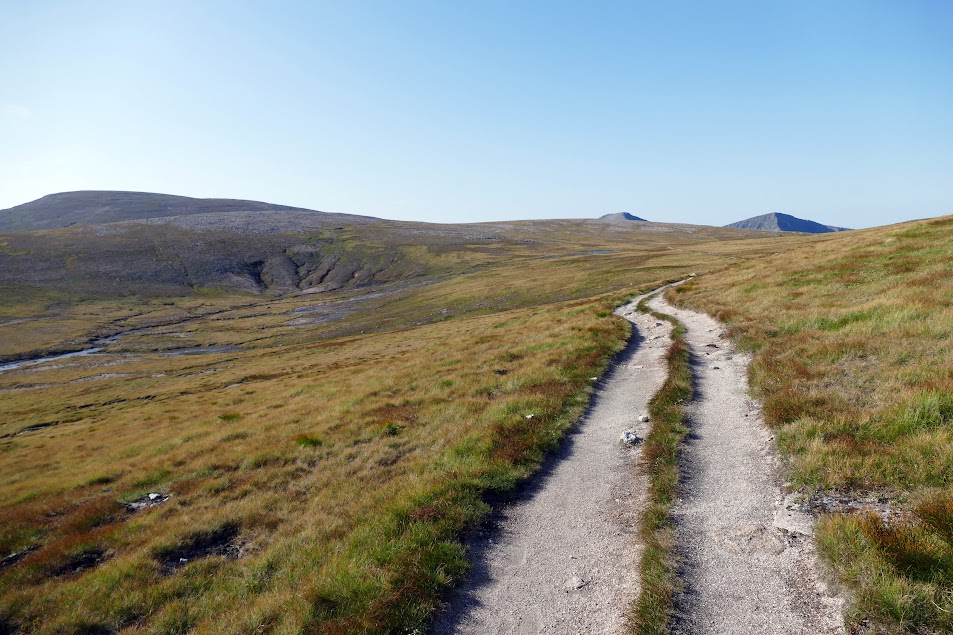 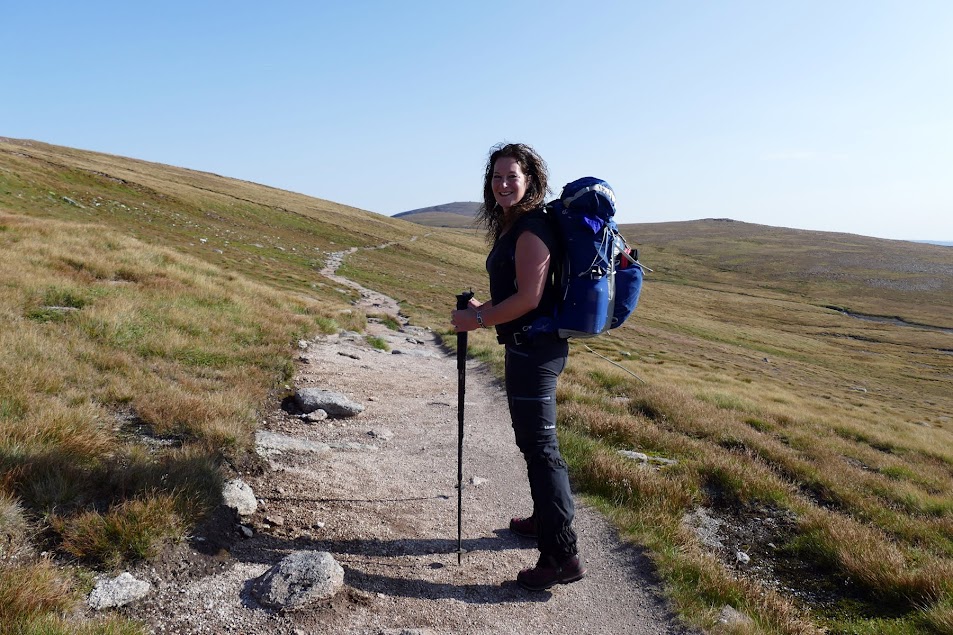 Packing up the gear, it was time for the walk back. With the sun shining, low winds it was a lovely walk and returning via the path between Fiacaill Buttress and Central Gully . It was a rather steep descent, but the views are spectacular. When we reached the open moorland which is so common for the Cairngorms, it was also nice to see the planted pine trees...It would be great to return in 20 years to see how much they have grown! This was by far the easiest camp up a hill I have ever done and it had been great. Kevin also said that he had been surprised how much he enjoyed it and that he certainly wants to be back 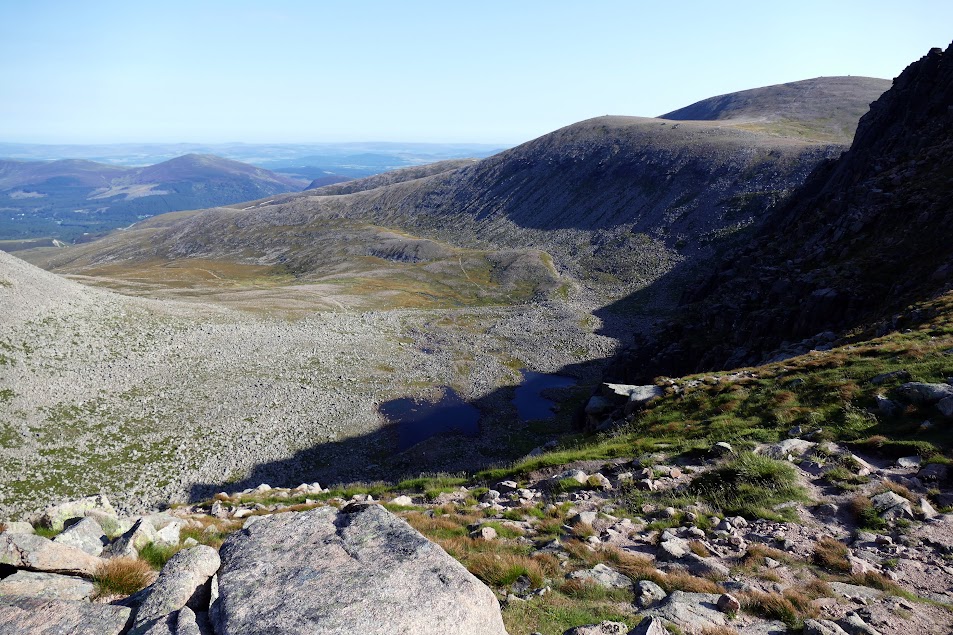 The way back down...steep but with spectacular views 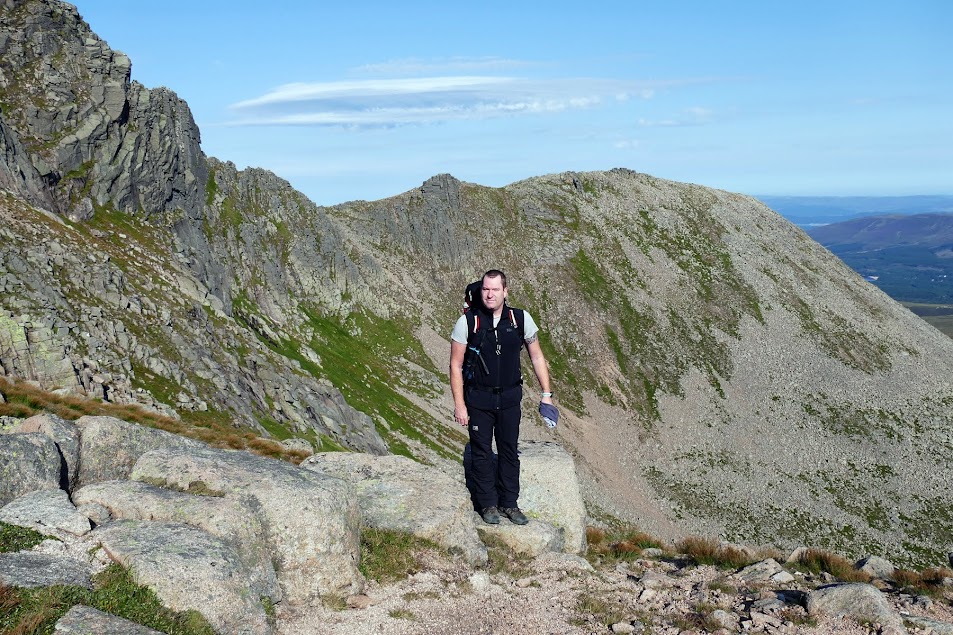 Kevin with Cairn Lochan in the background 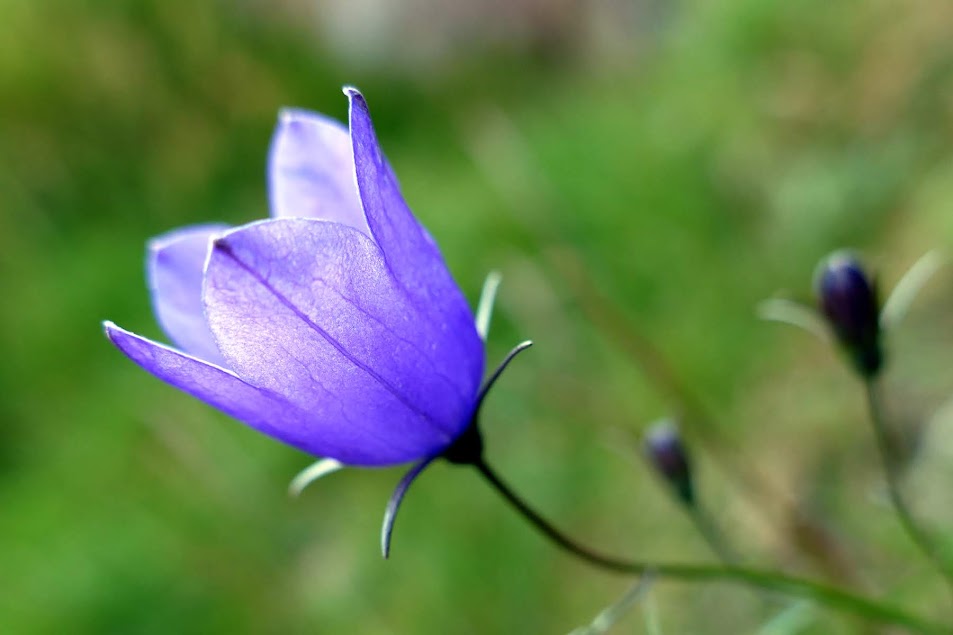 Love the shade of blue of those flowers The path in the distance 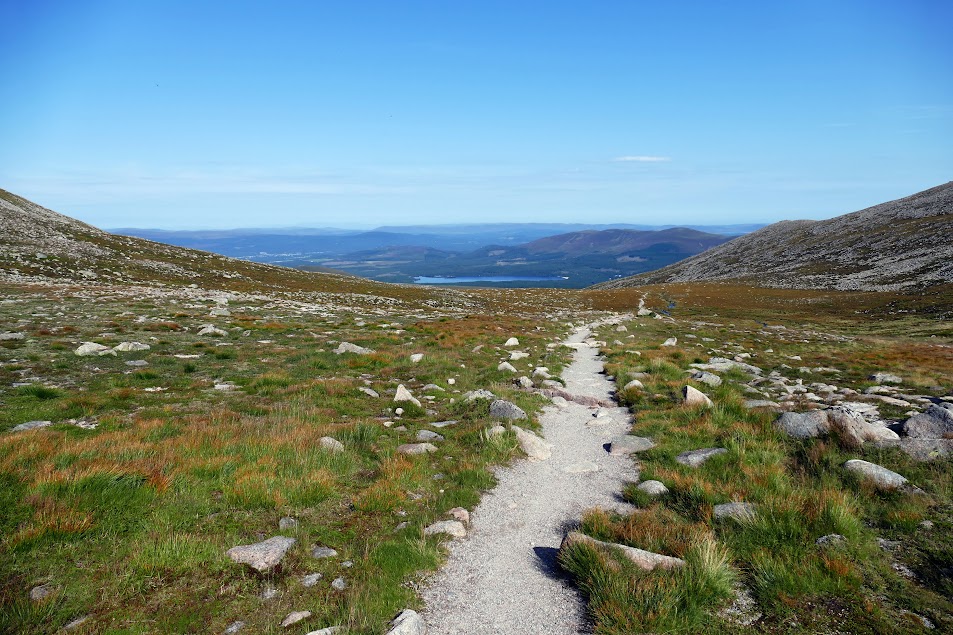 The path ahead and Loch Morlich in the distance 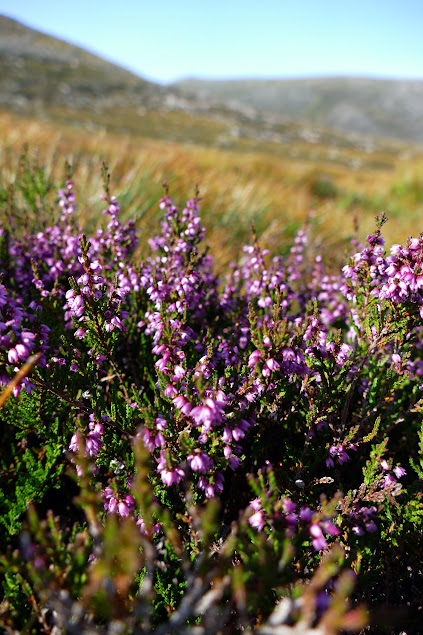 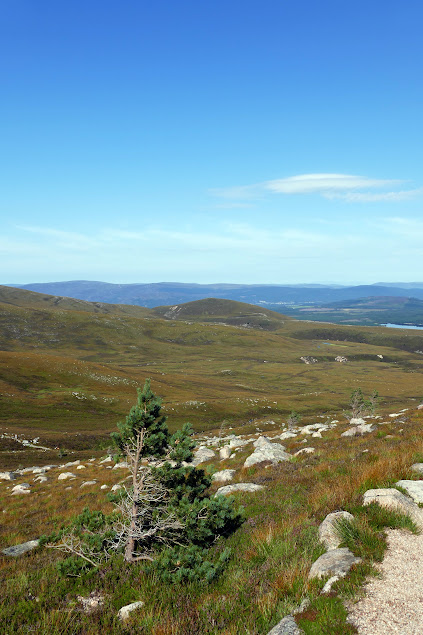 So if you are planing to head out to the hills ad haven't experiences camping up high...give it a go!

What was in my bag
Tent
Sleeping bag
Sleeping mat
Pillow
Jet boil
Water purification system
Wash kit (toothbrush, toothpaste, soap, facecloth,cream,deodorant, all mini versions of the originals)
Clothes (Spare socks and underwear,sleepwear)
Repair kit for tent and mat
Spork
Midge repellent/midge jacket
Head torch
GPS
Emergency kit (Compass, water purification tablets, ibuprofen, plasters, spare batteries for head torch)
Hill walking gear (what I take on all trips)
Camera
Food
Obviously the above will differ slightly from person to person, but it a collection of stuff that works for me


our_route.gpx Open full screen  NB: Walkhighlands is not responsible for the accuracy of gpx files in users posts
The route

Nice to read any report of the Cairngorms & see photos. Where you pitched your tent is only a short distance upstream from where my wife and I camped 4 years ago and many of the Cairngorm reindeer herd passed by while we ate dinner. Looking at the photo of you in the tent entrance, there's a wee cairn in the background. I was told a good few years ago that it was put there to mark the spot (or near to it) where those 5 kids and their teacher died in a blizzard in November 1971.

@Border Reiver, thanks for the information about the Cairn. I was wondering why it was build. I have heard about the disaster, but it did not click that the cairn is a memorial.