Catching up with old friends on Ben Lawers

Catching up with old friends on Ben Lawers

Sometime the week before, I had a call from my mate Nick, who I hadn't seen for 6 or 7 years. He was up in Scotland with his family for the first time in ages. Since I was making vague plans to head back up to Inverness at some point, I decided to drop in on him in Killin on the way past on Sunday afternoon.

The traffic up the Callander - Lochearnhead road was dreaful - I had forgotten it was Bank Holiday down south. Out the far side of Killin, I finally arrived at High Creagan, which is where Nick, Pat and Thomas had set up their caravan. After a cup of tea and a bit of a catchup, we decided we could probably do a short walk that afternoon. Beinn Ghlas and Ben Lawers were an obvious choice as they would be fairly straightforward, and also Beinn Ghlas would be Thomas's first Munro.


Map.gpx Open full screen  NB: Walkhighlands is not responsible for the accuracy of gpx files in users posts
Pat dropped us at the start of the walk at about 3pm, where it was still pretty warm. We passed any number of people heading back down, and I realised that I'd never actually been up this route before (in fact I've only been over any of the summits in this range once each). We also had Finton the dog with us - a natural troublemaker with other dogs who had to be kept on a short lead for the whole walk 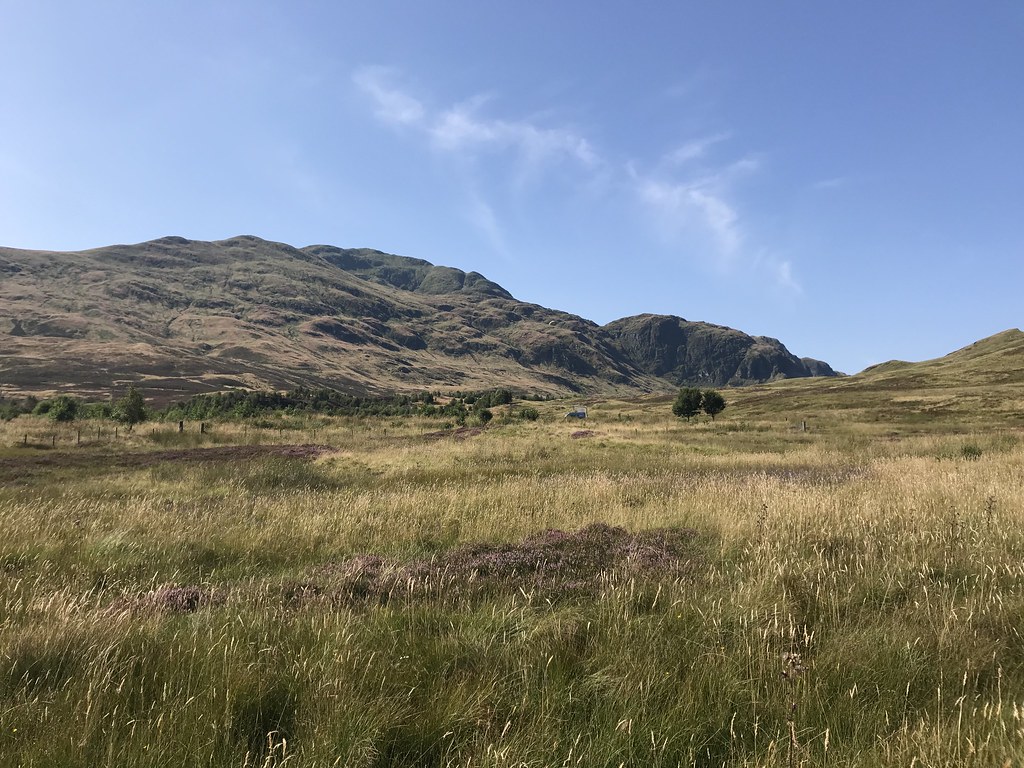 We made pretty good progress and decided to do Beinn Ghlas first. I barely remembered Beinn ghlas from my previous visit - just a bump in the ridge surely? But it is actually a very pleasant hill with a couple of well defined ridges and good view of Lawers from the top. 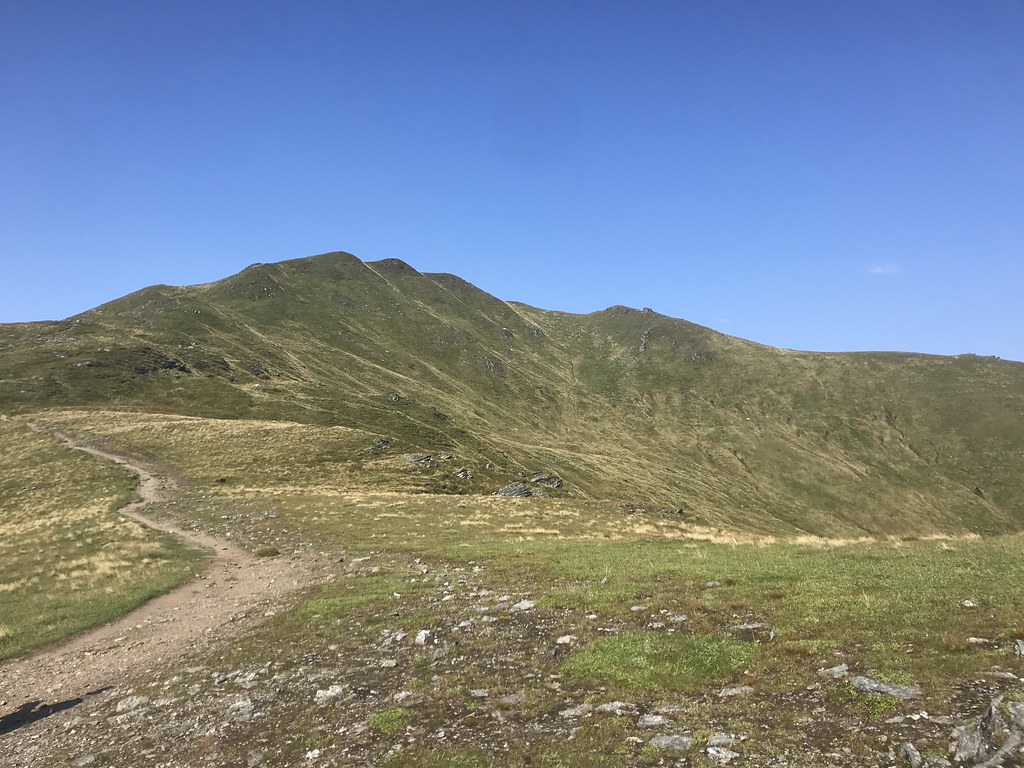 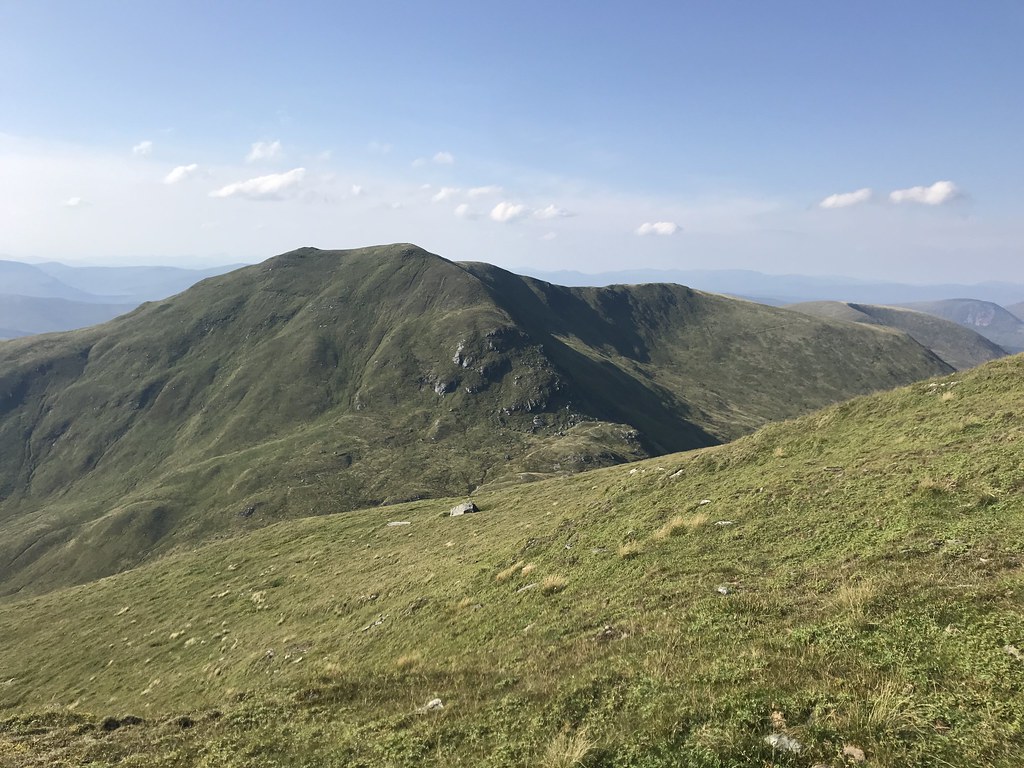 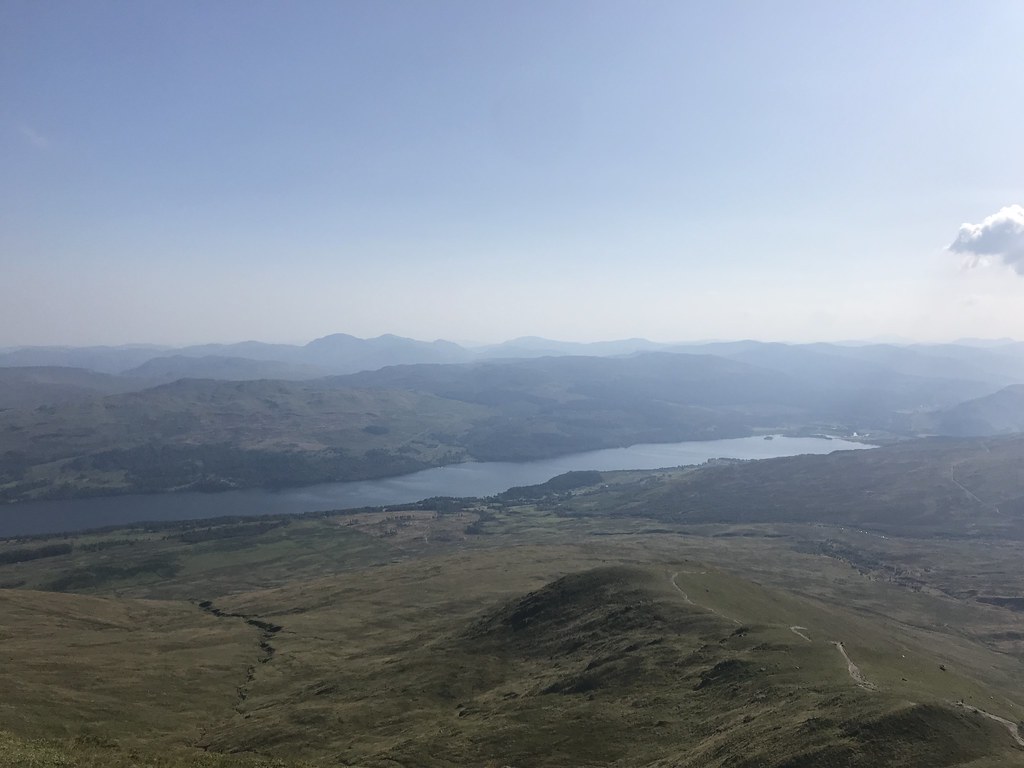 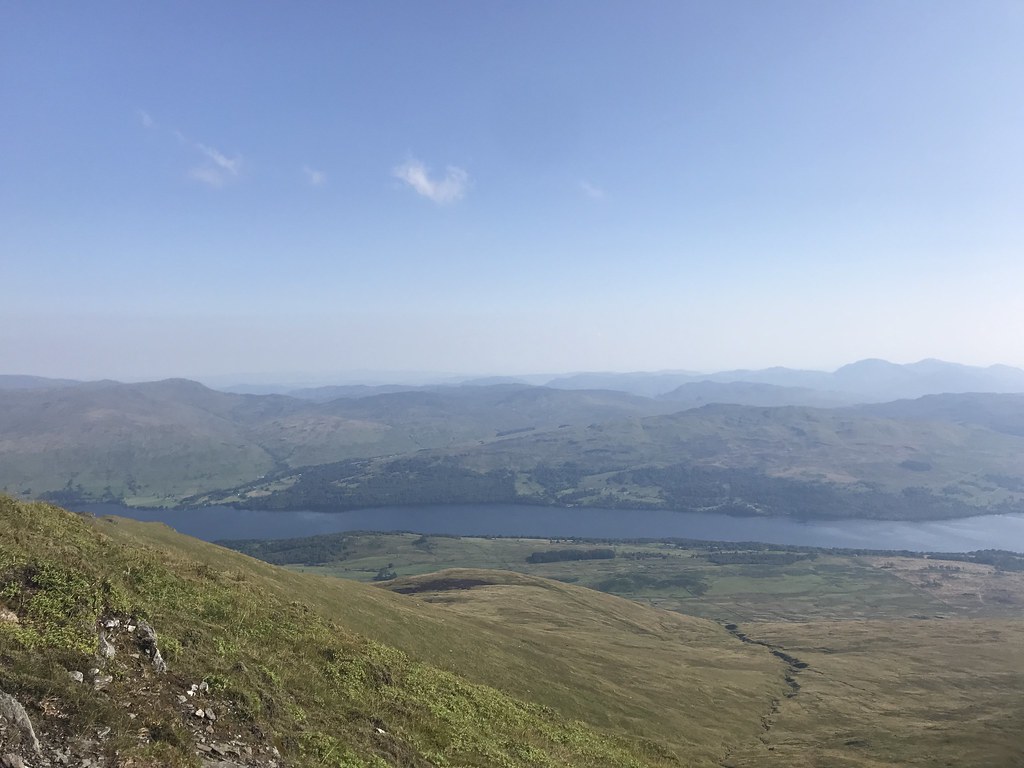 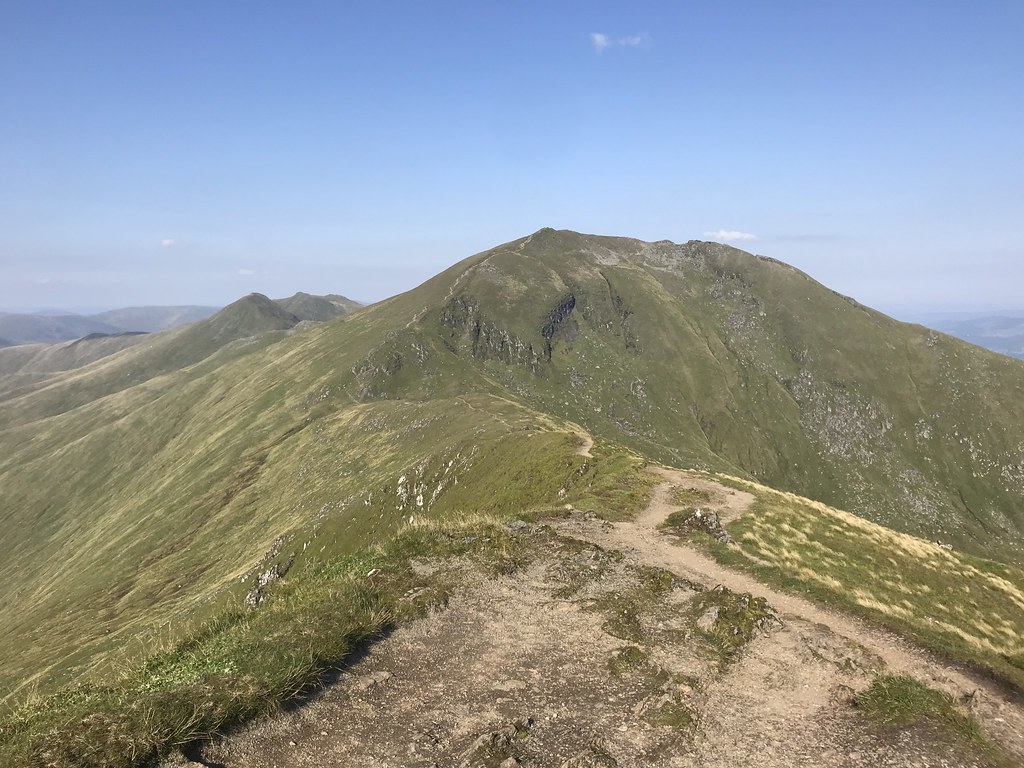 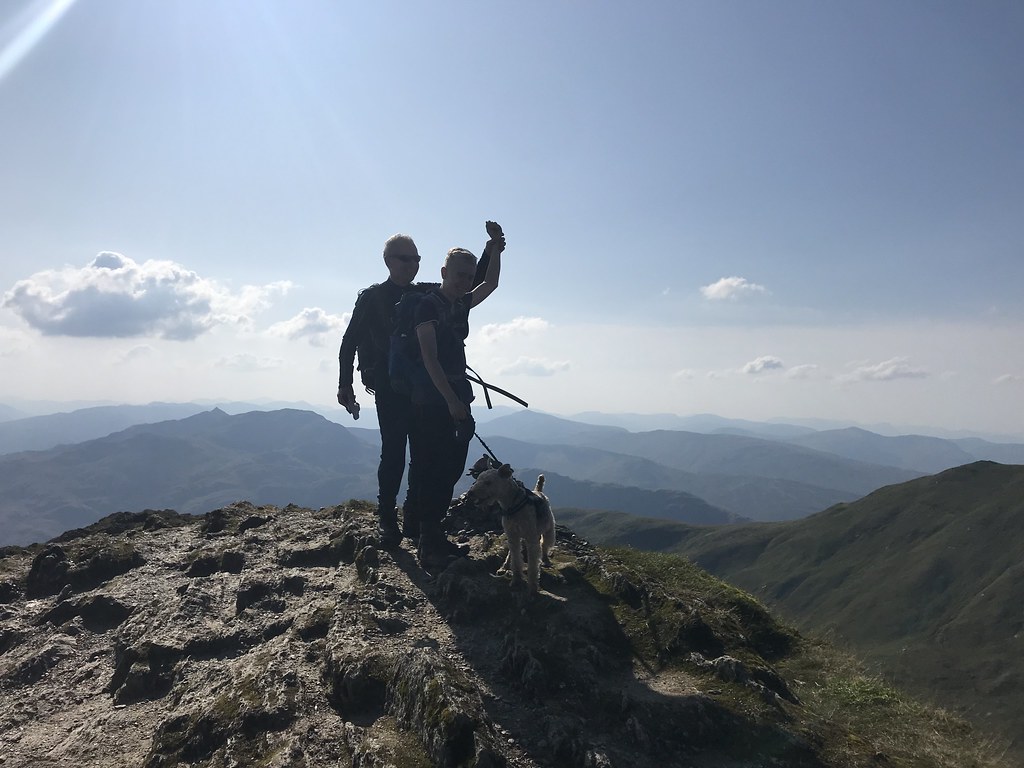 Nick and Thomas on Beinn Ghlas 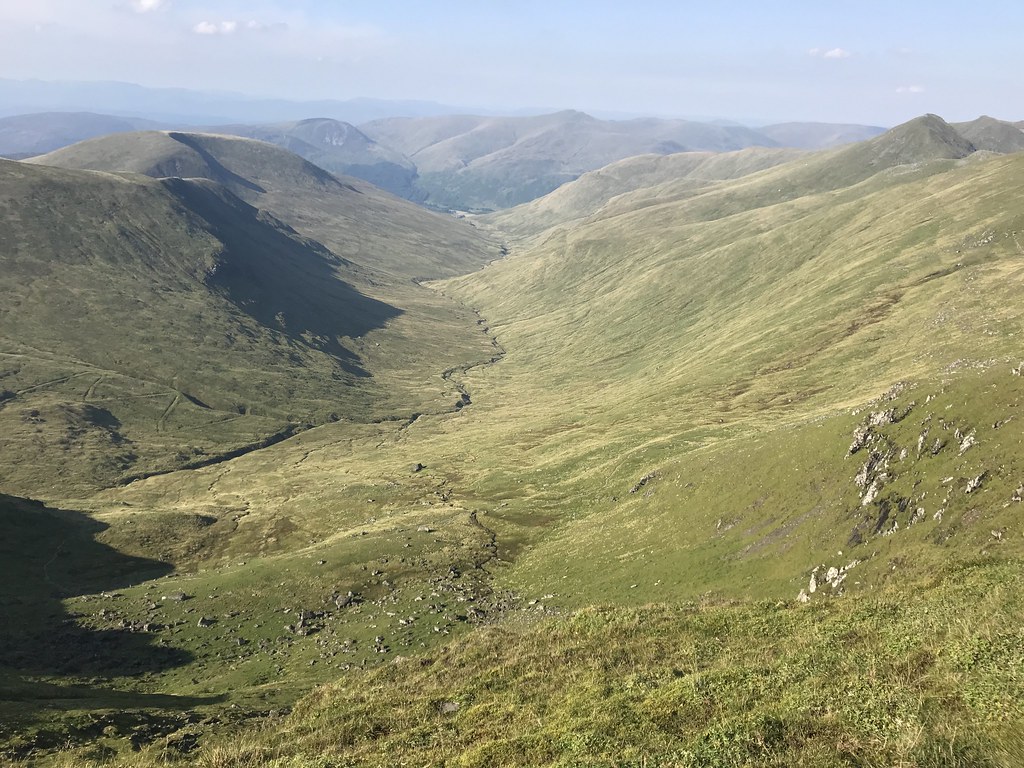 Looking towards the Cairn Mairg hills

An easy descent took us to the final ridge of Ben Lawers, which was much steeper. It was a bit breezy on top, the better to keep the midges away, but also enough to stop us from hanging around too long. Time was getting on, so we retraced our steps and took the contouring route around Beinn Ghlas this time. 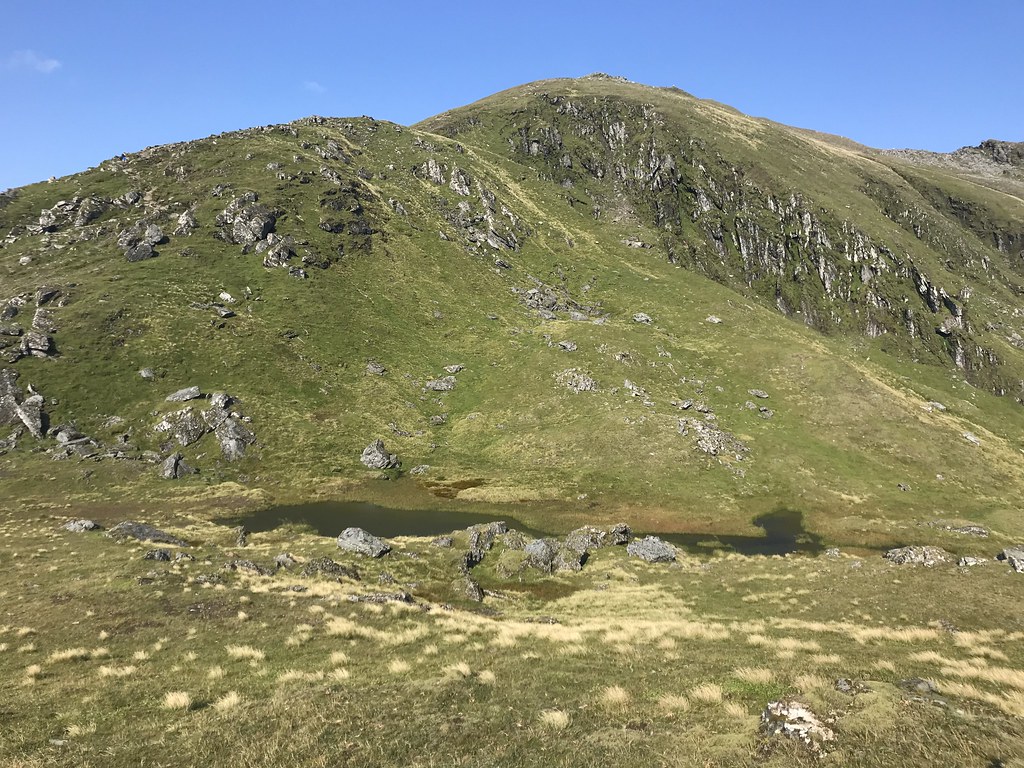 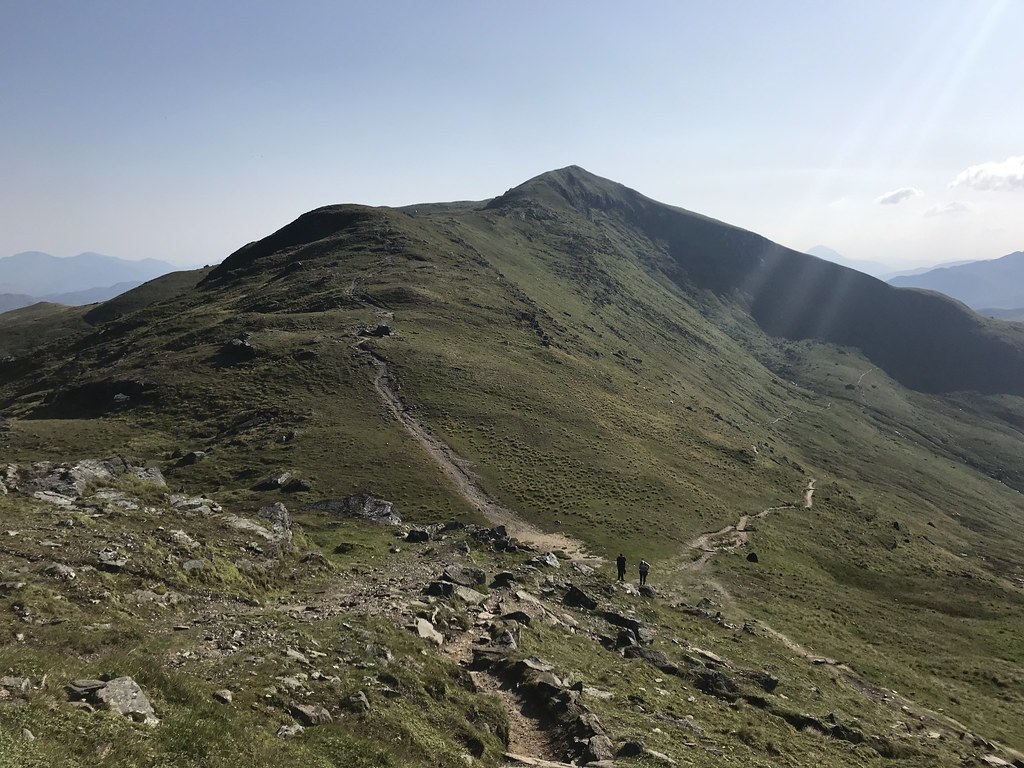 Looking back to Beinn Ghlas 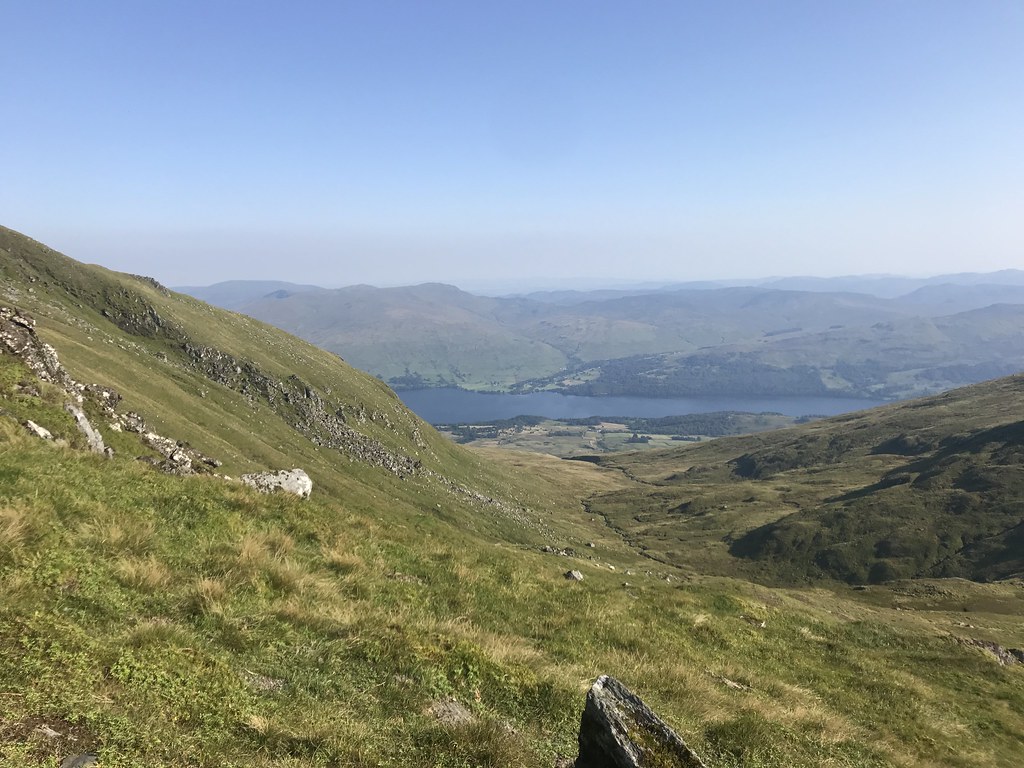 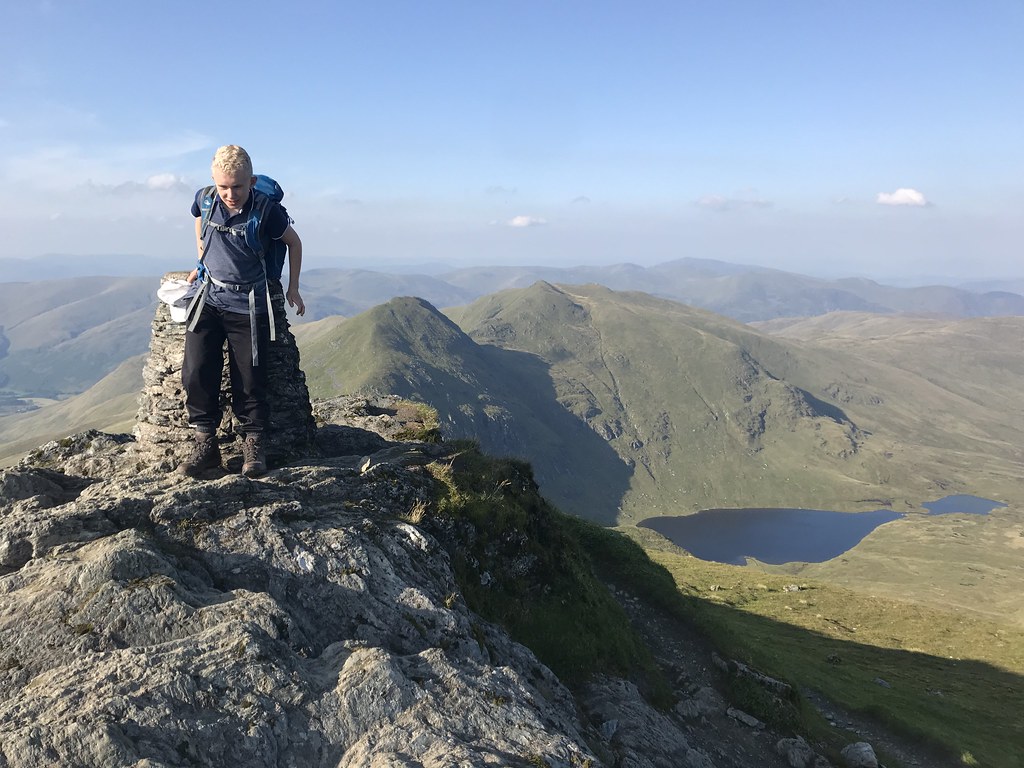 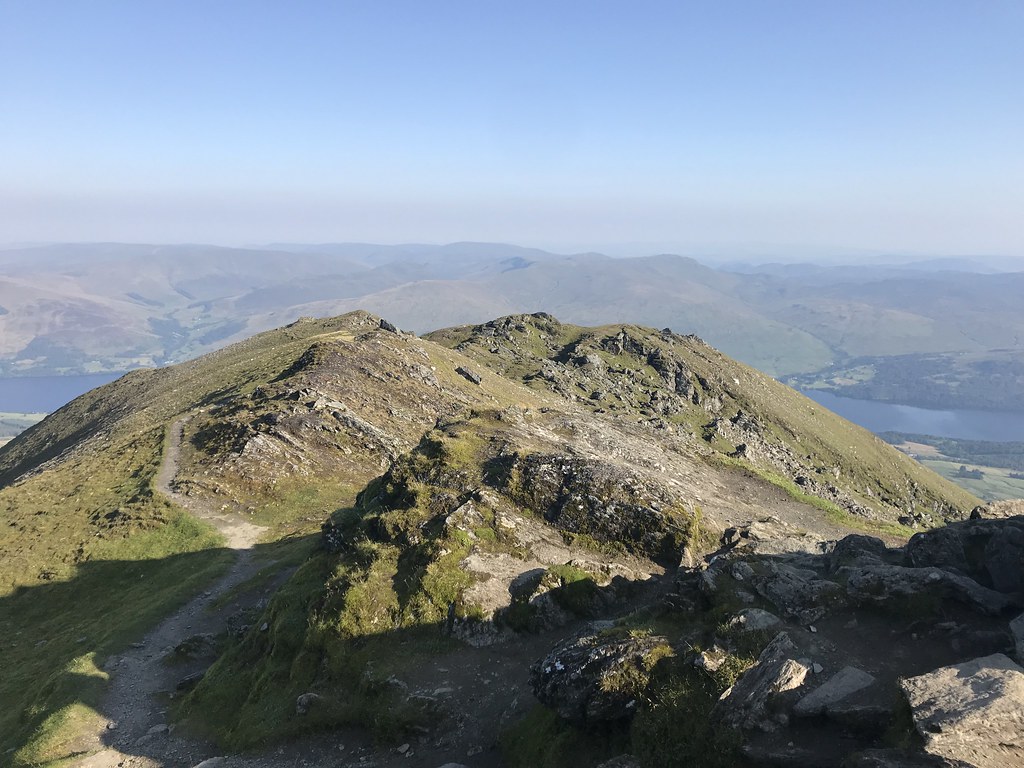 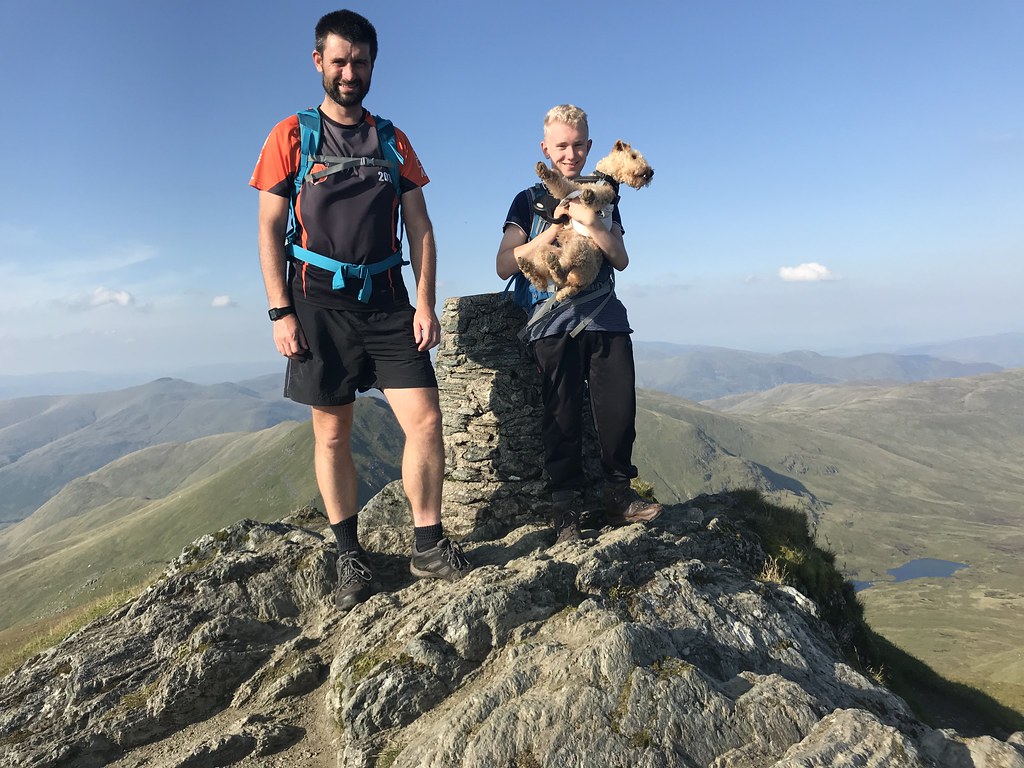 Me and Thomas on Ben Lawers 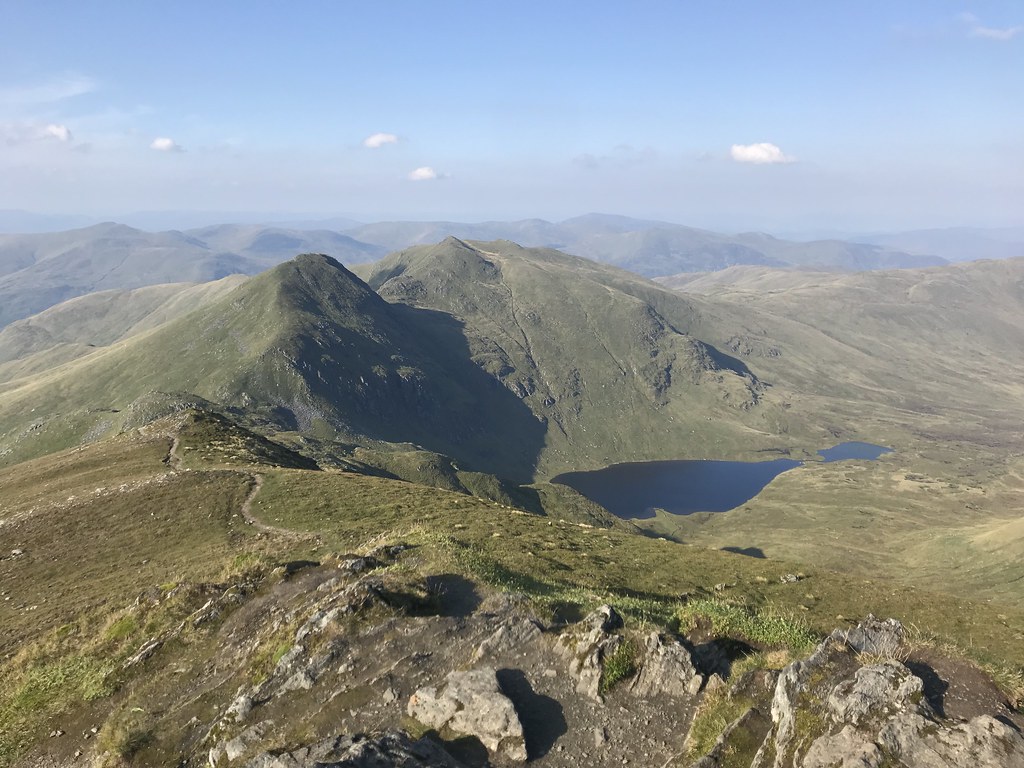 An Stuc and Lochan nan Cat 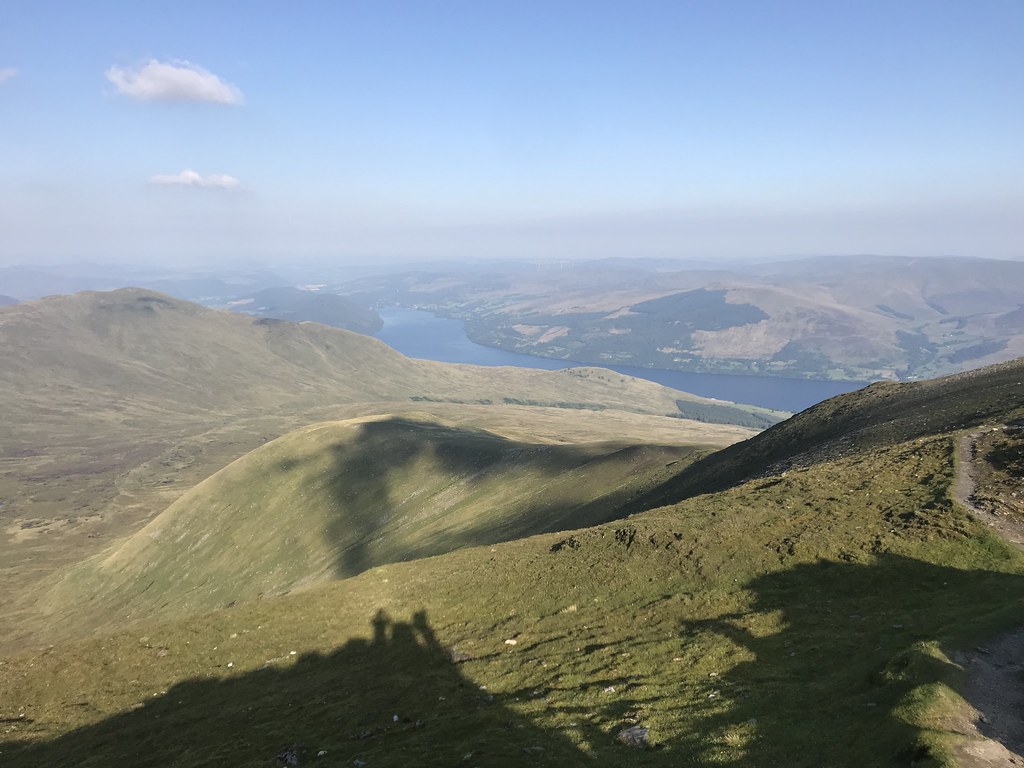 The descent was unsurprisingly much quieter, and we made pretty good time, only taking 10 minutes longer than my off-the-top-of my-head prediction of 4 hours. I love it when that happens! Thomas had done well to climb his first couple of Munros, although with regular visits to Wales, Yorkshire and the Lakes he was no stranger to the hills.

After a short amount of confusion as to our whereabouts, Pat picked us up and we headed back to the caravan for dinner. Unsurprisingly I had a couple of drinks and decided to stop for the night, which made for a fun Monday morning drive up to Inverness for work the next day!

Re: Catching up with old friends on Ben Lawers

Finton the dog? Reminds me of...FENTON