The finish is a long way from the start so we positioned a car at the finishing point before starting walking just before 10:00 in beautiful calm and sunny conditions. The track from the Cluanie Inn is a gentle but fairly lengthy stretch before the more serious climb up to the first Munro Creag a' Mhaim. This was a bit of a shock to the system for me, not having done any serious hill walking for some time, but my three companions took it in their stride. The views were brilliant, reminding me of what I had been missing all these years. There were several ptarmigan near the summit, an extra bonus to satisfy my birding interests. 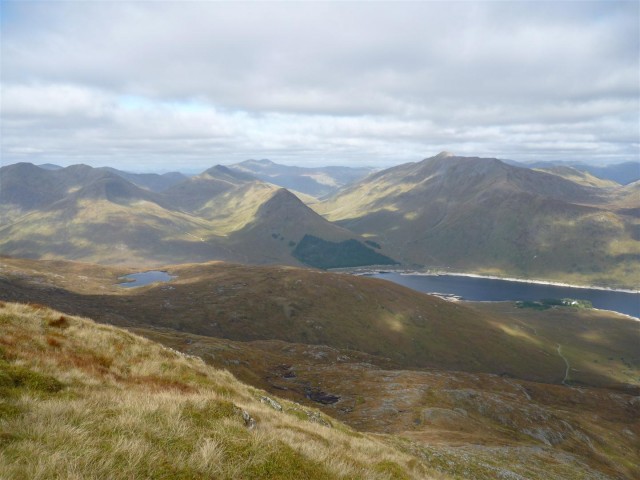 As we were leaving the summit a helicopter flew past some distance ahead of us and continued down into the valley to land near Cluanie Lodge. A relatively short stretch got us to the second Munro, Druim Shionnach where we paused for a little lunch. We could hear the bark of red deer in the valley and the eagle eyed member of our group spotted them far away, the distant specks resolving nicely with binoculars. The combination of sunshine and the shadows of travelling clouds produced changing patterns across the landscape. Aonach air Chrith, the third Munro, followed after a fairly lengthy trek and with the weather holding up we could see much of the rest of the ridge ahead. We were treated to more stunning views of the surrounding hills and lochs, particularly along Glen Quoich to Loch Quoich. The descent from this summit involved some fun scrambling followed by a grassy section to the fourth Munro, Maol Chinn-Dearg. The fifth Munro, Sgurr an Doire Leathain, required a slight detour to follow the ridge to the north east to reach the summit proper which we did minus rucksacks, a welcome short relief. From Sgurr an Doire Leathain

Returning to the main ridge we continued on to the sixth Munro, Sgurr an Lochain and then followed the path which bypassed the next peak of the ridge as this was not a Munro and the sun was getting rather low in the sky. The low sun, though, gave the views a lovely light. From Sgurr an Lochain

The ascent to the last Munro, Creag nan Damh, was a battle but we got there just as the sun was disappearing below the horizon. There was still enough light to start the way down and although most of the rest of the walk was in the dark it was helped by a bright moon. Yes, if we had started an hour or so earlier . . .

Good stuff, you got a decent day for it

It's a cracking walk

Well done & nice to see. I did this the month before you & really enjoyed it.

Good effort. Its a long walk but the views are very rewarding.

And so is the munro count

Looks rubbish. Gonna save these for a poor weather day

Certainly need a bit more daylight for it, but I'll log it in this summer, hopefully checking in at the Cluanie for a beverage or two at the end.