Culbokie Wyvis.gpx Open full screen  NB: Walkhighlands is not responsible for the accuracy of gpx files in users posts
The figures above don't include 40 kilometres cycling with 600 metres ascent.

I loved Nick Williams' Pocket Mountains series. It contained lots of imaginative alternative routes for over-familiar hills, even if some of them were totally barking. It also included routes like Evanton to Wyvis, which just seemed unattractive. However duties as a horse roadie found me in Culbokie. So early Sunday morning, off I went. There was no hill in sight after a day and night of downpour.

Crossing the Cromarty bridge, I saw an osprey, in hunting pattern over the firth. I didn't know that was the day's highpoint over already. The three miles on the A9 felt very vulnerable on a bike. After Evanton the first obstacle was a wallet in the middle of the road. It was soaking, clearly been out all night. I tried to get an answer at a nearby cottage then got hold of a guy working the fields on a quad bike. He was highly amused, yes it belonged to the cottage. I said I'd tried. "Och he was out till 3.15, he'll no be up till midday." I left him with it - I'm an incurable townie, I don't want neighbours that know that much about me.

I got on the forestry track. There was a junction I'd to find. It seemed long in coming. Finally I spotted some buildings. They'd help me pinpoint my position. Aye, they did, I'd passed them the other way 40 minutes before. I'd just circuited Cnoc a Mhargadaidh (obvious on my route map). I controlled the urge to chuck it and started round again. The junction was overgrown, though that was no excuse. The track was execrable. There was a burn swollen after the rains, with a couple of metres of swamp on each side. 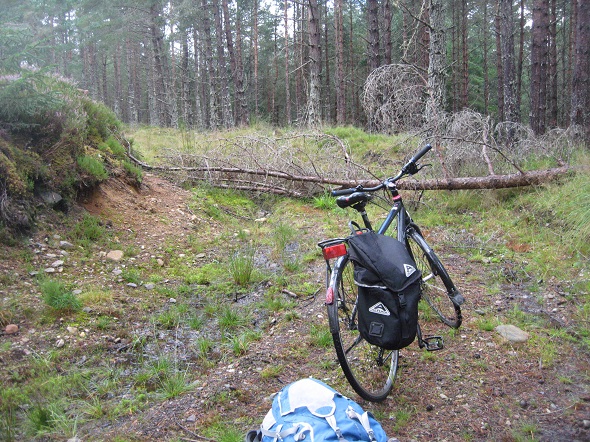 I climbed the stile to drop over, first my rucksack, then my bike pack, then the bike itself. I reached a superbly made track which looked like it went easily back to Evanton. It looked good for my return, meanwhile it took me another couple of kilometres till I abandoned my bike.

This is another charm of Nick Williams' books. If he thinks the length will discourage you, he seems to look for a way of hiding it. So he says "Walk times start from here." He then mentions the access time. His other trick is on a four Munro excursion, he will call two of them "detours" and not include them in the core time. Anyway, three hours after leaving Culbokie, my walk time started too.

I went down to the burn. His route requires you ford it on the way back. After the torrents of rain on the Saturday that had seemed unlikely to happen. One look confirmed this view to be accurate. There's a track up the burn, marked intermittently on the OS. It was solidly made but continually obscured by vegetation. I cursed it on the way up, blessed it on the way back. After a few kilometres there's a new run-of-river hydro with a major track network on the other bank. It's the sort of thing which should be controlled but honestly, who comes here?

After the track ended, there were a couple of kilometres of sodden, tussocky bogland. I wept salt tears. I got a view of the seldom see back corrie. I made the summit in just under three hours. I'd thought of continuing round the corrie but there was a burn to cross that might have been a problem and there would have been an extra kilometre of tussocks. I retraced my steps, meeting two lassies who were my only encounters from the wallet to back in Evanton. They got a summit view, I got this glimpse as I crossed the plateau. As I dropped I was looking to avoid some of the tussocks. Malky_C was scathing about peat hags on Meall na Speirig https://www.walkhighlands.co.uk/Forum/viewtopic.php?f=9&t=28083 and looking down I couldn't but agree. So I kind of countoured 50 metres above my outbound route. It was marginally easier but I twice went headlong, one time with my rucksack pinning my face in the heather. I could see the headlines "Pensioner suffocates in hills: said to be experienced." The track when I reached it was paradise.

Wyvis was finally clear when I reached the bike. The track via Fannyfield was a delight. I hardly touched my pedals all the way to Evanton. I survived the A9 again but the the steep climb to Culbokie nearly finished me. It had taken me 75 minutes to get back, compared to the outward 3 hours. The Culbokie Inn's handpump wasn't connected but there were bottles of Dark Isle ales at room temperature.

Re: Ben Wyvis from Culbokie - it's just wrong!

Used to work with Nick back in the day.
Always good to see interesting ways up popular hill, it does show off where the winter climbing is. (I've done it from Glen Glass on the bike which has it's merits).