Finally, a good brief weather window, after monitoring the forecasts for days and days; Jimmy had given up a few days prior on his planned Scotland trip for September. Saturday dawned bright and clear—a brief weather window opening from within one of the “wettest summers in decades.”

I wasn’t the only one to take advantage. I was in a queue of at least 10 cars going up Lomondside. I once again cursed the ageing eyes that have made driving in the dark so uncomfortable; only a few weeks ago, I’d have been away much earlier.

It’s a long way to the middle of nowhere between Loch Tummel and Aberfeldy, no matter which route you choose. Not that much longer timewise, to be fair, than going to the Lake District or to the Spittal of Glenshee, both of which have been visited in the past few weeks. But it seems much less efficient in that most of any of the options take place on smaller A and B roads. It was with some relief that I reached the start point, and found a wide space on the verge on which to park, nearly directly across the road from the mine track. I set off at 8:30. 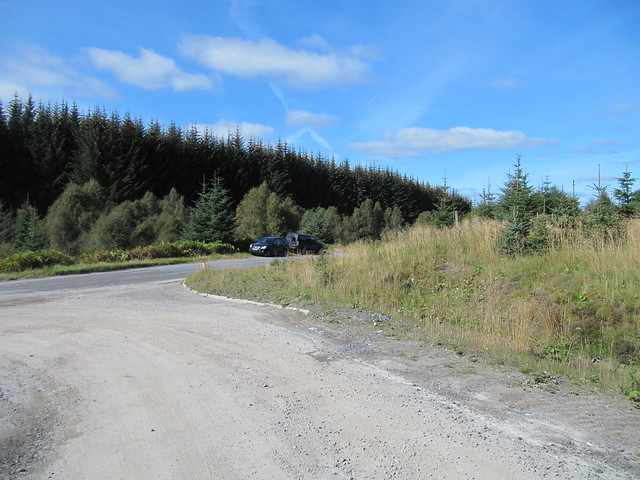 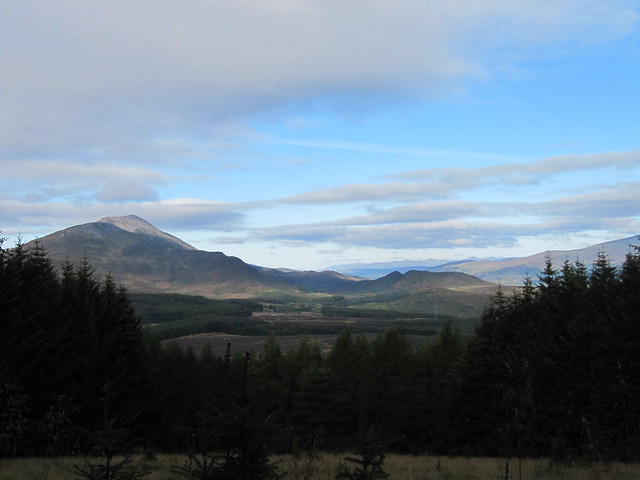 Schiehallion dominates; I'll bet it's heaving today! Glad to be away from the crowds...

It took me an hour to reach the summit of Meall Tairneachan. I tend to make good progress when walking on a track or a road, as that’s what I do most often, usually on a daily basis. (Especially since I’ve given up going into local fields since being chased by cows earlier this year! 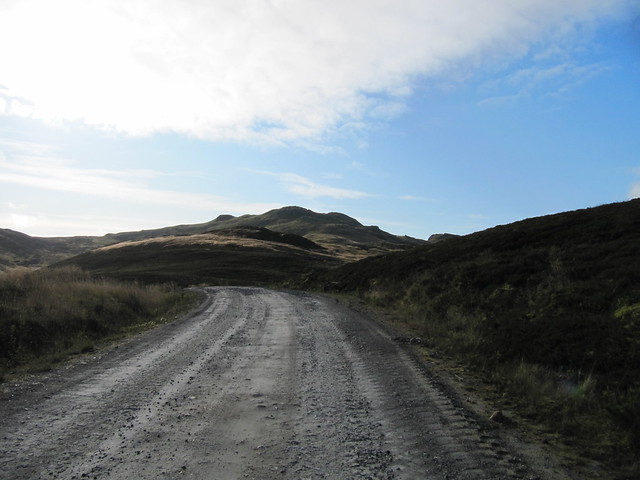 first view of my first target; just follow the track! 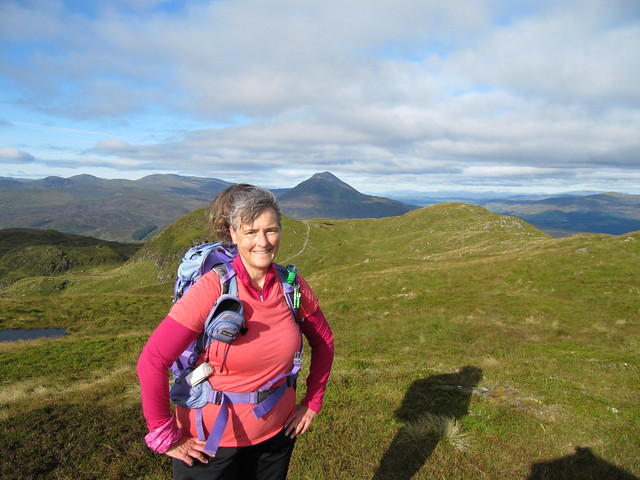 me and Schiehallion from the summit of Meall Tairneachan 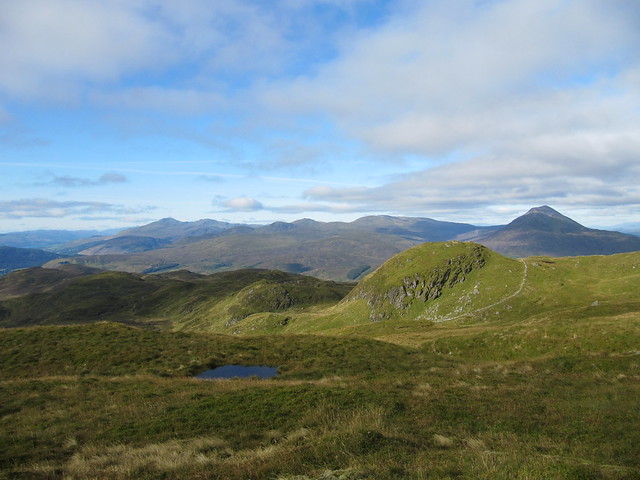 Schiehallion without me, but plus the Lawers range

The mine seemed very quiet as I approached it from above, and I even wondered if perhaps it had been shut down. It’s not until you get down into its bowels that you see the heavy equipment; in fact, I didn’t get a true appreciation of its scale until I was on the way out. 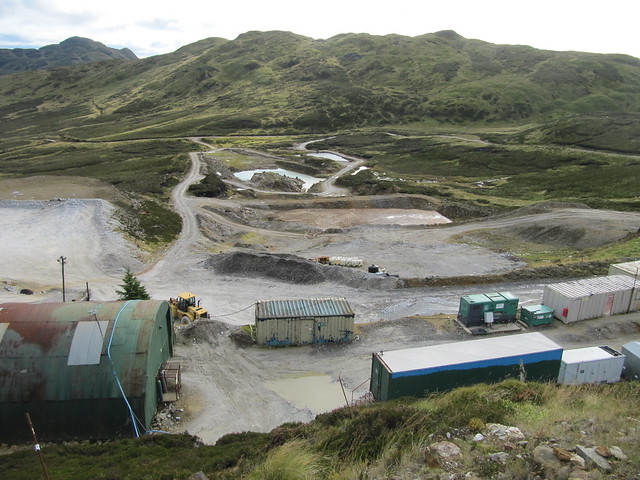 looking down into the mine; Farragon Hill in the upper left

The ground quickly became rough once I’d left the track. I missed the bit of the WH desc that said to contour the corrie on the south side, and simply headed toward my target. It wasn’t too boggy, esp considering all the rain we’ve had, but it was deep heather interspersed with holes; ankle twisting stuff. There were a couple of short but very steep sections, and then voila, I was at the summit of Farragon Hill. 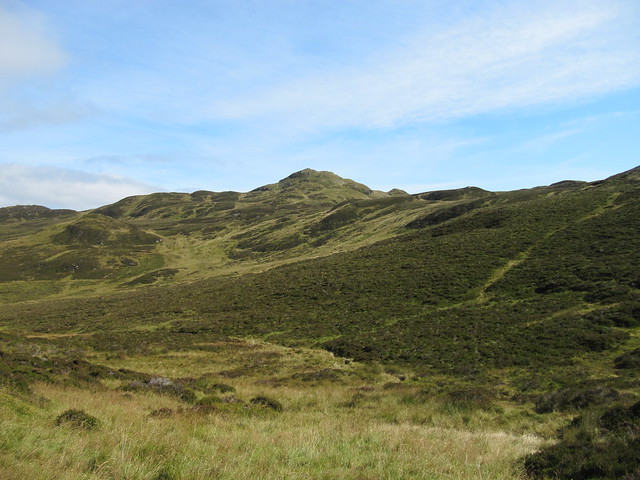 just take the direct route; you can see where you're going! 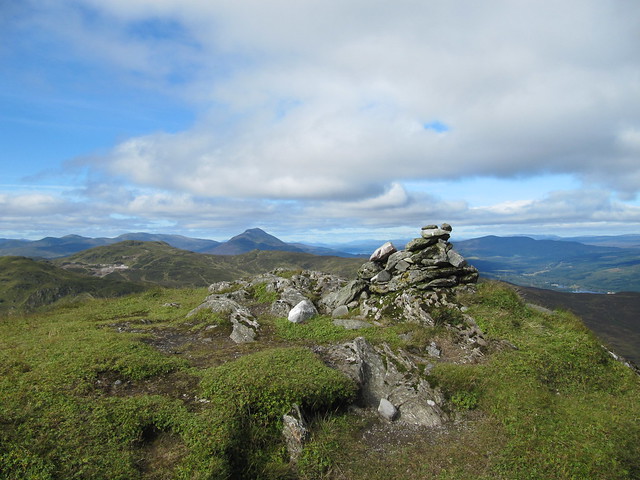 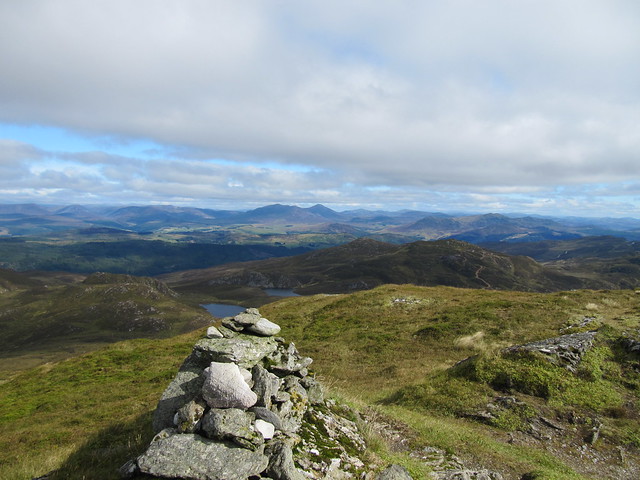 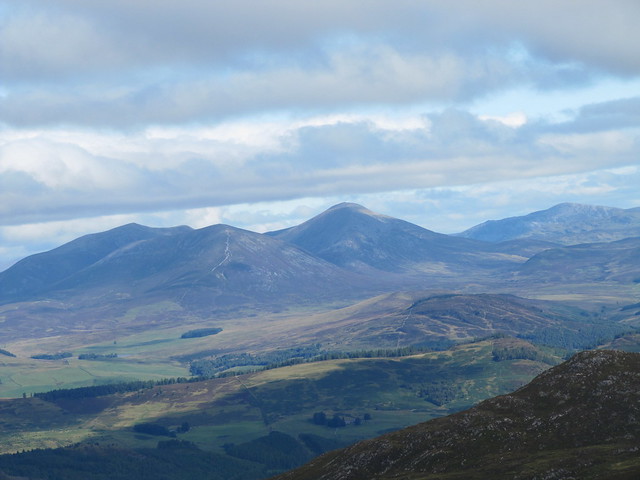 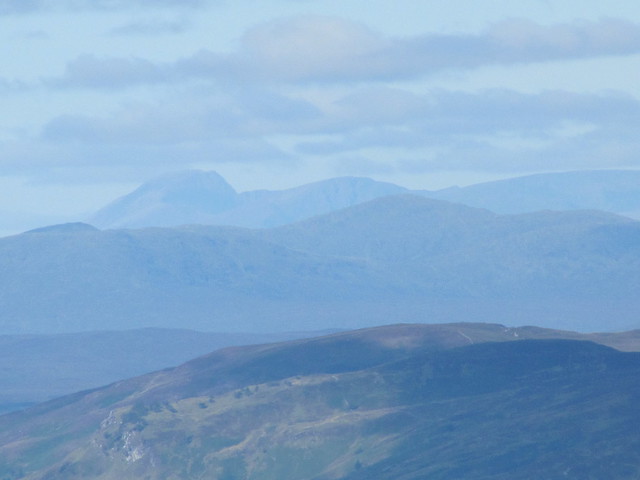 It was quite cold, so after taking a few photos, I found a bit of shelter from the wind just below the summit, and settled in for 10 or 15 minutes to enjoy the view and have a bite to eat before making my way back across the rough ground to the mine. On the outward route, I did follow the WH route, but didn’t find it to be any less rough or boggy; there certainly wasn’t a path. But the visibility was good, as it had been all day, and I could clearly see the track I was heading for. I wasn’t looking forward to all the ascent required to first reach the mine, then climb up out of it, but it wasn’t as bad as I thought. From there, it was pretty much downhill all the way back to the car, which I reached at 2:00pm.

About three minutes after arriving, I was joined by another woman who’d also been walking on her own, and we got to chatting; I still don’t know how I never saw her, as I’d scanned the hills several times for other walkers (although she said she’d seen me). She was from Bishopton; we’re more or less neighbours. We discussed hills (she and her hubby are on their third Munro round!), the walk we’d just had, and the best way home. We both decided that the Lochearnhead/Strathyre/Callander route was likely to be better than Crianlarich and the inevitable wall of traffic at the bottom of Loch Lomond that a nice Saturday creates. Even thus, it still took me nearly three hours to get home.

But I’d had a great day—cool and breezy enough to keep the wee beasties at bay, spots of very welcome sunshine, and a lovely walk to boot.