Cairngorm 4000s and others over 2 days

Cairngorm 4000s and others over 2 days


After 2 years of waiting and wanting, an almost perfect weekend of weather appeared in August 2019 in Aviemore - perfect for my first overnight expedition in Scotland - the Cairngorm 4000s. Having walked in the Cairngorms for many years, almost all the Munros on the Aviemore side were ticked off - just a few to go. So, as well as a 4000s trek, this would also be a Greatest Hits tour of some of my favourite hills - I won't be back to the area in Summer for a couple of years.

Leaving the car at the Sugarbowl car park, a quick ascent up the Allt Mor, scrambling round the still damaged boardwalk, up to Cairn Gorm car park. 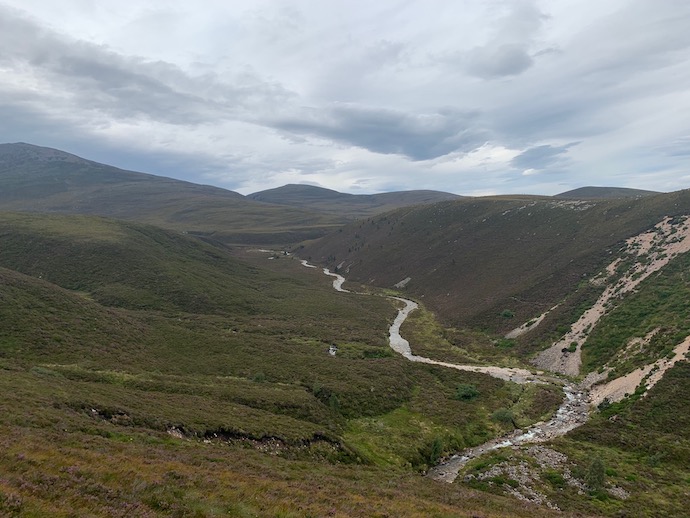 Leaving the car park behind, I began the ascent up Windy Ridge, which certainly lived up to its name. Shorts and t-shirt at the bottom, full waterproofs at the Ptarmigan Top Station! A push on and the first summit of the weekend was reach - Cairn Gorm done! 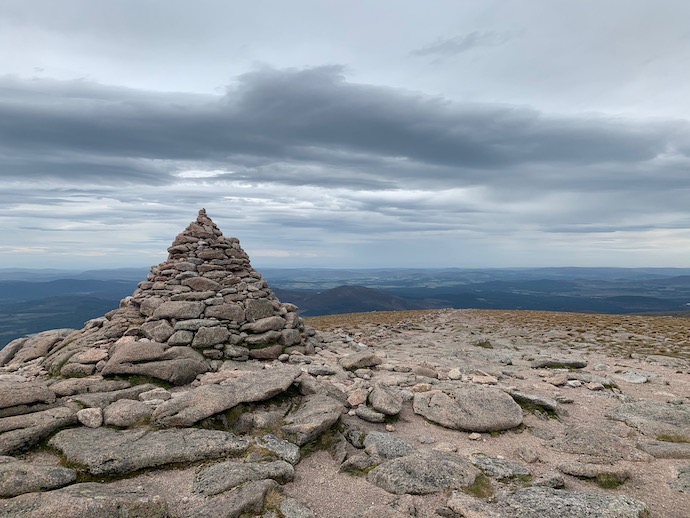 A quick stop at the stop for obligatory photos (especially to mark my 25th ascent of this mountain), and then on to one of my favourite spots in the Cairngorms - Loch A'an. The wind relented, and I was able to grab a bit of lunch path side, suddenly joined by a couple of reindeer no more than 20 metres away. 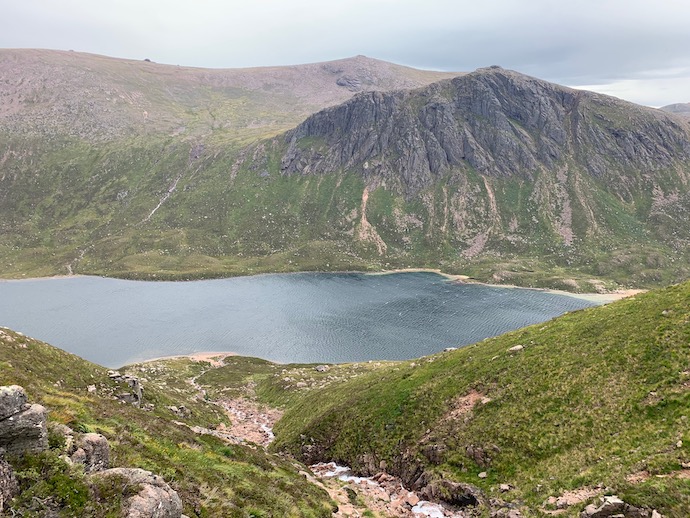 Down Coire Raibert to Loch A'an

Waterproofs removed, the descent down Allt Coire Raibert passed quickly, as did the ramble round the head of Loch A'an. Climbing up the other side, I always love the views! 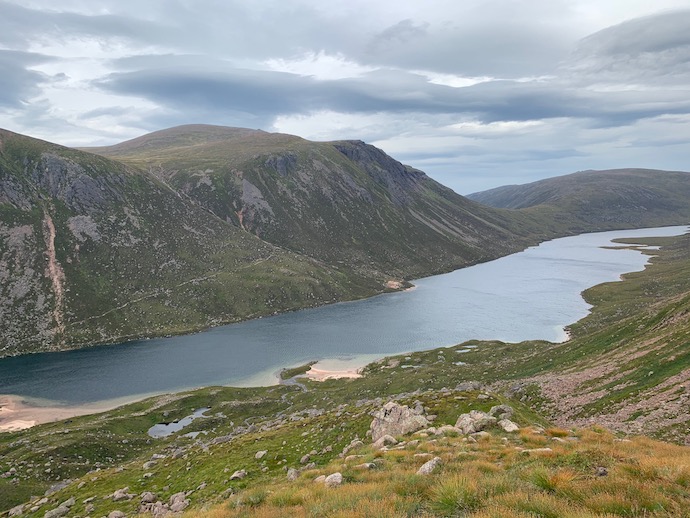 Instead of continuing round to the track up on to Ben Mheadhoin, I took the more direct route up the shoulder, which proved a very successful idea - on the plateau in no time! The wind was strong behind, which helped on the journey over the top to the summit tor. For the first time I climbed up the largest barn, and had a great conversation with a lady who had arrived from London on the Caledonian Sleeper that morning, and was now walking her parents dog, Mist! 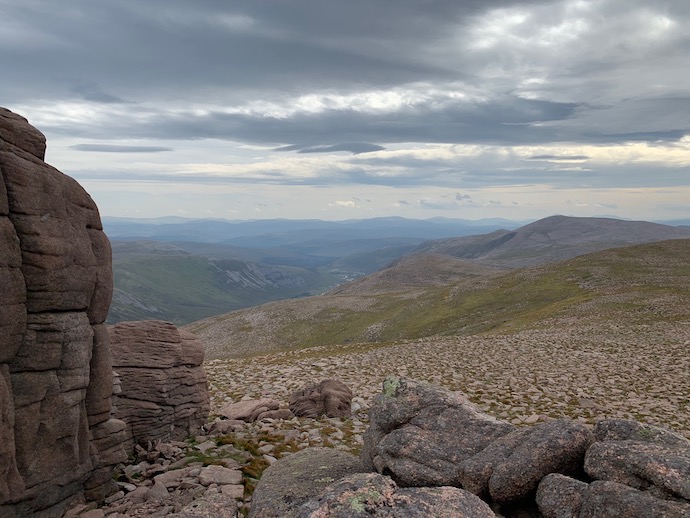 Another brief stop, and then a fairly speedy descent to Little Loch Etchachan, even if the wind was now in front of me! A tactical water stop to help get me through the rest of the day, and it was onwards and upwards to Derry Cairngorm. I first did Derry CG in Summer 2018, and loved it for its views back in to the Cairngorms. And this time it delivered again - but with extra views across to Braemar and Lochnagar. Unfortunately, it was here I realised I was not going to have enough time to add in Carn a Mhaim as planned - alas, another dat. Back to the track and a final 40 minute push brought me to Ben Macdui, the fourth and final summit of the day. By now it was 5.30pm, and not another soul was on the summit - the first time for me on Macdui. After a last check in with the parents to let them know I was okay, I headed to the big unknown of the weekend - the descent from Macdui in to the Lairig Ghru, via Coire Clach nan Taillear. Thankfully, with the help of a small track and a bit of follow-the-nose, I made the descent in to the Lairig, taking in the views up to The Devils Point and Cairn Toul - tomorrows job.

Landing in the Lairig, and back on to a solid, mostly flat track, it was an easy final approach to Corrour Bothy, my home for the night. Arriving in to the Bothy, I began to get concerned - there was an awful lot of midge hoods about... and I didn't have one! Thankfully, after an interesting experience getting changed and having dinner surrounded by midges, I was able to bag a space in the Bothy and settled in for an evening of songs, stories and a good bit of banter with my fellow Bothiers. Day 1 complete!


4000s Day 1 - Cairngorm to Corrour Bothy.gpx Open full screen  NB: Walkhighlands is not responsible for the accuracy of gpx files in users posts

After a very uncomfortable sleep (note to self - bring a sleeping mat!) I got my kit together and set off shortly after sunrise (around 6.30am), getting the initial climb out of the way for a stunning breakfast view on top of The Devil's Point. The skies were clear and the sun shining! Leaving Devil's Point (although I could have sat for hours), so began the ascent of Stob Coire an t-Saighdeir, the first Munro Top of the day. Climbing over and around the boulders and slaps of rock was great fun, and seeing the view to the rest of the days Munros from the summit just stunning. Views towards Cairn Toul and Braeriach

Not stopping for long, I headed round the Coire and up to a mountain I have wanted to climb for years - Cairn Toul. The double cairns, the views, and the perfect point for Jelly Babies, all rolled in to one mountain. Here I met a couple who were also doing the 4000s, but had sensibly wild camped just below The Devils Point, avoiding midges! From here, I could also see more of the A9 Munros, and indeed Beinn a Ghlo, which I had walked earlier in the week. A quick down and up from Cairn Toul and I was on the penultimate summit of the day - Sgor an Lochain Uaine (Angels Peak). Leaving Angels Peak, so began the longer final climb, first up to Carn Na Criche (second Munro Top) and then on to Braeriach, with a little stop at the Wells of Dee for a much needed water refill. Always a tough mountain to summit, Braeriach once again proved itself to be a perfect summit - the views, the views and the views! That was it - the 5 4000s, 8 Munros total climbed. Just the matter of the 2.5 hour descent back to the car. But first, lunch! I planned to stop for 20 minutes, but soon I was joined by the couple I met on Cairn Toul and, along with another 2 gents, we had a great chat about all things Scotland. An hour later, it was time to descend - that's the longest I've spent on a summit, and would have stayed there for the rest of the day. The Lairig Ghru from Braeriach

The descent was good going, passing a lot of people climbing up (I've never seen so many people on this hill!). The mouth of the Lairig was a welcome sight, providing a little flat section of path before the climb back up to the Chalamain Gap - another personal favourite. Entrance to the Chalamain Gap

The scramble through the Gap is never the same twice, but always great fun. Soon enough, I was out the other side, and followed the path round the Reindeer Huts, taking in a final epic view of the Cairn Gorm horseshoe. 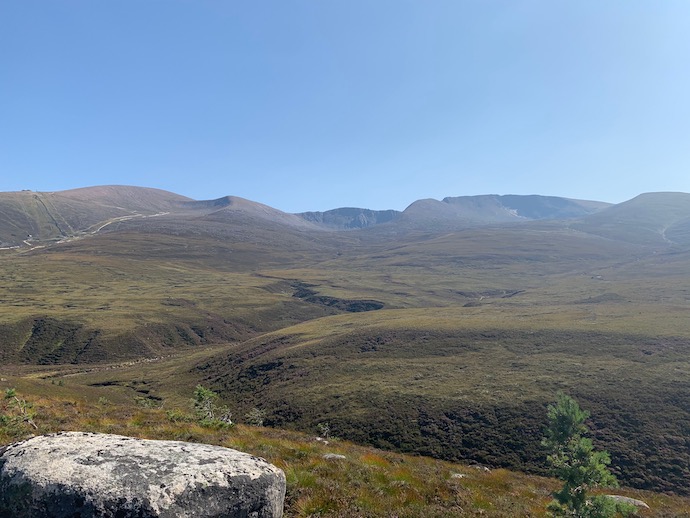 Crossing the bridge, I took the climb out of the Allt Mor, and returned to the car. An incredible weekend, goals achieved, and a great way to sign off the Aviemore Cairngorms. What was extra special was the freshly made burger I picked up from The Druie at Rothiemurchus on the way home - a perfect end. Back over the Allt Mor


4000s Day 2 - Corrour Bothy to Braeriach.gpx Open full screen  NB: Walkhighlands is not responsible for the accuracy of gpx files in users posts