A later than planned start led to a slower than desired rush hour crawl towards the Edinburgh bypass and then round it and onto the A7. From there it was an untroubled drive through Hawick then south along the B3799 to the single-track road past Hermitage Castle to park at the start of the track to Twislehope.

That meant a 11am start to my walk which, according to the Met Office, should remain dry for another two hours - perhaps. So I made sure I had waterproofs with me. Having read inca's report I was greeted at Twislehope by the expected pack of hounds - thankfully safely penned behind bars. Possibly intimidated by them I mistakenly headed to their right along the main track between the farm buildings to be met by the farmer who set me on the right (ie left) track. Evidently quite a few walkers make the same mistake. Not surprising when the 1:25,000 map doesn't really have the detail. I therefore experienced another vociferous yapping on my way past the kennels to the footbridge over the stream. From there it was just a case of following the track. One easy ford by some sheepfolds was followed 0.6km later by another to bypass a very decrepit footbridge as the gradient steepened. Not a recommended crossing

In a little over an hour I was at the top of Hartsgarth Fell where the map shows the track ending. 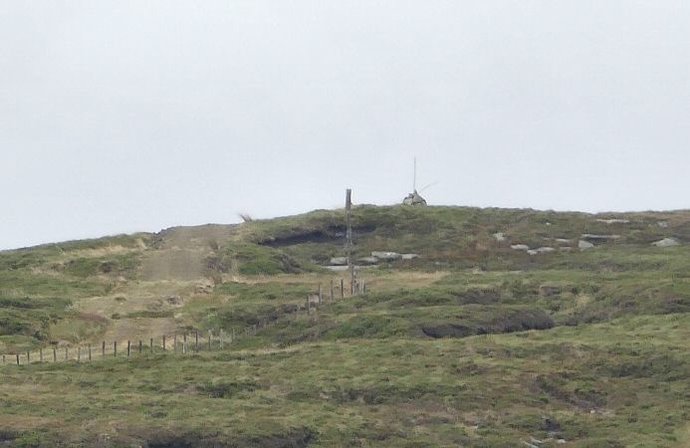 The track from Hartsgarth Fell to Roan Fell

It doesn't, but continues along to pass within a few metres of Roan Fell's summit cairn on the other side of the fence. So far it had been dry with 100% cloud cover and only a very few drops of rain. As I turned to head down, a few seconds of sun appeared raising hopes that more would follow. Approached the col between Hartsgarth and Din Fells I was vaguely considering heading over the top of the latter when it started to lash with rain. I continued downwards instead, only to find that within ten minutes the rain had stopped and not much later the sun reappeared. So I suffered another ear-splitting greeting as I walked past the farm. When I'd chatted to the farmer I'd asked if there might have been any shooting since the map showed grouse butts. He told me that there was none now, and he'd be surprised I saw any grouse at all - and I didn't. It seems all shooting had stopped thanks to the RSPB with priority now being given to hen harriers. The interior of Hermitage Castle

Afterwards with the sun now shining brightly I stopped at Hermitage Castle where I was relieved of £4.80 by Historic Scotland to wander around outside and inside the ruins. I didn't buy any of the books on offer there, but I did make use of the toilet.