Our first attempt at "bagging" 4.

Our first attempt at "bagging" 4.


Now I must admit when I when I started this hillwalking thing a couple of years ago, I was well chuffed with myself when, at my advancing age, I was able to bag the odd Munro. Not too bad old guy

.I picked off a few of the well known southern singletons. The thought of doing more than one barely entered my head. That's just crazy and beyond me. But then the following year (last year), the attraction of bagging two in the one day made me give it a try and my first double was An Caisteal and Beinn a'Chroin. It was a great day and I realised that if the circumstances were right I could manage a little more than the easier singles.
Forward to this year, and after a treble in the Lawers range with my grandson Matthew, we decided to see if we could try for a "4" and, as we are pretty much limited to our trips being on a single day, the Carn Mairg circuit in Glen Lyon most fitted the bill.
We set off around 7am and arrived at Invervar at 8.45am and were ready to go by 9am.

There was still a chill in the air, but at the lower level once we got walking we soon warmed up. But once some height was gained, after leaving the wooded area which we had hugged on our left, the breeze meant another layer had to be added.

Nearing the summit of Carn Gorm, Matthew got a little ahead of me as I struggled for breath and had to take a few breathers. And to be honest, at that moment, the thought that there were FOUR summits ahead of me, filled me with some trepidation. I comforted myself that with the thought that gaining the first summit had the greatest amount of continual ascent of the day, and hopefully I would get my second wind once that had been achieved. Three young lads from Dundee who had arrived just as we were just about to leave the car park caught and over took me and ended up summiting Carn Gorm at the same time as Matthew, a few minutes before me. Late morning, it was now a nice day, although still retaining a chill.

There was a tremendous 360 degree view with the rocky side of Stob Dearg of the Buachaille being particularly impressive. And, as often, Ben Nevis with a small patch of cloud on it's summit, in the distance, hovering over the west shore of Loch Rannoch.

One down, three to go.
We all left Carn Gorm together, before two of the Dundee lads shot ahead, Matthew was some 30 metres ahead of me and the other lad as we chatted about our (limited) experiences. Eventually he ran on to catch his mates and Matthew and I were together again as we headed for Meall Garbh. Thankfully I was now feeling better, and the summit of MG was reached without too much hardship.

Me on Meall Garbh summit.

Two down and two to go. I took a picture of the first summit we had visited.

Looking back at Carn Gorm.

From this summit, from an angle we had not experienced before, there was an impressive view of Schiehallion.

Matthew and Schiehallion from Meall Garbh.


It was now on to the longest stretch of the circuit as we headed for the highest summit Carn Mairg.

Along the way something caught my eye on the path. A very short fat slug, unicorn poo? no

Both the chill and the breeze had all but disappeared now and it had become a very pleasant day to walk.The rocky flank of Carn Mairg made for an easy target to head for. The summit was reached and here we met the three Dundee lads again sat around the cairn. I walked up to them, swapped greetings and said "three down, one to go", which was met with puzzled looks. "Is this not the final one?". A moment of doubt about my own thoughts of where we were swept over me, but then, sure of my facts, I got out my map and showed them where we were and pointed to Creag Mhor as the final Munro summit. A lady and young girl sitting on the other side of the cairn and were doing the circuit in the opposite direction confirmed the Creag Mhor summit. A quick check on his mobile phone which had the walk downloaded on Viewranger, confirmed he had slightly misread the info and the three lads happily set of to bag No.4.

Provisions were taken then we went to explore the rocky ground beside the summit. Here we met a gent who was walking with his West Highland Terrier. We left the summit together and as the gent circled around the east of the summit, Matthew insisted we take "the shortcut" down through the crags of the south face. Needless to say the man and his dog ended up 5-10 mins ahead of us on the track to Creag Mhor.

After descending through the crags of Carn Mairg.

), when we finally reached Creag Mhor, summit No.4. It was Matthew's 25th Munro, a number he said he would be happy to end the year on, although he hoped we could still maybe squeeze another couple of walks in yet.

Celebrating No.25 on Creag Mhor. Saltire pic No.1

Celebrating No.25 on Creag Mhor. Saltire pic No.2

Me, summit of Creag Mhor No1

Me summit of Creag Mhor No.2

Some more eating and drinking, some pics and then we began the descent.

Matthew with most of the walk behind him. 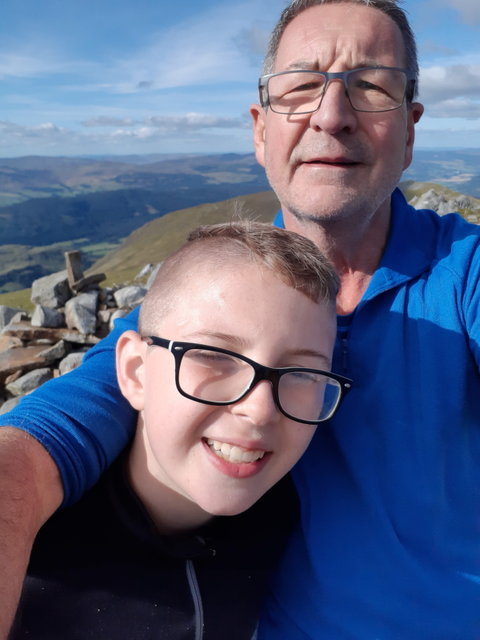 I have mentioned this before, but Matthew has a walking anomaly that requires him to wear splints on his legs during the day (while at school etc) and he find the long descents the hardest on his legs and, added to him tiring a little, our descent was pretty slow. But we were in no rush.

Carn Gorm (middle) from the descent.

Carn Mairg from the descent.

We arrived back in the car park around 5.30pm. Four summits, all in the clear and with views. What more could you ask for?

Brilliant. Looks as if Matthew has (sort of) decided he should stay near grandad. It is surprising how you get a second wind after the first hill, as long as you don't try to race. I did a circuit of these with someone who had decided to test the theory that if he could force a litre of water down him at the beginning, he wouldn't have to carry it. A blisteringly hot day lead to frequent requests for my bottle and us both ending up parched.

Lovely report, and some great photos

Nice way to end your year, but there will still be plenty of good days to come, so you can surely squeeze a few more in

You can both be rightly proud of yourselves. Great achievement.
I don't remember an awful lot about those four, due to clag from the first summit onwards, but I do remember that last one being a bit of an anti climax, and it would be easy to miss it altogether. Nice to see the views I didn't get.

Great report and photos John. Well done to Matthew too, it's great to get the kids out and about. It's something too many kids don't get to experience.
I'm taking 3 kids plus 1 dog on this circuit tomorrow, the kids biggest round yet, they've only done doubles so far. Unfortunately my bag gets heavier as i go round as things gradually migrate from their bags into mine. Good exercise I suppose. Thanks again for the report.
Stay safe