Hey there Mr Blue, we're so pleased to be with you!

Hey there Mr Blue, we're so pleased to be with you!

BeinDearg6.gpx Open full screen  NB: Walkhighlands is not responsible for the accuracy of gpx files in users posts
After a much better sleep and a couple of beers - and no 12 hour drive compared with the walk the day before... I was raring to go today!

I was staying at the Forest Way Bunkhouse just south of Ullapool, so it made getting to the start very easy - just a five minute drive!

The sun was up nice and early and it was promising to be a wonderful day. Who says bank holiday weekends are rubbish?? I parked in the big walkers car park at Inverlael and by 7am, there were already six cars parked up. No doubt these hills were going to be busy today with lots of people enjoying the weather. 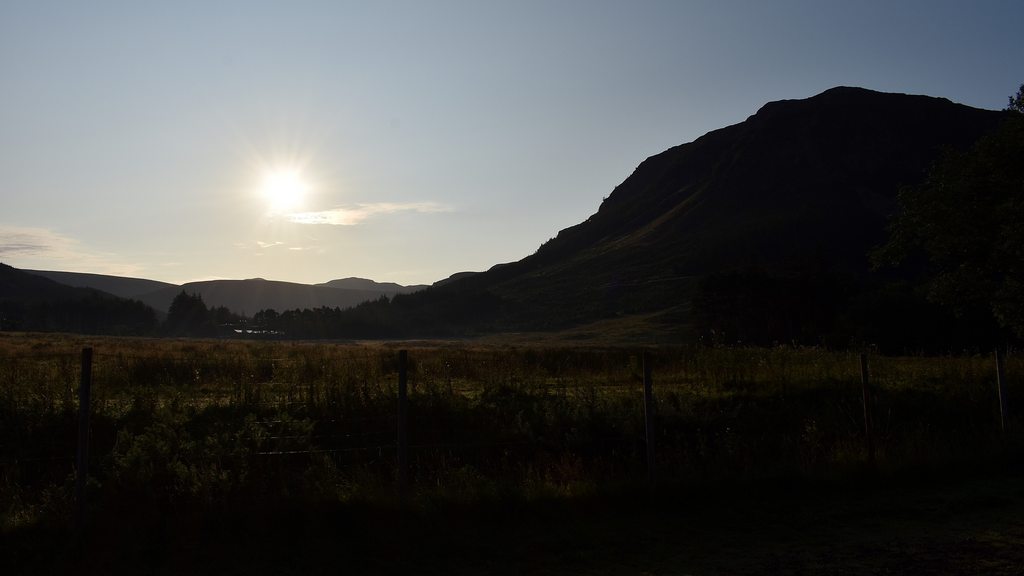 it's going to be a good day

There was no breeze at all down here at sea level, so the midges were out in force. So no hanging around and off I plod. The most common route to tackle Beinn Dearg from this car park is in the round of four, but as I was hoping to also take in Seana Bhraigh and later Am Faochagach - I headed towards Seana Bhraigh first.

The route is the same to head through the first Forestry Commission gate and then across the River Lael, but once over the bridge, instead of following the river, you head off left and start climbing up alongside Allt Glean a' Mhadaidh: 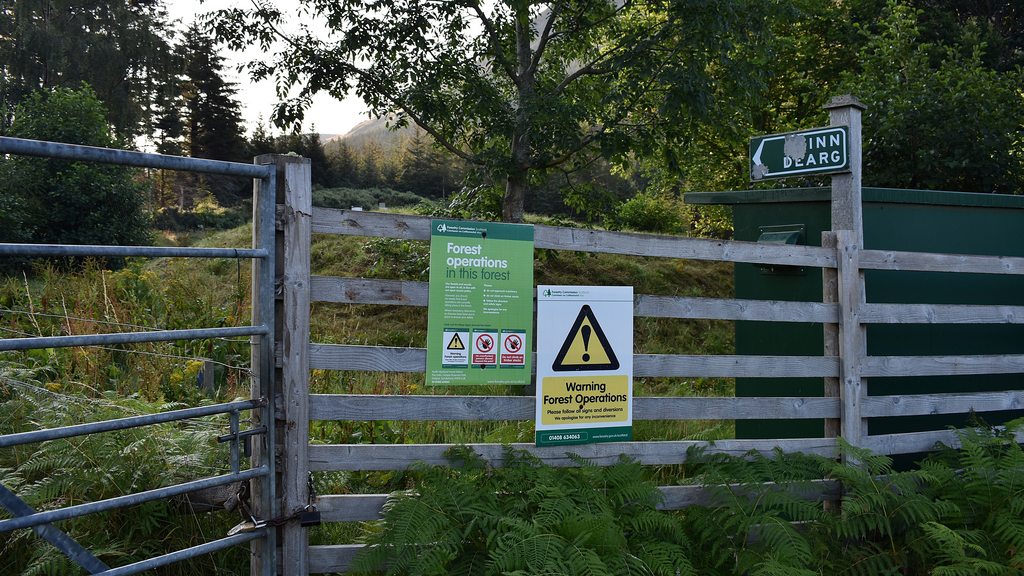 through the first gate 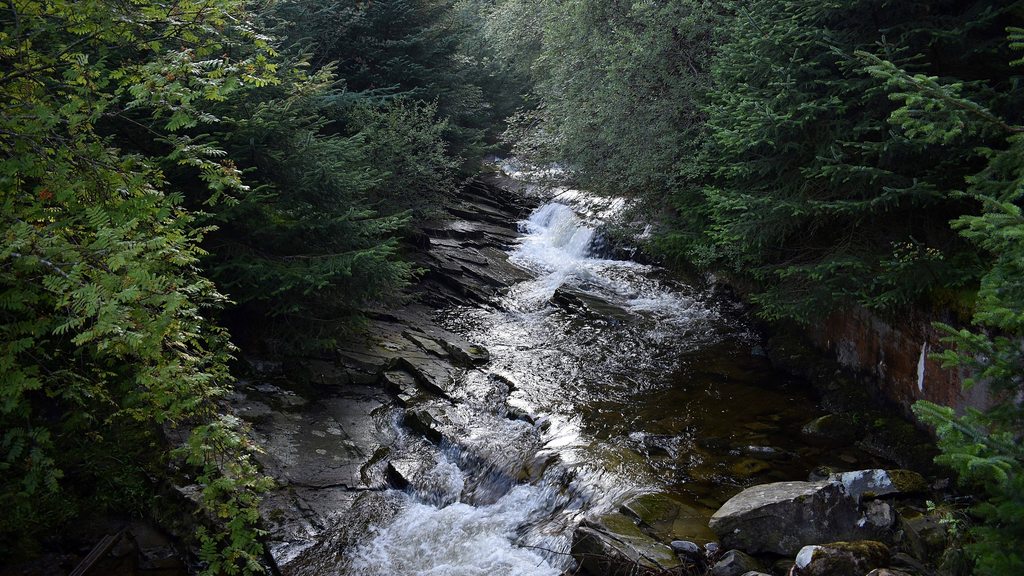 over the river Lael

Once you start climbing, the views really start opening up back towards An Teallach: 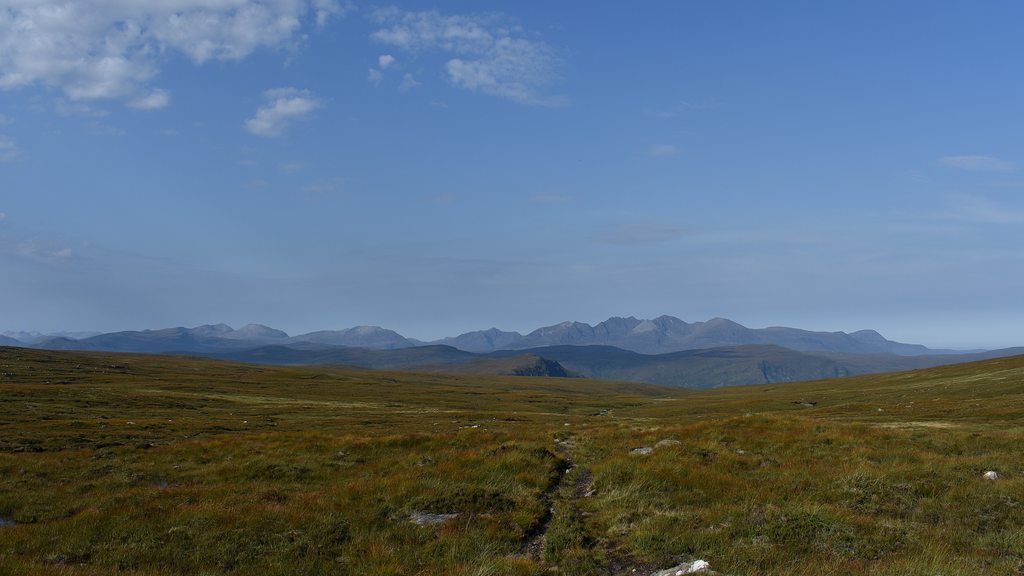 But it's a simple plod onward on steady incline. There's a very simple crossing of Allt Glean to navigate

and you eventually reach Lochan Sgeireach. There's a cairn on the way and this is where you get the first views of Seana Bhraigh: 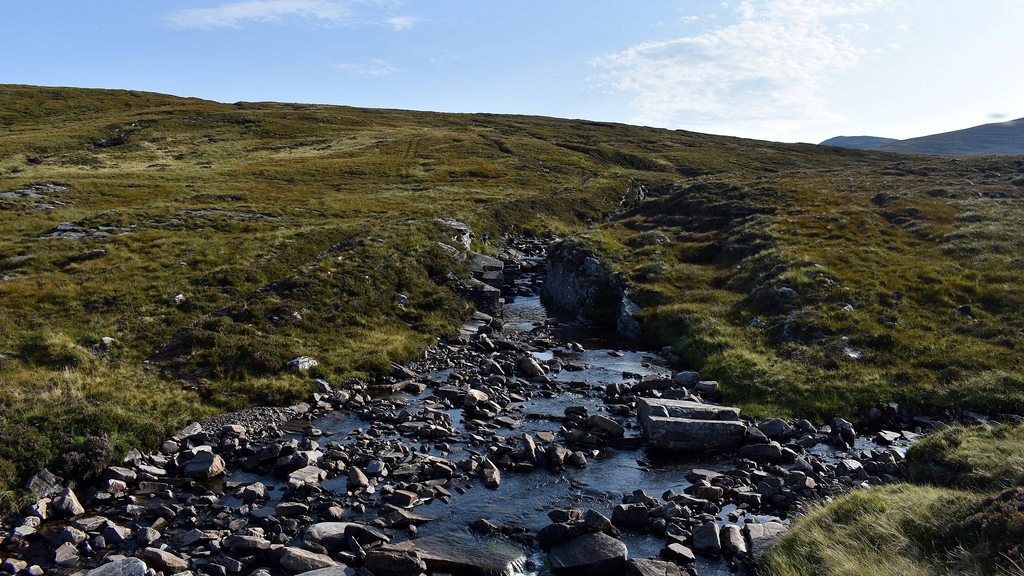 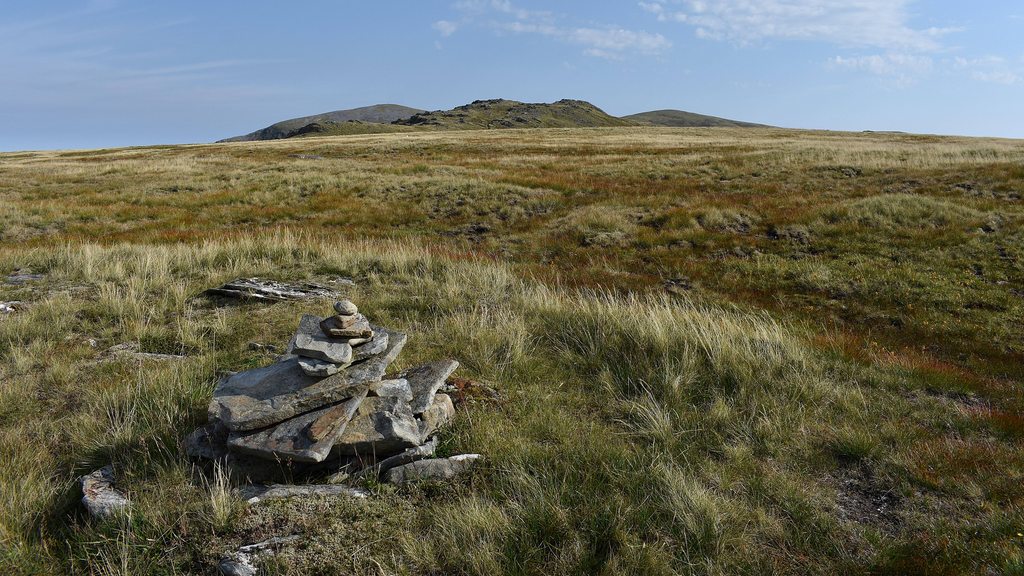 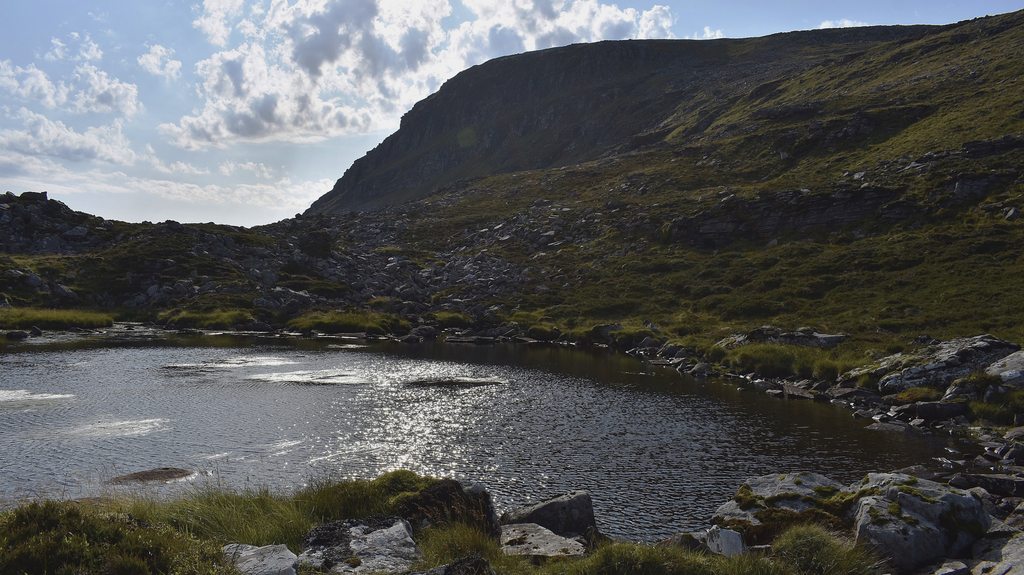 Once up to Meall a' Choire Ghlas then Seana Bhraigh comes into full view and it's a very straightforward and easily seen route up to it. It had been roasting up to this point but luckily some clouds rolled in just to take the edge off it for a while. From the summit there are some great views to Loch Luchd Choire. I didn't head to An Sgurr, but chatting to a couple of people I met later in the day - and reading the reports on here, this will definitely be one to re-visit and have a bash at the scramble up the North side! 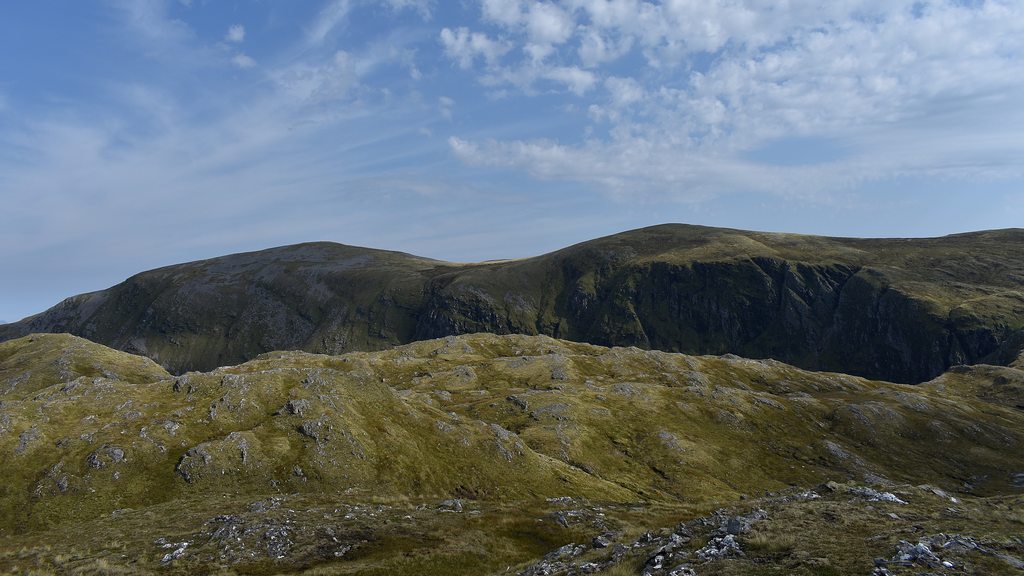 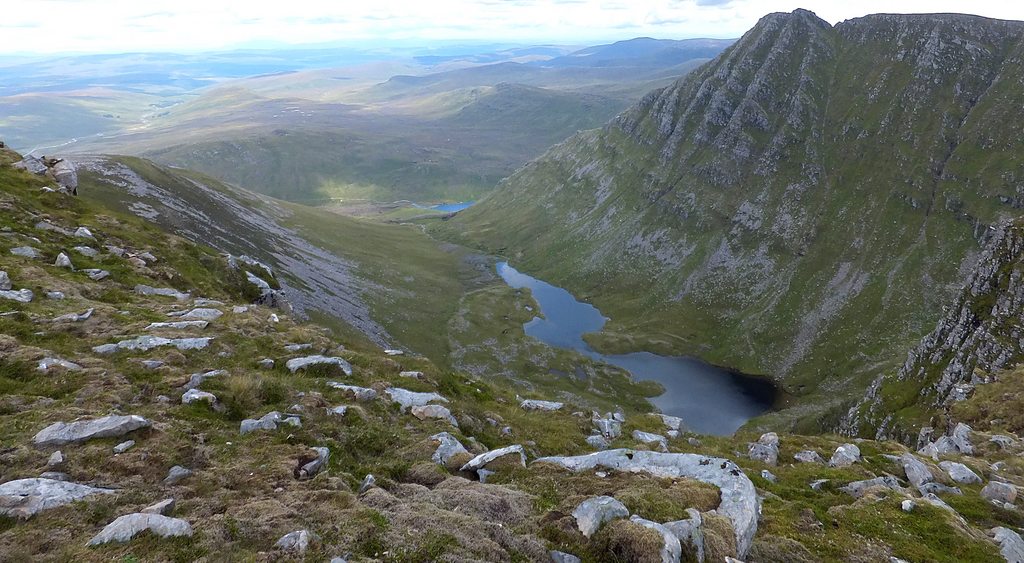 Loch Luchd Choire from the summit

I retraced my steps down to Meall a' Choire Ghlas and then just headed in as straight a line as possible up to Eididh nan Clach Geala. It's slightly rocky in places but an easy enough gradual climb: 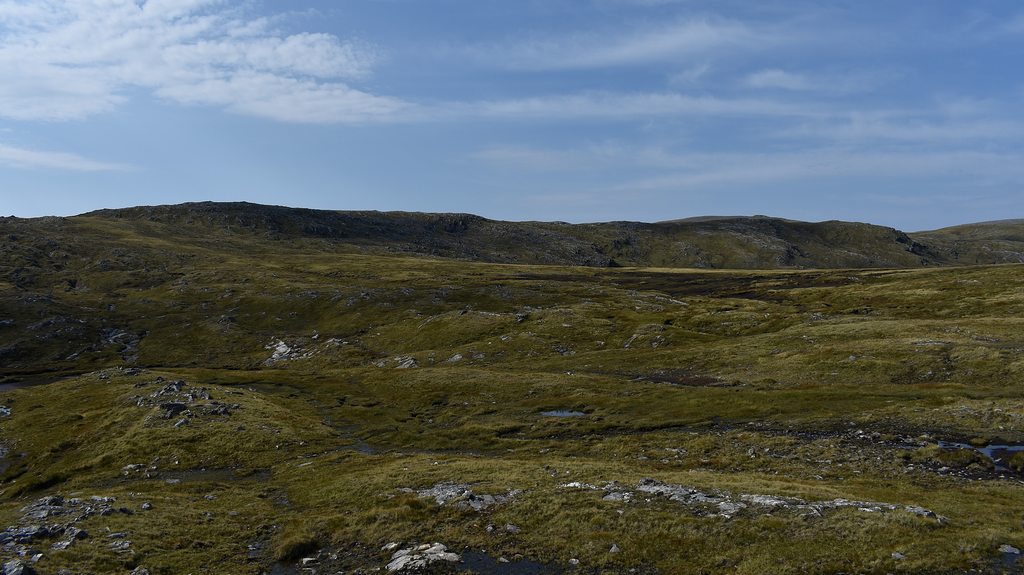 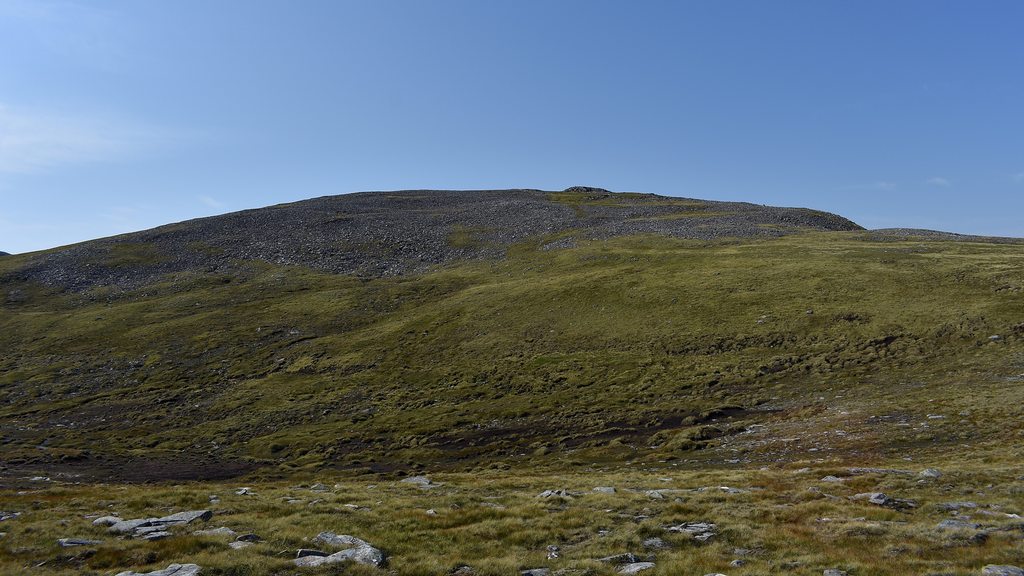 The views from the top are extensive and the clouds had shifted again making it a glorious summer's day! Not sure which cairn showed the true top, but there were two which seemed to be the same height: 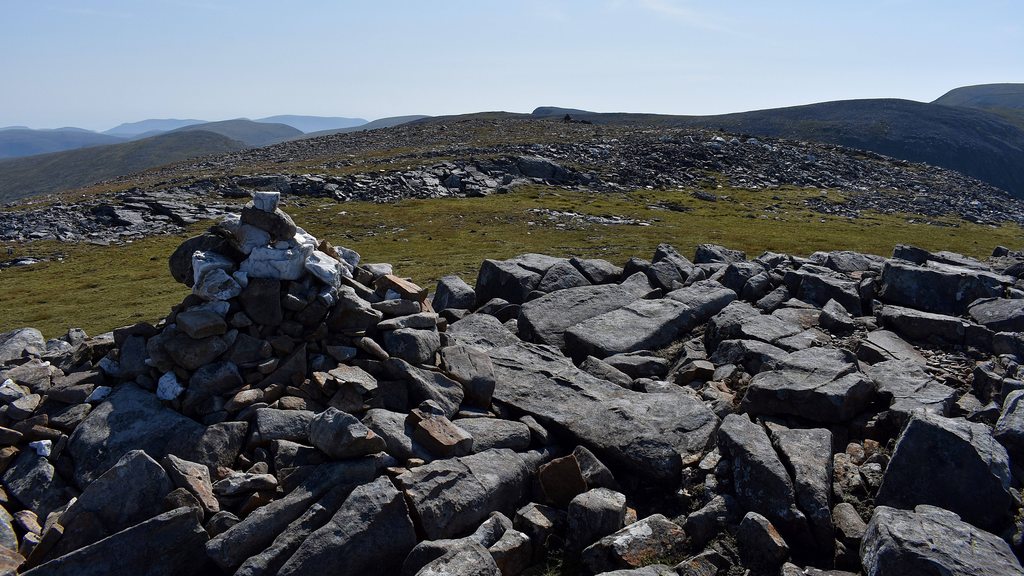 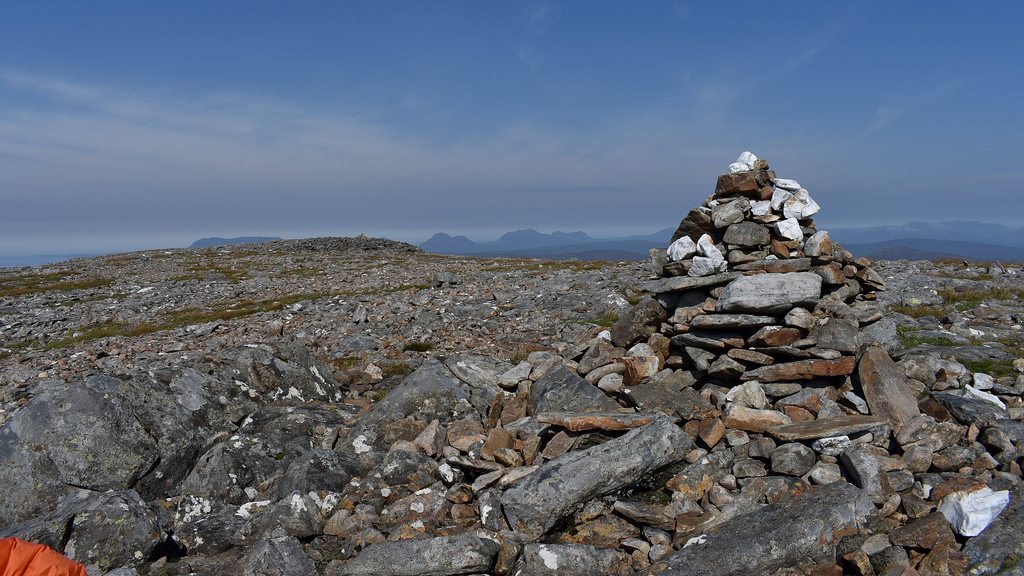 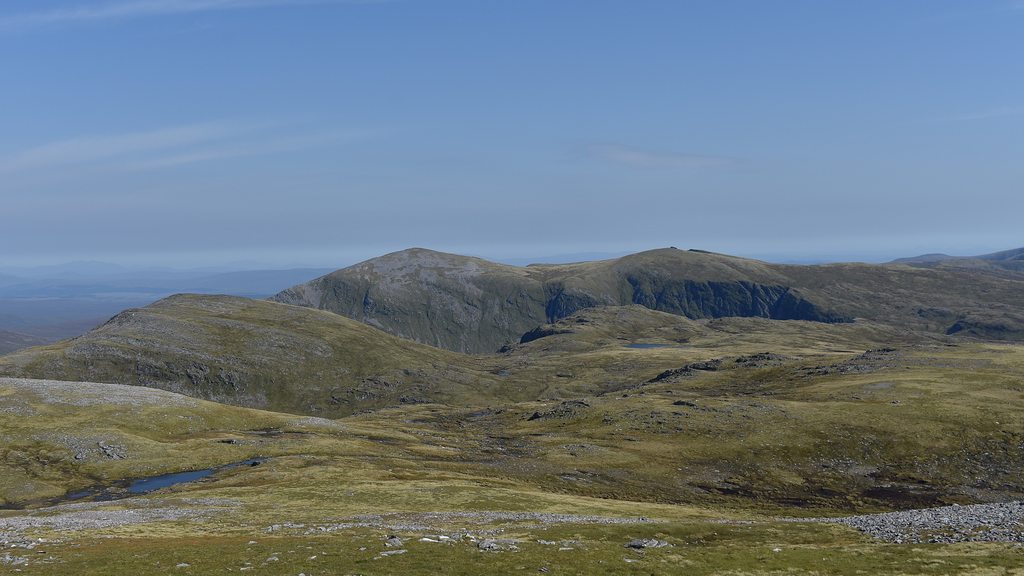 view back to Seana Bhraigh

The route down to meet the path that has come up through Coire Lochan a' Chnapaich is well-defined and you stay on this briefly before taking another generally defined path up Meall nan Ceapraichean. As you near the base of Meall nan Ceapraichean, it looks like it's going to be a very fun scramble up the side of it, but once you get nearer you do find the path: 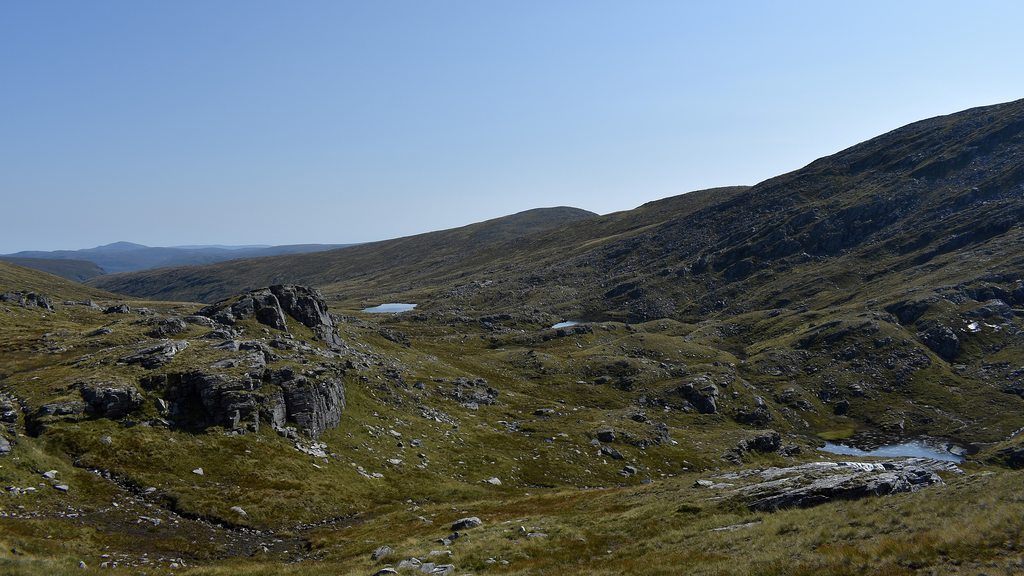 route down to Coire Lochan a' Chnapaich 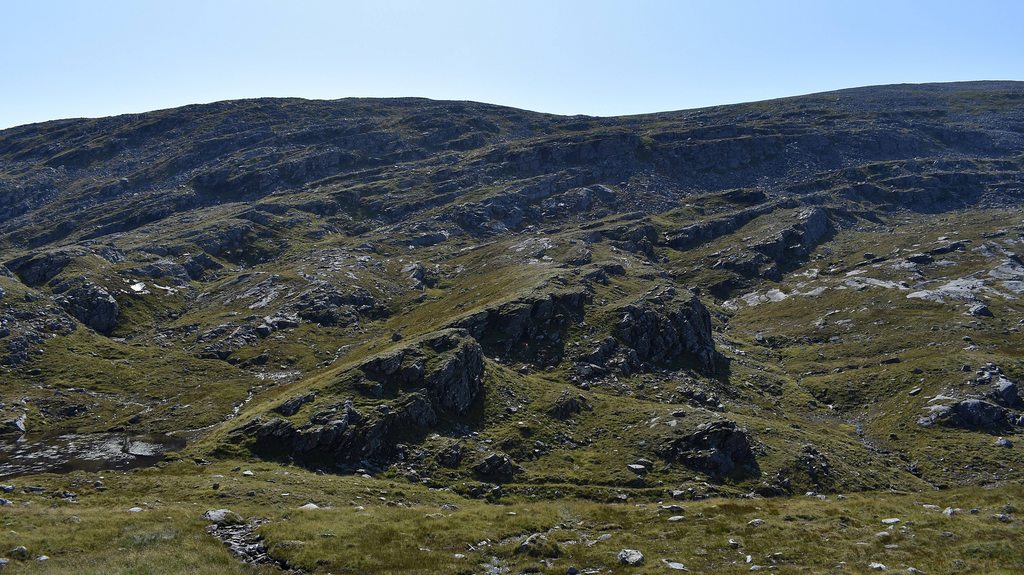 looking for the route up Meall nan Ceapraichean

I met a nice chap walking a friend's two dogs for the day - so stopped for some much needed water and a chat, along with a fuss with the doggies. The path up takes you up Ceann Garbh, but I just skirted round this and headed directly for the summit: 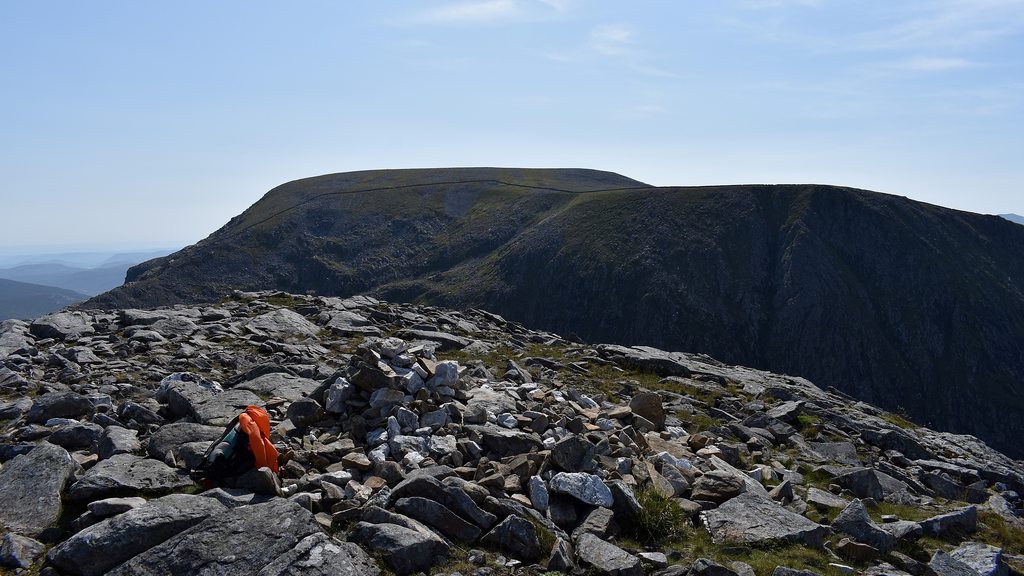 Meall nan Ceapraichean summit with Beinn Dearg in the background

From here I'd decided to head up Cona Mheall and see if I could manage the trek onto Am Faochagach. Again, coming off Meall nan Ceapraichean, the route was well-defined and I headed in as direct route as possible to Cona Mheall, but I ended up picking up a path which did that very thing anyway. I bumped into a young couple I'd met on the Fannaichs the day before - who were taking a year off from work to go and climb mountains across Scotland and Europe... very nice if you can get it - only a tad jealous 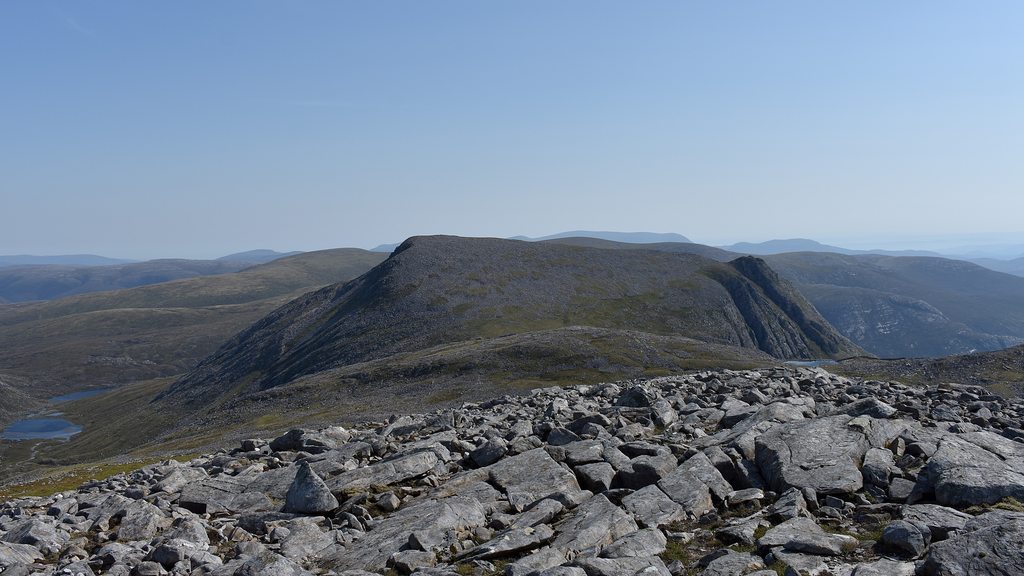 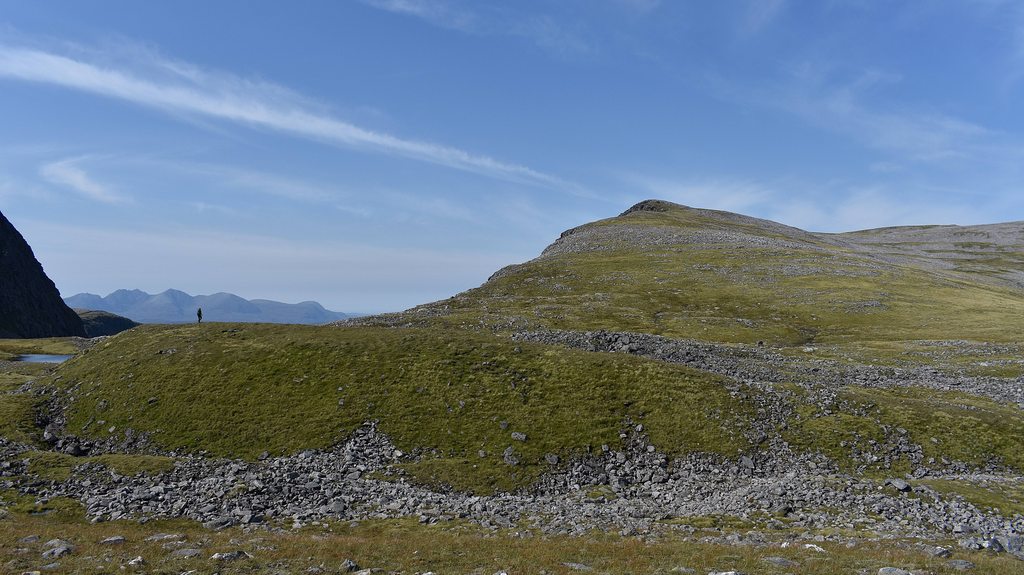 view back to Meall nan Ceapraichean when heading up Cona Mheall

The views from this route up to Cona Mheall are spectacular with the view down to Loch a' Choire Ghranda being my favourite. The path continues up to the summit where further wonderful views back to Beinn Dearg are on offer. The sun was beating down now so decided to catch some rays for a bit: 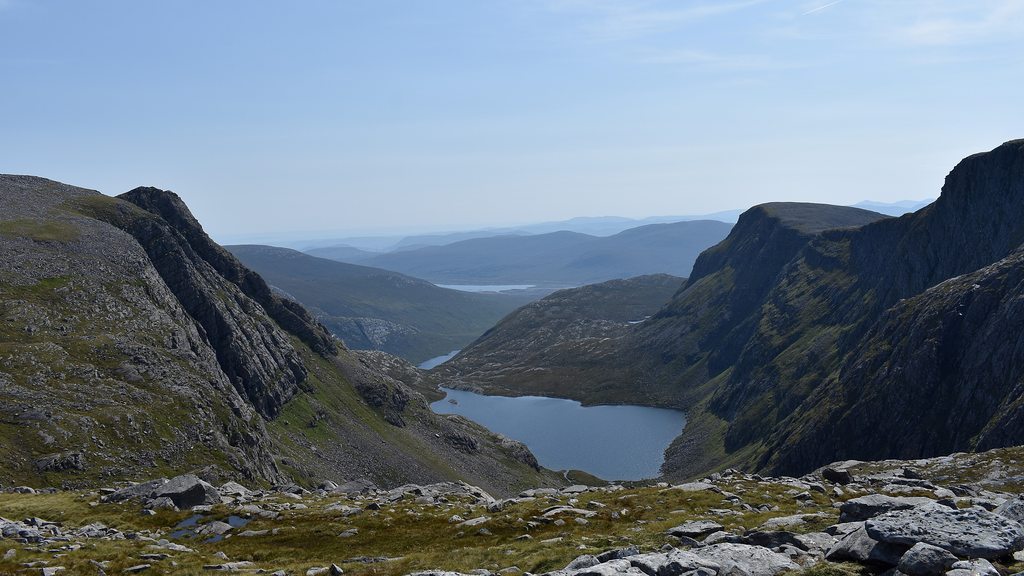 view to Loch a' Choire Ghranda 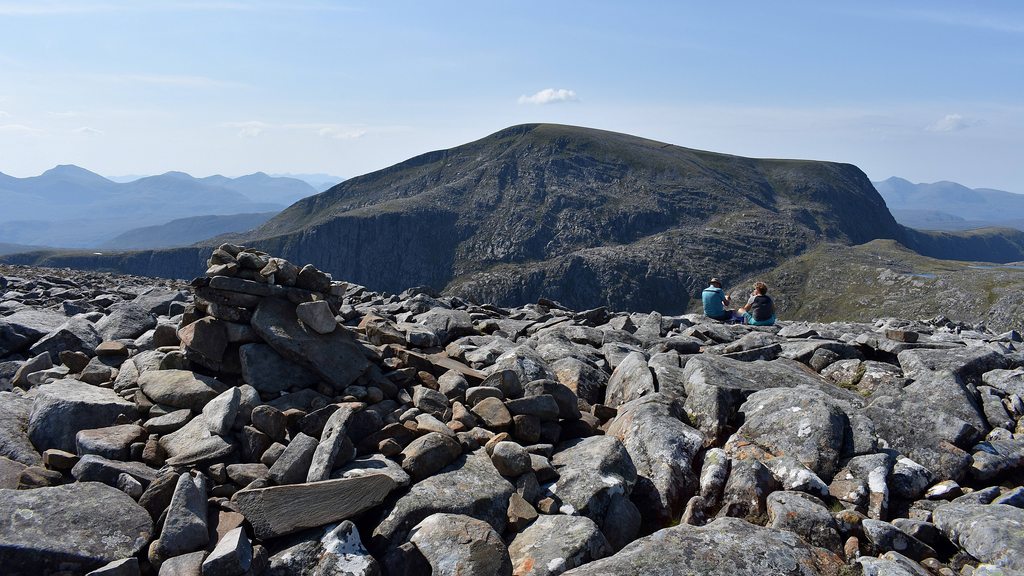 From here I got a good vantage point of Am Faochagach and could see that it was a comparatively gentle climb up from Loch Prille, after a slightly rocky descent down to the Loch. In fact Loch Prille is sat at around 550m so only a 400m climb across a distance of about 1.8 miles and as I found the route was on very good and dry grass, so it ended up at times, I was even able to jog up some of it!

Other than the views back toward the Beinn Dearg group, this didn't offer much: 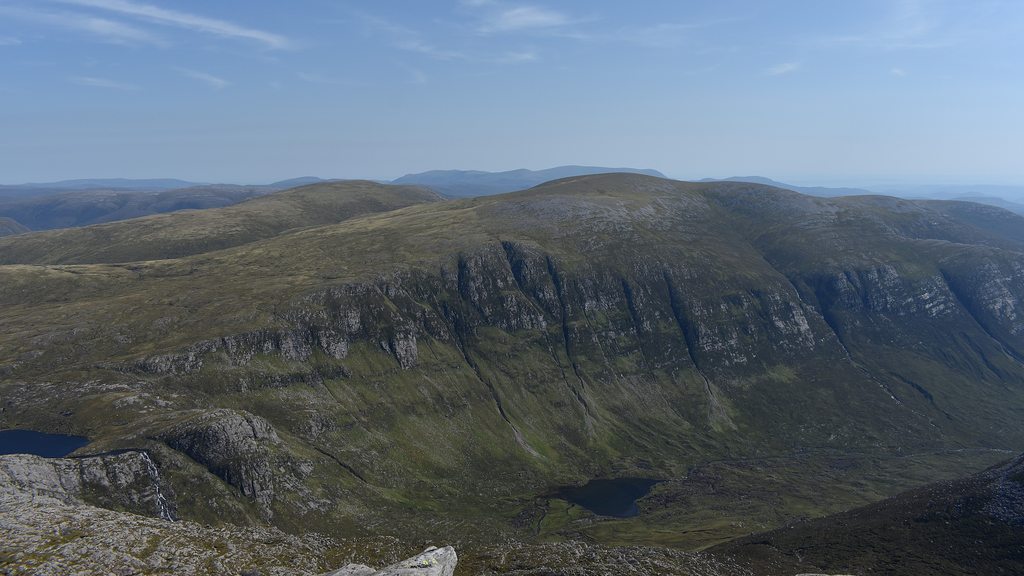 Am Faochagach - a nice steady climb 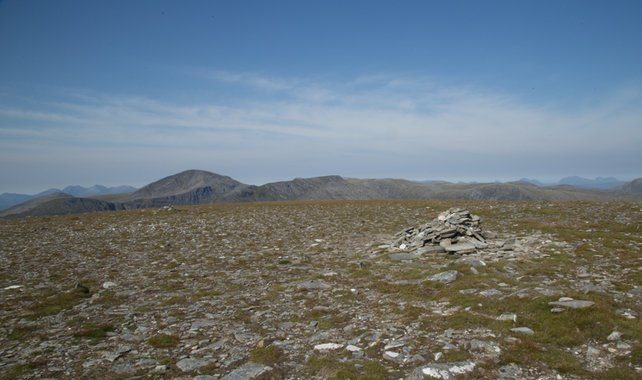 From here, retracing my steps back to Loch Prille was just about the quickest I've ever come down a mountain - it was great underfoot - I only wish I had my trainers on instead of me boots! From here I picked up the path that skirts around the bottom of Cona Mheall - mostly at around the 600m mark so there was more jogging to be had here. This then brought me out back at where I'd started climbing Cona Mheall earlier - offering great views up Beinn Dearg and the route to follow: 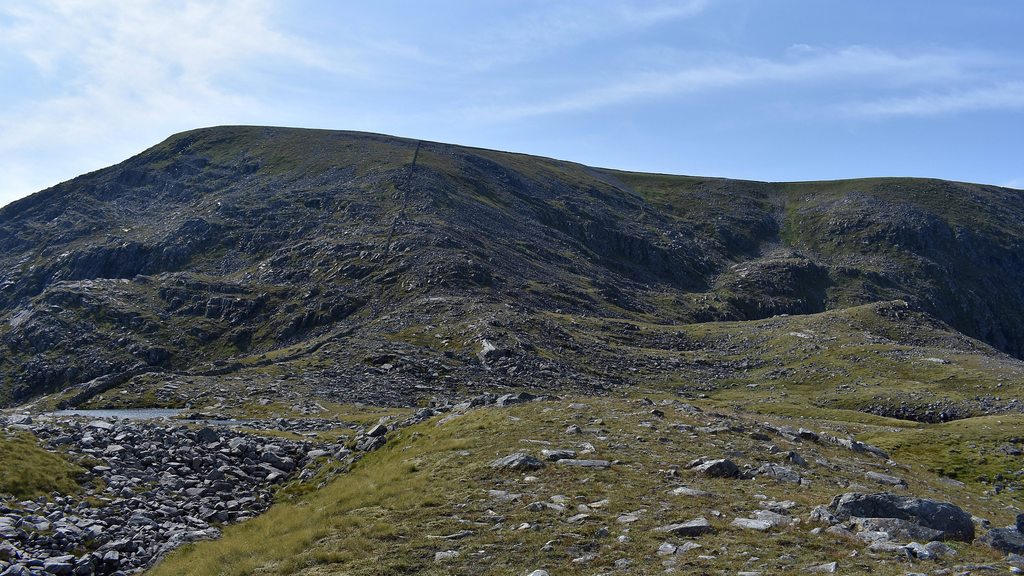 time to head up Beinn Dearg

I started to head up along the wall which is a sight to behold. Reminds me of the long srawling walls across the hills in Northern Ireland or the Dales: 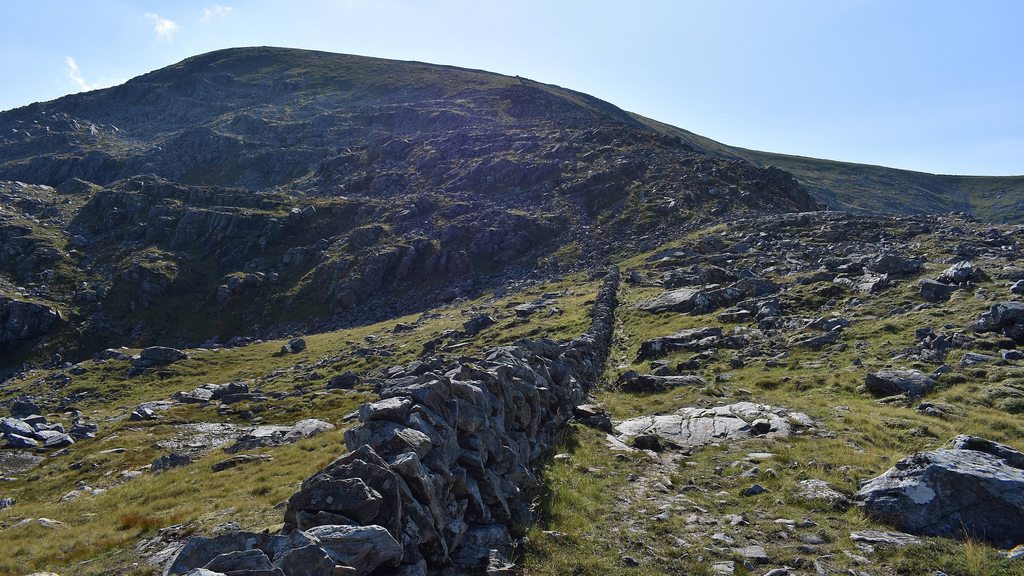 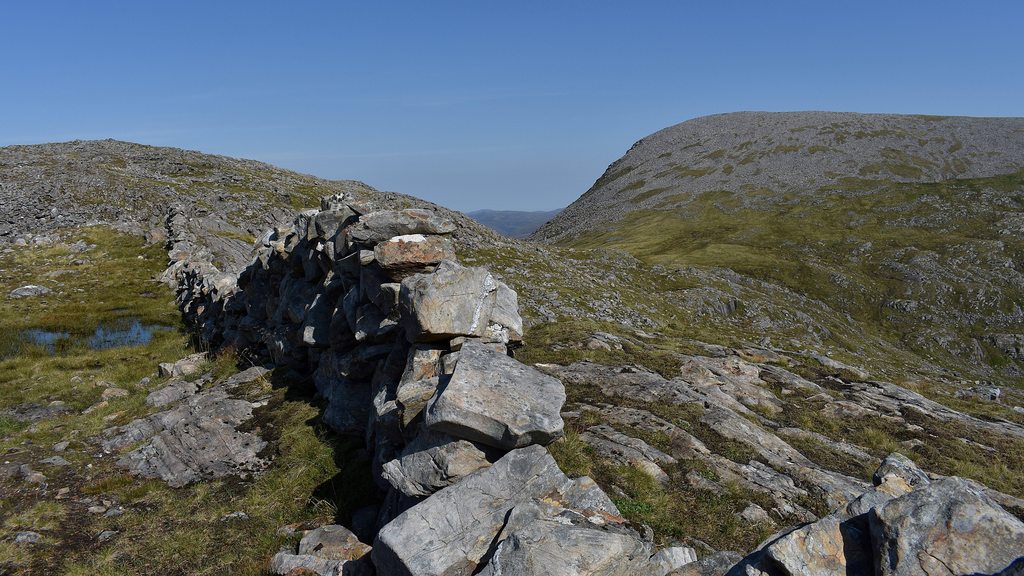 There are some pretty steep sections, but the path is again very well defined, so it makes the route mentally easier - and before you know it, you're up on the slightly sprawling summit plateau: 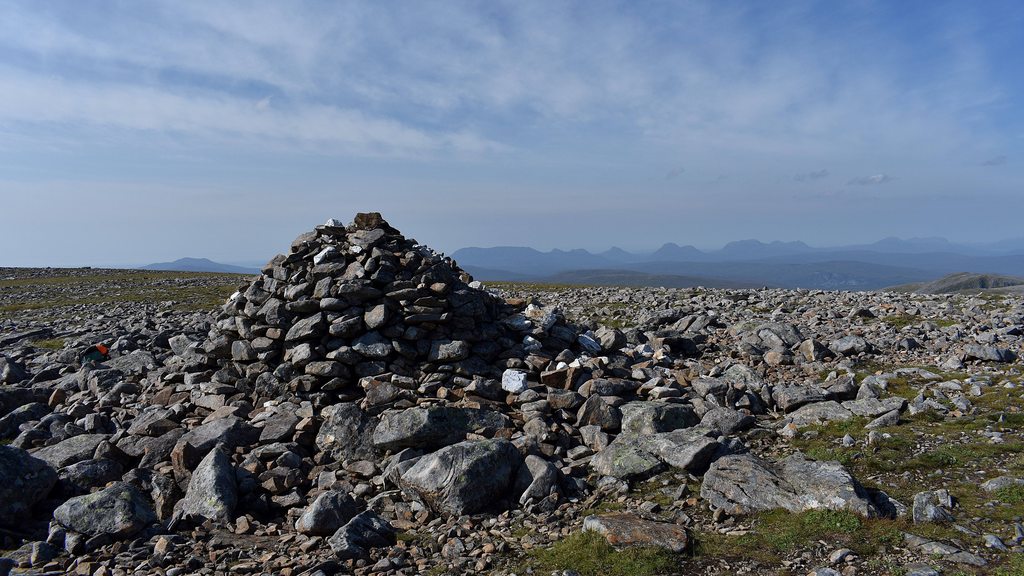 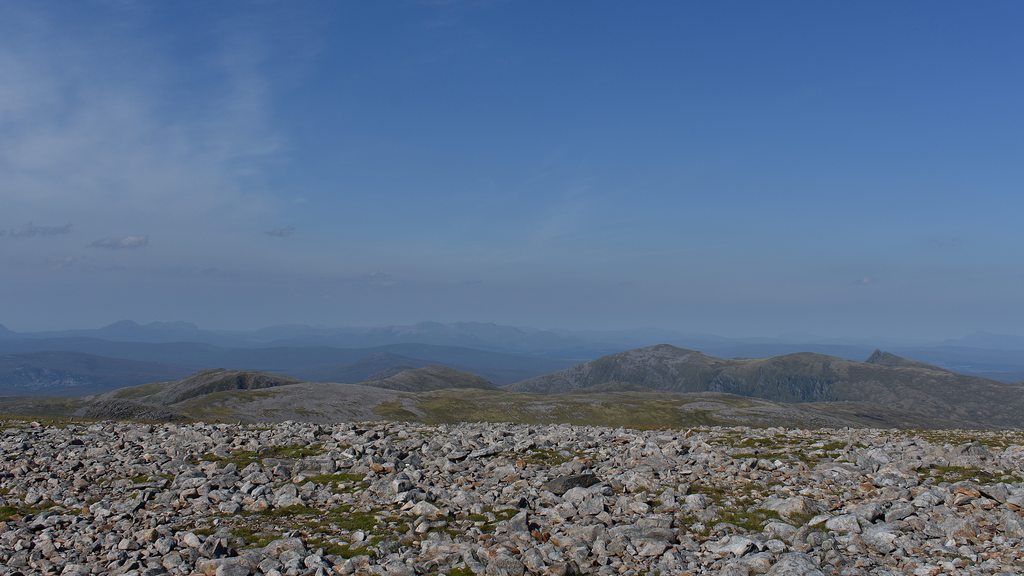 views back to Seana Bhraigh and others 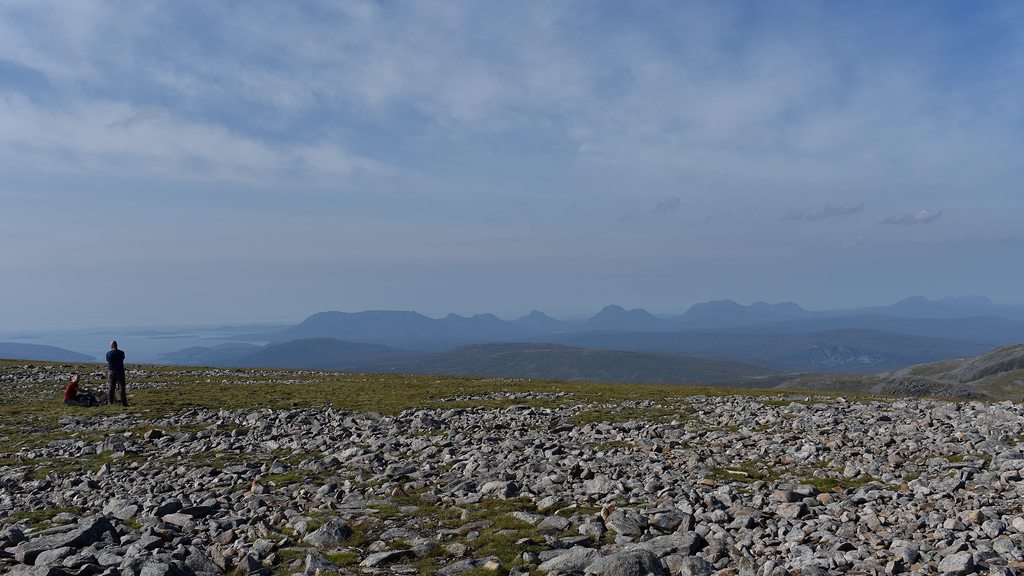 Coming off the summit I cut off a little from the path and just met up with the 'normal' path back down through Coire Mathair Lathail taking me all the way back to the car. This is a very gradual decline on a good path all the way, so a quick route back for sure. Some of the people I chatted to on the way back included three ladies who were in training for an 18 day trek in the Himalayas

Good luck to them!

Well worth waiting for a good day - these are among my favourite hills. Did these six as a traverse from Inverlael to Loch Glascarnoch in the snow a few years back - and took a lot longer than you !....but was carrying a 19kg winter camping pack

Can well remember the descent from Cona' Mheall to the head of Loch Prille which I couldn't have done without an ice axe. Would like to get back some time at a different time of year. Thanks

I'm with Rockhopper - some of my favourite hills in that lot and definitely one of my most gruelling but memorable hill days. I must say though that I'm a bit disappointed that you bottled it and didn't tag on some of the neighbouring Corbetts and Grahams!

Well worth waiting for a good day - these are among my favourite hills. Did these six as a traverse from Inverlael to Loch Glascarnoch in the snow a few years back - and took a lot longer than you !....but was carrying a 19kg winter camping pack

Can well remember the descent from Cona' Mheall to the head of Loch Prille which I couldn't have done without an ice axe. Would like to get back some time at a different time of year. Thanks

I'd really like to be amongst these hills in winter!

I'm with Rockhopper - some of my favourite hills in that lot and definitely one of my most gruelling but memorable hill days. I must say though that I'm a bit disappointed that you bottled it and didn't tag on some of the neighbouring Corbetts and Grahams!

Cheers Graeme - there was a chance I'd tag on Beinn Enaiglair on the route back... but the beer was calling

Huff_n_Puff wrote:Great report - love these hills too and your photos really do them justice

Cheers HnP - amazing what blue sky does to photos