After the past two days consisting of some Ettrick Hills redos (as we thought we'd missed the tops by ~30m - turns out it was <6m) and the Eildon Hills respectively, I was eager to finally get some Donalds done (the reason why I was actually staying in Hawick for a week). Today was the only day that I had a partner joining me, and this was to be the last Donald day with one for that matter! Iain and I had agreed I'd meet him at the top of Selkirk but he'd ended up having to cycle it - no easy task as it's almost all uphill from Walkerburn. I ended up picking him up an hour and a bit late a few miles outside of Selkirk. The drive over was very pleasant as I seem to have begun enjoying country roads more now that I am more confident on them, but the 7 mile road to Cocklawfoot was probably the most unbelievable road I have ever been on, no less driven on. A few hairpin bends and ford crossing later, we arrived.

I initially didn't know when to turn off so we ended up having to steeply climb the E side of Kelsocleuch Rig, which got the sweat going. It was immediately apparent when on the rig that it was going to be a windy day.

Sheepfold with some native Cheviot sheep: 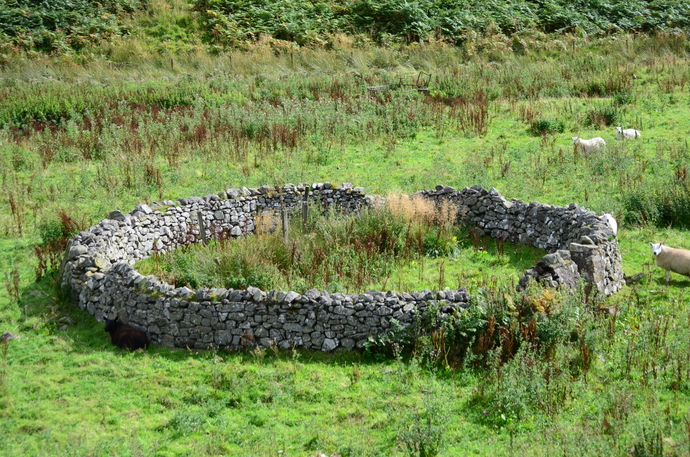 Closer in with the camera: 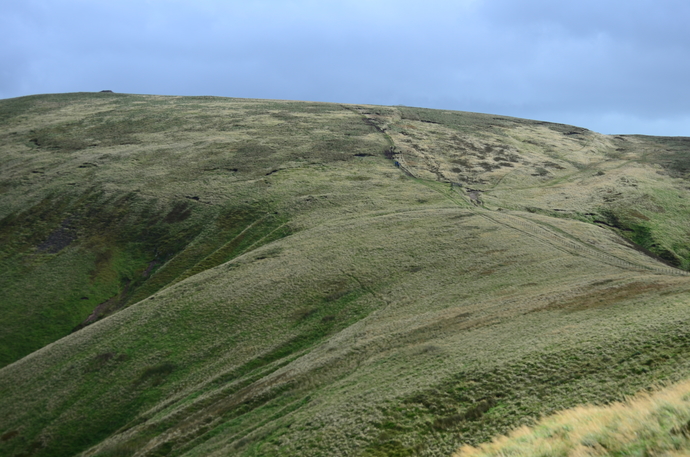 Looking NE; The Cheviot in the distance: 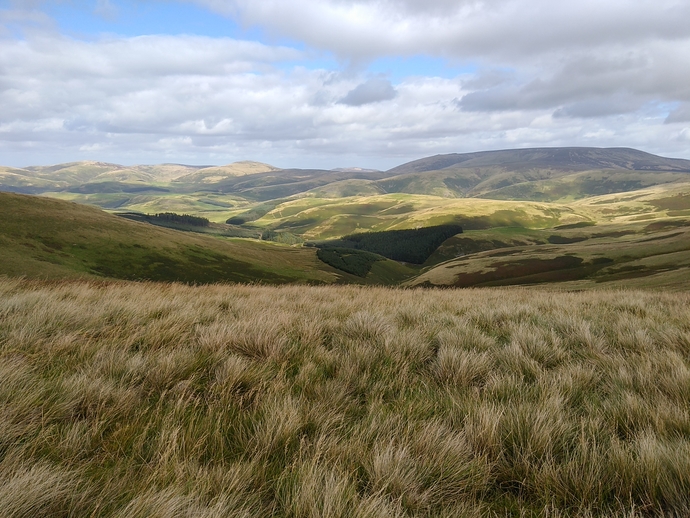 It was a pretty painless climb up to Russell's Cairn, where both shelters were bagged by earlier walkers. Windy Gyle was certainly living up to the name - both the 'Windy' Donalds have managed this! We stopped for 10 minutes to warm up with tea and whatever else we'd taken from the petrol station. The sun being out was the only thing making the conditions bearable. We headed off afterwards on the enormous trod over to Hangingstone Hill, crossing the border shortly onto the flagstones. I didn't take many photos as there really isn't much to see apart from the horizons. 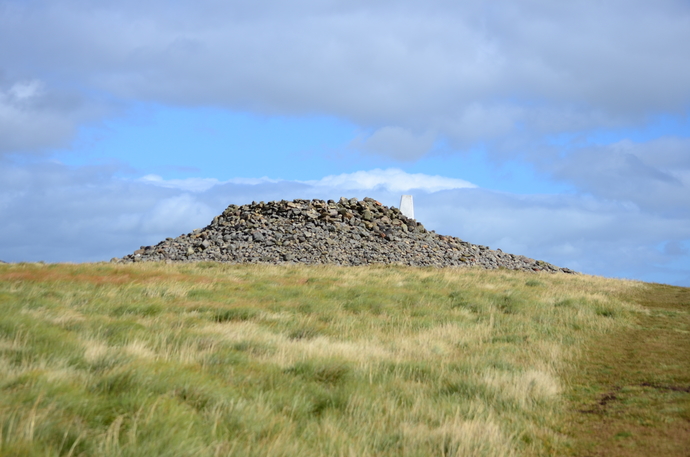 The fourth lizard I have caught this summer: 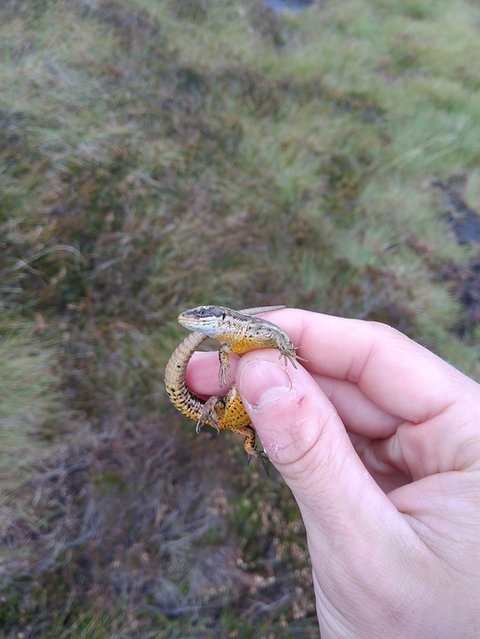 We were in awe of the effort of laying the flagstones the entire way across the ridge - the man hours and labour involved must have been enormous. Our decision to wear wellies was nonetheless still sensible. 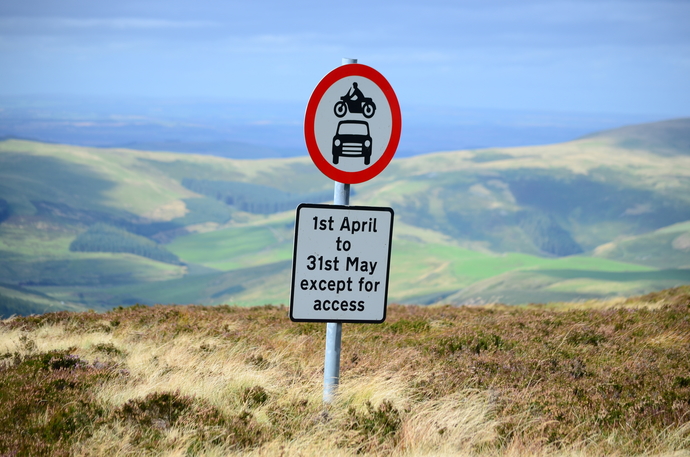 After the ascent recommenced and we passed the King's Seat trig, Hangingstone Hill was not long after. The apparent top is, rather rarely, where OS say it is and the signpost junction is clearly not the actual top. The flagstones got us up gradually to Cairn Hill and after that it was a minimal final push up to the 35th highest point in England (and highest outside of the Lakes and the Pennines). There was a very excitable dog at the top and the wind was getting on for 60mph in my estimation. We hunkered down behind the monolithic trig, after I had stood on its top, for a second lunch. The arrival of a lady, who sounded like she was doing a walk much longer than ours and remarked jealously at our choice of footwear, sent us on our way back down to Hangingstone Hill to begin the descent. We couldn't talk that much as we were now walking into the wind but by the time we'd got to Cairn Hill it had died down. Auchope Cairn was a spectacular viewpoint and the view down Hen Hole only seemed to get better, looking so unbelievably unlike a regular Donald spectacle, and felt extremely remote. We could see diggers north of The Cheviot summit which turned out to be peatland restoration workers, enlightened to us by the mountain refuge hut, which was reached after a steep descent and a small walk up. 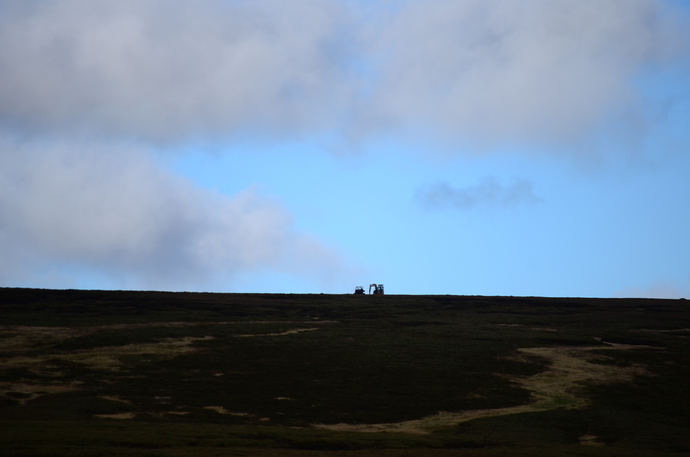 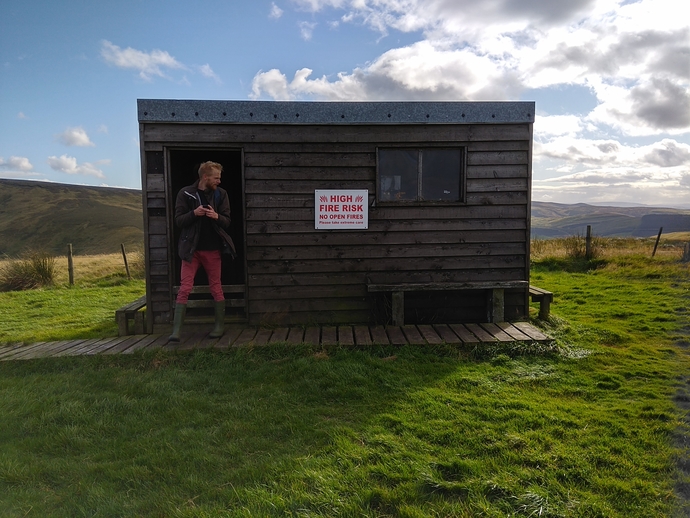 I was surprised to see so many 2019 names scribbled onto the inside, and the fact that the hut is nothing more than an empty shed, albeit very sturdy. It was now an easy grassy walk back along Auchope Rig. 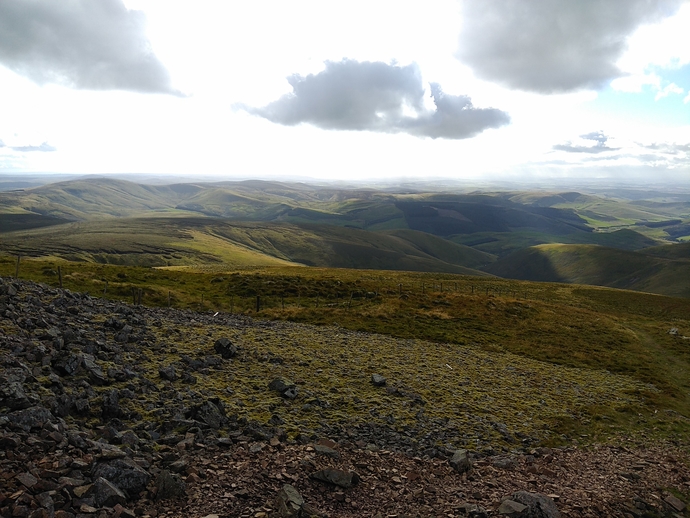 A 20-minute grassy walk ensued before we reached the agony of the stony farm track which led us down to a forgivable, and flat, track before Cocklawfoot, the endless pheasants and partridges resuming once again. The farm is in an uncannily tidy state and was a welcome end to our walk in the glorious evening sun, before the long drive back.

Re: The Windy Gyle & The Gale Force Cheviot

An interesting report on what looks like quite a distant Donald for me , can't imagine several hours in wellies !

Re: The Windy Gyle & The Gale Force Cheviot

iainR wrote:An interesting report on what looks like quite a distant Donald for me , can't imagine several hours in wellies !

Aye they're not an easy bag Iain! If you think that's bad wait and see what reports I'm writing at the moment!