Another holiday booked at Bunroy Holiday Park we were hoping for a bit of September sunshine, for two reasons really, one, this was to be Denise's turn to reach the 200th Munro mark, she was on 199 so the first one would get her there and, two, we both needed to get out in the hills and relax after an awkward couple of months, being made redundant certainly upsets the routine and I was worried that, at my age, it was going to be difficult to find work, thankfully, it wasn't and I've got another job, so now our routine, although slightly altered, has been re-instated

We'd been doing a little catching up over the last couple of trips, to close the gap between us, Denise needed nine to catch up and, with us being based close to the majority of them, it felt right to close the gap and get her closer to her 200 at the same time.

Sgurr a'Mhaoraich was one Munro that was fairly close to Roybridge, it was new to both of us, fairly straight forward and looked an ideal mountain to break us in after a few weeks away from the hills.

We were doing the usual weather watching during the week prior to our trip and it was looking promising for Sunday 8th so we were set to have a good day and achieve our goal.

Sunday morning was dry, a little grey with the clouds sitting on the tops but it was warm, this concerned me a wee bit because when I went to get my map I realised I'd left it at home

, the route was in the GPS and we agreed that if it wasn't an obvious path we'd go back down. We set off early to make sure we could get a spot for the car near the start of the walk.
We were lucky, there was a spot in the little layby right at the start of the stalkers path heading up Sgurr a'Mhaoraich, there was already a car parked and another pulled up just after us so the space was full, we chatted to the driver for a couple of minutes, he set off up before us, the midges were out so the boots were on, rucksacks shouldered and we were on our way up PDQ

The path is very clear from the start and remains so for most of the walk, all the mountains were in cloud from about 700m up so it looked like Denise's 200th was going to have limited views which was a shame but at least it wasn't raining. 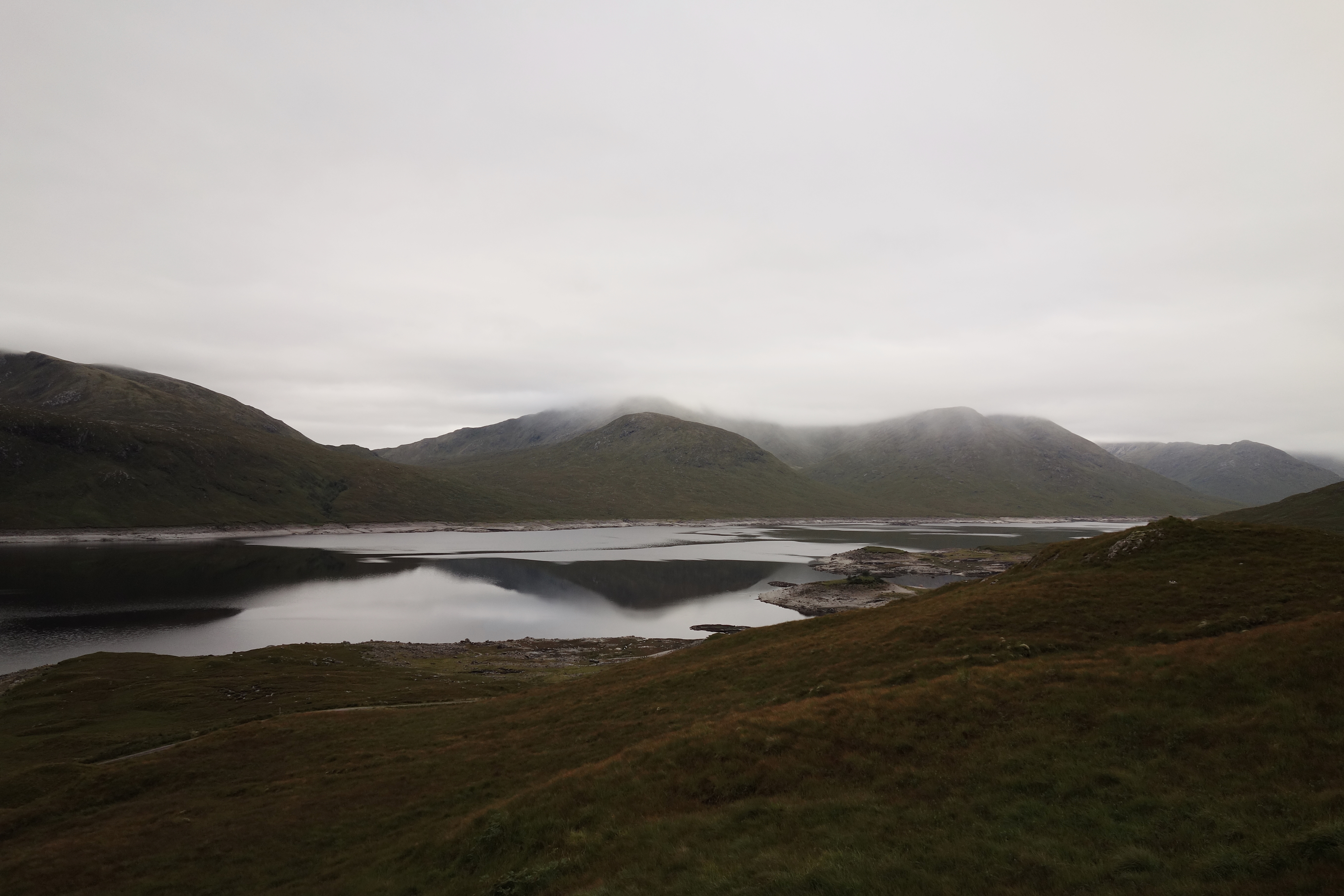 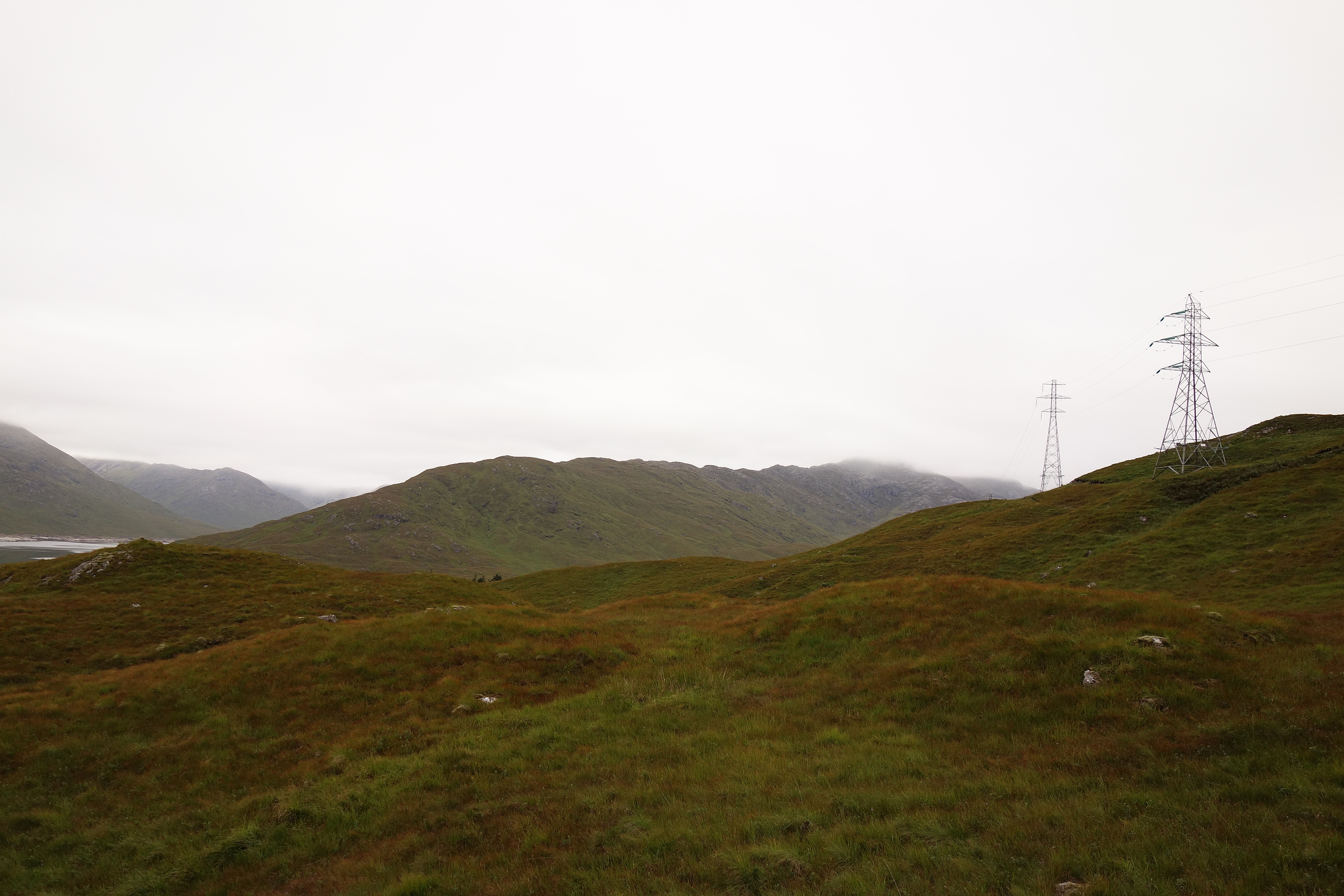 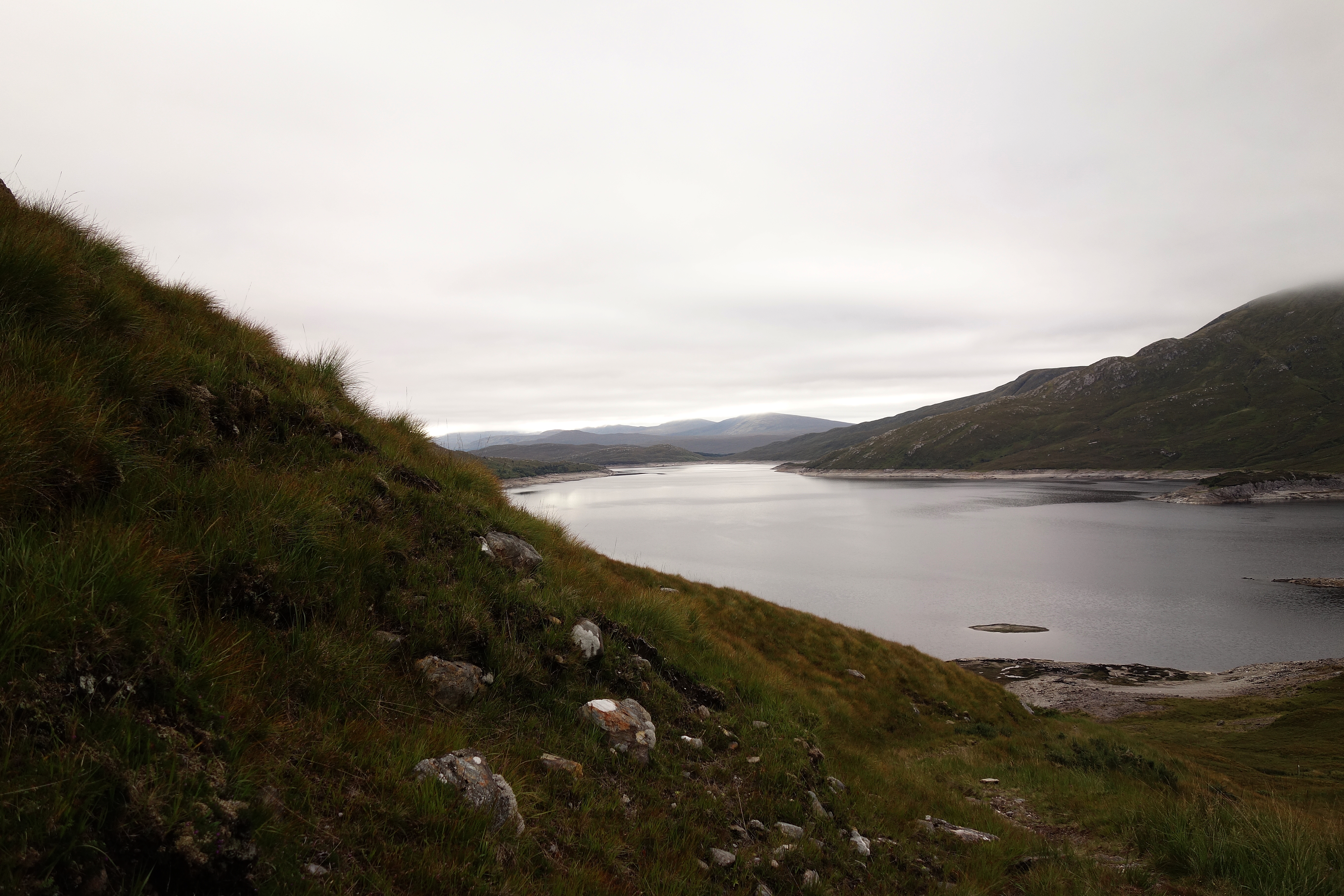 The walk up is nice and steady which was ideal for us, the only steep bit being the final climb to the summit. 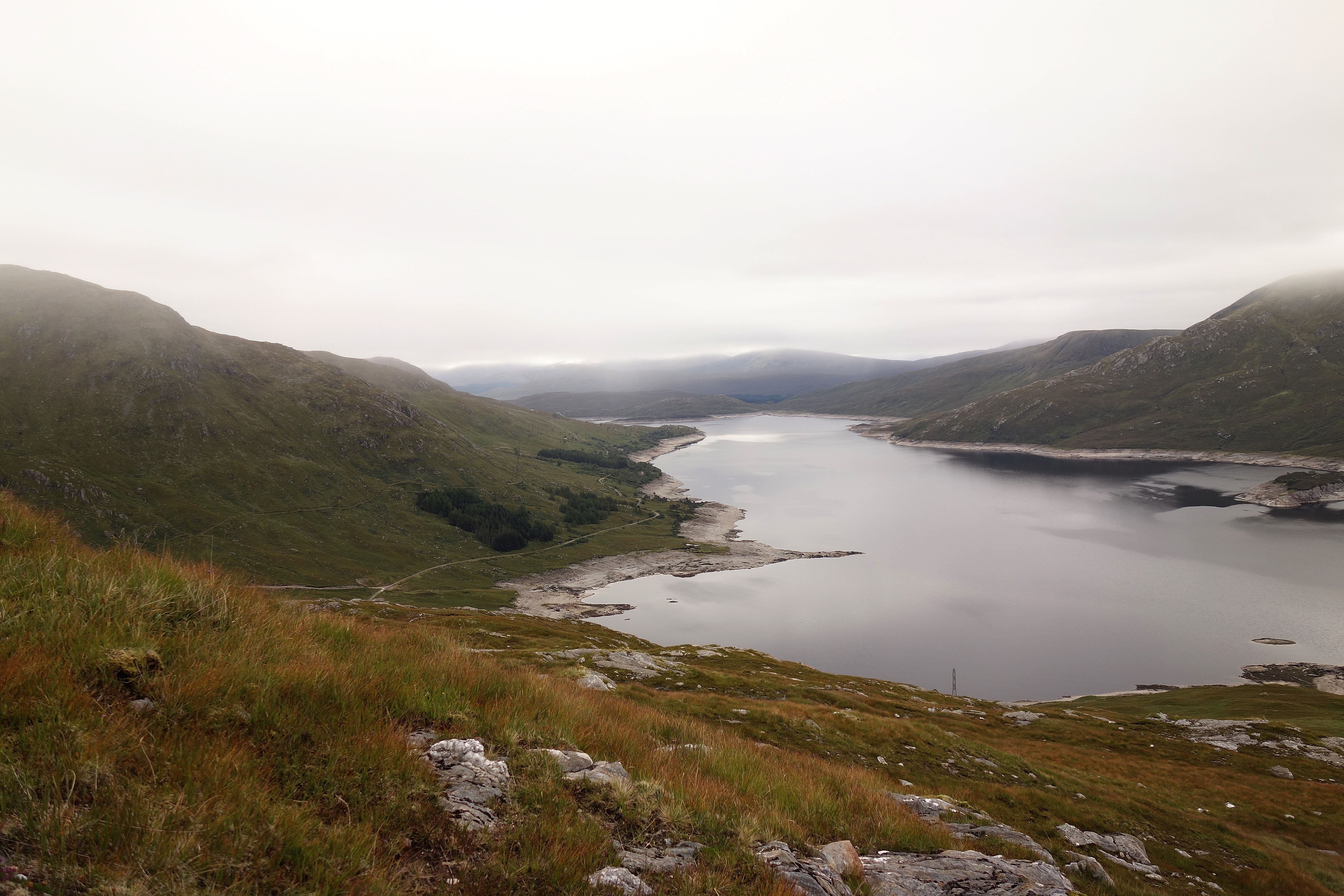 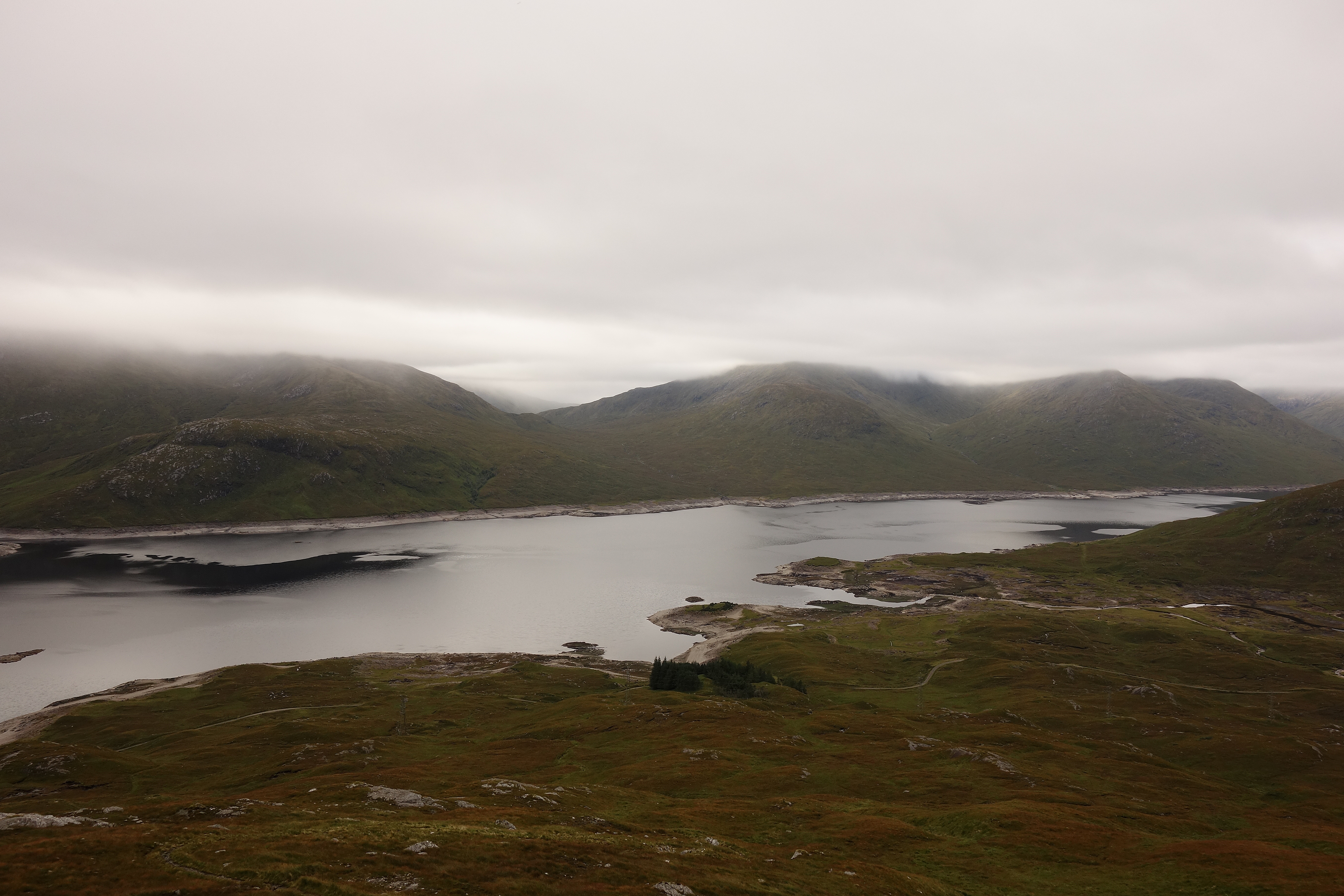 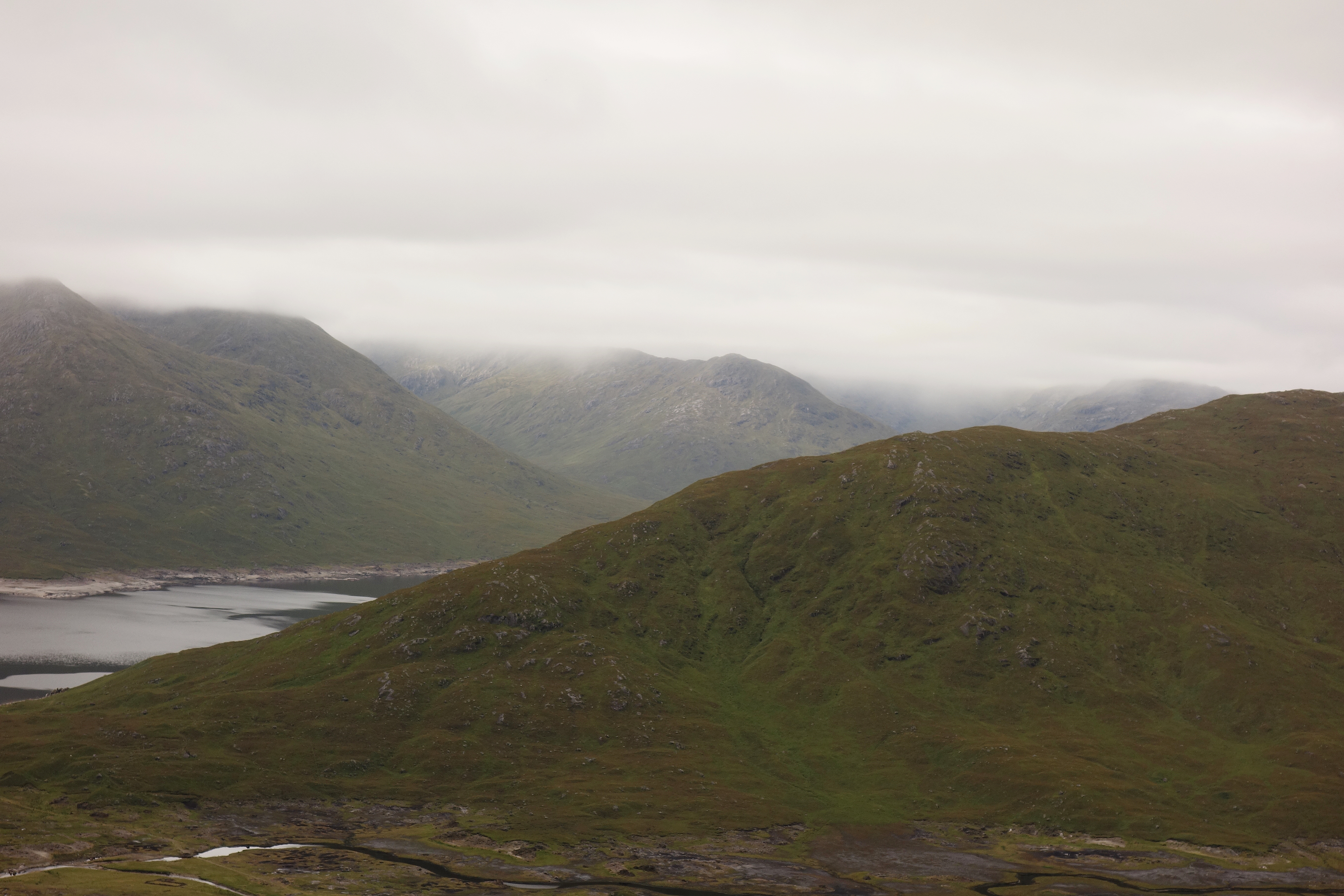 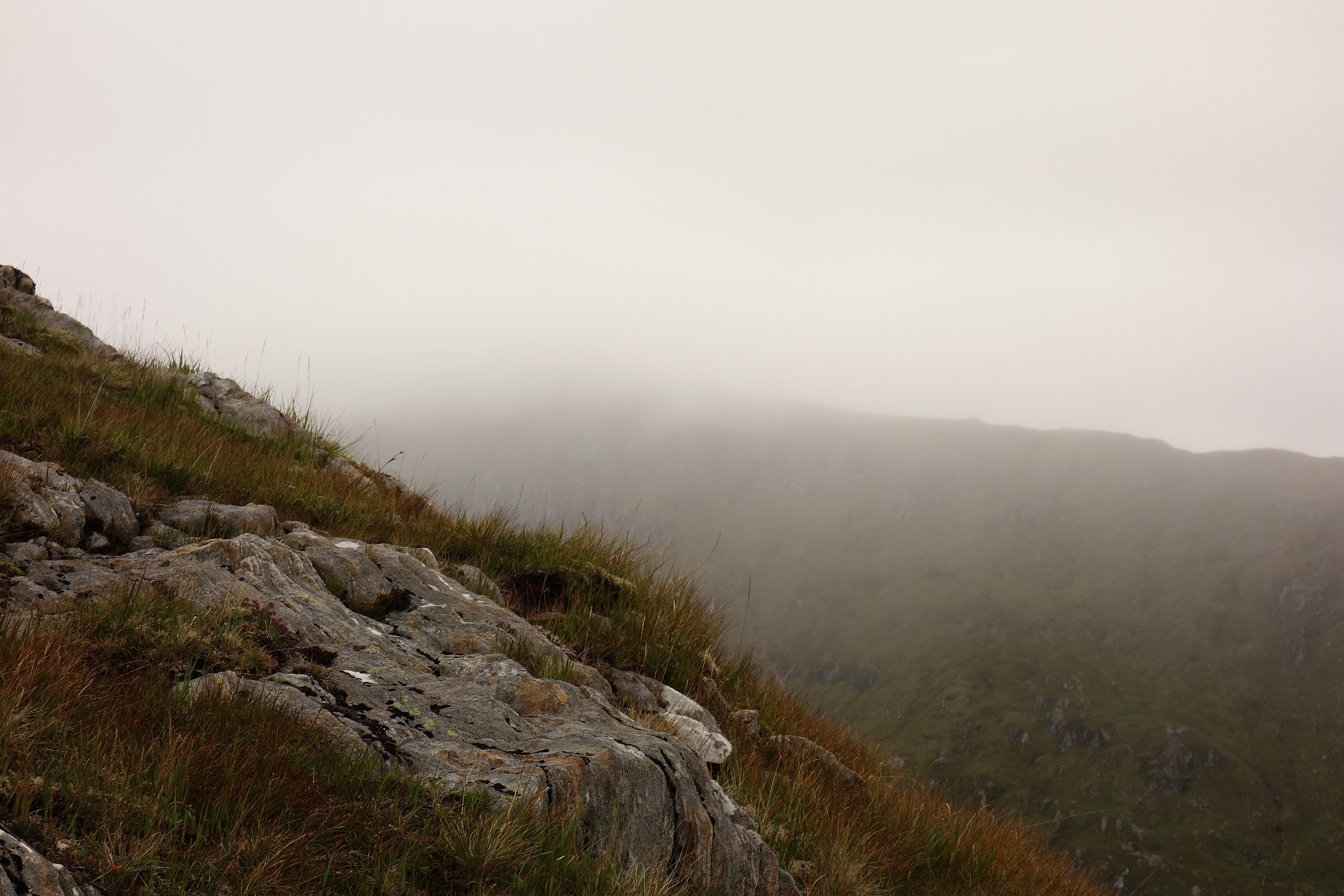 we found it again about 30m further on, it's surprising how the mist can change the way things look, it was a bit unnerving especially without a map, it was here we decided to make this an up and down the same way munro day and leave the WH route for another time.

We reached the cairn on Sgurr Coire nan Eiricheallach and stopped for a rest and something to eat.
From here the path is good, it descends a wee bit and follows the nobbly ridge crossing a couple of drystone walls on the way. There's a section of boulders to cross just as you get to the last pull up to the summit but the path is plain so I managed to maintain a level of confidence that we'd reach the top of Denise's 200th.

The final 20m or so is steep and climbs up alongside a craggy bit, once above this the summit cairn comes into view, which was a relief, it's just a short walk up to it and there we were, Denise's 200th, it was looking a bit brighter, would the cloud lift for views? nah, it was a case of default views for this one again 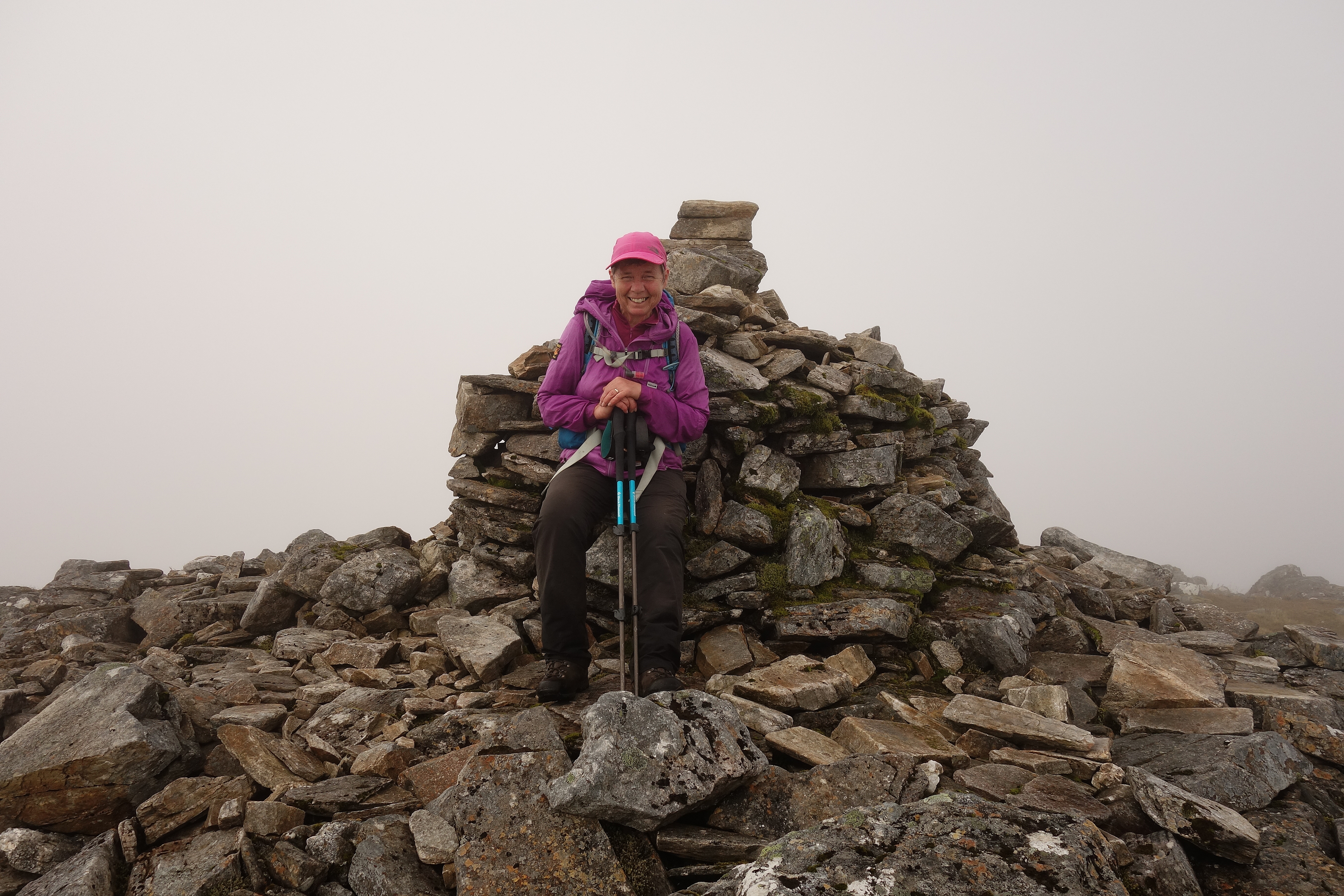 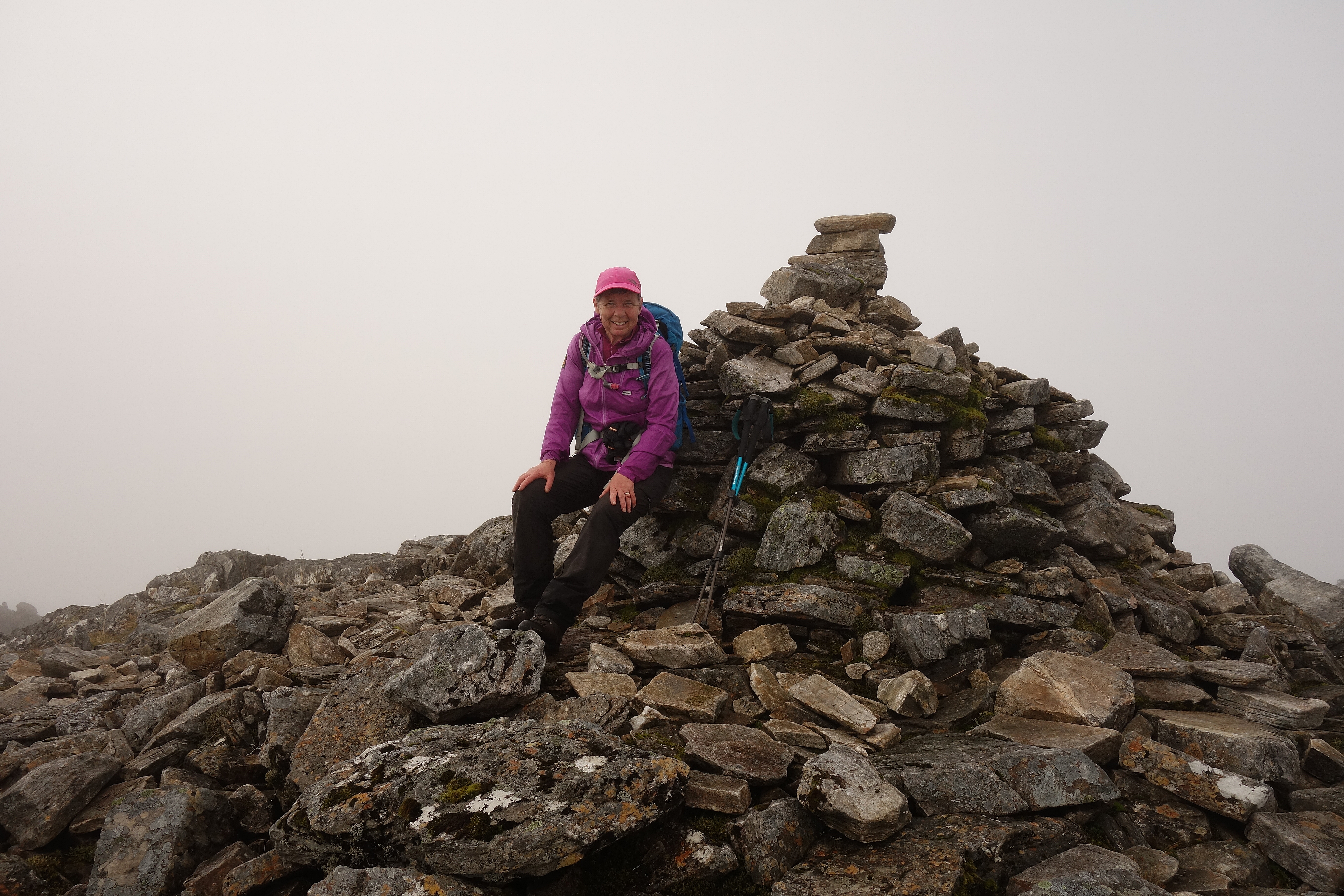 We met the guy from the layby on the top so asked if he would mind taking a snap of us both on Denise's 200th summit, he obliged so here we are. 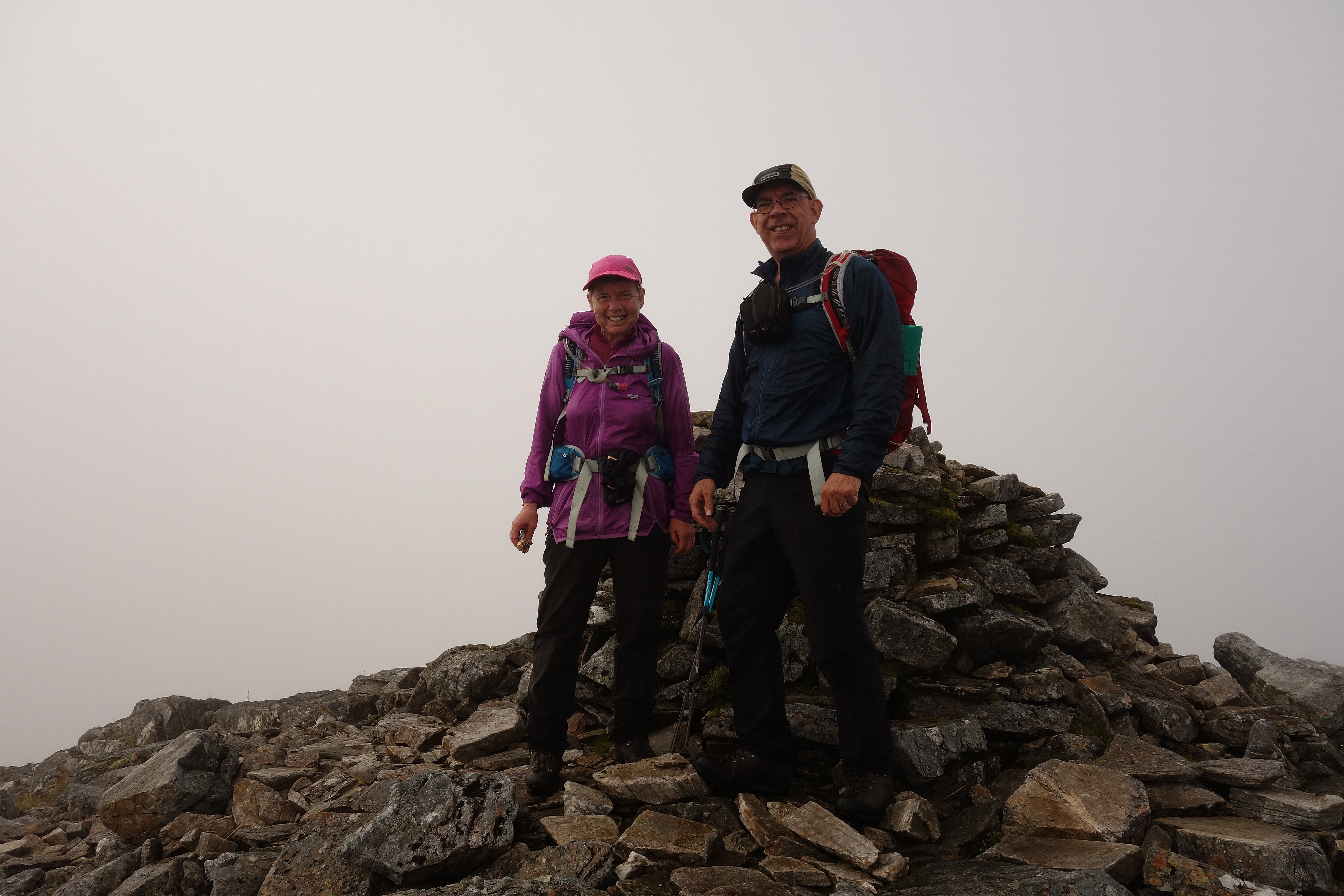 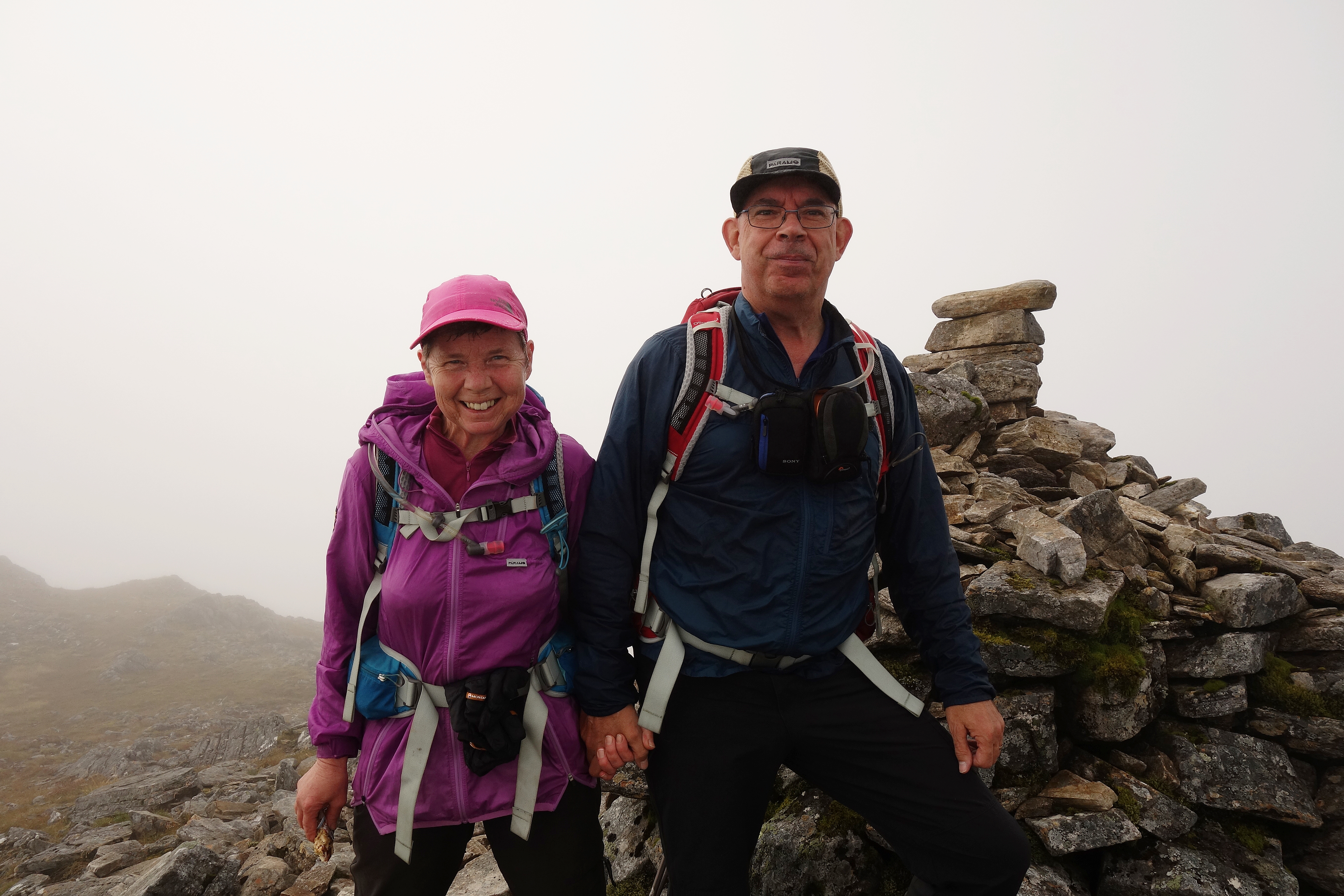 After a chat he set off down and soon disappeared into the mist, that was the last we saw of him, he had decided to do the same as us and not bother doing the longer route.

We set off down making sure we were on the the path, once on our way the descent was easy enough, I'd made a few mental notes of things we passed on the way up but the path was plain enough so I started to relax.

We emerged from the mist at around 600m so the cloud level had lowered slightly, the cloud on Gairich was even lower which was a pity because that was our target for Tuesday and I wanted to have a good look at it.

We met this little fella, is it a Butterpiller or a Mothapiller? 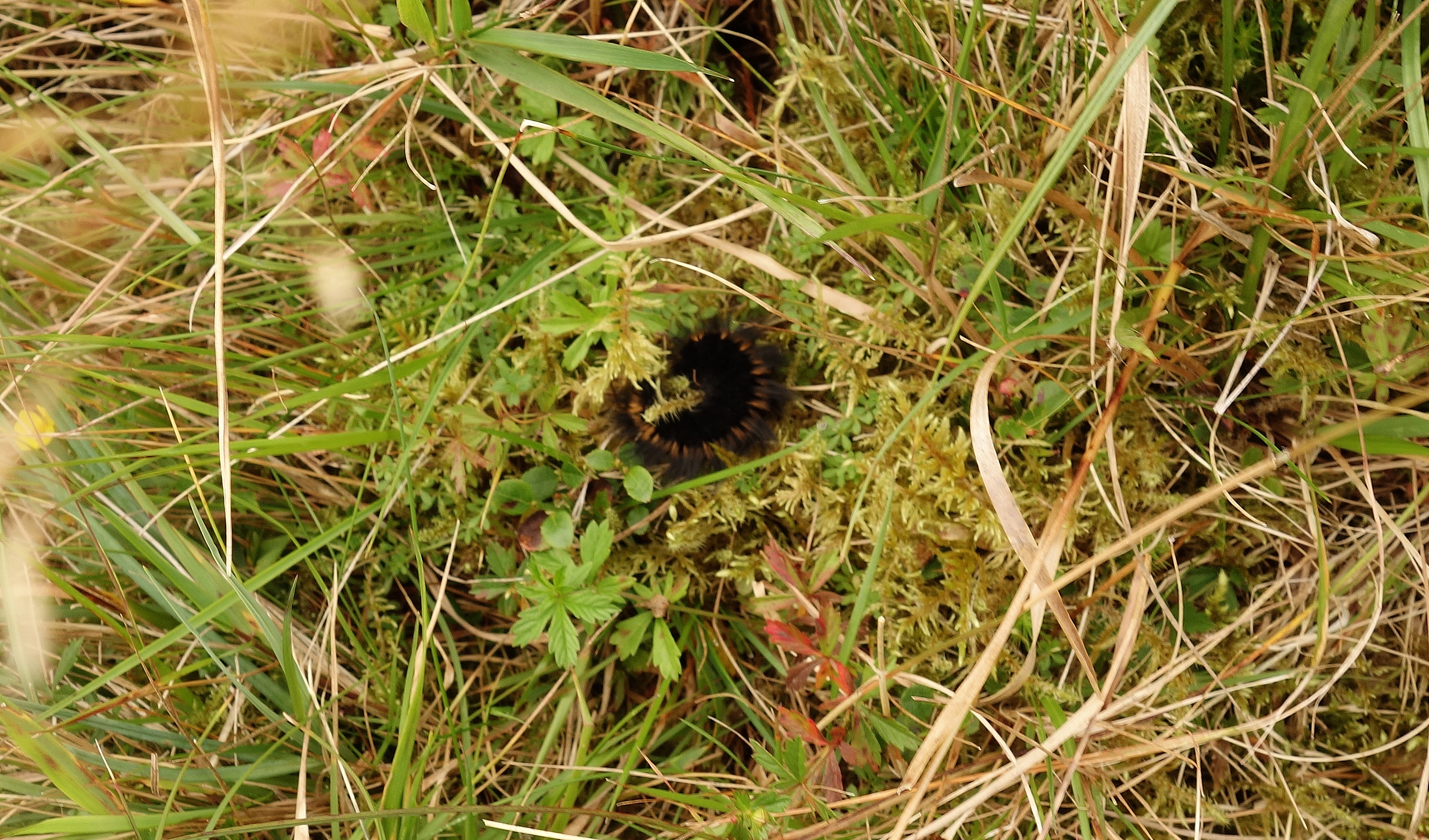 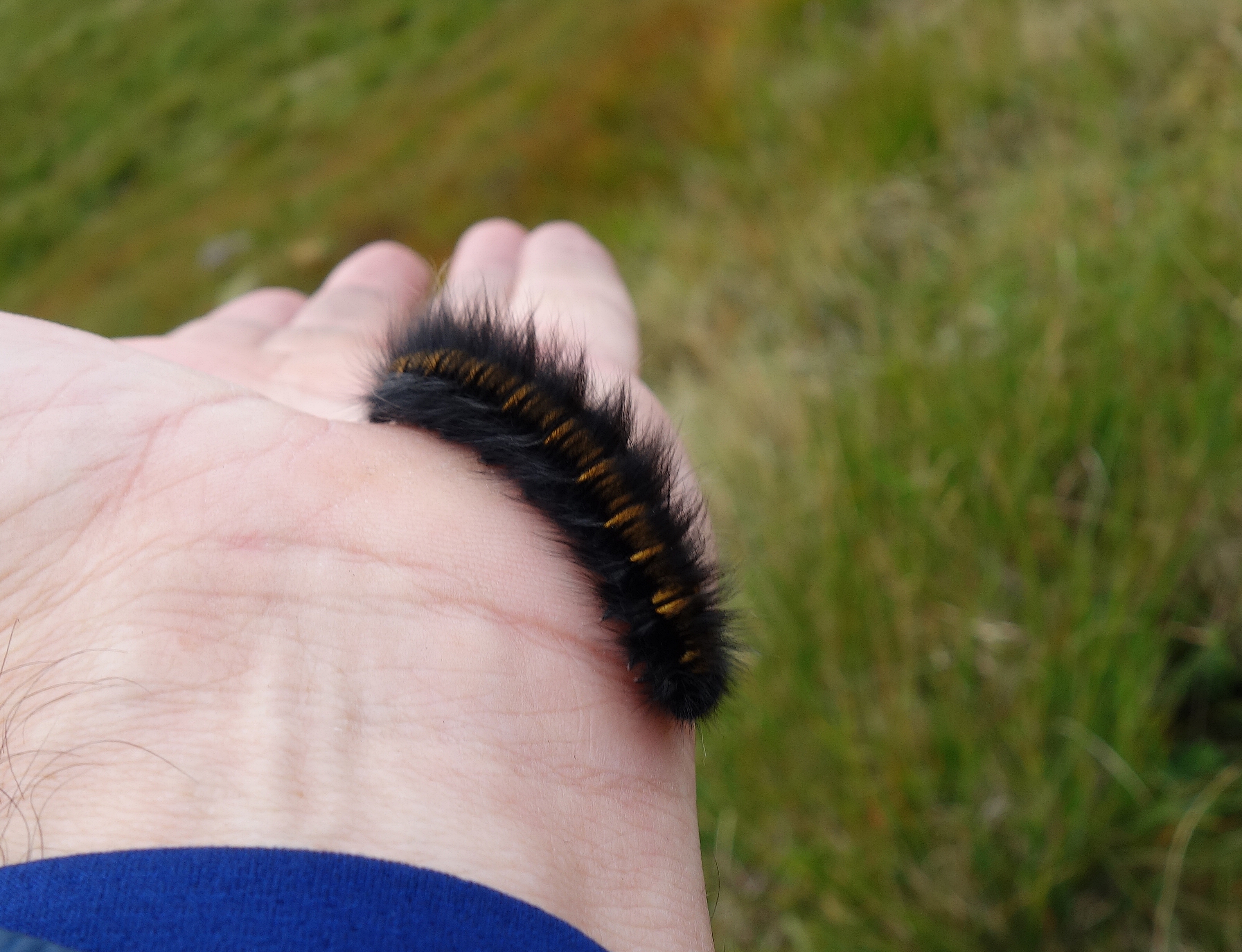 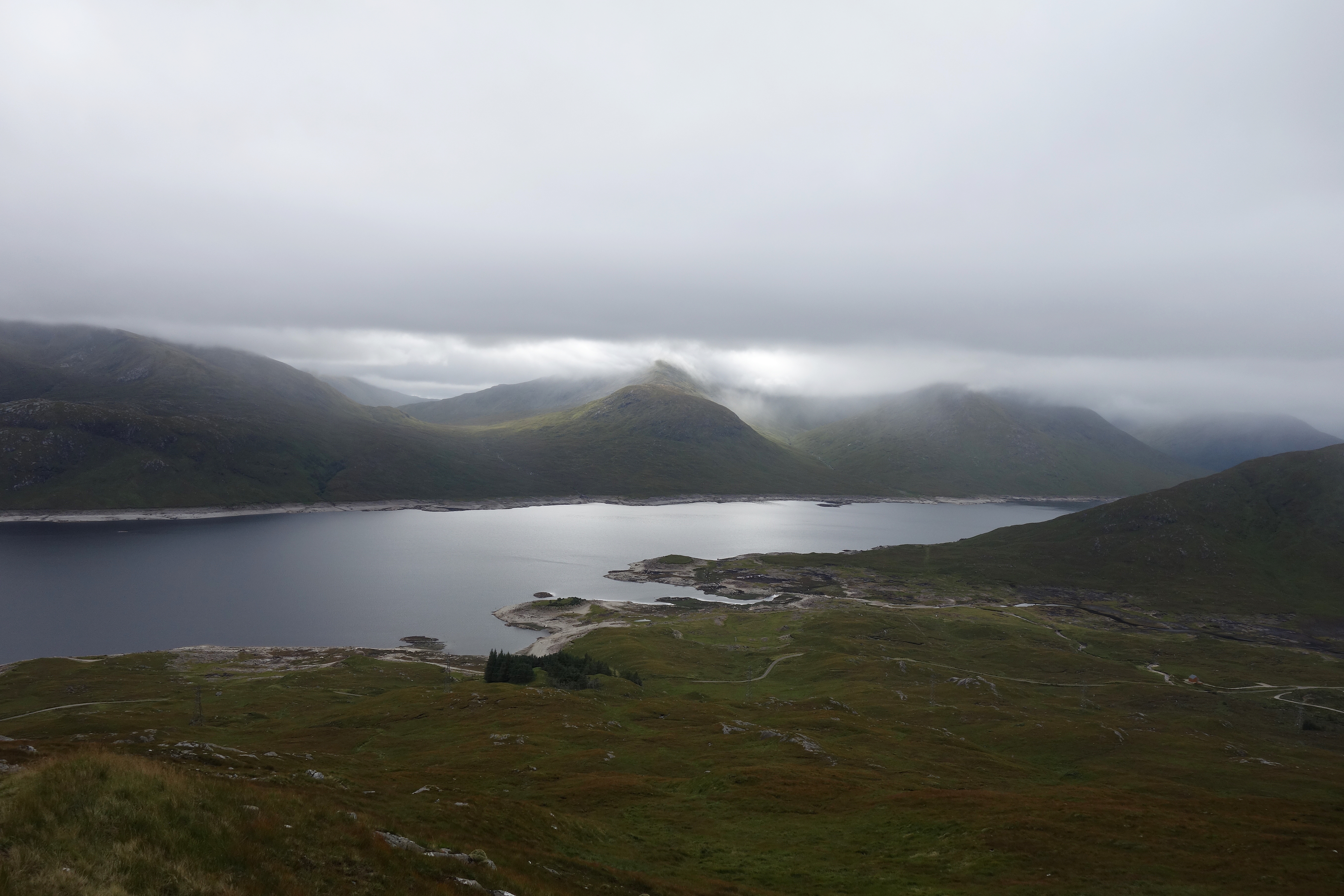 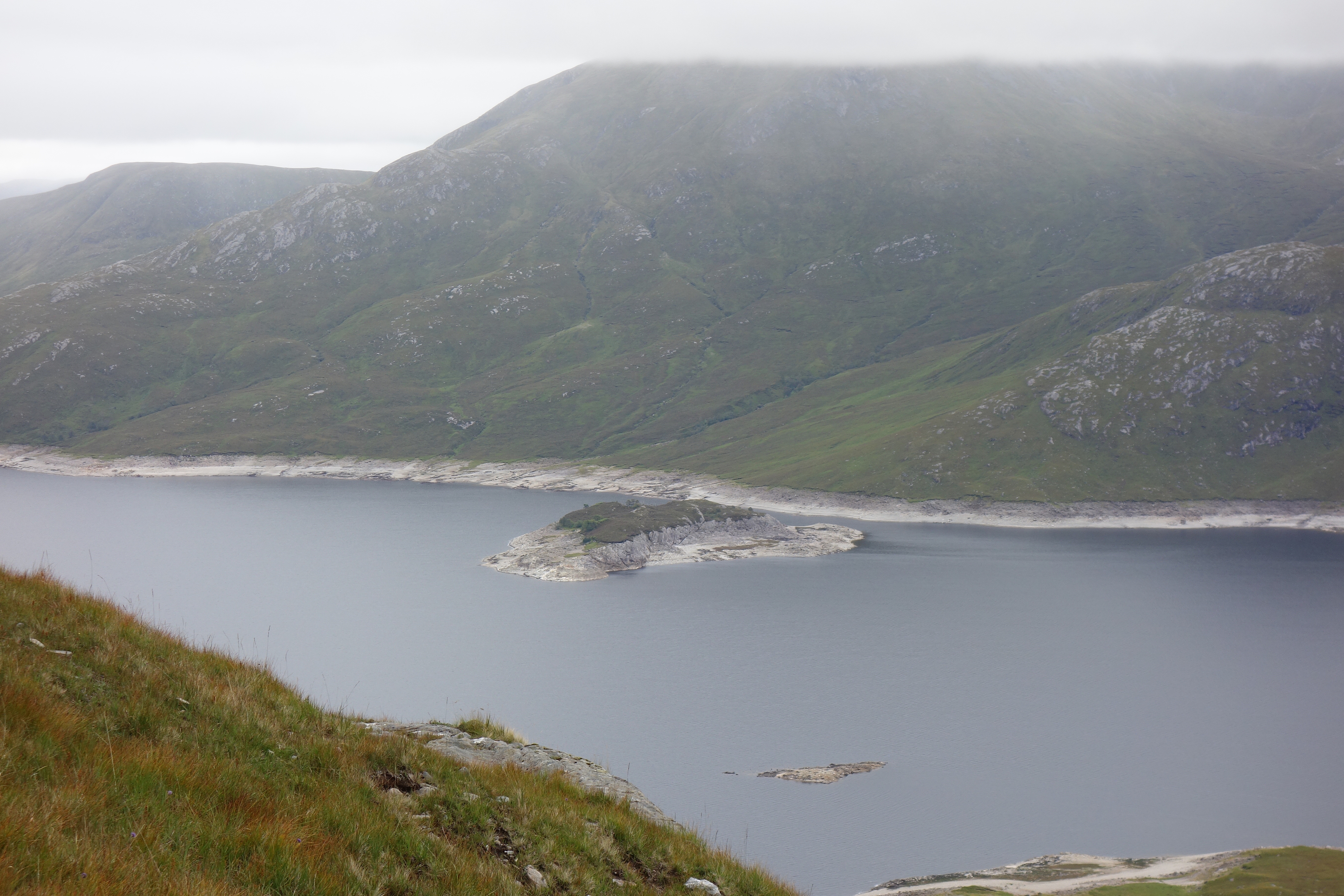 Back at the layby the other two cars had gone so ours was all on its lonesome.

We had a good day out, we stayed dry which was the main thing, it was a shame Denise didn't get any views but she was happy to achieve her goal.
We both wanted to get to 200 Munros, for us it's an achievement because it was a little goal we set ourselves about four years ago when I was on 50 and she was on 41, the way we look at it now is from now on every new one is a bonus and maybe, just maybe, we might finish them

or it may help us to be a bit more varied for our hill days ie Corbetts and Grahams, no pressure then

Pity about the weather but congratulations to Denise on #200

martin.h wrote: from now on every new one is a bonus and maybe, just maybe, we might finish them

Plenty of good hills that aren’t Munro’s. It’s not all about size (apparently

rockhopper wrote:Pity about the weather but congratulations to Denise on #200

martin.h wrote: from now on every new one is a bonus and maybe, just maybe, we might finish them

Hi rockhopper,
Our next aim is to get Denise on an even keel with me, she's three around Glen Coe, two of which are on the
Aonach Eagach

the others are B M Assynt and Conival which, from memory in my far distant past, are real crackers, I'm quite looking forward to those

Jaxter wrote:Nothing like a bit of cloud to make a nice atmospheric walk

Plenty of good hills that aren’t Munro’s. It’s not all about size (apparently

Hi Jackie,
I don't mind cloudy walks to be honest, I guess it's the heightened state of concentration needed that subdues real relaxation, I'm always a bit wary.
We're up to Roybridge again in October, I'm thinking of Corbetts and Grahams for a change, in 2020 we're thinking a reasonable mix, we'd like to go for the remote Munros tho', ie Fisherfield and Knoydart, I don't think I'd be too happy in the mist though