Two half-day walks to Hewitts in the far north Pennines.

Cold Fell is the remotest of all, just a few miles south of Hadrian's Wall and – right on the edge of the high ground – well-named even in August.

cold_fell.gpx Open full screen  NB: Walkhighlands is not responsible for the accuracy of gpx files in users posts
This was a decent short circuit from the nature reserve parking to the north. There are a couple of miles of upper slopes that are probably never anything but bleak and boggy, but the valleys are pretty and the lower paths good and clear. The direct(ish) way up starts on a road, then a stoned miner's track, fading into vehicle tracks and then marshy nothing. But it only takes the most basic compass work and a bit of determination (careful forecast-study didn't avoid a thorough stormy soaking and a howling southwesterly) to bump into the ridge-fence and follow that up the final slopes. The summit had a daunting cairn, but sadly views only of rainclouds… Tindale from the ascent Last of the ascent 'track' The westerly return is slightly better going, rushy (and now very wet) grass but a clear enough route down to the secluded valley of Gairs. And then there's a very good terrace route (an old tramway) curving around the occasionally puddly lower slopes back. Valley of How Gill The old tramway to Tindale Much more summery later, and up to Grey Nag on the first of what might be several straight up/downs to North Pennine peaks, and one of the longest.

grey_nag.gpx Open full screen  NB: Walkhighlands is not responsible for the accuracy of gpx files in users posts
A very short stretch of Pennine Way heads up from the roadside through some nice woodland into cluttered pastures. The short track to open country from there isn't a right-of-way, but it seems well-trodden and tolerated, through an unlocked gate obstructed only by a herd of cattle into 'legitimate' terrain. From there to the top, nothing really resembles a path or anything ever previously trodden. The summit is always in sight on a clear day but the route to the plausible fence crossings (generally near corners, plus a gate at the height of the vague Black Hill ridge) is guesswork. It isn't truly boggy, bar a few challenging hags towards the top, but it's very tough-going – high strides through tall rough vegetation, uphill and straight into a fierce wind. It seemed a lot longer than 2.5 miles… 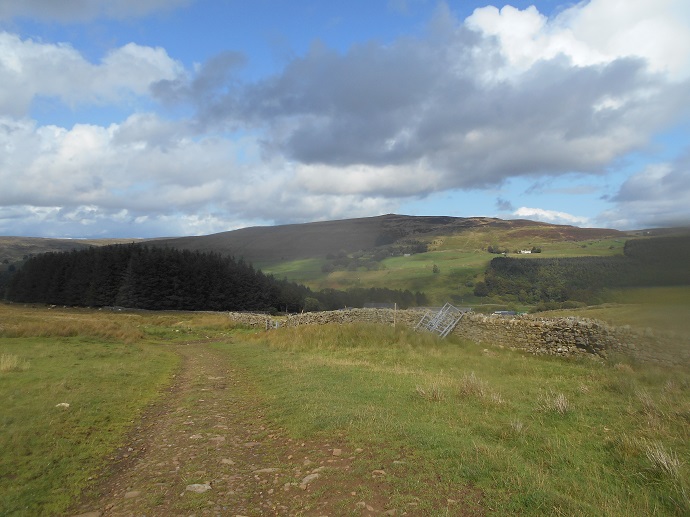 Tarn Rigg from the Pennine Way 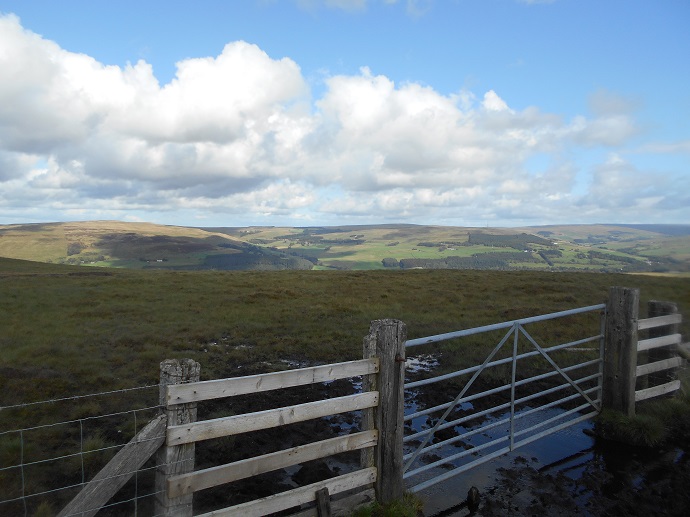 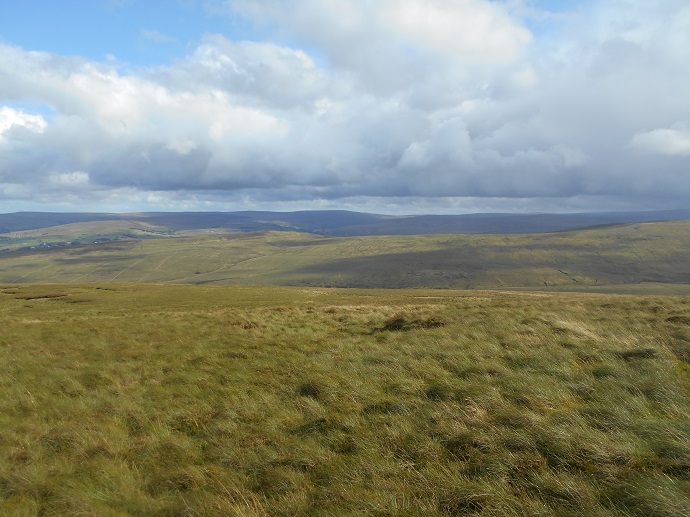 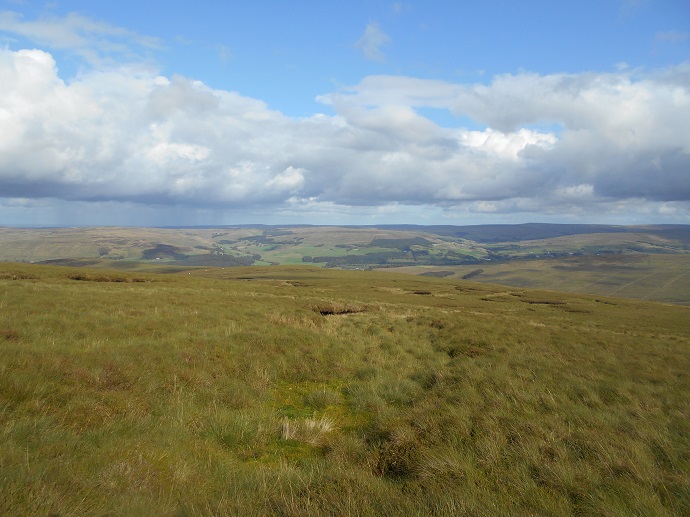 The summit after that is a surprise; sudden firm pastures, enough to support a network of well-built drystone walls, and a fine viewpoint. 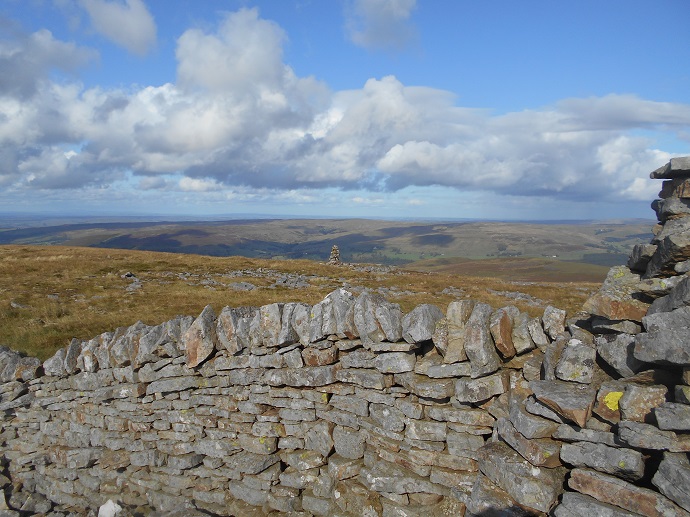 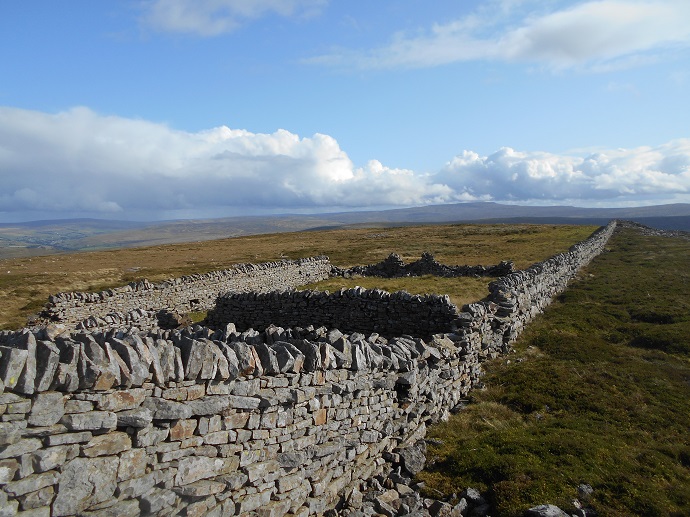 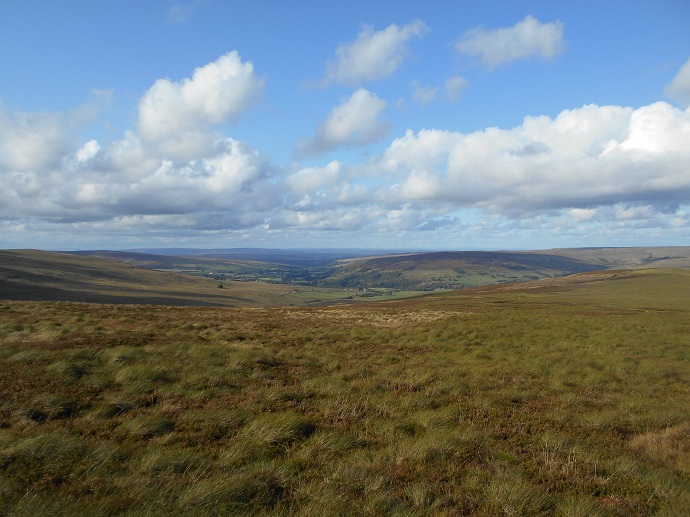 Going back down (something like) the same way it's still rough, wet and vague, but a lot quicker and easier that way...