It was the day 5 of our trip to cairngorms and monadliath mts.
After 4 pretty intense days of hillwalking and skiing I needed some rest therefore I went hillwalking again lol but this time I chose meall a'bhuachaille, as the hill is easy, with good paths/tracks and not too long, which is good as me and my partner go willwalking regularly but 2 other guys who joined us definitely don’t. besides they never hiked in winter conditions and I wasn’t sure what conditions exactly to expect, especially how much snow (I knew to expect some wind as cairngorms in general are windy mountains). I've been to meall a'bhuachaille last spring, remember it as a nice walk with great views (see my report here….. ) so we left the car in glenmore and took 'lower' track which passes reindeer centre and glemnore lodge. Quite a lot of snow there, nice and white, almost clear blue sky. We had a wee break at an lochan uaine which was completely frozen. From that point the path became very icy, I believe there were plenty of water sources along as the path was totally covered in sheer ice (we walked on the edge of it, on heather bushes). After few minutes we reached ryvoan bothy. Of course we went in - that was a nice surprise comparing to what I've seen inside last year . Bothy was nice and clean, with visitors log book and even some food left on the table- anyone fancies garlic stuffed green olives?

two sips of tea and hop -hop up to meall a'bhuachaille. Path was covered in fairly deep snow but it was easy to walk as there was plenty of footprints and ready-made steps which, of course, we used. Some parts of ascent were just frozen snow, that was a hard surface and easy to walk. As the path disappeaerd under the snow further up, we just took direction to the summit and walked across.. whatever was there under the snow

summit (what a surprise) was a such a windy place that my companions just hid behind the huge cairn (thanks goodness for that shelter!) and I took some pics around.
The views were great; to bynack more (that mountain was really tempting me to walk it, but I had no more days left in cairngorms, it was my last one, definitely will put it for a 'to do summer 2011' list ), cairngorm, braeriach, sgoa gaoith, monadliath mts. We even managed to see a'chailleach which we walked few days before.

Anyway, descent from the mountain was easy, we decided not to go to creagan gorm. Just when we were half way down the hill, we heared terrible noise, I jumped scared lol and it was bloody f-16 flying just over us, so low that I actually expected to see it crush into the mountain at once. After all, it flew over us 4 times.. maybe it waere four f-16s.. (jeeezzzz, what a noise!) and dissapeared. We continued descent and soon reached the tree line and were back to glenmore within 40 mins. 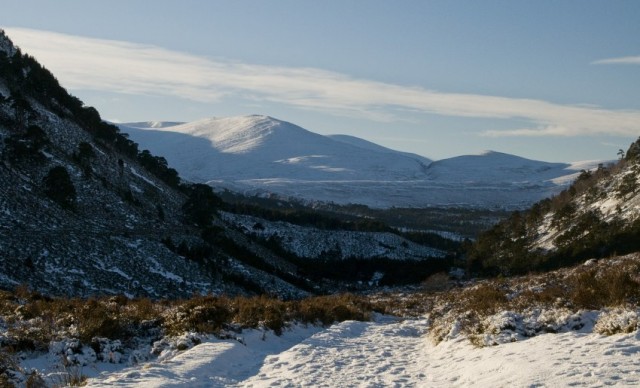 I planned to do this during a week spent in Aviemore last summer, but had to change my plans at the last minute - hope to visit sometime this year. Great to see them in winter.

Love the sun-burst pics and the Narnia like forest track.

Take it these were from today?

Wish I'd skived off work now

That's it....I've had enough of these reports form today. I resign. Bet your boots, if I get out this weekend all the good weather will have gone !