I was driven toward Glen Etive by the spectre of no fewer than seven—SEVEN—hydro plans that have been approved by Highland Council; construction on which may be starting in early 2020, in spite of some rather important logistical and engineering issues apparently having been not yet considered or solved, if I’m to believe what I’ve read. The prospect of this glen looking like Glen Affric has for the past umpteen years is beyond disheartening.

I read quite a few reports for all of the Corbetts that are usually accessed from the glen; I picked this one because it seemed like it might be the most straightforward, the shortest, and possibly the least steep. I admit that the others—Stob Dubh, Beinn Mhic Chasgaig, and Beinn Trilleachan—all sound quite intimidating to me. 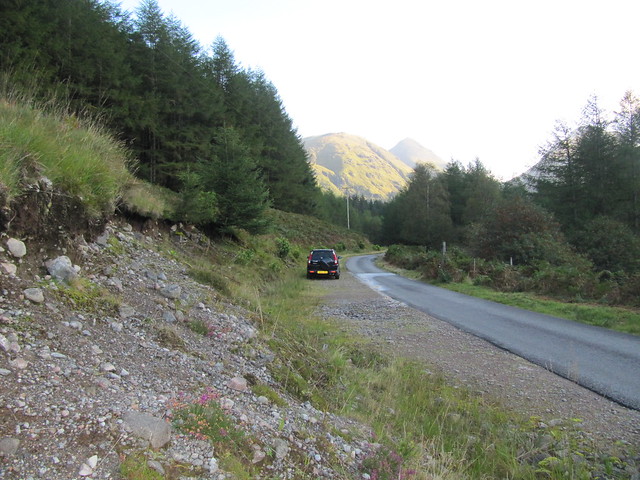 where I parked ("gravelly layby") 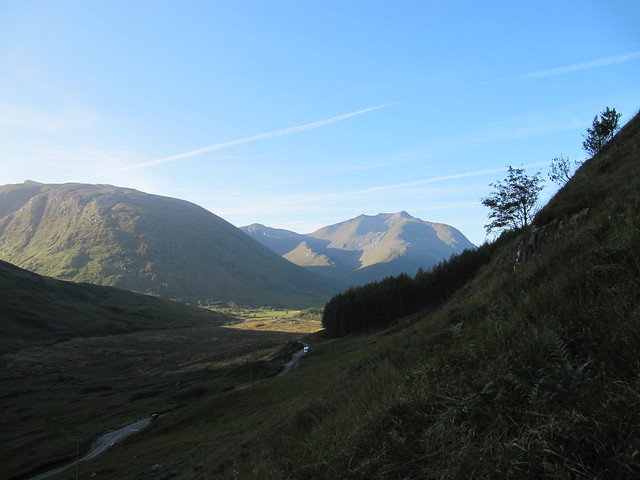 Ben Starav stunning in the sunshine, even from low level

So the WH desc is pretty bang on the money. It’s relentlessly steep from the onset. There are bits and pieces of path, but various options meander all over the place, and when I’d wandered a bit off-piste, looking for easier ground, I then found myself swimming through chest-high bracken that hasn’t yet died off enough. 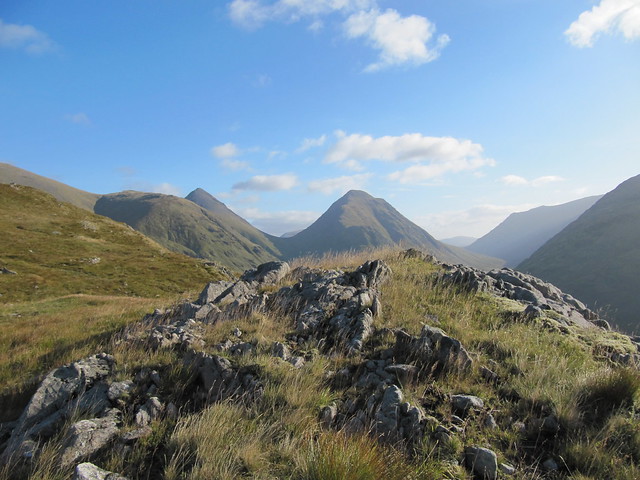 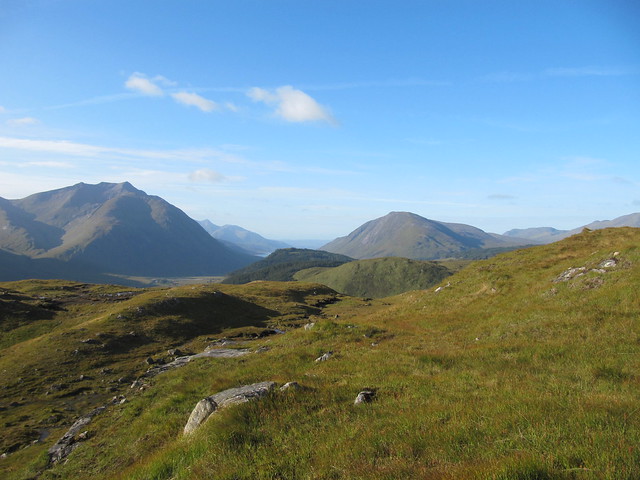 Starav, Trilleachan, Loch Etive just starting to get in on the act 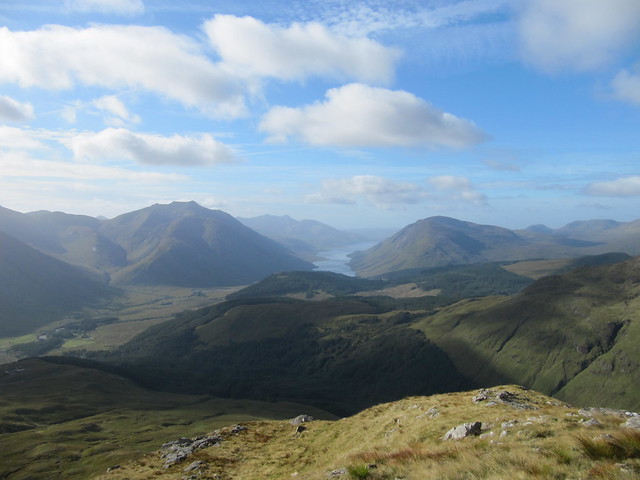 fab, fab, fab! (Cruachan the pointy one behind Starav) 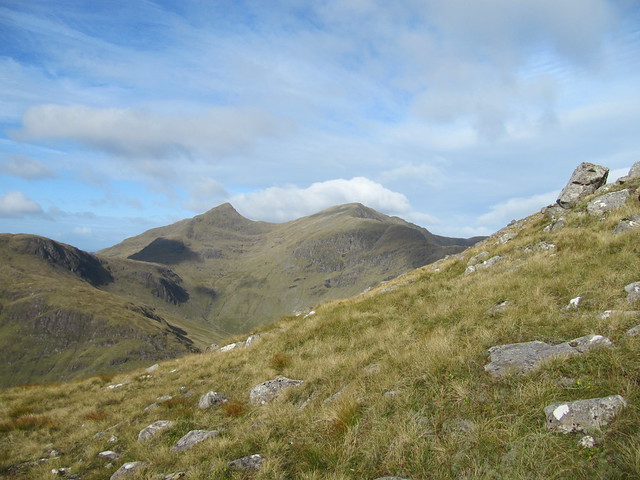 There’s very little respite from the “up” until you reach the 848m point and finally set eyes on the summit. Lucky for me, it was a brilliant morning, and the ever-opening up views kept me highly entertained. Nonetheless, my progress was quite slow, which is never a surprise. 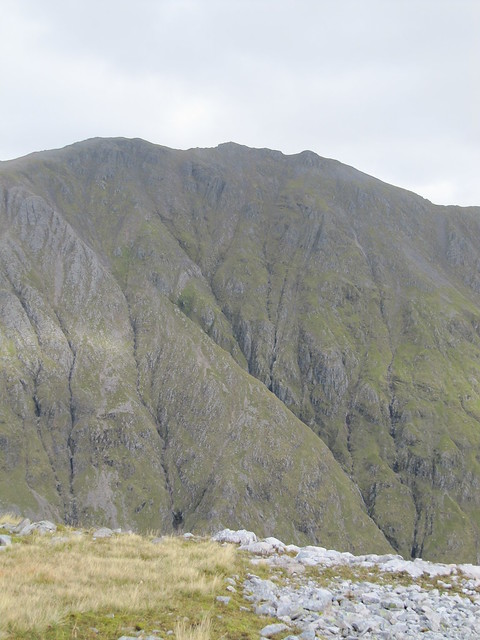 the mighty massive bulk of Bidean

It was mighty cold at the summit, the sparkling morning having gone cloudy and dull. After paying due homage to the bulk of Bidean casting its wide shadow, and taking a few (more) photos, I headed down to find a sheltered spot behind a rock where I could have a bite to eat. 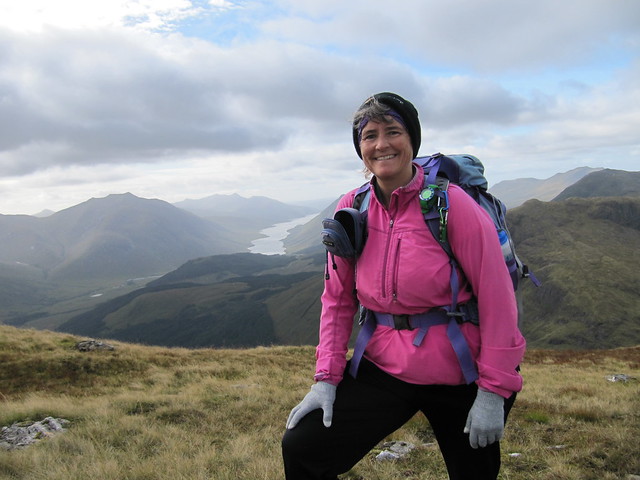 where's me sunshine gone to? 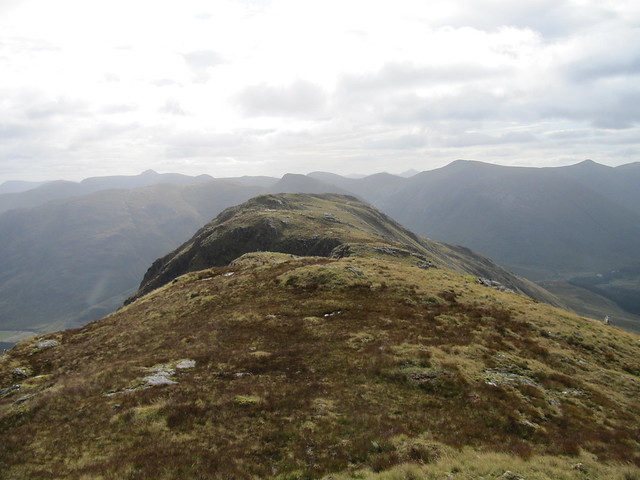 the broad ridge leading to (and from) the summit 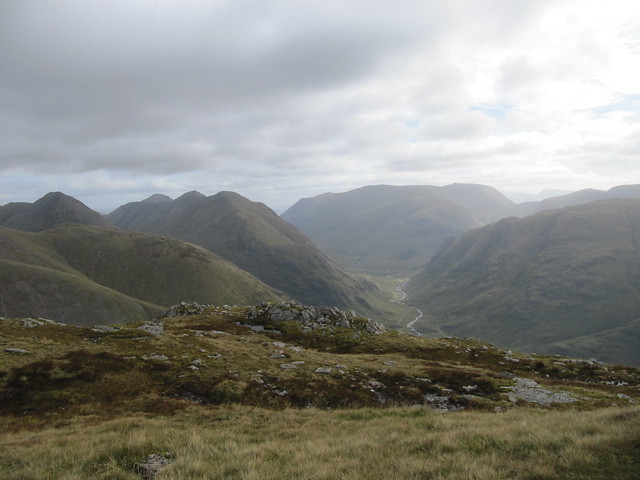 looking back up the glen toward the Buachailles, which look very different from this angle 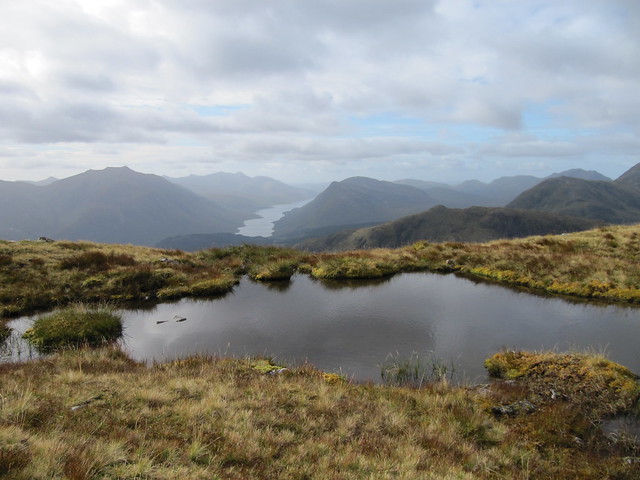 My descent was uneventful…well, except for seeing three men well below me who were ascending toward me…carrying shotguns….whoops! In my defense, I had tried to find stalking information, and the WH site said that current information for the estate would be posted at various access points. I saw none, but in retrospect, I realized that the hill I was climbing is probably not considered a particularly popular access point, and that I probably should have called the estate as well. I made my way down to them, and said that I’d hoped I’d not bunged up their activity. They said it was ok, and asked me if I’d stayed to the ridge (which I had), but the response was gruff, and I got the feeling they weren’t best pleased (with me).

Today's walk didn’t even bring me to my (self-imposed) daily minimum of 15K steps! I’m sure that none of them probably counted as aerobic, either (“aerobic” counting kicks in when quick steps are sustained for a period of time). Nonetheless, I took comfort in knowing that the 14,600-some-odd steps I did take required some effort!

It was a slow and patience-testing homeward journey. I met at least 25 cars on my drive back up the glen to the main road. And as per usual, in this location particularly, most of them seemed unfamiliar with the rules and courtesy guidelines for driving single-track roads. I’m a bit dismayed by how much traffic there’s been on my recent forays—even mid-week, and outwith the school holidays.