Along the Ettrick ridge

Along the Ettrick ridge


There wasn't much rest about my Sunday - I'd walked something like 15 miles in from Selkirk on Friday, and much the same round and about on Saturday, but I had at least 20 miles to go to Moffat - therefore 7.30 breakfast, and an almost successful attempt to be on the road before 9.

I did keep trying to convince myself the night before that it would be easier just to slink out Innerleithen, because the previous day had been pretty hard on my legs - but by the time I went round the hills I'd missed out it really wouldn't be, plus it was more than three years since I'd been in the hills around Moffat and I was missing them.

I started by heading along the valley to Ettrick village, which is at the start of a long dead end road - seven miles to Potburn - while the main branch of the road turns south for Eskdalemuir and Langholm - it keeps surprising me on the map that this joins up. Ettrick has, inevitably, a monument to James Hogg, known as the Ettrick shepherd - it's a fairly awful Victorian thing, put up in 1898, long after his death, but I do like the sheep on the corners, which have been carved by someone who has actually met some sheep, rather than someone with an artist's idea of what a sheep should look like. I also went up to find the church, which is mysteriously signposted not as a church, but as a route to St Mary's Loch - I only realised after I had come back out to the road that I could perfectly well have gone up that way, but I quite liked the idea of having eventually walked the whole Ettrick valley road, between the walk in from Selkirk, and today's walk, and some future outing on the SUW.

So I kept on along the road until I met the sign where the SUW turns off, coming from the other direction, and followed it, theoretically away from Moffat - a bit of an uphill toil at first, but before long a very pleasant walk through a narrow valley. 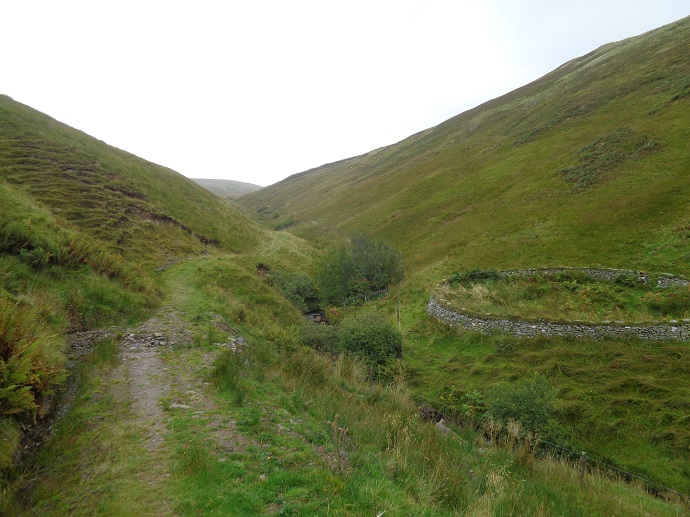 SUW in the valley

I hadn't been sure just how I would get from the SUW to the ridge - if the most direct way would be too steep, or the easier way too vague - but it turned out to be easy, just following the fence up from the watershed. The top of Peniestone Knowe was briefly baffling - the only obvious link is to East Muchra Hill, which leads towards the most definite hills in view - only those are the big hills around Loch Skeen, on the other side of the road. Heading for the ridge which begins at Herman's Law means a definite turning away, and a kind of trudge of faith until the link becomes clear.

Having found the ridge, though, it's impossible to lose the route again - it's not just a case of following the high ground, although that works, but of following a very faithful fence all the way along. This was far more the kind of ground I expected from the borders - tufts of grass, and very wet places to squelch through or avoid, but (except maybe the worst of the bog) things that you walked over, rather than through.

The ridge itself was completely unexciting at this end, but the view behind opened out satisfyingly until it was possible to look right down the Loch of the Lowes to St Mary's Loch. 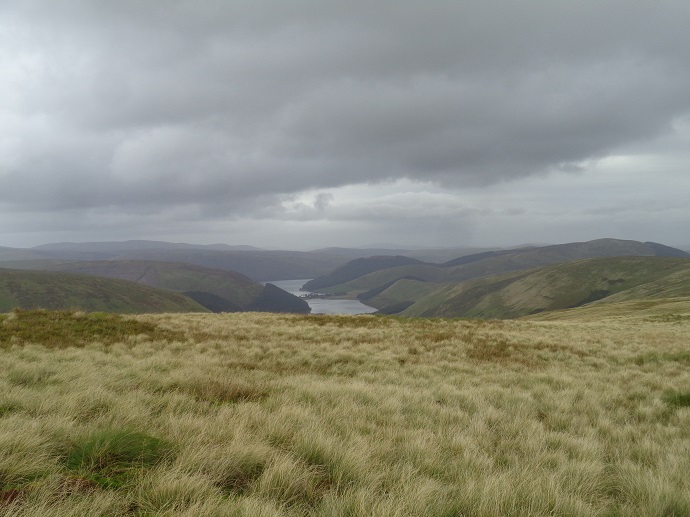 The top of Herman Law is only marked by the fence junction, which is about as good a high point as any on the little flat top. The first hollow was fairly typical of the first stretch - peat hags, but nothing you could vanish into. On the rising ground on the other side there was something odder, a bit like the opposite of a peat hag - ordinary ground all around, and an odd rise left behind, rather than worn away. The little in between top of Trowgrain Middle has the first of a series of impressive cairns - another was already in view in the angle of the climb up Mid Rig beyond. A little green pool on the flatter ground higher up pushed me to the other side of the fence, but although there was really a better path there, I kept worrying that Loch Skeen would open out from between its shrouding slopes and be hidden from me by the curve of my own hill. The wrong side of the fence

When I crossed back at the next corner it was still hidden - it was a few minutes later when it started to come into view. A glimpse of Loch Skeen

Andrewhinney Hill is the highest point on the ridge, and one of the most satisfying - not a peak, but at least a definite high point, with a large but ordinary cairn, making a good spot for lunch. I'd decided that there was no chance of making Moffat for dinner - there never had been much - which relieved me of rushing, and meant I could have a decent rest here. And the views are better than they'd been so far, as the ridge beyond takes on some more interesting shapes leading along towards Bodesbeck Law, and the view ahead on the other side of the further valley rises to Ettrick Pen - but the best view is straight across the valley below, to Loch Skeen now in view among its sheltering hills, and a glimpse of waterfall. Bell Craig isn't much further on, quite a drop but not much of a climb, and the rest of the ridge taking on new shapes ahead The second half of the ridge

It's another top marked by a fence junction, having used up all its cairns lower on the slopes. I thought that the fence had abandoned me and headed off for the valley, but it turned out to be only going round a corner which the path cut, and they joined up again before long. From the north Bell Craig is just another dull curve, but looking back from the north there's far more shape to it, and it's easier to see where the craig bit comes in. Looking back to Bell Craig

There were two more bumps to cross, and the head of a forested side valley, and then a depressingly long climb to Bodesbeck Law - I'd started out thinking of this as the lower end of the ridge, without taking in the extra ups and downs. But one cheering thing was a change from faithful fence to truly impressive stone wall, winding its way up to the summit in a way reminiscent of grander walls elsewhere. The views to the other side of the valley, with its pointier hills, were good, and the forest down below stopped looking like a black mass blocking the way and began to look more as if it had come into the valley for shelter. Forest in a bowl

But it was a relief to finally come in reach of the last summit, the one true little top of the ridge and about the only one which the fence didn't cross, perched up above the old wall and new fence, which seemed to have been slightly battered by people crossing it. The summit has another hilltop cairn, not the tall markers of earlier on. From here, the slope and the fence fall quite quickly to a kind of messy crossroads at the edge of forestry plantation - decent path at first, but the bottom seemed to have had bits hacked out of it by some kind of machine. Descending to the track

At first the line of the track towards the road was almost impossible to see, although the track seems to come up clearly to the wall on the other side, then for a while it was wetter and probably worse to walk on than the ground around, but eventually it cleared itself up into a decent stone and grass track keeping on the level for a while, then dropping down over grass to pass through a gate and into a large rough field. I kept expecting cows to appear - they'd been about at some point - but the only ones visible were high on the hillside on the other side of the Bodesbeck Burn, and I made my way down until I could come through another gate into a proper field by the farm. It did occur to me that I might be coming into a cow field rather than out of one, but I had a fence to stick close to now, and although it turned out to be the case, the cow did nothing worse than look at me, and turn round to go on looking at me better.

The view from the road here is quite dramatic, almost more highland than lowland with the hills soaring for the sky. A highland view in the south

My timing wasn't bad, although as predicted I wasn't going to get any dinner in Moffat - it was just on quarter past 5, which meant I should reach Moffat 10 minutes before the 19:25 bus did without any particular rush, and that turned out to be the case, An attractive valley, with a village hall with no village, and very unexpected traffic lights at Craigieburn, and eventually the sun getting low over Queensbury, but it was starting to feel like a very long road by the end.
(Actually, although this is the major road, I don't think there's any village in the thirty-odd miles between Selkirk and Moffat, unlike the minor road which meanders through Ettrickbridge and Ettrick and Eskdalemuir...)

Moffat looks like a place I would really enjoy spending time in, and in three visits I've never yet done anything but rush through, but although there were several choices for dinner, waiting for the next bus two hours later would mean not getting home until midnight, and I preferred late dinner in Glasgow.

So not a completely successful weekend, but a good one - a trip right through one of the emptier and more elusive parts of the south.

Re: Along the Ettrick ridge

A great read, thank you

I’m headed this way at the weekend, albeit starting at Moffat and heading to these hills from there. Thanks for the photos, I love the view across to Loch Skeen.

Re: Along the Ettrick ridge

I hope it went well - you'd get a better view of Bell Craig going that way, definitely, and it might get easier - but maybe wetter - as you went along. I'll keep an eye out for your report!