I started by the Tongue war memorial and headed up the A386. It was a beautiful summer's morning, which is to say, midgeless. Maybe the little biters didn't like the clouds, which were somewhere around the 150m level.

A quad track led away from the road towards a small peak that loomed in the mist. That turned out to be one of several minor lumps on the side of Meall Leathad na Craoibhe, the real thing being open to visitors but closed for remote viewing.

Once up it was a nice bog-hop from top to top, with small detours for various lumps and crags in between. The clouds parted occasionally for a glimpse of what lay ahead. MnCR had a nice rocky top, with views of some nice (though not especially red) rocks. Loch Craisg from the shoulder of MnCR

The last and smallest top seemed especially pleasant, partly thanks to its shape and partly because the clouds were thinner. Down to Loch Craisg, surprising a lizard en route, I took a detour beside the loch and contemplated a shortcut through one of the crofts to the road. Instead I came over all English and headed for the Ben Tongue track. That took a bit longer, but I got to meet the more friendly of the two resident dogs on the track.

This was a nice walk, and would probably be even nicer without the mist.

MnCR.gpx Open full screen  NB: Walkhighlands is not responsible for the accuracy of gpx files in users posts This was a far cry from the previous walk. Now I had two accomplices, the sun was beating down and the road was thick with NC500ers. Parking at the layby west of Coldbackie, we were treated to the sight of a van stopping across the road from us. It was a treat because the driver - or, at least, the occupant of the front-right seat - was a skeleton, which waved at us before carrying on. The track starts near the other end of the village. Where did that cloud come from?

It was nice to see the hills I'd covered the week before, and to realise that I'd recently been through some of that spectacular landscape. So that's what MnCR looks like from a distance.

The track petered out somewhere behind the two hills, and we decided to make a detour to find the waterfall marked on the map. We managed to hear but not see a waterfall on one branch of the burn, but still it was worth the diversion to experience the quiet little wooded glen. Looks like a sheep track - no, let's be honest, it looks like a pixie track but was probably made by sheep - the trees were too low for us anyway. One side of this branch had been split off, the rest carried on growing 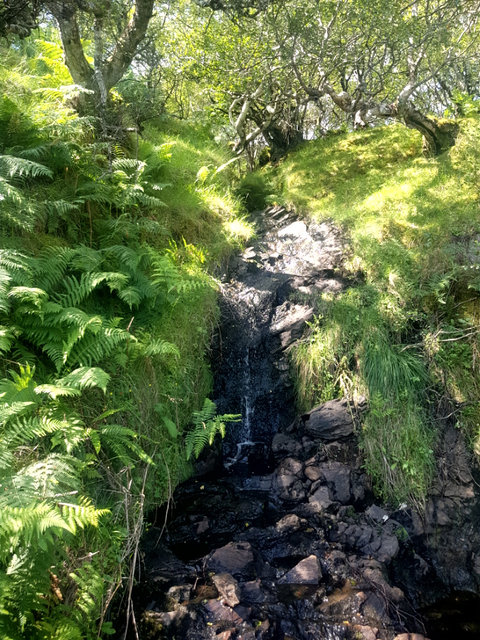 Not the one we were looking for but it's water, and it's falling. One of my companions was an energetic canine, so we avoided the sheep that were resting on the track up Ben Tongue. From there we went on to Cnoc an Fhreiceadain, the Watch Hill, and took some time to watch a few little white waves sliding into the Kyle of Tongue. I must have taken more pictures of the Kyle than anything else in the last couple of years. We took a shortcut down, getting a good view of the crags on the way. We avoided the crofts but stopped to admire the Tamworths. I could tell you a tale about pigs, but it's too early.


BenTongue.gpx Open full screen  NB: Walkhighlands is not responsible for the accuracy of gpx files in users posts