Me and you in Glendhu

Me and you in Glendhu


Last weekend, Kevin's luck was out again. The poor man keeps coming down with minor injuries which, though not severe enough to stop him from outdoor activities altogether, make climbing hills a bit too risky. I know maybe I'm being overprotective, but I don't want him to suffer on the hills, so instead of dragging him out to another rocky and steep slope, I suggested an easier walk to Glendhu bothy. It's a low level route on a good track, with views as good as they could be without climbing any significant top.
The inspiration came from litljortindan's report, many thanks for the idea

Track_GLENDHU 16 KM.gpx Open full screen  NB: Walkhighlands is not responsible for the accuracy of gpx files in users posts
The route starts from the car park in Kylestrome. When we arrived and got out of the car, we noticed a stalking party getting ready to drive off to do some shooting. They even had a bottle of whisky with them - an absolute necessity when stalking deer, I suppose

At least, the track along the loch is a right of way, so we knew that we wouldn't disturb the hunting procedures when doing our little ramble. Kevin was complaining a bit about his injury again, but I hoped that low level walking would do him no harm. And the day was so lovely that I couldn't miss a few hours spent lurking in the weird word of Assynt!

The first touch of autumn - a rowan tree with ripe berries. When I was a kid, I used to make necklaces out of them 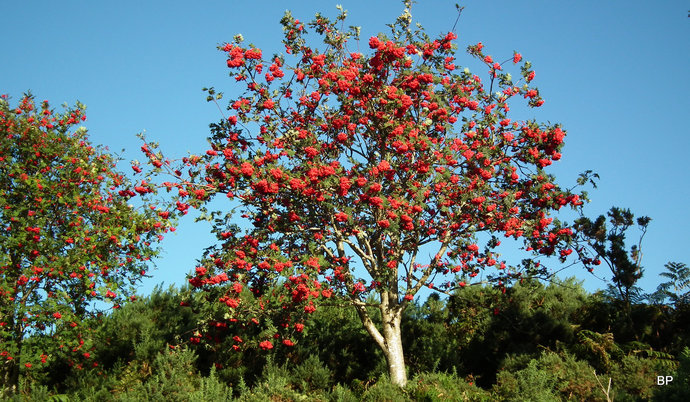 We took a short detour to the slipway, to take some photos of Kylesku Bridge and the western end of Loch Glendhu:

Looking south-east to Loch Glendhu/Glencoul, with the Stack of Glencoul on the horizon:

Quinag's less photographed side, seen across the water:

We returned to the main track, which soon lost its tarmac surface, but it was still easy going. I took far too many breaks to pick blackberries. After maybe 30 minutes, I was berry-stuffed, bramble-scratched and black-tongued

The scenery is truly beautiful, the track passing below some vertical cliffs: 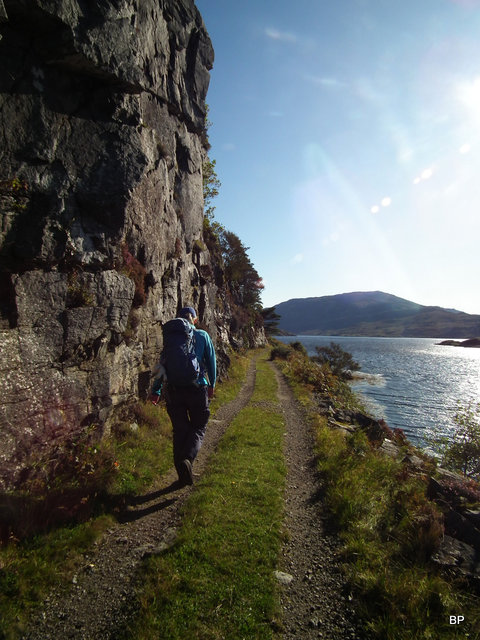 After about 3km of walking on the track, we reached the bridge over Maldie Burn, with a good vantage point to the nearby waterfalls: 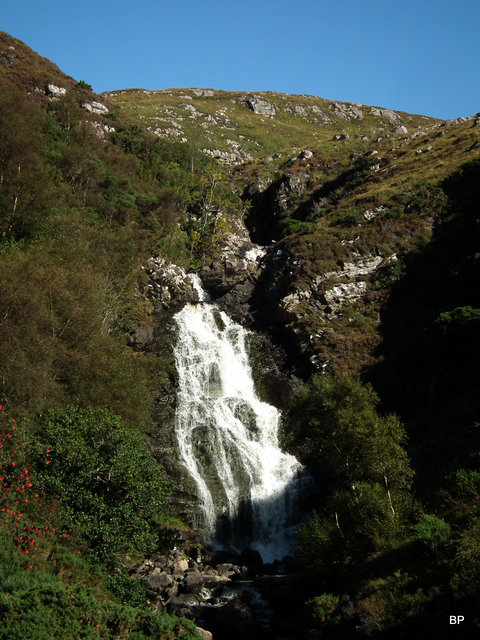 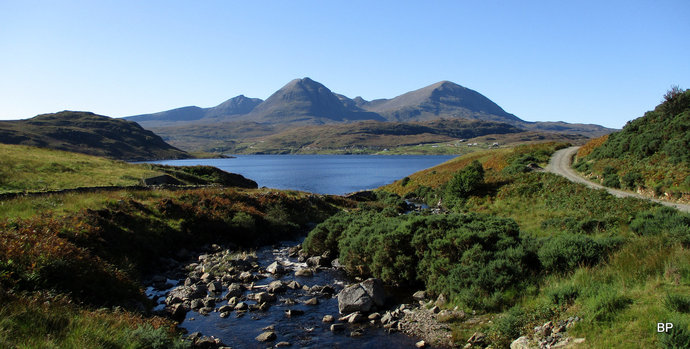 The track splits here, we took the bottom branch, continuing along the loch: 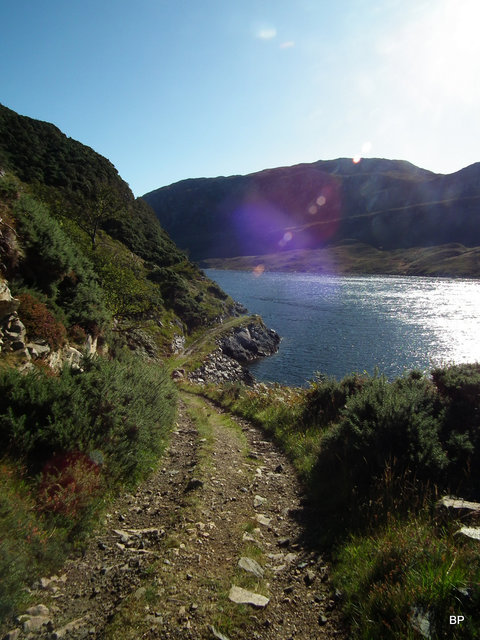 There are many good spots for photos along the way, especially to study the coastline:

The day was surprisingly hot as for late September, but quite windy. We didn't mind the wind as it cooled us nicely when we walked: 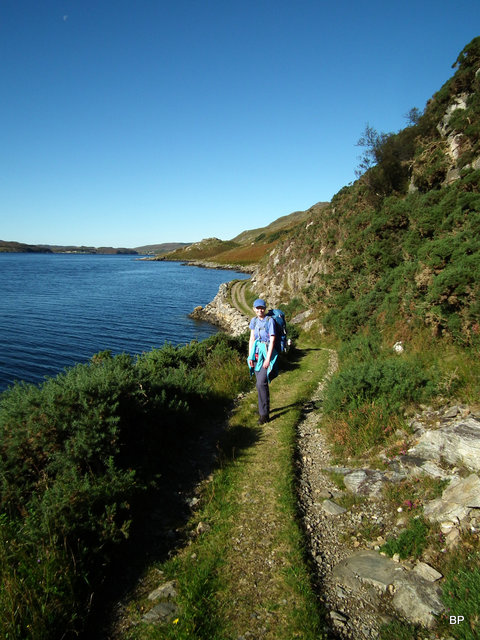 The track goes up and down over several small bumps (I was surprised to see over 400m of ascent on our GPS track - it didn't really feel that much!) but generally it's easy going: 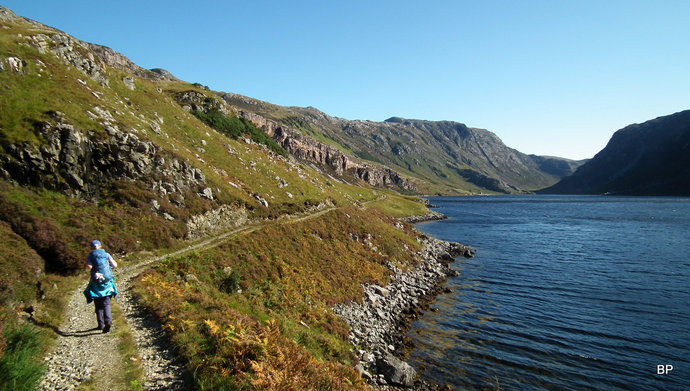 The vertical cliffs of Creag Ruadh:

Close up to the cliffs from below: 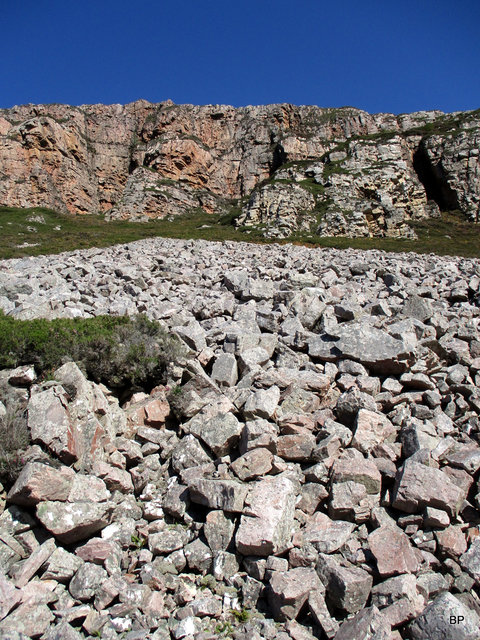 Kevin in a better mood now, his injury forgotten - at least temporarily: 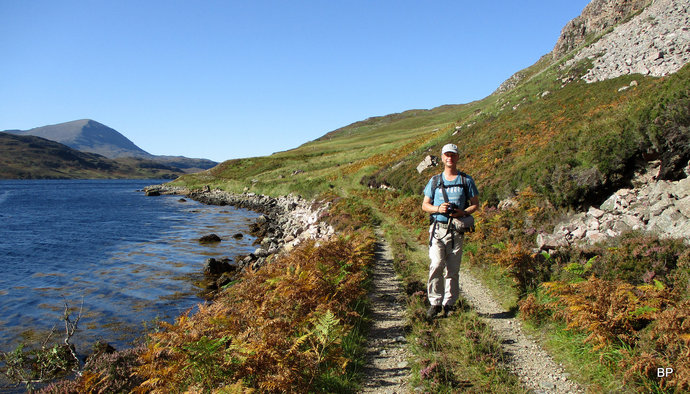 The track traverses below the Creag Ruadh wall: 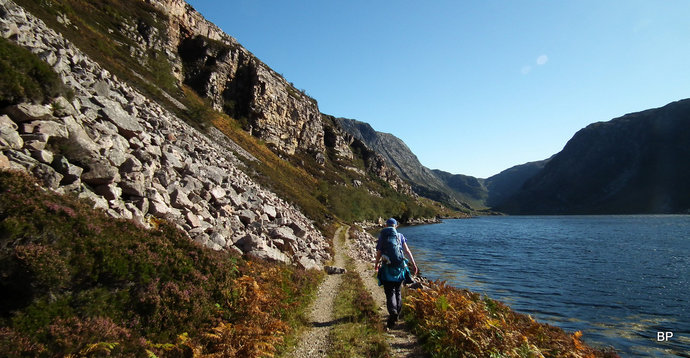 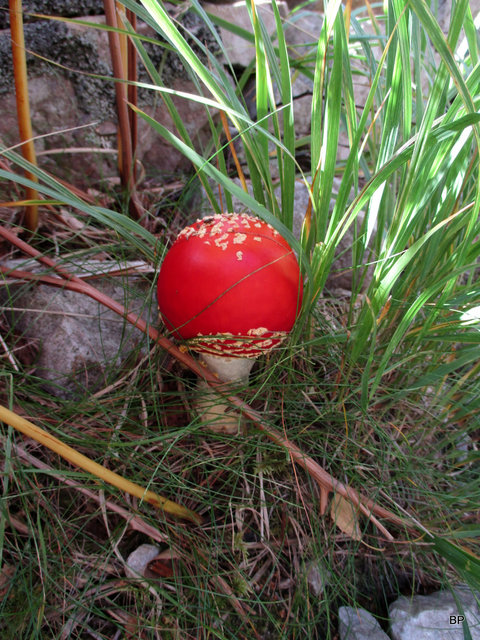 The sun was strong today so we were grateful for some shadow: 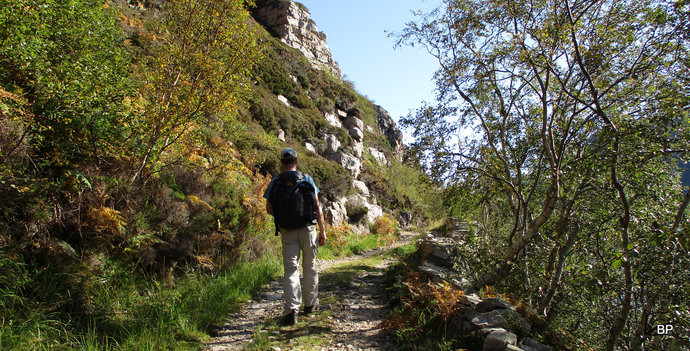 More cliffs above our heads: 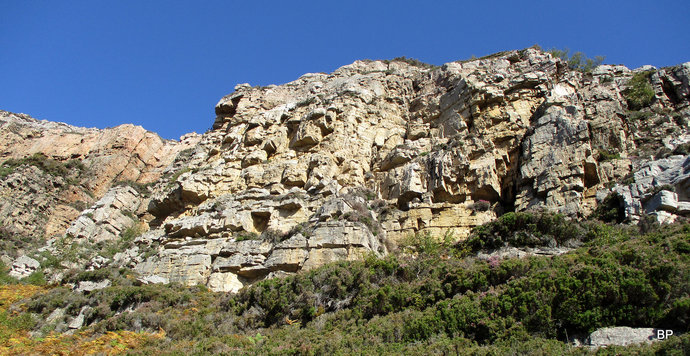 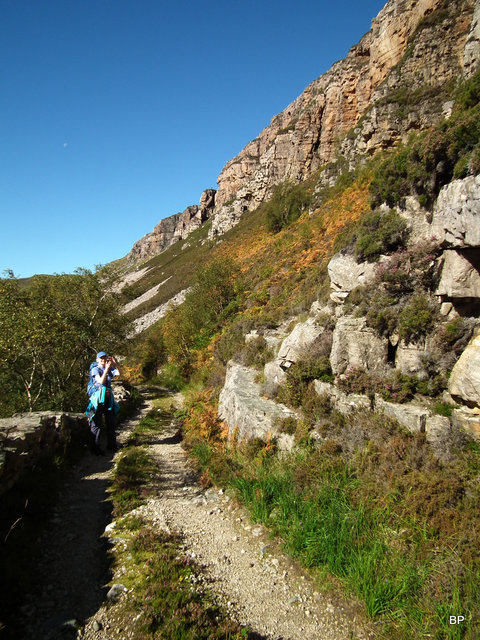 There was a red warning sign on the path saying "stalking in progress" so we didn't proceed any further. We descended to the sea shore next to the bothy and found a good set of rocks to sit and have a picnic. Even Lucy was invited 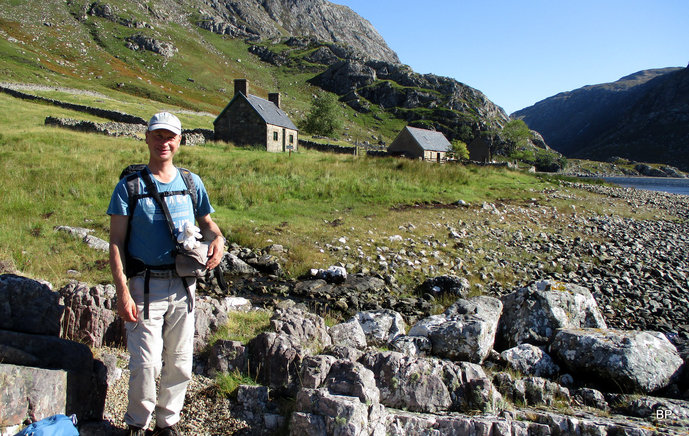 Looking west along the shore: 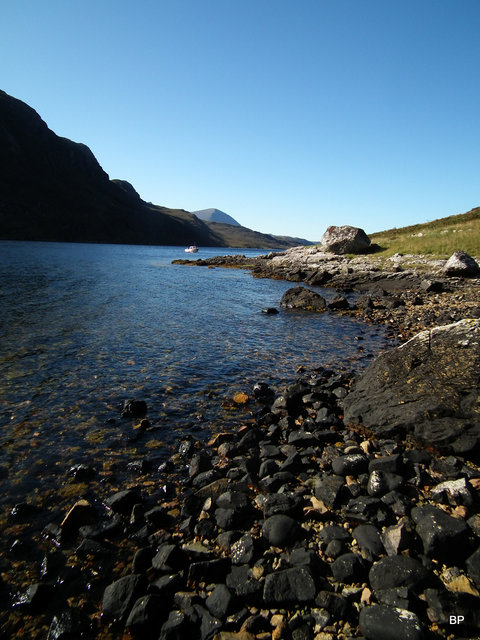 After lunch, it was time for siesta! 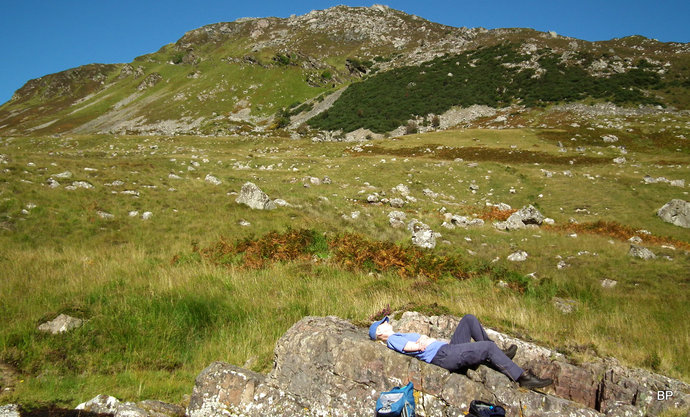 We spent nearly an hour lazying about, deciding it was too hot for any advanced lurking. I was intrigued by upper Gleann Dubh and would love to return here for more walking and investigating, the upper end of the glen looks very tempting! Eventually, it was time to go back: Posing with the Creag Ruadh cliffs: A couple of panos taken on the way back:

This is a simply stunning corner of Scotland, and I was pleasantly surprised by how many different views we saw, starting from the great pano of the northern side of Quinag, to the details of the Creag Ruadh cliffs and views acroos the windy waters of Loch Glendhu:

I can wholeheartedly recommend this fantastic low level adventure to anybody!
.....................
Hopefully, Kevin will be able to climb a hill this weekend - if so, we will return to Assynt, weather permitted

I once watched a TV programme and part of it focussed on the importance of this area both historically and geologically. We later took a boat trip up the loch to view the Eas a Chuil Alluin from below and could easily see the geological features mentioned in the TV programme.
https://www.geolsoc.org.uk/GeositesGlencoul

Need to get to Glendhu to match our trip to Glencoul last year.

I am always keen to read any blog from this stunning area but Kylesku and its surrounds in particular. We first visited Assynt in 2013, staying at a holiday house in Clachtoll. Since then I have been very keen to come back at anytime, just to cement the feeling of 'escape', I think. My wife and I did this walk a couple of years ago around Easter time. We were very fortunate with the weather, which was not unlike yours, as I recall. It really is a stunning place!

Very fortunate with the weather given the area. I stopped off at kylesku for some lunch and it has great views towards loch Glendhu. Definitely need to return although off of the beaten track that part of the world is pretty wild.

We missed out on the berries but otherwise were similarly impressed with the surroundings. A good choice for avoiding injury aggravation too.

Always a pleasure to advertise the far north of Scotland! The geology of this area is so fascinating! Even having climbed all higher hills here, some more than once, we still can't say we saw everything... We have several routes in mind, mostly alternative approaches to mountains and coastal explorations. Fingers crossed for good weather in that corner!

We wanted to return to Assynt last weekend, but forecast was better around Fort William, so we ended up visiting the Wee Minister. Both of us struggling with small yet annoying injuries, we have to forget about big traverses for the time being, but a nice autumnal Munro is always welcome!