A wet West Lomond via the Bunnet Stane

A wet West Lomond via the Bunnet Stane


The Lomond Hills look nice from the M90, but I've never broken an Inverness/Edinburgh journey for a handy hill walk that far south. Checked the weather when I arrived back in Edinburgh from a short holiday to see where on the drive north might be dry, and it wasn't looking very promising anywhere .... but the afternoon and evening were forecast to be worse, so I decided the Lomond Hills were near enough Edinburgh that I'd be able to get to them before the rain hit, even if I didn't leave early. Knowing nothing of the hills other than them being in Fife and close to the M90, and not having an OS map for the area, I decided to stick to a route on Walk Highlands, and "West Lomond via the Bunnet Stane" got my vote - partly due to it being described as the finest route up West Lomond, but also because I liked the combination of the shorter drive/longer walk that this route had compared to others..... Plus the quicker route from Craigmead currently has 13 walk reports and this route has none. Now it will have one. A bad one, but one all the same!

I parked in the Bunnet Stone car park (a lay-by which will fit 4 or 5 cars), and headed up the grass track. My quest to avoid rain had failed from the start, as light rain started as I put my boots on, but at least it was quite a mild and still day, so the rain was vertical rather than horizontal. Start of the walk, going up the grass track beside the Scottish Water building Where the main track continues straight to the gate at a field, follow the branch round to the right

It doesn't take long to get to the Bunnet Stane and the Maiden's Bower with an info board about the geology and local legends. From there, I headed past the sheep to the top left corner of the field where a clear route started up the steep hill side. This part was steep, but not long and then it turns left and follows alongside a fence, climbing gradually. Over a stile, more gradual ascent and eventually reaching a grassy plateau. Looking back down on the start of the walk, Bunnet stane on the left of the photo

I was tempted to head straight up the steep slope for a quick and direct ascent to the summit, but I decided to stick to the route to do the full circular walk described. The path through the grass went on a bit further than I expected and I started to think I'd maybe missed the main path from Craigmead - but no chance of that, you'll know it when you see it, it's a proper, wide, stony path. The main route up from Craigmead, very visible from the summit area

Joining that path, I turned right and headed on up to the summit. I would like to describe glorious views, but the rain was getting heavier, the clouds lower, and views were not extensive. The trig point and summit cairn would be a nice viewpoint on a clear day, but that day wasn't today. Looking east from the summit There are paths off in different directions, but I continued with the route, and took the path to the south west from the summit, in the direction of Loch Leven. It then became a very steep descent, which was a bit precarious on the slippy grass, especially as any slip would be highly likely to have me ending up sitting in some of the vast quantities of sheep poo on the path. Fortunately I stayed upright and hence unsplattered by ovine excrement, getting safely over the stile. I continued straight on down from the stile, crossing various boggy sections, then eventually turned left for a short distance and then down again, aiming for the clear path through the heather (there were at least 3 paths taking different routes down to it, I don't think it mattered which was taken as the path in the heather was so clear as a target). Looking back up the descent route. This cairn is where I turned left for a short distance before heading down to the route through the heather Path through the heather

By now I was soaked, and knew my boots had reached that stage of being relegated in future to "dry day only" duty. The rain was a constant drizzle, and I'd given up trying to avoid boggy parts of the path, just splashing through them instead. The wet path then emerges on to the well made path down Glen Vale (another grassy path which runs parallel to the made path could have been used previously but now has a sign up saying not to use it due to the risk of rock falls). 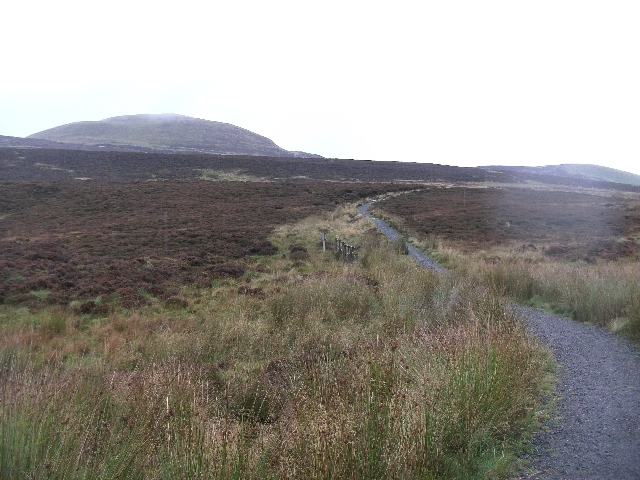 John Knox's pulpit. The grassy path below it is the one with rock fall warnings and not to be used, it joins with the main Glen Vale path visible in the distance At this fork in the path, go right. The sheep are there to help with directions and tell you not to go left.

All easy walking from here back to the car, following the path down the glen including a quick view over to John Knox's Pulpit rock formation, through a small patch of woodland, then back out on to the lane to turn right and walk back along to the car. As the walk description says, if the Bunnet Stone car park at the start is full, the one further along the road just means less of the road walk on the way back. I didn't realise it was actually a proper car park with picnic tables and a bigger parking area, and also an information board about Glen Vale and the walking routes. It's probably a better parking area to use than the roadside one if you're in a bigger vehicle. Path finishes when it reaches the minor road, turn right through the gate to head back to the car parks Glen Vale car park with picnic tables and info board. Info on the other side!!

If I thought the views from the summit were weather-obscured when I was up there, I was at least grateful as I headed back to the car that I hadn't set off any later - the cloud was completely smothering poor West Lomond now. Usually when I've been at a summit in rainy, cloudy weather, by the time I'm almost back to the car, it's magically turned cloud free. Not West Lomond!

So I didn't see West Lomond at its best, but it was still a nice walk despite the weather. It'd certainly be a nice hill to live locally to - with the number of paths and tracks I saw, there are obviously quite a few routes up it and around it to give plenty variety

Re: A wet West Lomond via the Bunnet Stane

Shame you had to do it in the wet, but nonetheless you gave a very clear description of how to do it. It is not so bad to go straight up where you stuck to the track described, and lands you on the main path sooner and nearer the hill: as you say, it is an excellent hill in the dry and I think we may now have done ALMOST all the walks up it.
(1) From the little road between East and West Lomonds
(2) Via the Bunnetstane
(3) Up the Maspie Den and behind the waterfall
(4) Via the path towards Bishops Hill
(5) From the East Lomond car park and over the top of East Lomond

I haven't had the energy recently to park in Falkland and climb East Lomond from there, and then go to West Lomond and down Maspie Den to the car.

We have never yet (and now probably never will) have the courage to jump onto the Bunnetstane itself, and in the wet, you were best advised not to try it!!!

It is not quite our nearest hill, but certainly the one with most routes up.

Re: A wet West Lomond via the Bunnet Stane

Thanks Sgurr - it's certainly a hill/area I'd be happy to re-visit to try 1 or 2 of those other routes if I'm passing, though hopefully in better weather!