Meall Ghaordaidh; not a mountain I'd been looking forward to based on Mr McNeish's write up in the bible of the munros. Maybe it was the snow capped mountains and the consequently frozen path meaning I avoided the boggy nature of this hill in the summer. Either way; I enjoyed the hill...

Setting off; the early morning light was being cast upon the wee hill of Meall Dhuin Croisg as the muscles got to work warming up... Perhaps this is why the hill doesn't get much of a write up; because to be fair the next picture I took was just below the summit; nonetheless; a fairly simple ascent which did look as though it would be distinctly unpleasant in summer was fairly quick. The views from the summit reached shortly thereafter were stunning; Glen Lyon shown off to all it's glory; and somehow even the dam didn't look ugly. The snowcapped mountains of the Mamlorn Hills were looking as good as they probably can look. There was little wind and although the weather said -6 Celcius I stayed at the summit for some twenty minutes or so just absorbing the view. I'm convinced Scotland is the most beautiful country in the world... Glen Lyon from the summit of Meall Ghaordaidh Time for the descent; which didn't take long. The steep part near the summit proved to be a good slide on the descent which got things off to a fairly rapid start with only a couple of badly placed rocks to avoid! All good fun... Werhayyyyy! I usually record my walks on the phone. My Tracks from Google is pretty good... The relative height I think is pretty good, but it seems to overstate altitude pretty consistently by 50 metres or so. Link to map on Google...

The all important stats; a whisker over 2 hours 20 minutes of walking time. 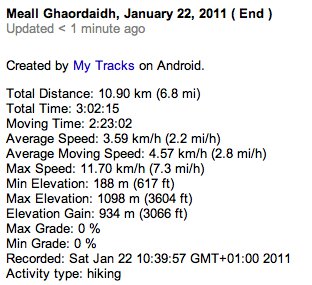 And then the perfect finish to what was in some ways a surprisingly gorgeous walk; a roof down drive in the sunshine across the countryside to my favourite pub (if plugs are allowed); The Lade Inn... The perfect ending to a mountain walk!

Looks like a good walk, your stats suggest you were really moving - walk time 2:23 for 11k! guess that wouldnt be the case with boggy ground conditions. Pics were good too but the car needs a wash!

Great photos/views from the top (as with most Munros in good weather). The ascent from the Glen Lyon side is a lot more interesting - and the drive up Glen Lyon is also lovely.

Hi Andrew,
Thats a fast time well done. We done it is similar conditions but with deeper snow to go through near the summit. Dont believe everything you read in Mcneish's books however saying that there is a huge hag field at about 700m to cross under the snow you were on which would be horrible in the summer if it was wet.

Time for the descent; which didn't take long. The steep part near the summit proved to be a good slide on the descent which got things off to a fairly rapid start with only a couple of badly placed rocks to avoid! All good fun... Werhayyyyy!

Was a nice day - we were quite nearby

Your hill looked very attractive from the NE - and the views you got from it were none too shabby either.

2dalmatians wrote:ics were good too but the car needs a wash!

I have told the good lady that