Wainwrights included on this walk: Bakestall, Carl Side, Dodd, Skiddaw


Morning at Skiddaw House produced an amazing do-it-yourself breakfast - cereal and bread and eggs to cook, and the fun of playing with a gas powered grill, although sadly there was no whistling kettle as at Black Sail.

There was also a fairly amazing view, straight down the valley to the west, and a morning that really couldn't make its mind up - the last forecast I had seen had been poor, and there was plenty of cloud lurking around, but the sun was doing its best to fight through. I had to get out to Keswick somehow, anyway, and it didn't seem likely that I could lose myself on the paths over Skiddaw, so I might as well head up there and hope for the best. My first objective of the day, as far as hills went, was Bakestall, up beside Dead Crags, which had been such a useful landmark the day before, and so my way led north by the access track, through the central valley and along the slope above Dash Beck. Track through the hills

First, though I wanted to make the detour to see Whitewater Dash, which turned out more elusive than I expected, so that I lost a surprising amount of height before I had any kind of view of it. 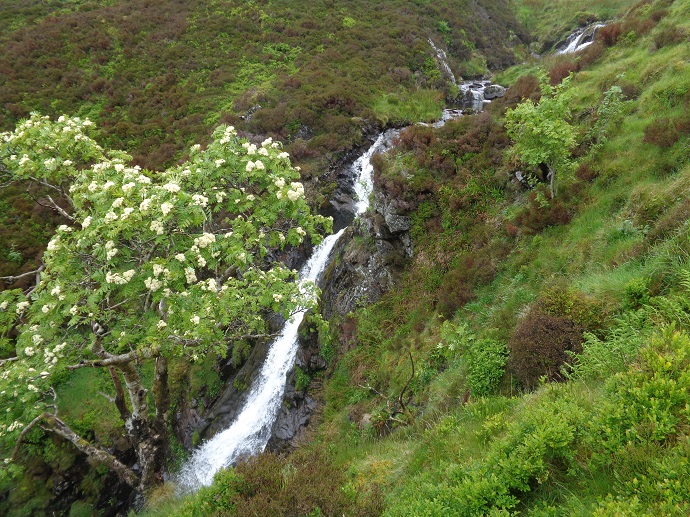 All that height had to be gained again before I could start climbing away from the track on a much smaller and muddier path. 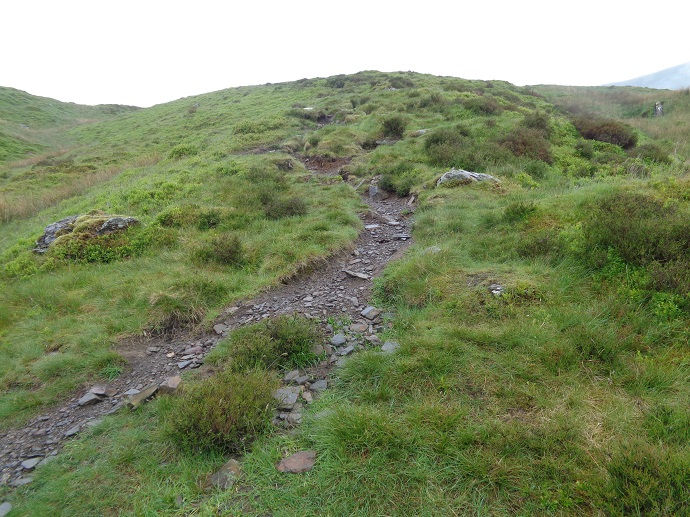 The path follows a fence up, with the slope easing as it comes nearer to the top, and a fairly substantial cairn by the fence corner is probably the highest point. Cairn at the corner

No views from the top, where I had just climbed into the cloud, but I wasn't swallowed up by mist either - it was still easy enough to see what was around me.

Wainwright's preferred summit seemed to be a cairn on a little rise not far away, with not very much to choose between them, and a good path in between. The path seemed to be generally better up here, as if Skiddaw's greater dignity demanded it, although no other path had joined in. That was a good thing, because as I climbed by the fence the mist and then the rain came in properly, although occasional brief gaps let me snatch a picture of my surroundings. Up by the fence

I just had to get my head down and plough on - a long steady climb with the rain coming in just as steadily, until the fence finally got fed up with it and turned away from the top of the ridge. From this point I obviously didn't get a view worth taking a picture of - or I was too busy fighting wind and sideways rain, because it was genuinely wild. For a little while the path seemed to stick to the fence, then it faded a bit and I doubted myself and headed up the slope, picking up occasional cairns for a while, but not much path.

When even those ran out I eventually picked up the good path more or less by accident - another long wet stretch upwards, then a cairn on the north top, and the true summit, unmistakable with the trig point, although there was nothing else to be seen. The trig point looked exactly as miserable as I felt - I've never noticed before that they have sad faces with eyebrows. So that was it - I was up, and now I would go down again, and I was at the stage of getting wet where it couldn't feel any worse until I started getting dry again. It did occur to me that I've never been soaking wet in the hills here on a Sunday morning without ending up pottering round Keswick on a sunny afternoon, but it didn't seem at all likely at the moment, so the quicker I got down the better.

To come down over the Little Man I had to head on over another cairned summit and then take the right hand path at a junction, so when I came past a top to a cairn where the line on the right was clearer I thought that must be either my junction or just a bend in the path. But I was soon losing height quite quickly, with a strong suspicion that I was on the wrong path, not that it mattered particularly as long as I came down somewhere.

It was a clear path, but still a fairly unpleasant place - loose in places and scraped bare in others, one of which was so sodden and slippery in the wet that I sat down and slid over it. Partway down I suddenly met a pair even madder than me, heading up in running clothes - I decided I didn't mind looking daft, and asked them to tell me which path I was on, to which they confirmed I was heading for Carl Side - and, I'm sure, told me that I would soon see a 'small loch' at the junction, which was a kind piece of translation!

Before that, however, there was a sudden stunning glimpse of another lake, shining silver. It's astonishing the impact that first view has, after hours of grey nothingness. The mist was definitely starting to break, and the junction with its loch was in sight below. The junction is almost at the summit of Carl Side, so it made sense to take the short walk up to it, but rather than doing the Long Side ridge this time (instead of the next time), my revised plan was to drop down to Dodd now, and leave a kind of full Skiddaw traverse for the future. A good path leads down the far side of Carl Side - the cloud was still coming and going, but it was beginning to be clear with intervals of cloud, rather than the other way round, and the valley views were good - it was a real change to see so much green. 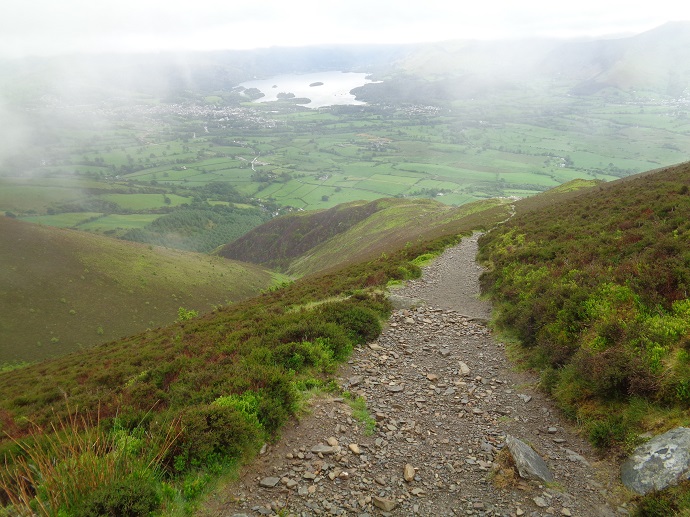 The path split at a place called White Stones - a grey rock outcrop, rather than pebbles - with half continuing down and half following a kind of little terrace before dropping more gently to the forest road by Dodd. It was a nice hillside, and mostly a good path, although one place had had a tiny landslide, leaving a gap to be skirted on rocks above. The path joined the forest road at a stile, but my route was only on it very briefly, before turning off again onto an uphill track. Onto the forest road

All forested hills, for some reason, are just the same - round, with a path which winds around them for a while before heading for the top. 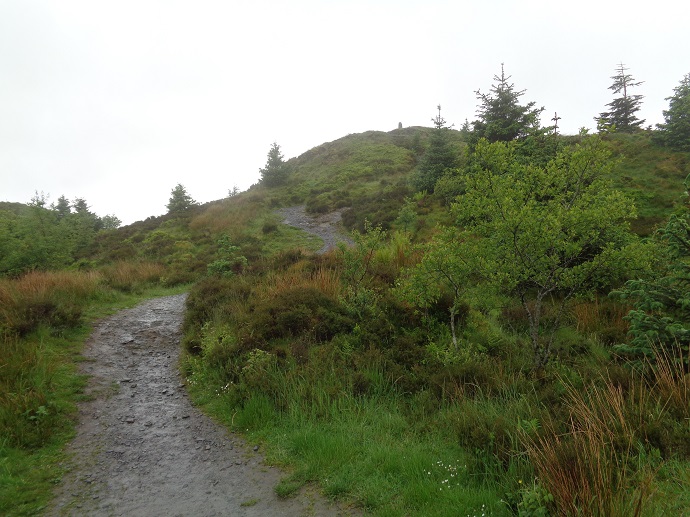 Instead of a cairn, the little bare summit had a kind of standing stone with a memorial plaque, as well as a view of two lakes. Derwent Water had been in view for a while, but the length of Bassenthwaite Lake stretched away impressively. There was one last obstacle, because the forest roads had signs saying that they were closed, and that you had to use a public footpath, which was always open. Not so much a path, really, as a precipitous streak of worn wet earth, where most of the possible things around to hang on to turned out to include brambles or nettles. The lower part of the path seemed to be more in use, although hard to find in among all the debris of whatever they were doing to the roads, and led onto a broader track down through the woods - deceptive, because although it looked good underfoot, I slipped and sat down hard twice, sat having learnt my lesson the first time. I came out on the minor road near where it splits from the main road, but decided to stick to the main road because I thought I was more likely to find a cup of tea somewhere along it - I was wrong, and might have done better turning the other way.

Astonishingly, the weather had now done its conjuring trick again, with the sun shining on the hills, and Skiddaw perfectly clear. Skiddaw in the sunshine

I had no need to get right into Keswick, though, as I was heading home on the Carlisle bus for a change, and a pub on the outskirts finally fed me tea. It was a nice wandering journey home, too, through places that I don't usually see, although I did end up going round Carlisle a bit looking for something to eat, before finally ending up in the pub by the station.

Blimey 204/214. Is it completion fever egging you on to go out in bad weather? Took a look at your map, and you are far better organised than us, with all your "to do" Wainwrights in a small neat area. Do you think this year will see them done?

More a kind of presbyterian dislike of wasting opportunity, I think

Although if the weather at the start had been like it was at the top of Skiddaw I think I would have slunk out to Keswick by a low road.

I've been neat from the beginning - I started off climbing all the hills in the far east, and have gone on getting to know an area at a time and then moving on to a neighbour. It's been fun.
Current plan is to get round most of the rest in one last weekend trip, and leave Binsey for my birthday weekend in January...