I've been meaning to write a report for this walk for a while....but better late than never! With a fantastic forecast for the last couple of days of my Spring leave, I decided to load the car with bike, tent and boots and head for the hills above Loch Callater. My plan was to ride in to the bothy, camp near the loch, walk out to Tolmount and Tom Buidhe and then do the White Mounth 5 the next day.

So leaving home at early o'clock, I was cursing thick fog all the way to near the Devil's Elbow on the A93, and started to seriously question the weather forecast! The fog then miraculously cleared within a couple of seconds to reveal a crystal clear morning with blue skies everywhere. Buzzing! 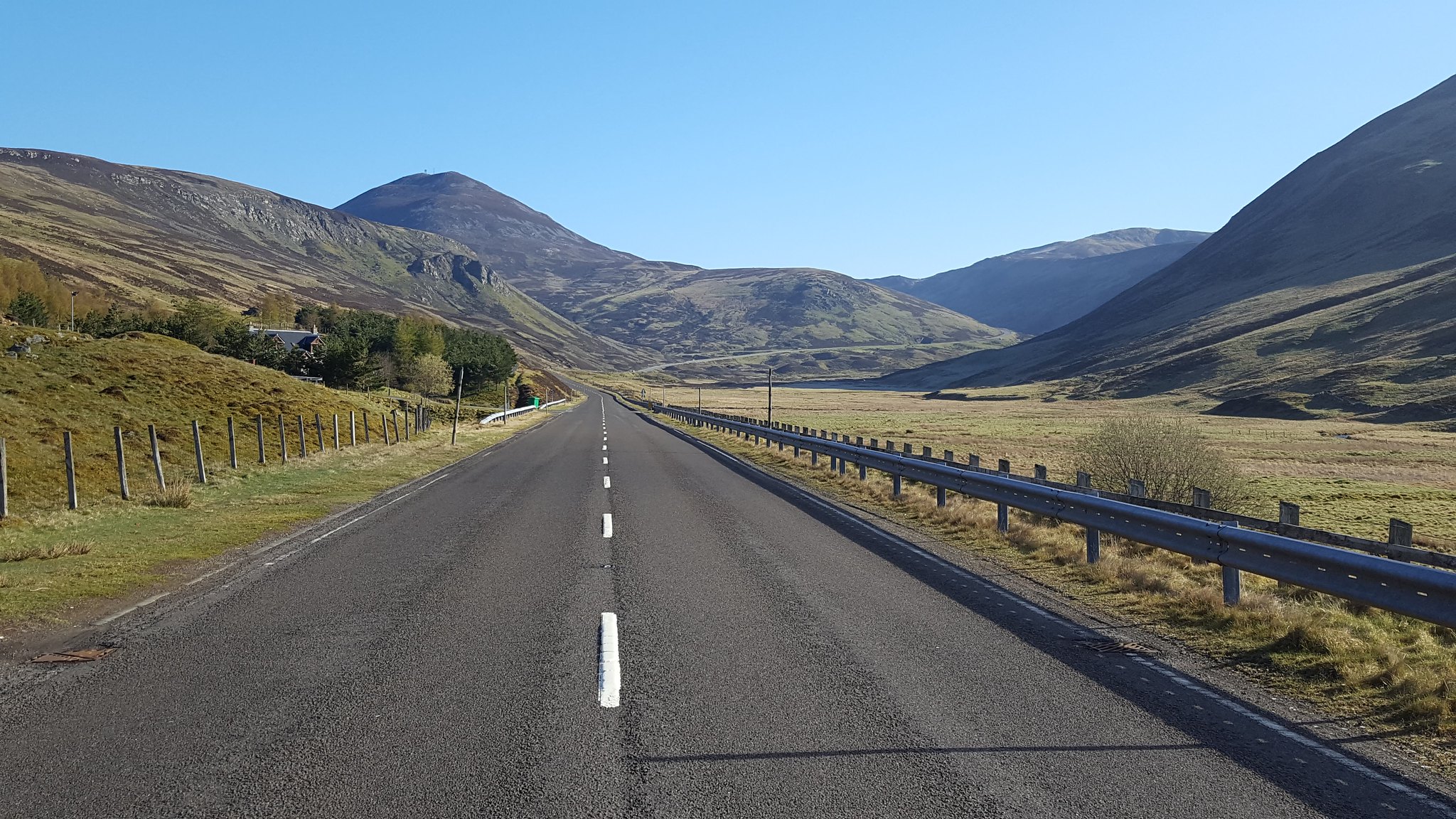 Parking up at the Loch Callater car park, I loaded my hefty amount of gear onto my back and bike, and set off towards the bothy. It was safe to say that I wasn't travelling light! 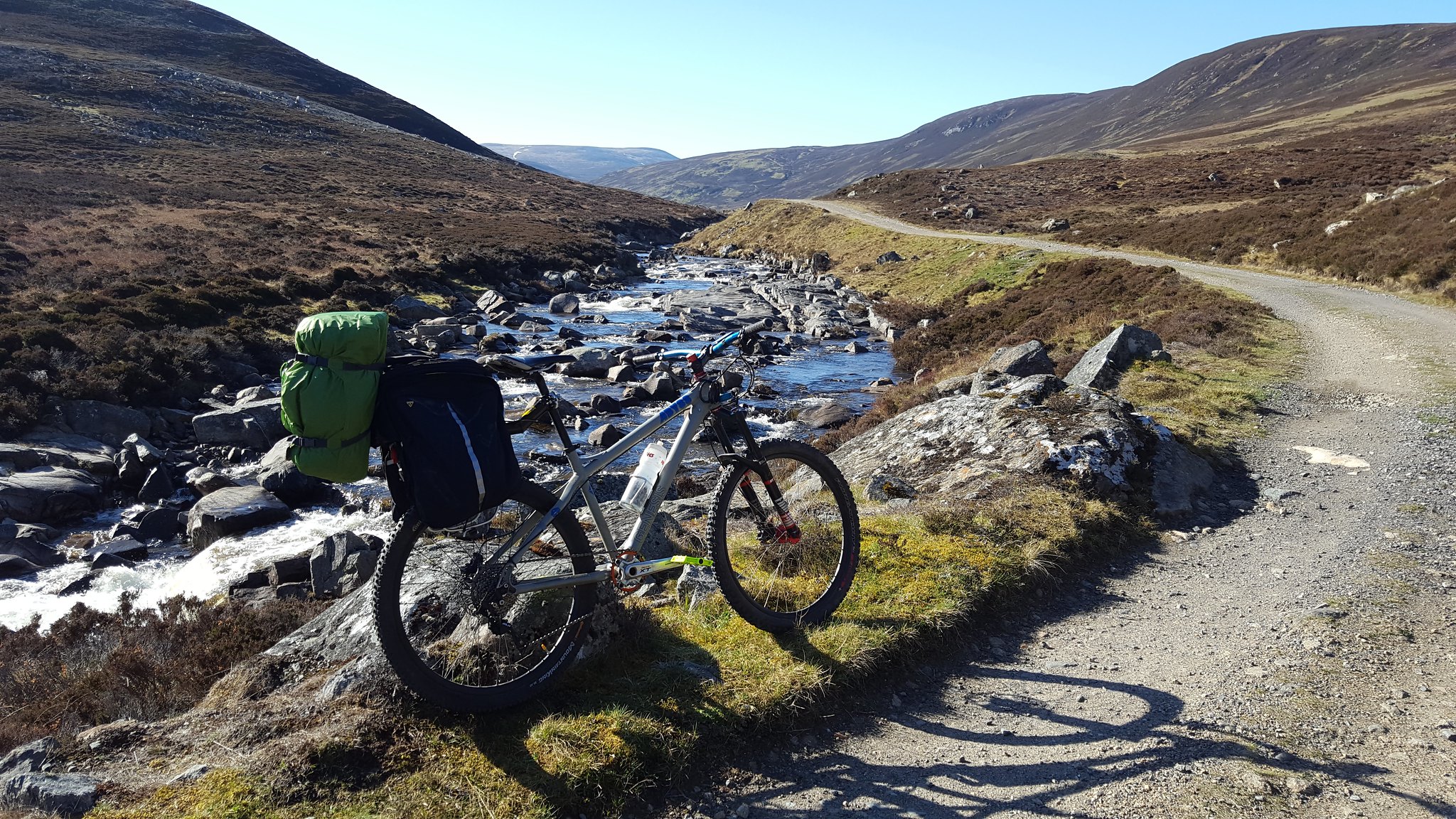 Laden bike and a cracking crisp morning up the track to the bothy. 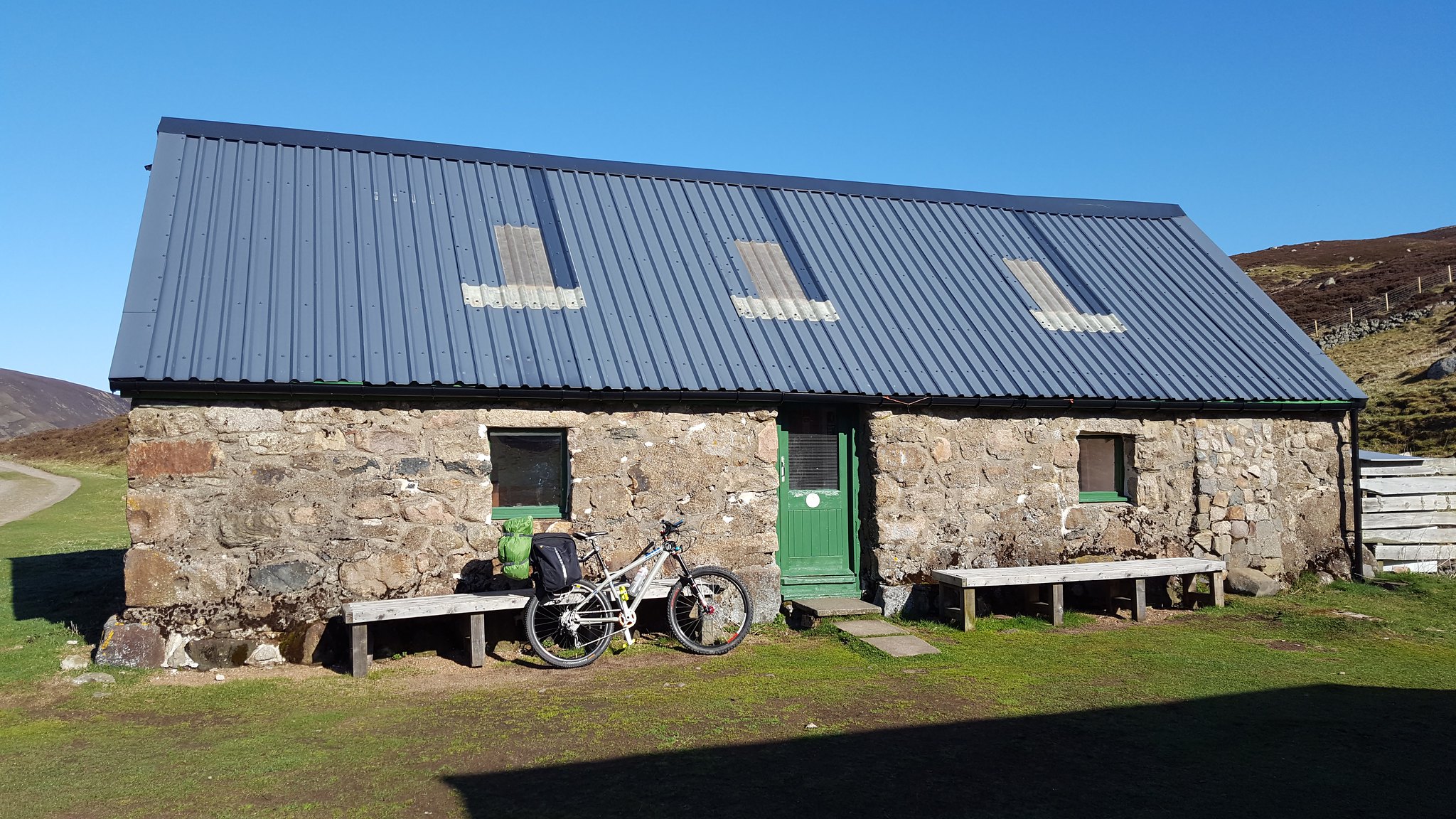 After about 40 minutes, I reached the bothy and had a nose inside. There was nobody at home, and it looked tempting to spend the night inside and forget the faff of camping....but I had my heart set on a loch side pitch, so I kept going a short distance and found a nice wee spot right by the loch. What a location! 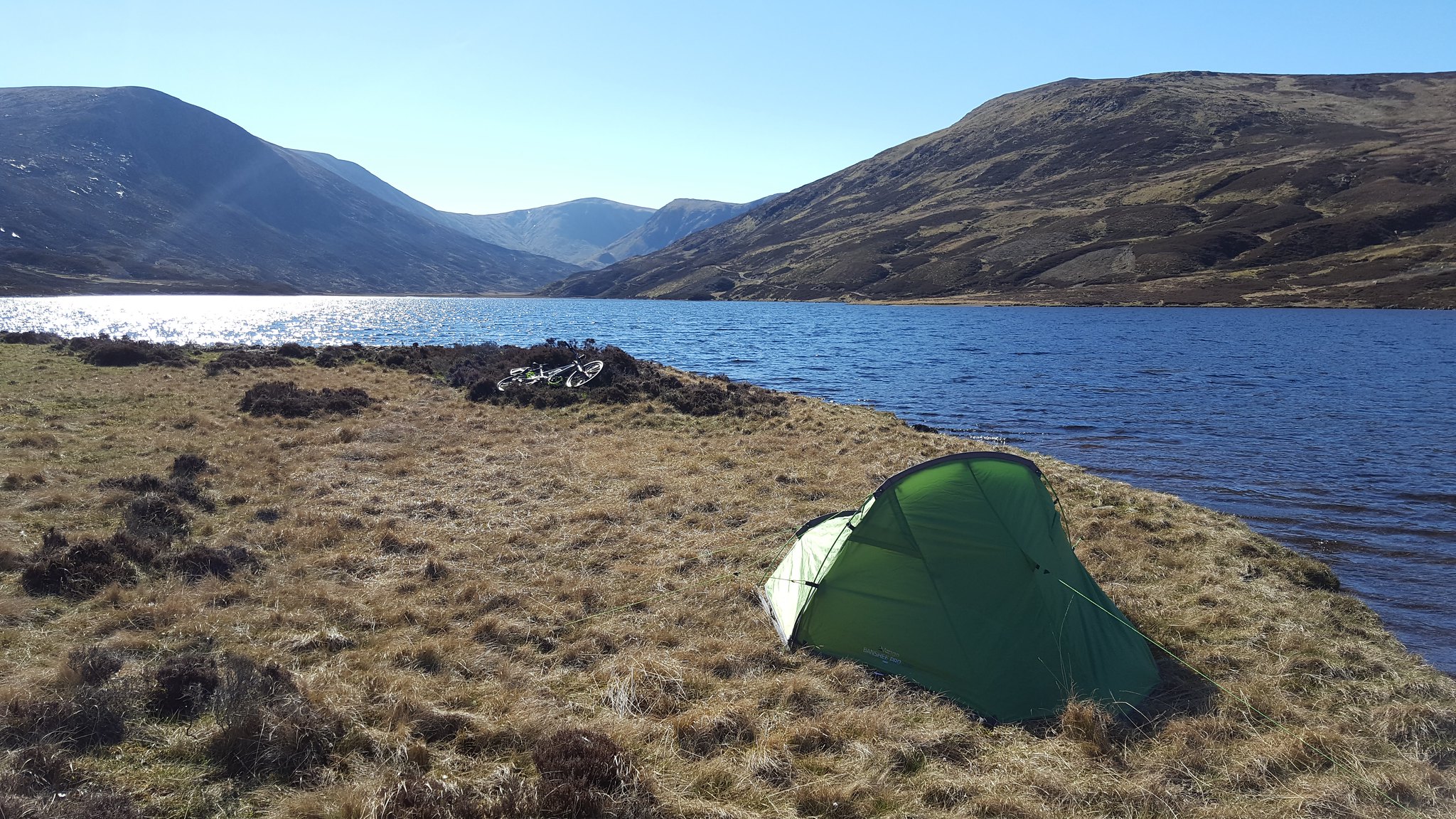 Feeling quite chuffed with myself, I took far too many pictures which all looked the same, locked my bike up for no apparent reason, and then started off on foot alongside the loch towards Tolmount. The lochside path was good singletrack underfoot however turned fairly boggy at the south end of the loch following the river. 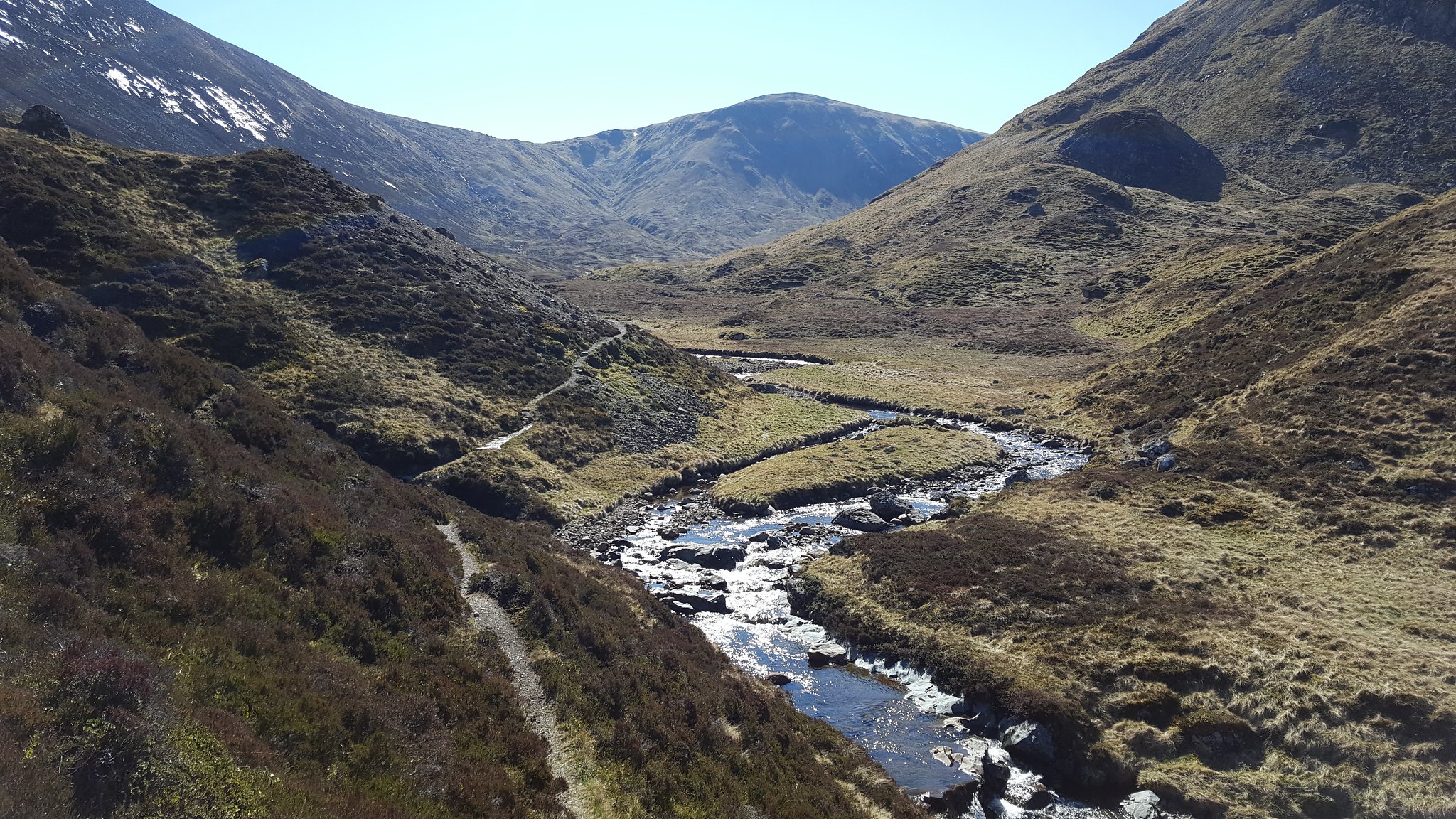 The path towards Tolmount, directly ahead.

I kept trying to tell myself to take my time and use up as much of the day as possible, but I was too excited to get up high and see the views. At 11.50am, and in 1hr 30mins from leaving my camping spot, I was standing on the summit of Tolmount. For April, it was roasting up there, hardly a breath of wind, and was T-shirt weather all day! Even better, I was totally alone, never saw a soul! 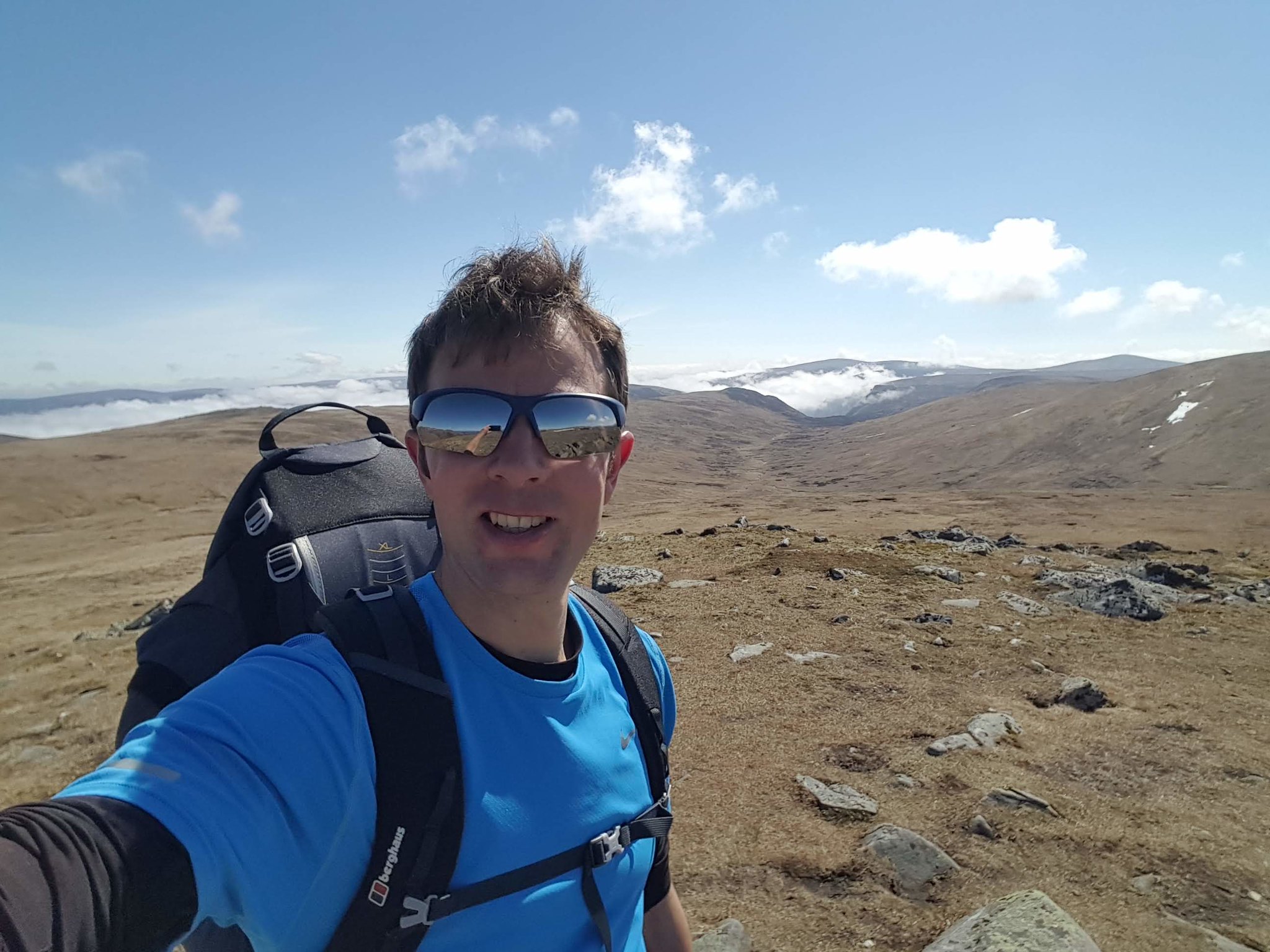 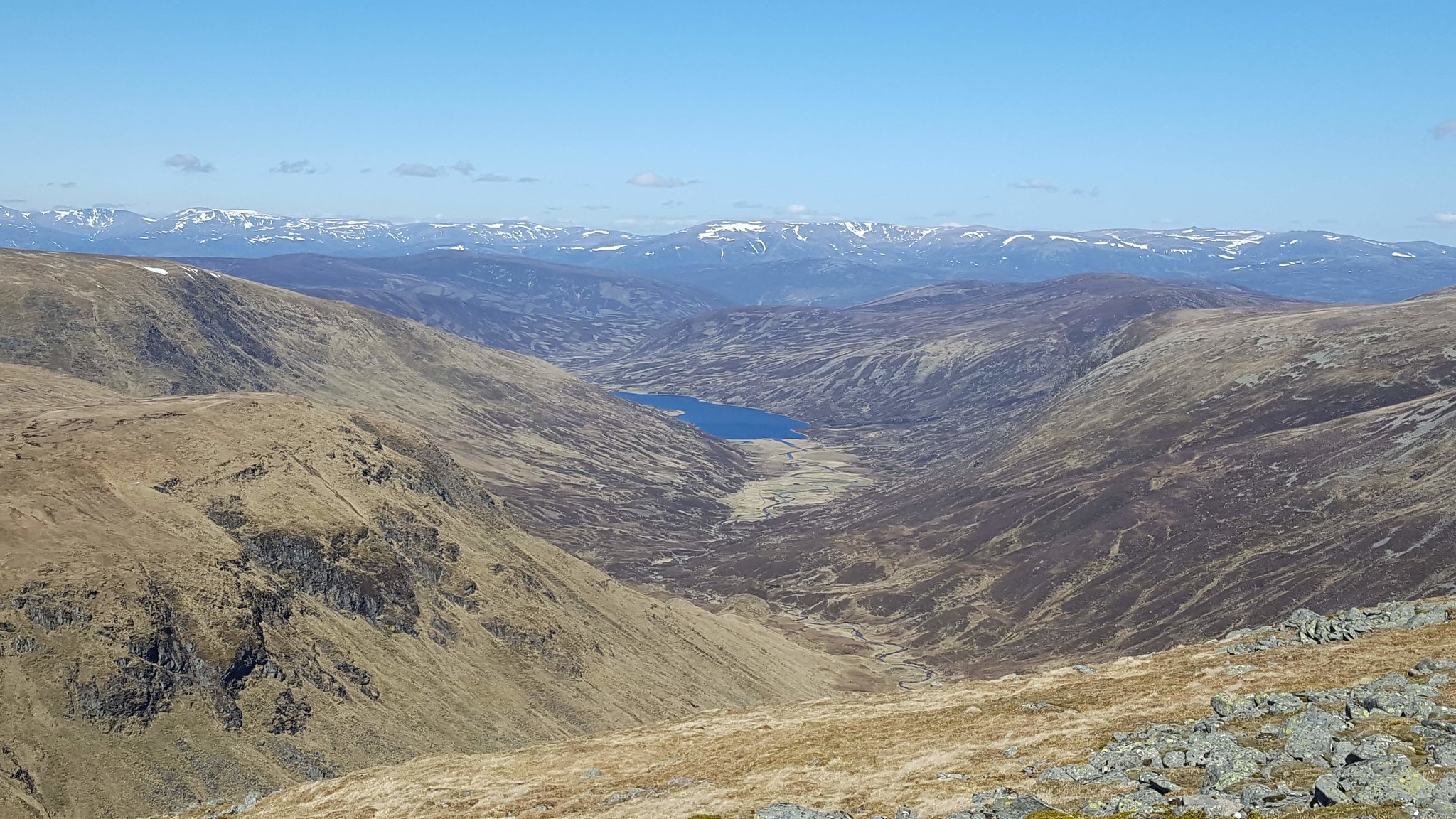 Back to Loch Callater and the Cairngorms beyond

After a lengthy lunch stop on the summit, I eventually moved off towards Tom Buidhe, which isn't far at all. Being honest, the summit itself isn't very exciting, but the rolling tops of the hills around and the cloudless blue sky kept me well entertained. 25 minutes was enough to reach the summit and another sit down to relax! The highlight of this walk was still to come however, so I headed off across the plateau towards Coire Loch Kander. I wasn't disappointed, it was absolutely stunning! Looking down into it, I tipped my hat to a friend of mine who has skied it a couple of times! Not for the faint hearted. 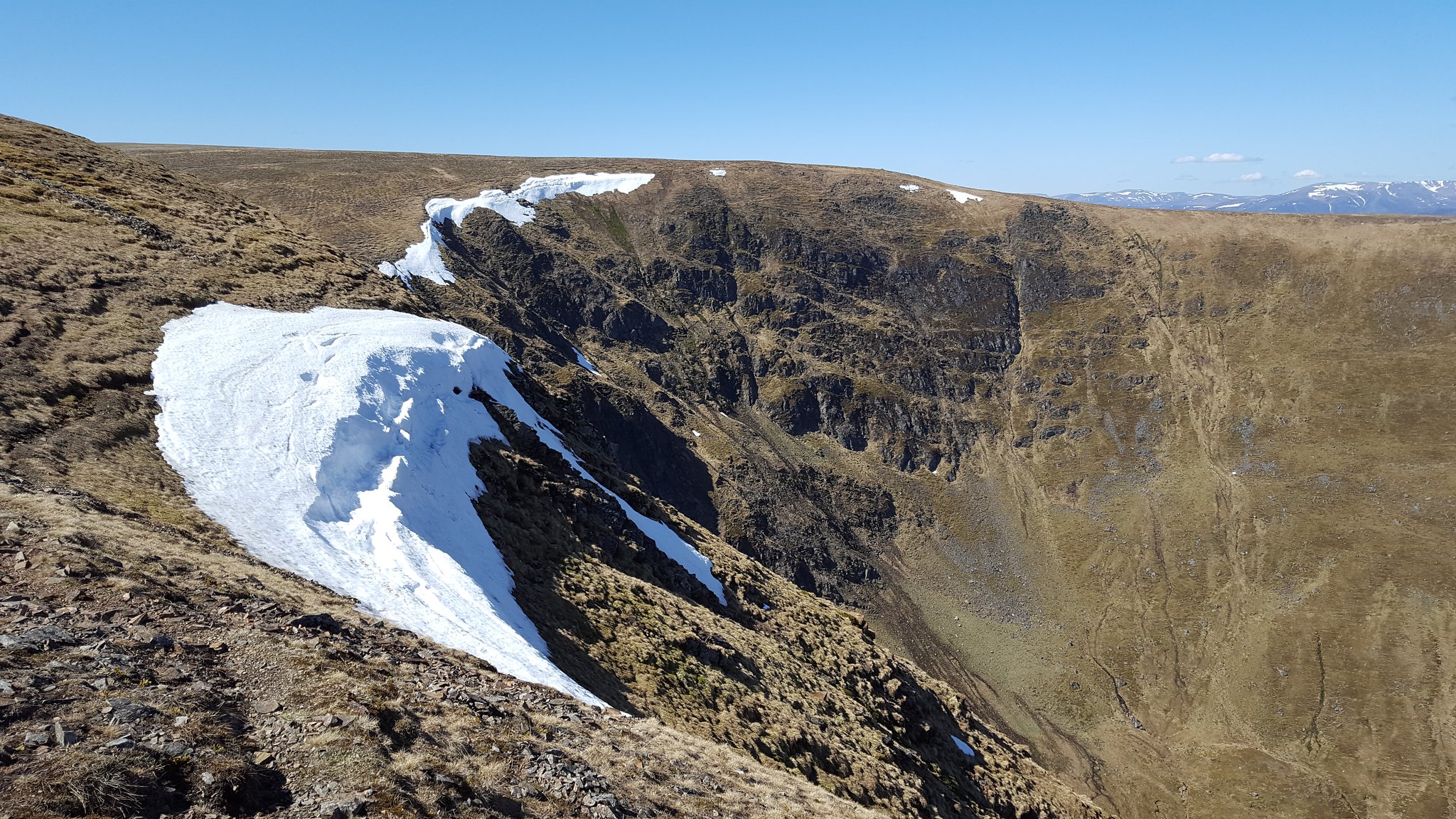 The impressive cliffs of Coire Loch Kander. Skis anyone? 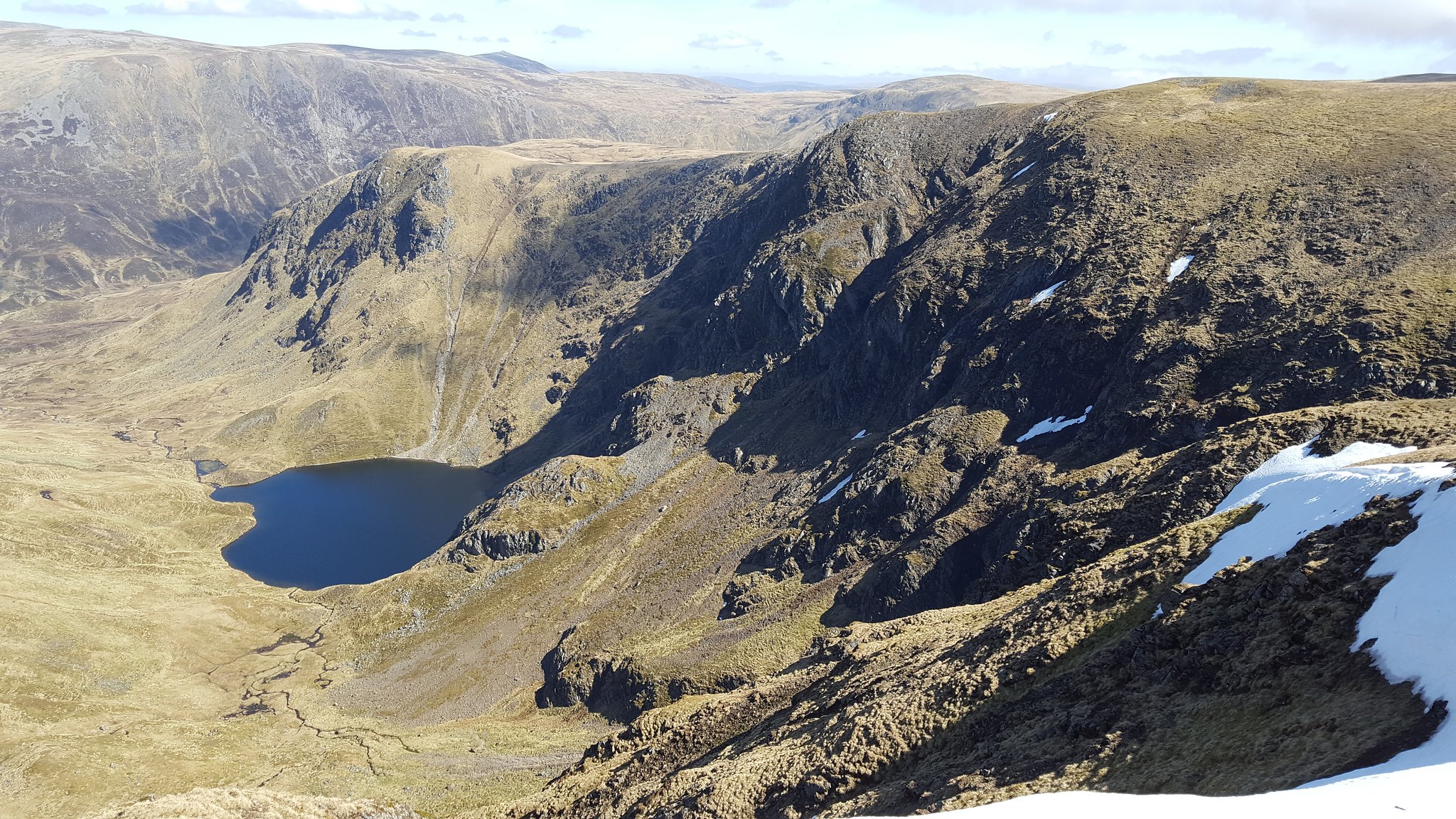 A long way down to Loch Kander!

Although it would be much quicker to retrace your steps up the Tolmount ascent, including the loop around the Coire and along the west side of Loch Callater is definitely worthwhile, the best part of the walk for me. From near the Coire edge, you pick up an ATV/land rover track all the way back to the bothy, which makes for very easy walking underfoot. The views over the Cairngorms are also superb. 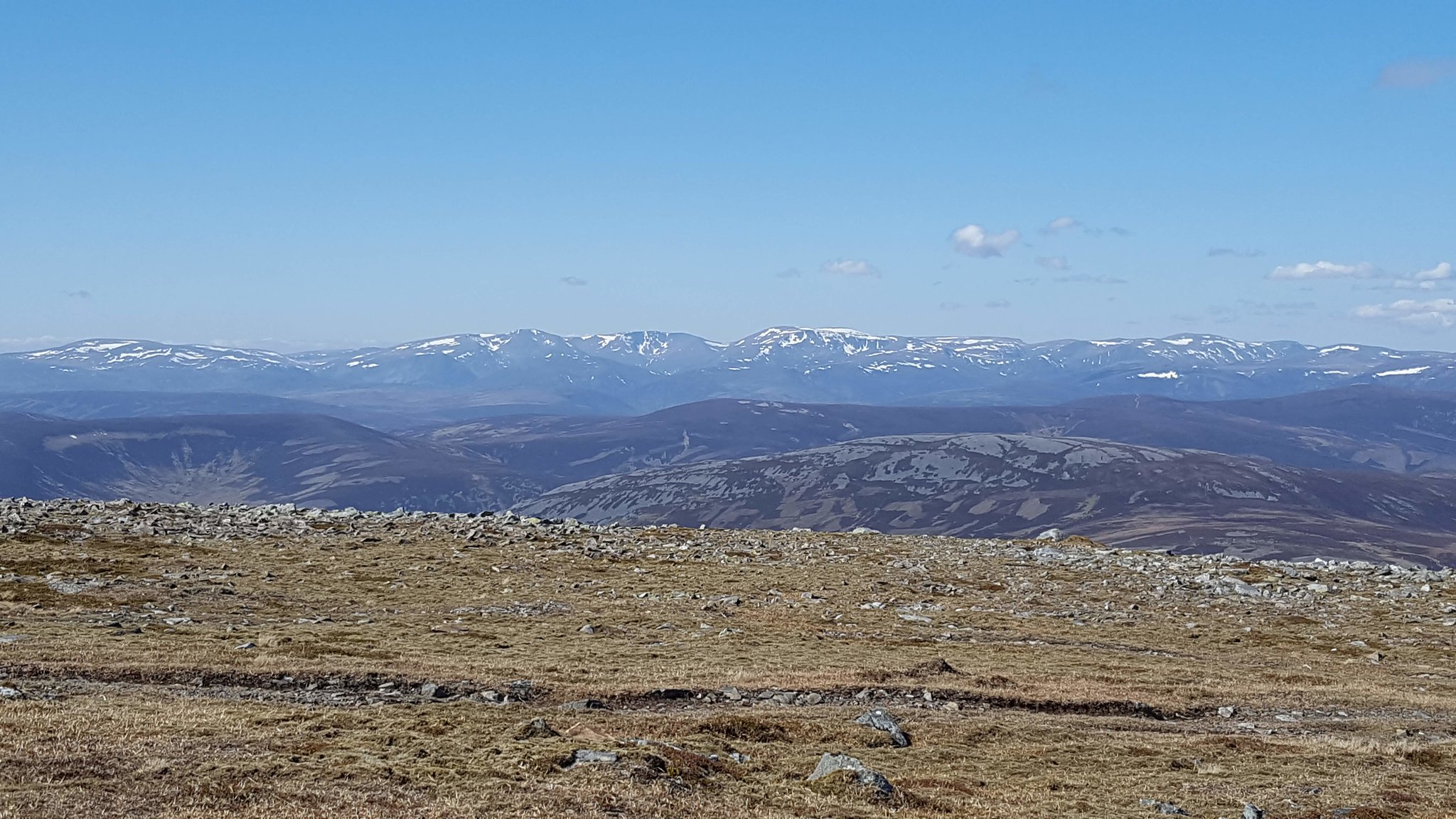 Stunning views over the Cairngorms from the track.

After a very enjoyable walk, I reached Callater HQ at 3.30pm. So basically I had made an arse of taking it easy and using up as much of the day as possible!! I spent a bit of time unpacking my tent etc and fired up the stove for a coffee while deciding what to do for the 6 hours until darkness fell. 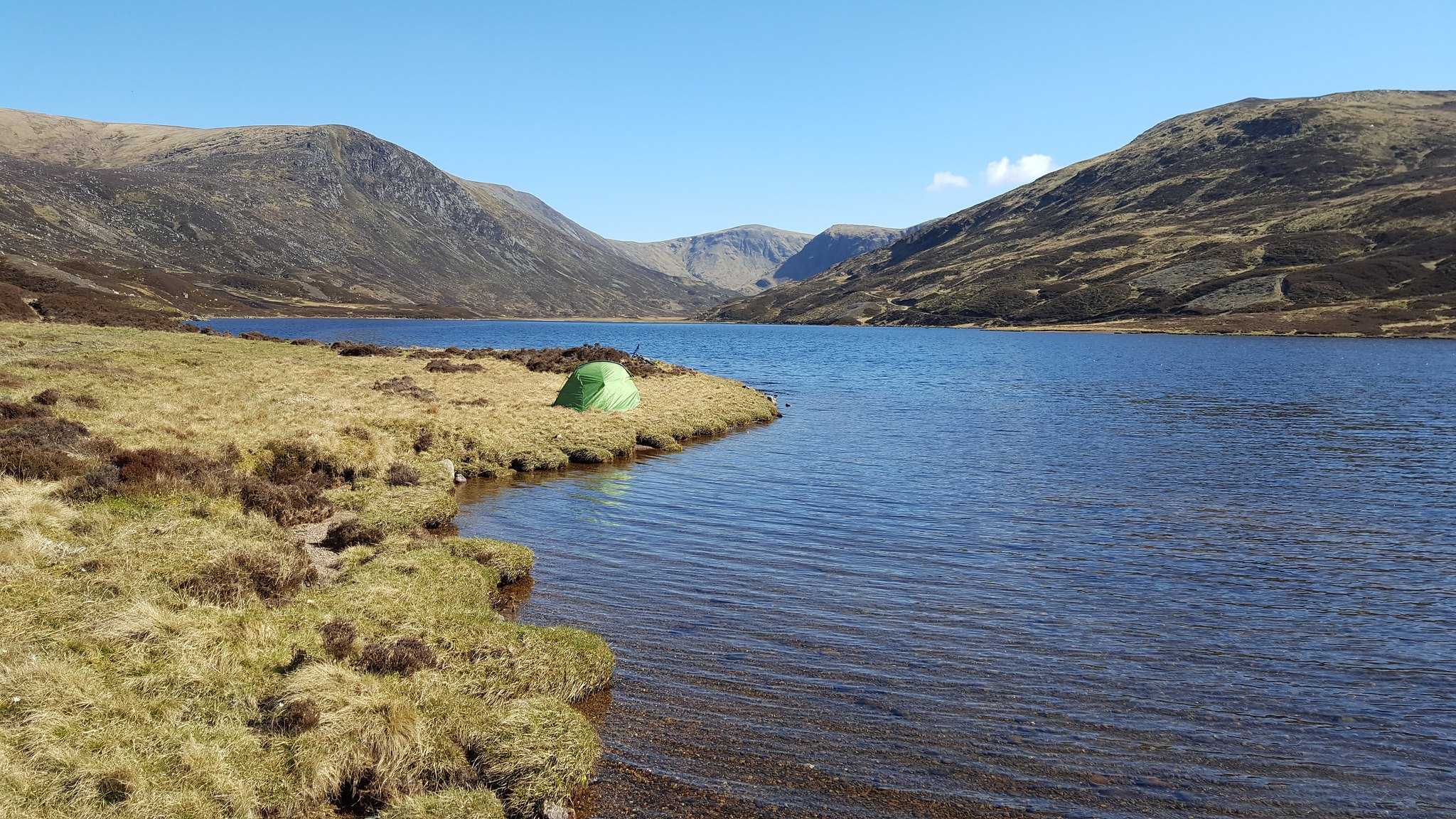 A rather idyllic spot to kill some time. 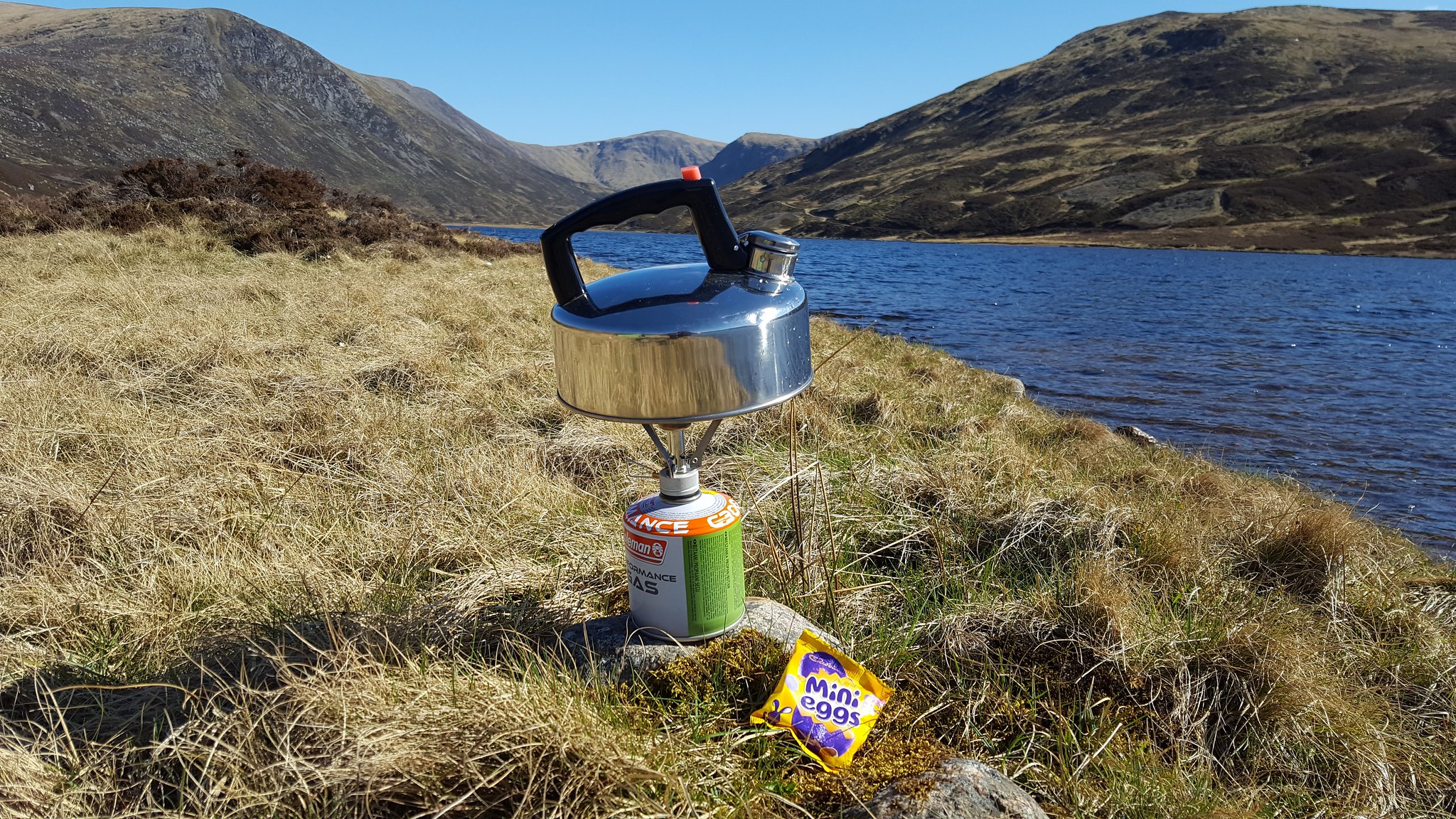 Since it was Easter-ish, I got fired in about a bag of mini-eggs with my coffee

After my brew, I decided to enjoy a blast around the loch on the bike, which was great fun. There was also a sizeable ford to cross, which I crossed without any comedy mishaps. 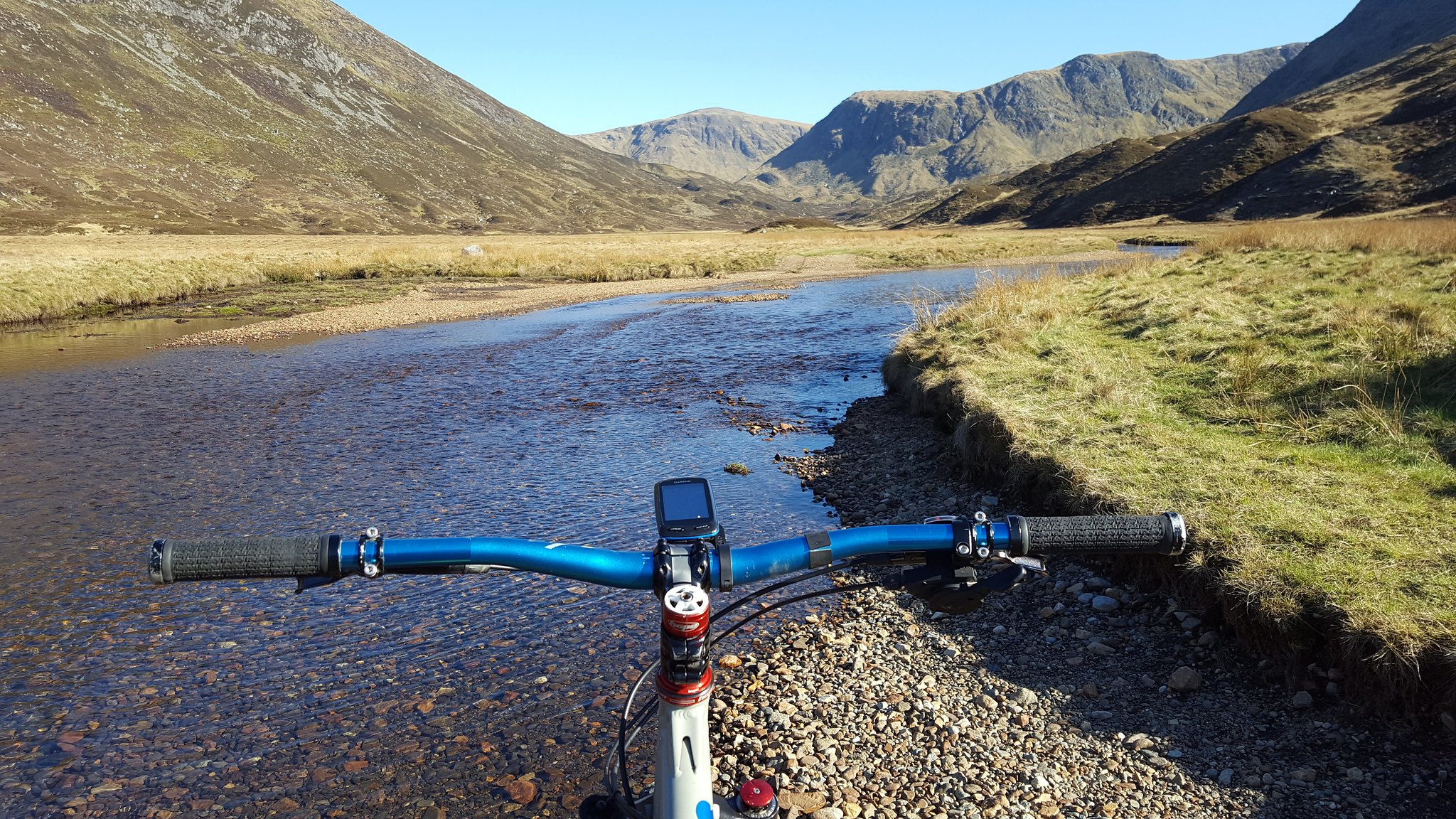 After my pedal, which never actually killed that much time, I took part in some sunbathing action outside the bothy and took my time preparing dinner, and more coffee

. The evening light over the loch was simply stunning, which could be enjoyed without wind or midges for once. Just bliss. I walked up to the monument above the bothy to eat my dinner with a view... 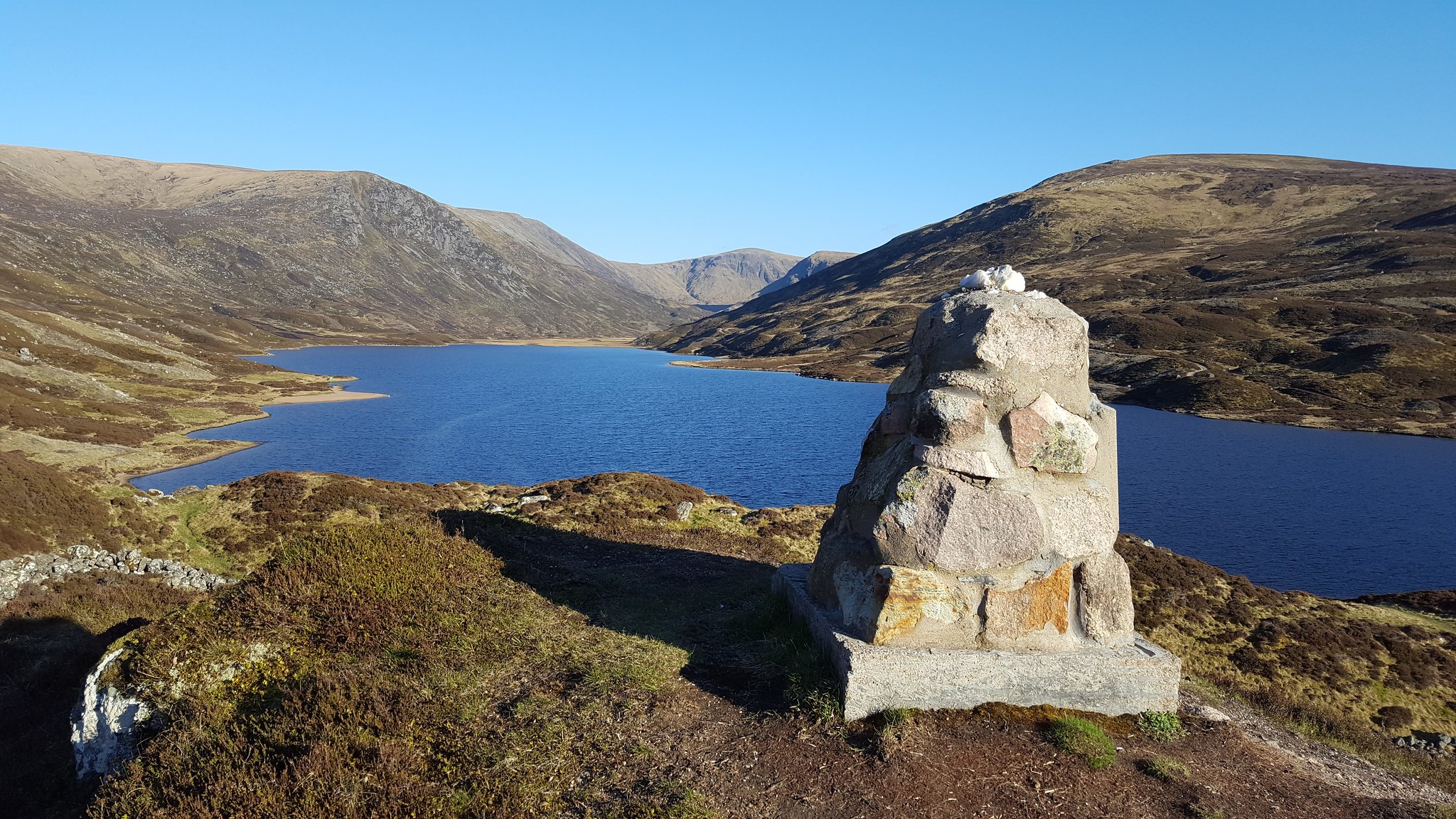 Table for one please.

Just as I was getting ready to turn in for the night, a young couple from Manchester way descended from the hills to the west and joined me outside the bothy. They gladly took up the chance of a bed inside the bothy, as did a further chap who appeared the Lochnagar direction after a big day out. Bidding farewell, I headed for my tent in a now chilly evening and dived inside. It turned out to be rather baltic in the night, and I was glad when my alarm sounded to get up!

I awoke to a covering of frost on my tent at 5.30am. The scene which greeted me when I opened the tent door wasn't too shabby though... 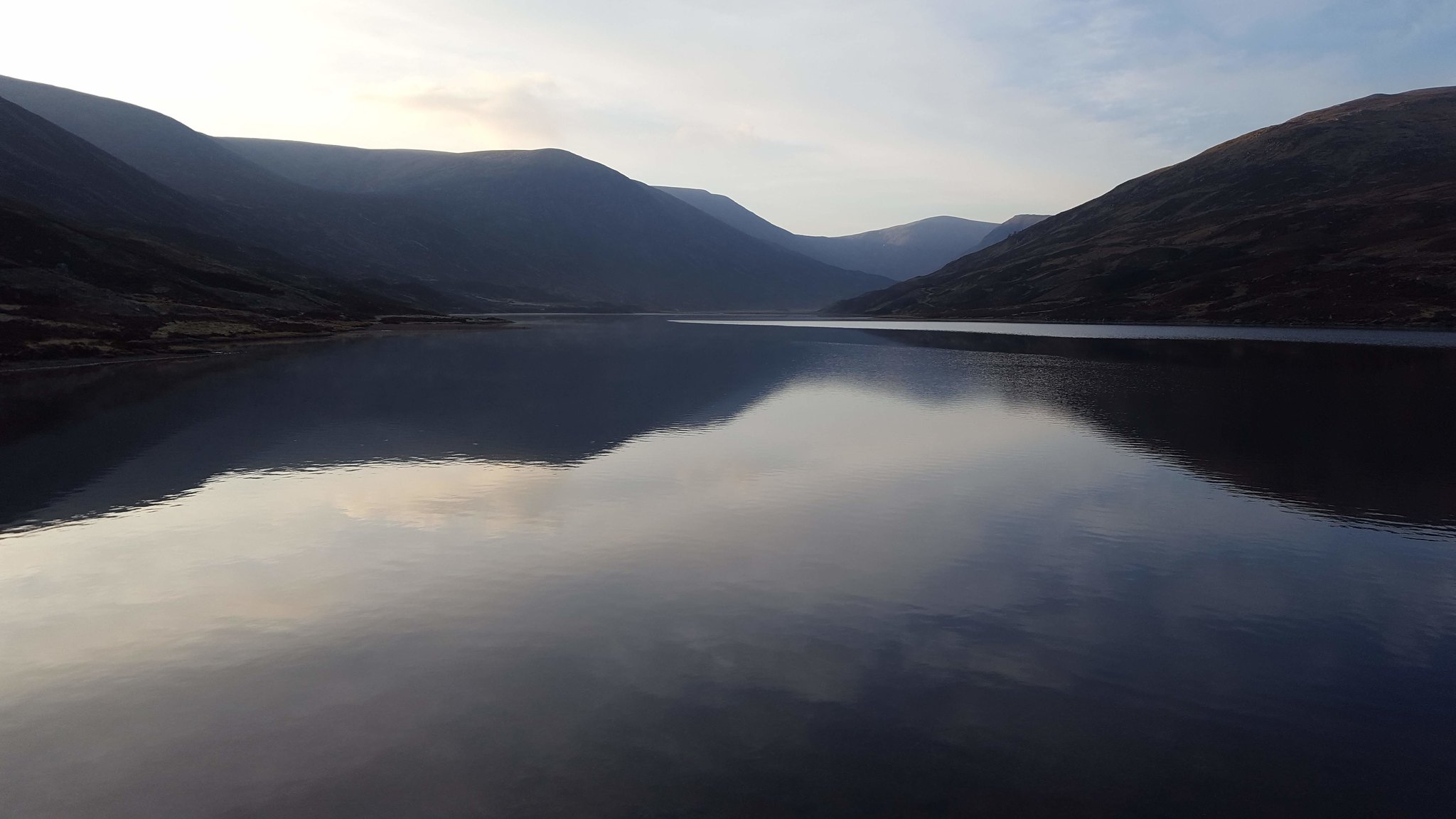 After cooking up some porridge and another pint of coffee, I started up the path behind the bothy to tackle the White Mounth 5. I was pleased to get going as the temperature had dropped to about minus 1 overnight by the loch, a sharp contrast from my sunbathing experiences just a few hours earlier! I told the sun to hurry up and pump out some heat. 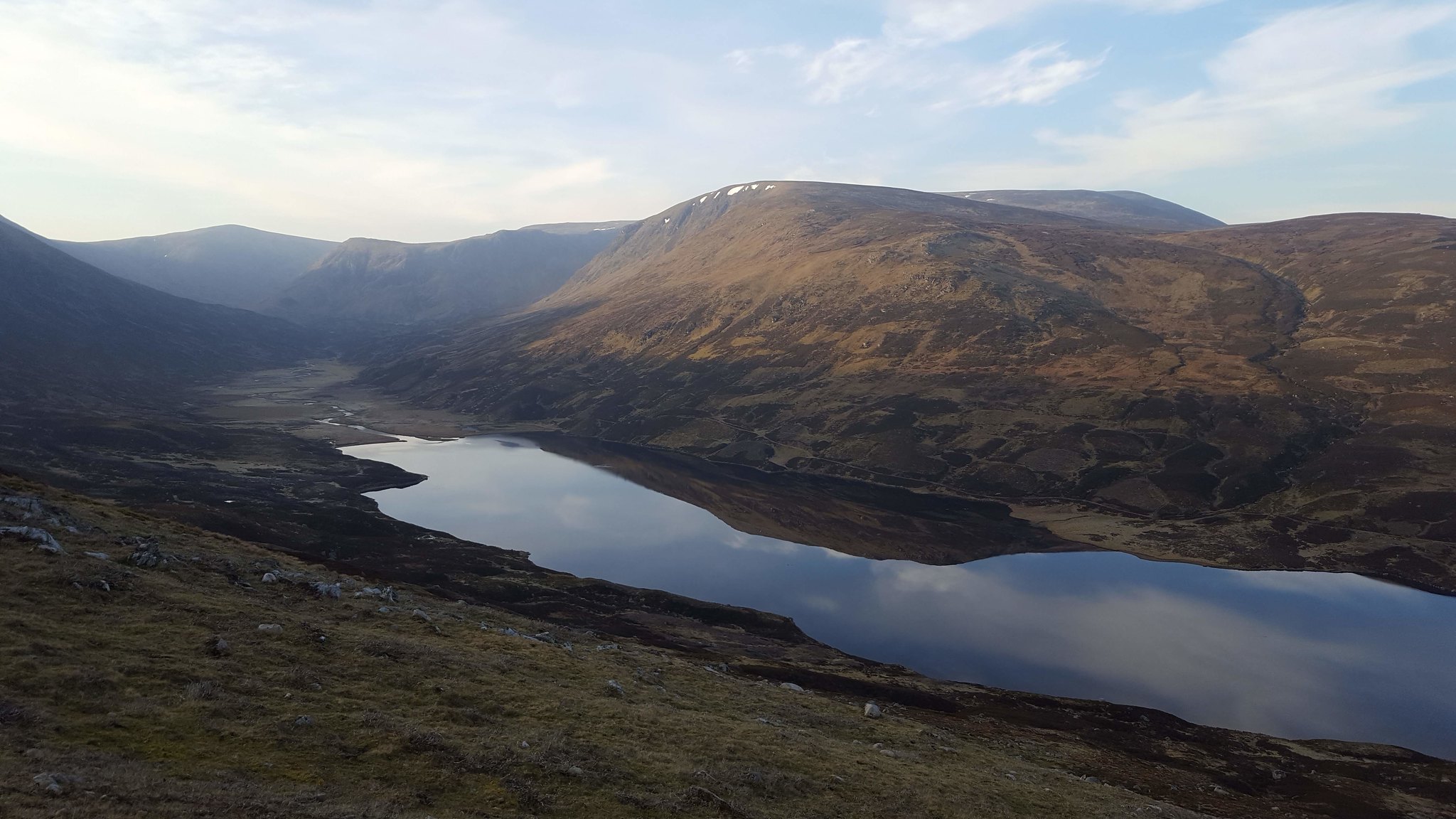 Starting the climb up to Carn an t-Sagairt Mor

Thanks to my early start, I stood on the summit of Carn an t-Sagairt Mor at 7.50am. It was a fine morning but I didn't hang about too long before heading towards Cairn Bannoch and Broad Cairn. My route was slightly unconventional as it would basically involve two "out and backs" towards Broad Cairn and then to Lochnagar. 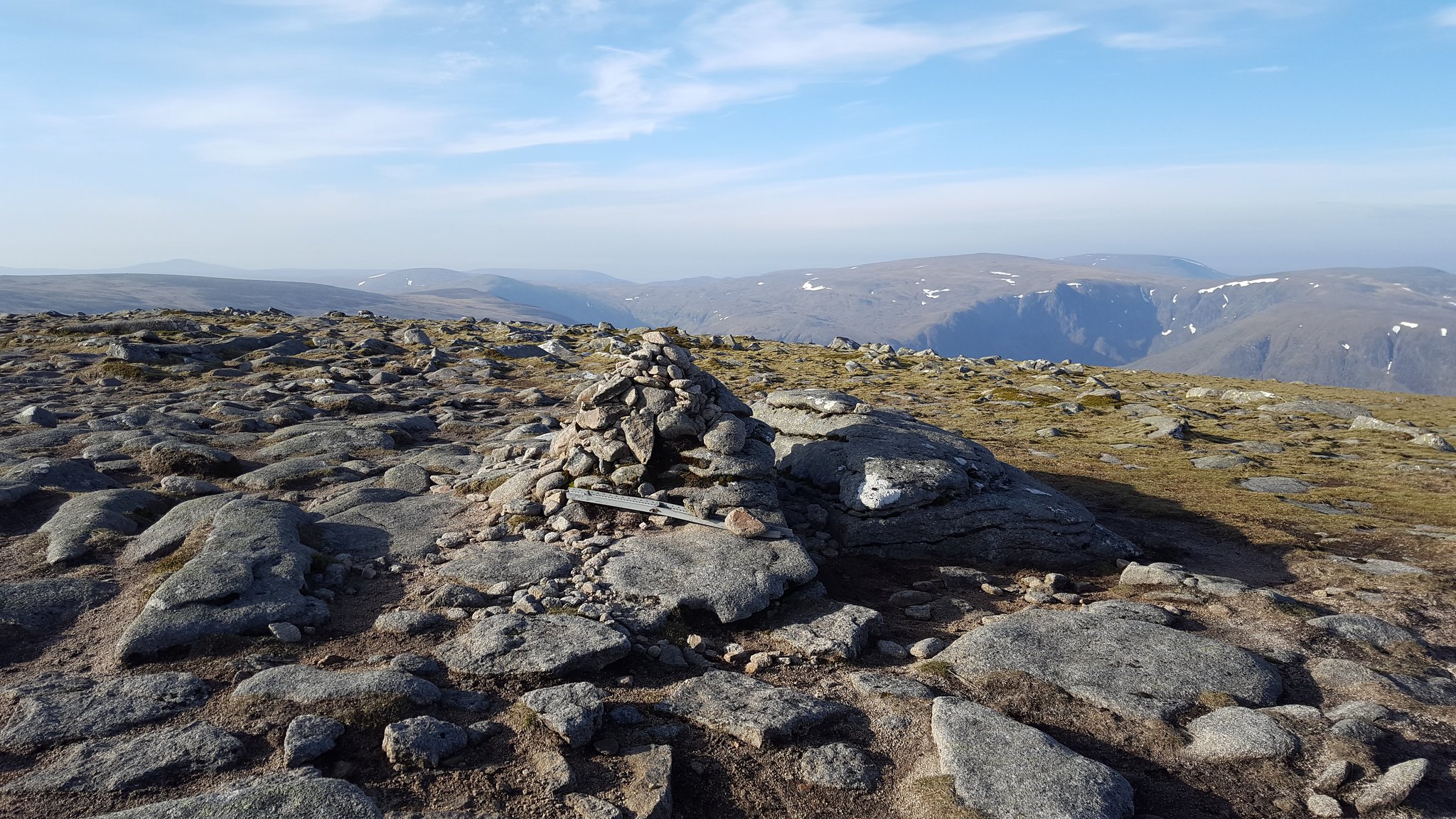 Summit cairn of Carn an t-Sagairt Mor, looking over to Coire Loch Kander from the previous day. 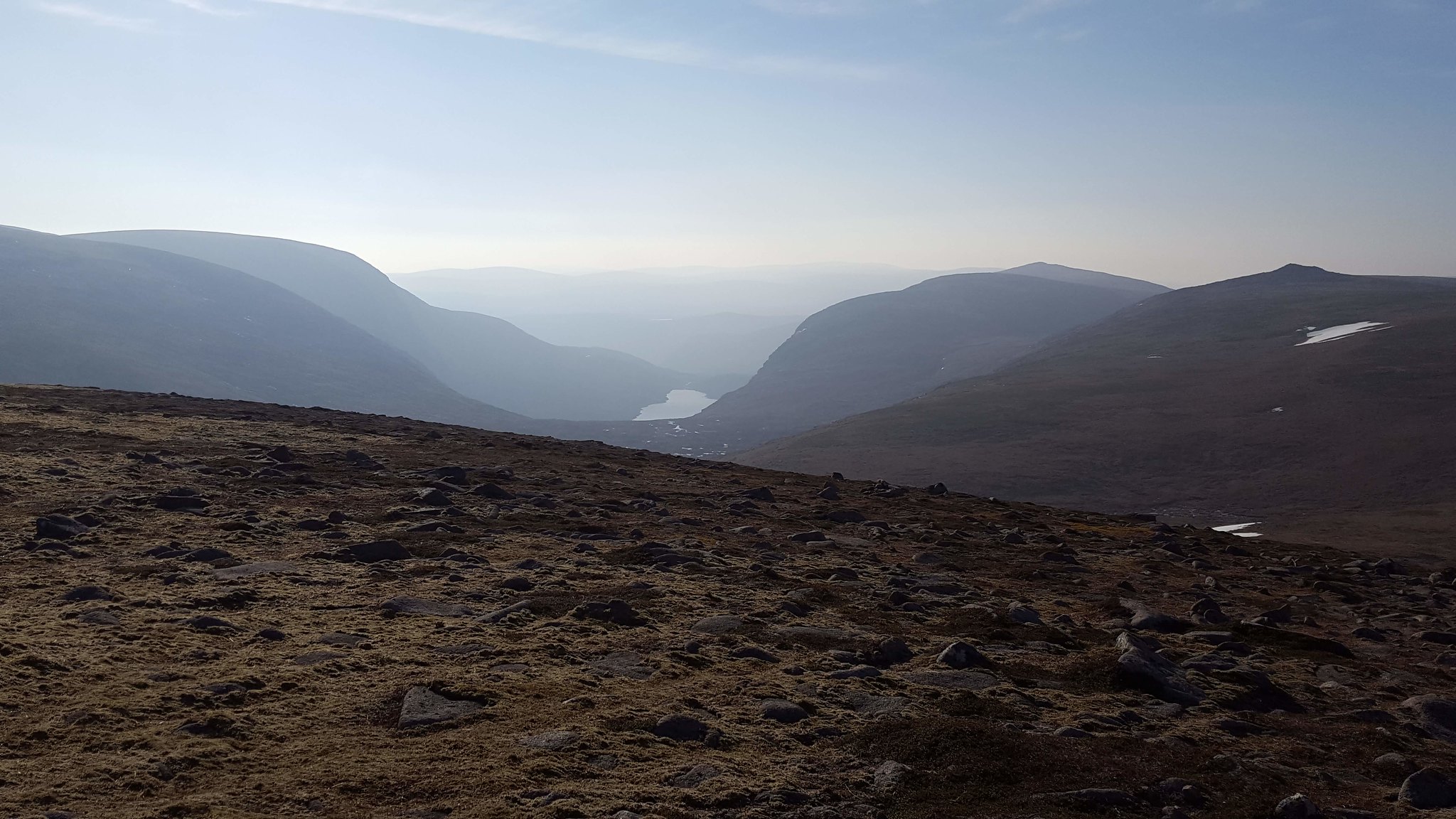 Hazy morning light heading to Cairn Bannoch and Broad Cairn in the distance.

The ground was very easy walking underfoot, no bogs and decent paths all the way. Cairn Bannoch isn't the most exciting so I kept plodding on to Broad Cairn, reaching the summit and third munro of the day at 9am. 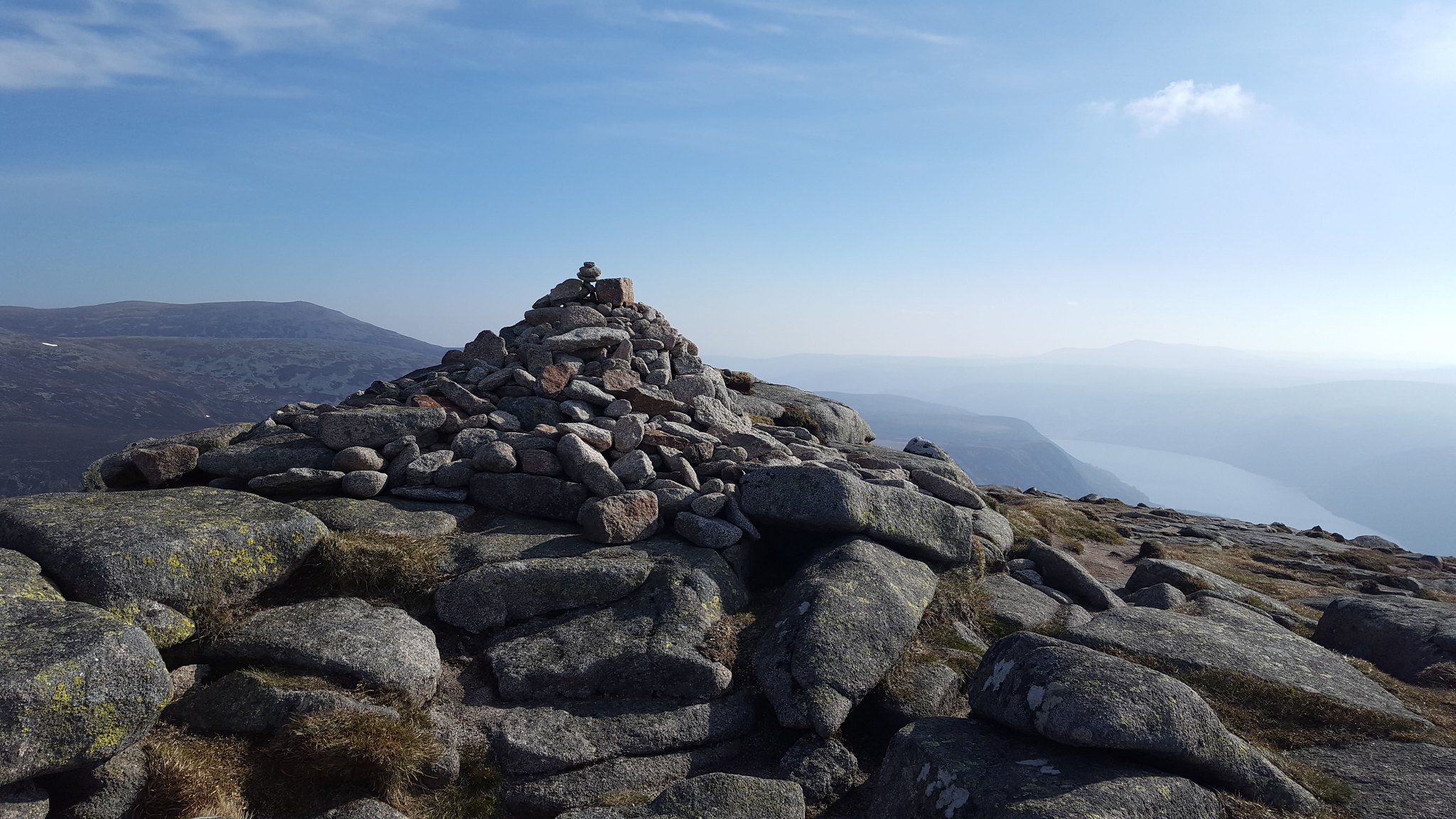 I enjoyed a lengthy seat at the cairn while the sun was finally starting to produce some heat. It was a fair bit hazier than the day before, but I couldn't be too picky as there was still no clouds in the sky! My route then took me back over the Cairn Bannoch summit before arcing round to Carn a'Choire Bhoidheach and finally Lochnagar. Conditions were great underfoot the whole day, which made me think I could have brought my bike up for these hills...maybe another day. 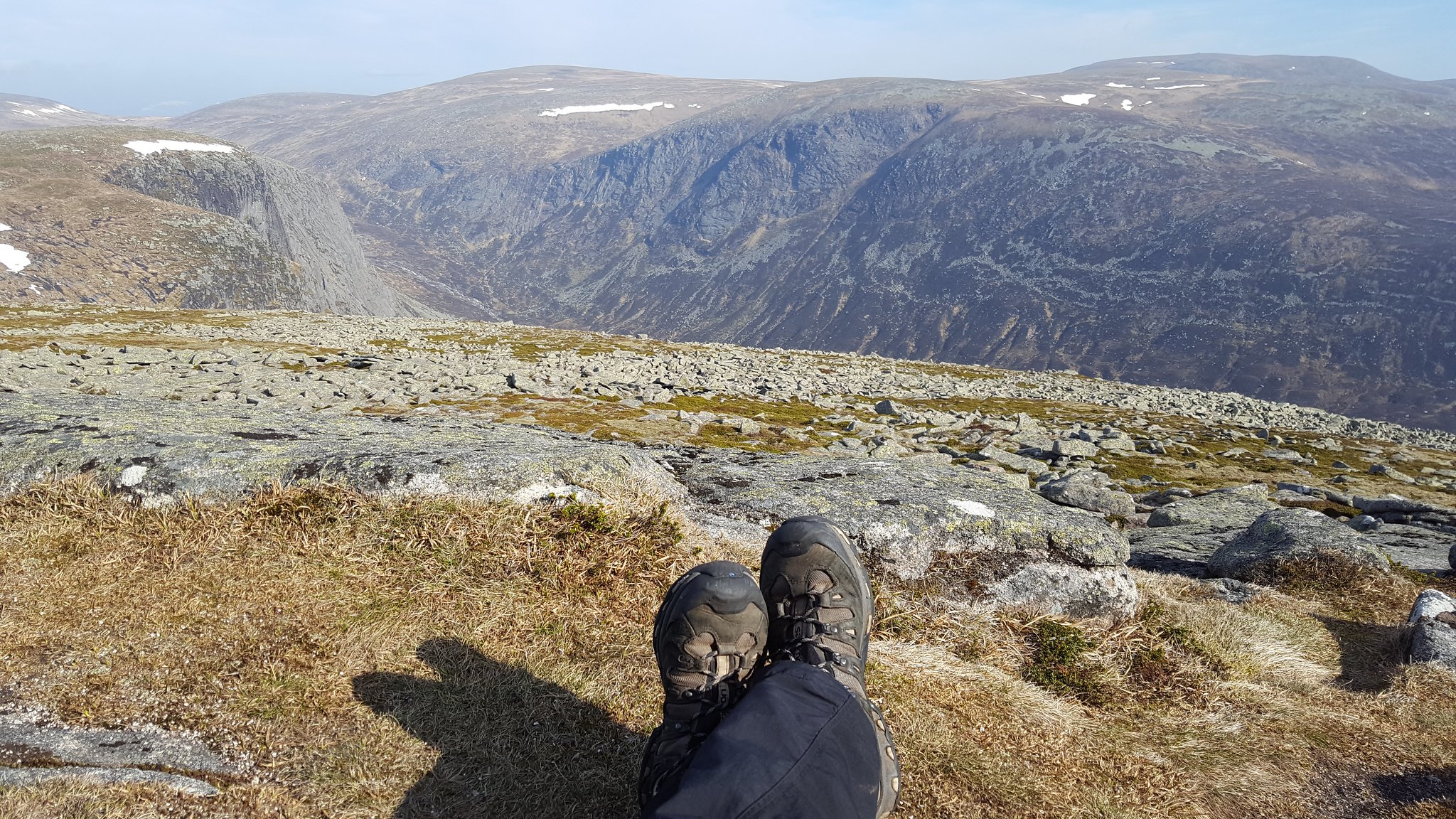 Feet up to enjoy the views. 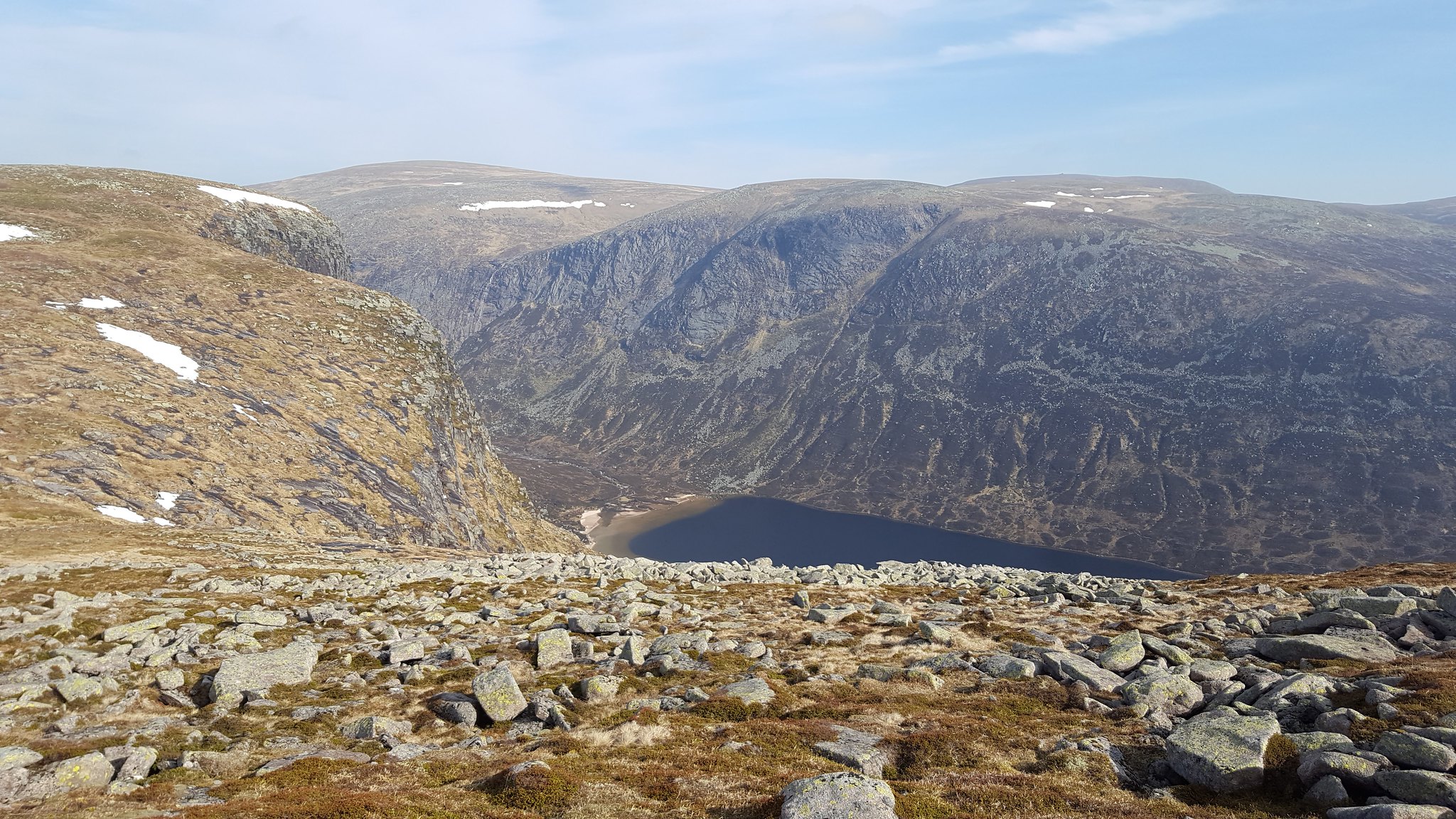 The view down to Dubh loch and across to Carn a'Choire Bhoidheach.

The views down to Dubh loch were superb, and continuing to make decent progress I was over Carn a'Choire Bhoidheach and off towards Lochnagar in what seemed like no time at all. I met one chap on a mountain bike who confirmed my notion that I would return to ride these munros another day, albeit the guy wasn't a great advertisement for the enjoyment of the experience as he said he was totally knackered and hadn't been on the bike in a while!! 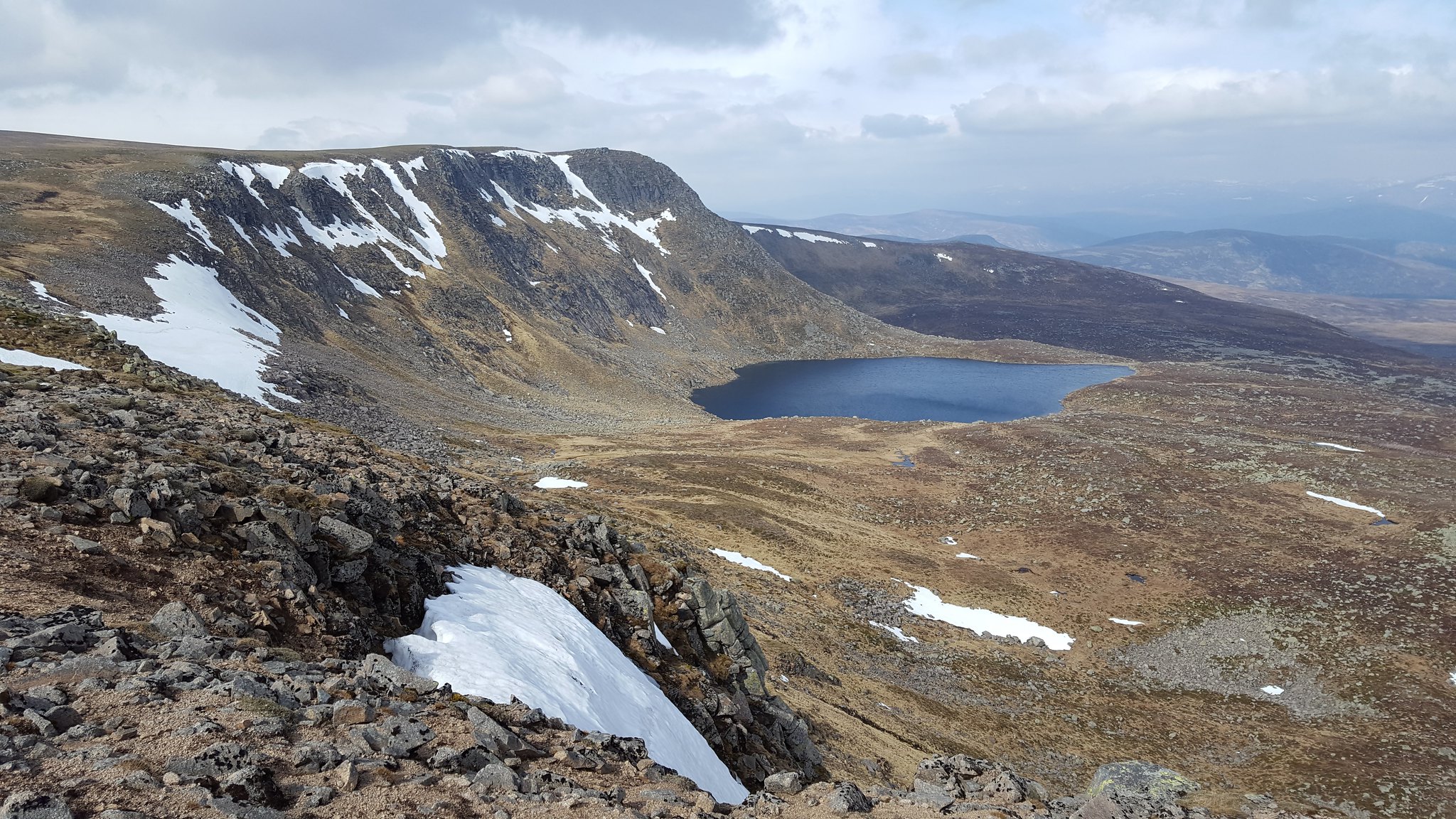 At 11.35am, I reached the top of Lochnagar and was suddenly in amongst what felt like tons of people! It was a bit strange after not seeing a soul all day to now have to wait my turn to stand on the summit. It was a good feeling however, and had been 13 years since I last stood there. I then spent a good deal of time walking around the cliff edges trying to imagine people climbing up there in winter! Just nut, not for me!! 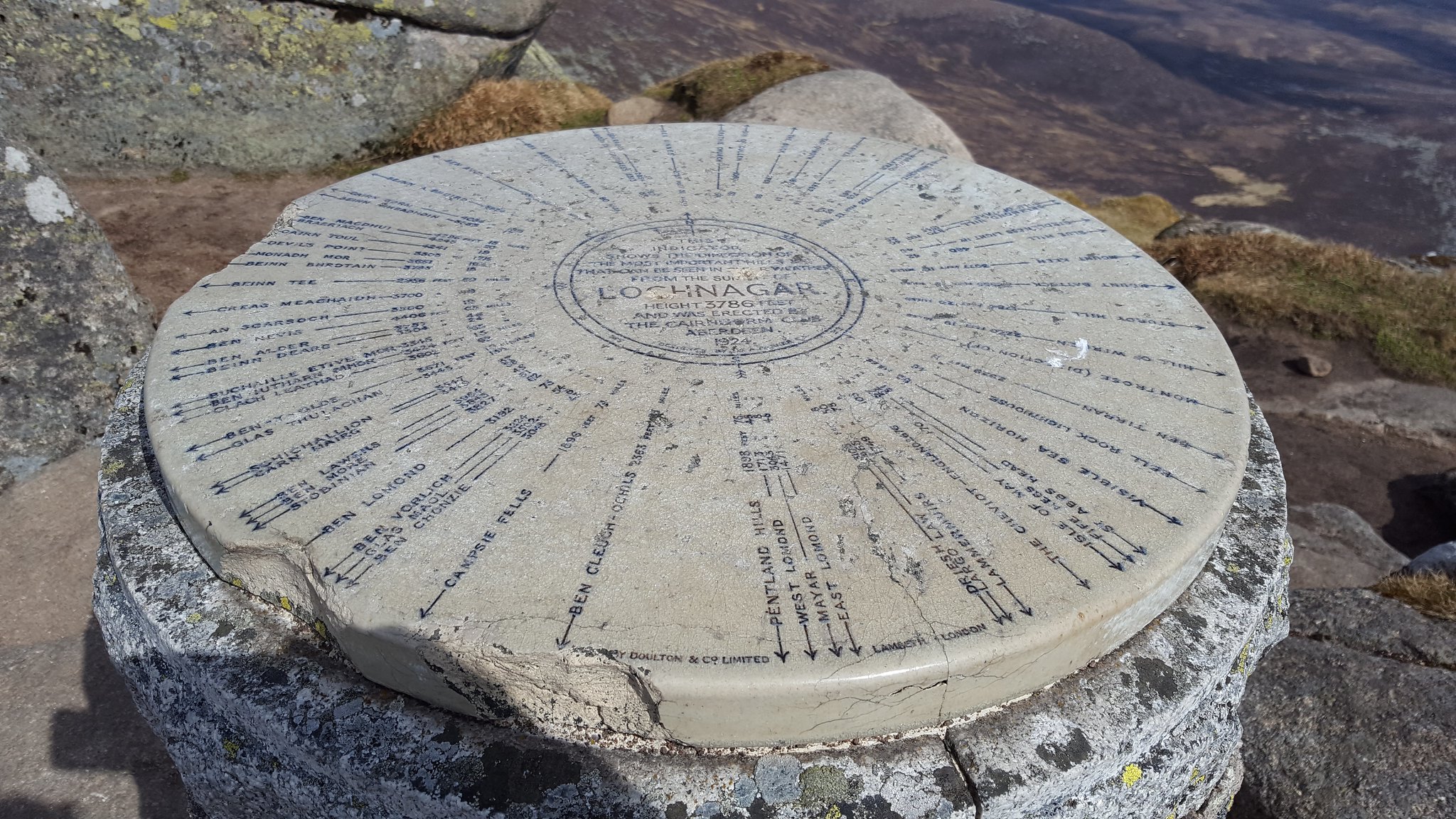 Lochnagar, the 5th and final summit of the day. 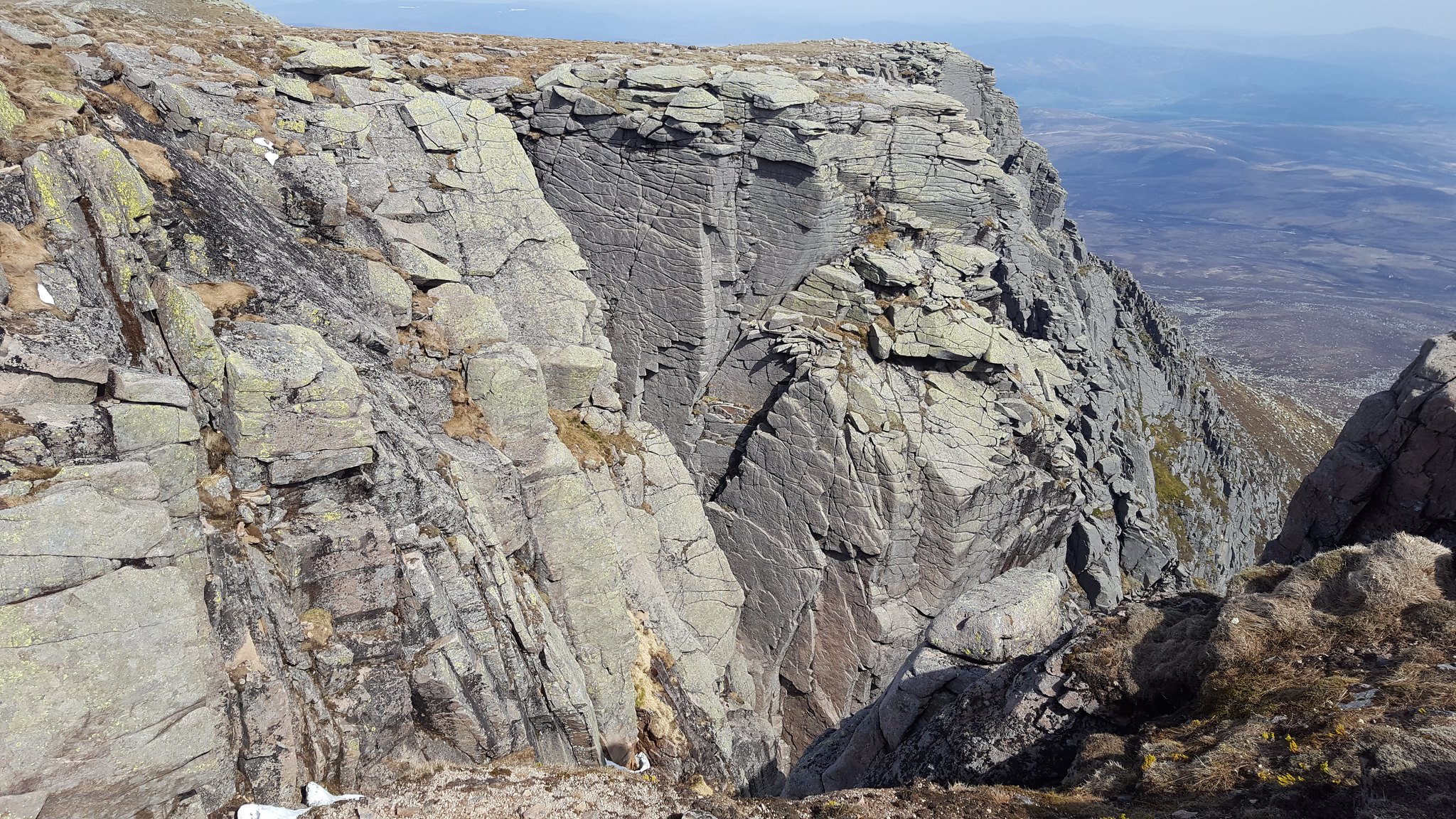 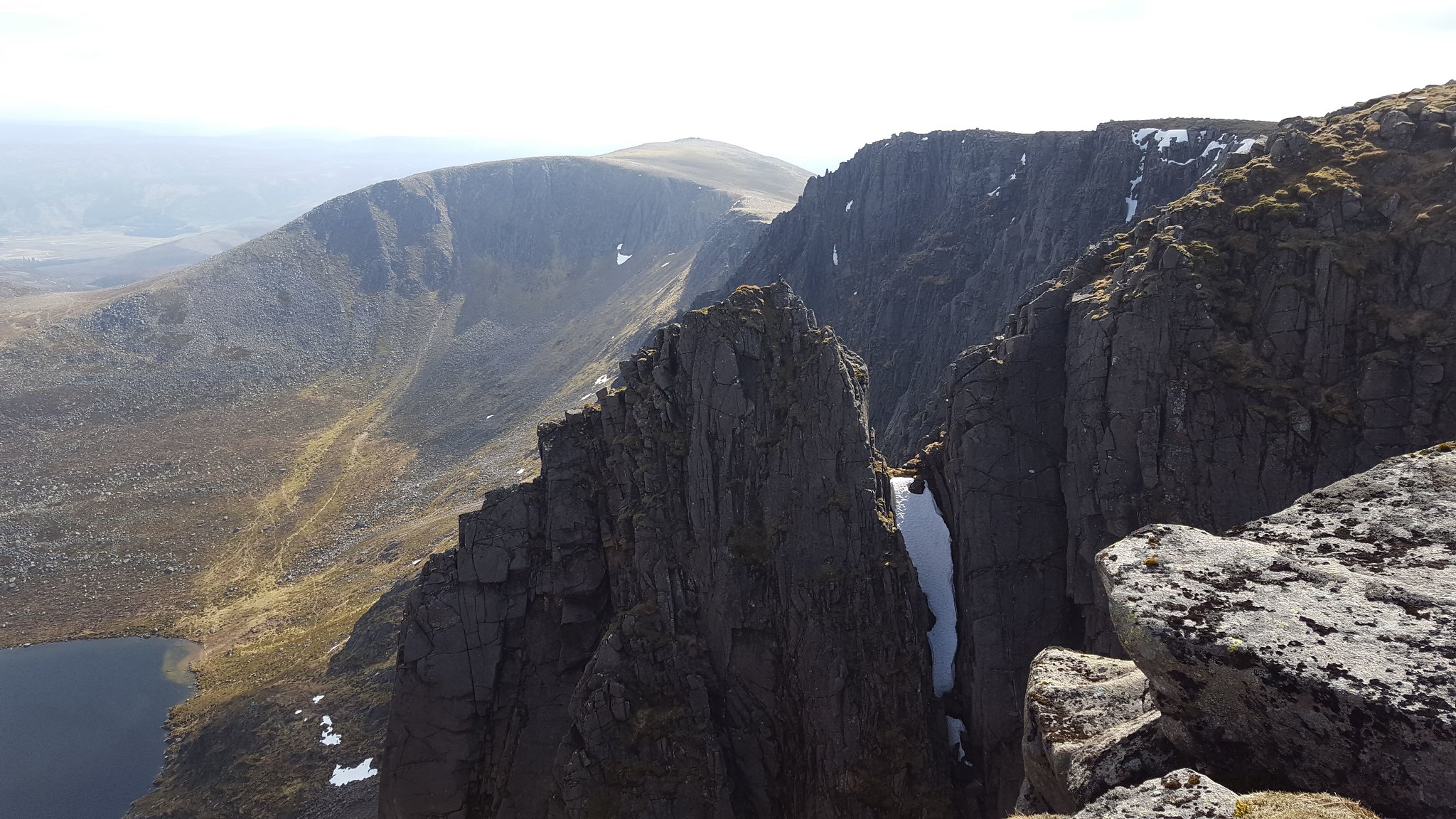 Such an impressive sight!

From the Lochnagar summit, it was then a 1hr 45 minute walk back to Loch Callater HQ, which I reached at 1.35pm. Sadly it was then time to pack up my tent and gear, load the bike, and get back down to the car and home. As always, the bike ride back down the track was bliss, freewheeling at speed without any effort at all. The final tick in the box was to stop at Glenshee ski centre to inhale some coffee and carrot cake! Job done, a brilliant couple of days. 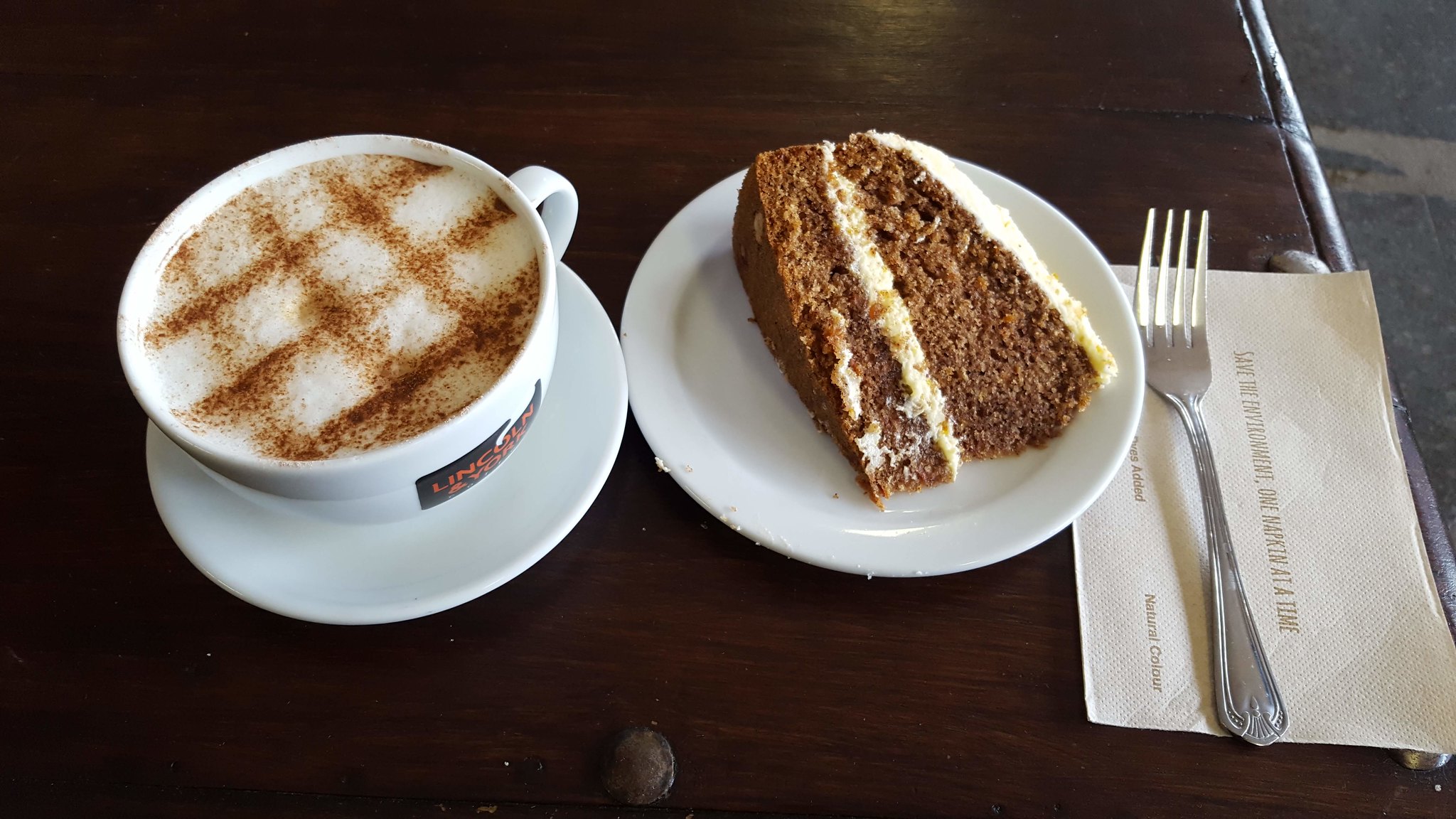 Great report, Thanks for that..
Is the bothy the last point at which you can secure your bike before heading up?
Cheers

Westie7 wrote:Great report, Thanks for that..
Is the bothy the last point at which you can secure your bike before heading up?
Cheers

Thank you, glad it's of some use. In terms of somewhere secure to lock it to, probably yes, although the single track extends along the loch to almost the start of the ascent to Tolmount. It's probably quite boggy after the end of Loch Callater though. I guess it depends what route you're taking if it's worth riding that far. I went round Coire Kander and descended back to near the bothy, so wasn't worth me taking my bike any further. Cheers 👍