The Big Scary Two near Crianlarich.

The Big Scary Two near Crianlarich.


At the beginning of September I thought I had managed to postpone three of the walks I had been chickening out of doing, till next year. And, to be honest, one year older, I think deep down, I felt I probably wouldn't get around to doing them then either. Bidean nam Bian and Stob Coire Sgreamhach, Ben More and Stob Binnein, and Ben Cruachan and Stob Daimh. I was a bit worried they would be too strenuous for me and was also unsure how my climbing buddy, grandson Matthew would cope.
However the pull of majestic Glen Coe proved too strong and a couple of weeks ago (15th Sept) along with friend Andy I (we) overcame my concerns and did SCnL, BNB and SCS.
We followed that up with the Cairnwell 3 at Glenshee, which although fine, was mainly done to get Matthew up to a guaranteed 30 Munros before winter. But to be honest, after epic Bidean, it was pretty underwhelming.
So, buoyed by our success in Glen Coe, we thought maybe we could try another of my scary pairs and we settled on Stob Binnein and Ben More. Saturday the 28th seemed to have a decent forecast, pal Andy was invited along again, and so it was green for go.
However, although the climb had been chosen, the route had not, and even on the drive up we were debating whether to tackle it from the more common direction of Benmore Farm from the north or Inverlochlarig in the south. The pros and cons of each route were bandied about, and in the end, Inverlochlarig won.
Along the quiet single track road through Balquidder and past Loch Voil and Loch Doine to a decent free carpark

that only had a camper van parked at one side. Another car pulled in just after us, but it seemed they were heading towards Beinn Tulaichean and Cruach Ardrain, a climb I had done from this car park last year. View from the carpark, early morning.

There is no long walk-in or much chance to loosen off and warm up your muscles here. It's out of the car park, cross the narrow road, over the style and start climbing It's all uphill from here!

But you do gain height quickly. 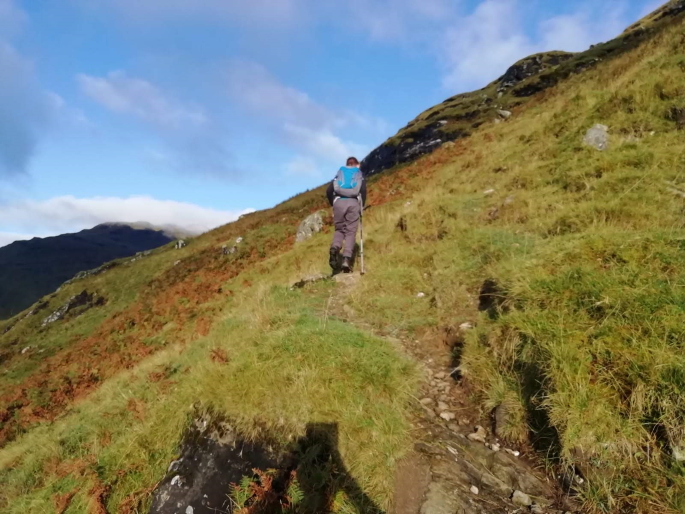 Gives a good impression of the steepness!

A look back at the car park revealed a largish group of around 12 to 15 people all setting out together, and I believe they were the only other people who did these two hills from this starting point. The weather was great and soon the two Lochs come back into view.

Matthew and Andy with Loch Voil and Loch Doine.

I was looking forward to the views when we reached the ridge that would take us North. Eventually the climb eased a bit and turned NE before a short haul took us to a cairn at Stob Invercarnaig. But unfortunately about five minutes before we reached this cairn the clag had begun to roll in and instead of a vista along the ridge revealing our first summit of Stob Coire an Lochain, we were left peering a short distance into the mist

. The temperature also dropped quite a bit, the wind picked up, and what had started as a warmish , sunny morning, had taken a downturn.

Where did the sun go?

But onwards, and a bit more gently at first, upwards. 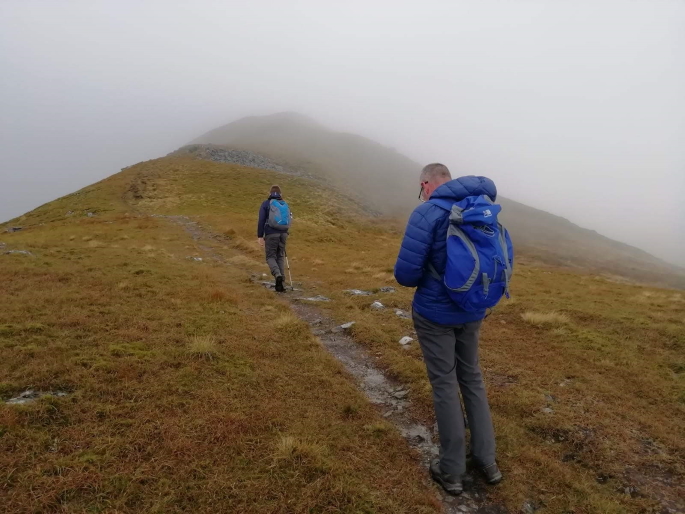 Heading along the ridge.

After a while the looming summit of SCaL appeared through the mist, but even when this was attained there was still no sign of SB or BM. Me approaching Stob Coire an Lochain.

There wasn't much point in hanging around this Munro top, so on we went, really disappointed not to be getting any views. Walking in the clag is something of a double edged sword. You don't have the advantage and stimulus of seeing your goal, but neither can you see the daunting climbs that lie ahead

So you plod on

.
At last we reached the summit of Stob Binnein, just about the same time as the largish group caught up with us, so this made for a busy top. Matthew quickly opened his rucksack and grabbed his Mars Bar, but together we decided, due to the weather, we would take some pics then descend to Bealach Eadar da Bheinn for lunch and hope it was a little clearer and sheltered there. And that proved to be the case although only the bottom part of the ascent to Ben More was visible. Eating lunch at the bealach.

After a refuel, it was off into the unknown. The summit of Ben More appears in the mist.

On and on, till we reached some mild scrambling, after which, in short time, we were on the summit of Ben More which although not deserted was a good deal quieter than Stob Binnein. Although we still had nothing to look at, it felt great to be on the summit of this mountain. A summit which I had began to think I would never visit. Over the last couple of years especially, I had checked out this mountain from other summits, from Lix Toll where it seems to rise at an angle of 45 degrees and from the north when descending from Rannoch Moor. Now I was here and in the company of 11 year old grandson Matthew. That made it twice as sweet. This was Munro No32 for him. Not too bad from a start of 10 at the beginning of summer, especially given the limited time we have available to climb. Some more food and drink, pics and it was time to make our way back to the car.

Me and Matthew at the trig point. The three of us, Ben More summit.

One of the problems with the route we had chosen was that a decision would have to be made when we returned to the bealach. Should we return as we came and re-summit Stob Binnein or take what appears to be a pathless descent south-west and pick our way along till we could find the track in Inverlochlarig Glen that would take us back to the car park. However, our minds were made up when on nearing the bealach the clag briefly blew away and revealed the track to and from SB's summit

. So downwards it was

This route was not without it's problems though. 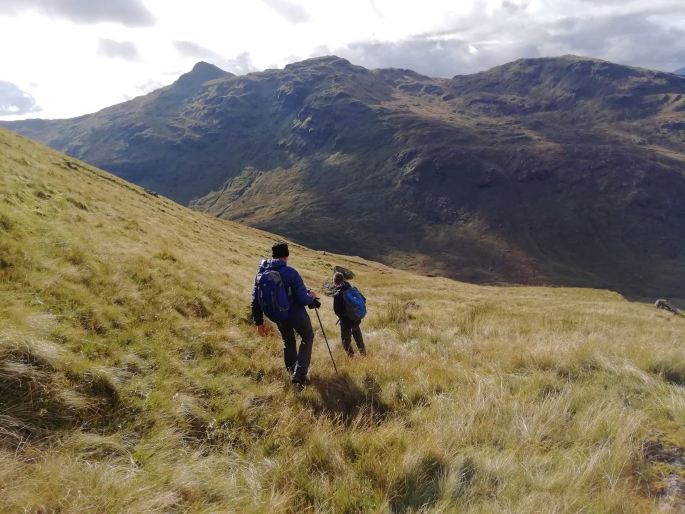 Beginning the descent down to the watershed.

Traversing downwards, picking a path through the wet slippy long grass with hidden water courses etc was not easy, but we eventually reached the valley floor.

The sun is back out at the lower level.

Looking north on the descent to the valley floor.

We made our way along the floor which, unsurprisingly given the amount of rain that fallen recently, was incredibly boggy. Along the valley floor we go, trying to avoid the worst of the bog.

At one point my left leg went down a hole to thigh level and I "hands and face planted" myself much to the amusement of Matthew and Andy.(There is a video available

).
We had trouble finding the beginning of the track and Andy must have walked twice as far as Matthew and me trying to pick it up. Could have done with a drone!! But find it he did. And that left a straightforward walk back to Inverlochlarig. 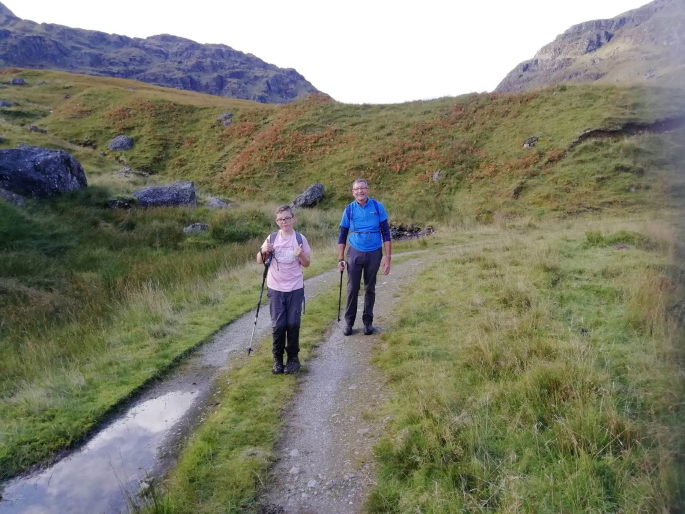 Mission accomplished. And after last weeks 4 hour dash at Glenshee, it felt like a proper climb again. And we had done two of my scary pairs in the last two weeks

., but I think Ben Cruachan and Stob Daimh may have to wait till next year

.
A little story to finish with. As we passed the farmhouse at Inverlochlarig, an elderly gent came from the house towards his car and during a quick chat he told us that shortly before our arrival a man had turned up at the house believing he had returned to Beinglas, which is where his car was. Ooops

? I think his son ran him to Balquidder and told him to phone for a taxi

.
PS. Distance and Ascent are estimates based on the profile and previous reports.