Just a quick recap, and a few photos to get this one doc’d before I set off again (by the time I return home, I will have forgotten all the details!

We set off at 8:30am. I’d already regaled Jimmy with the tale of my first foray up these hills, with Evie a few years ago, on the infamous “MWIS 90% chance clear summits, beware sunburn” day. After enjoying an impressive inversion from the top of Stob a’Coire Odhair, we descended into the clag on the descent to the bealach, and stayed in the clag until we were well down the descent from Stob Ghabhar. So much for the much-vaunted views of surrounding hills and across Rannoch Moor!

But today! Today, we had sunshine and a clear blue sky. The morning light was lovely, with the clarity that often accompanies settled autumn days. It had been cold overnight; we’d needed to scrape the hard frost from the cars before we set off. 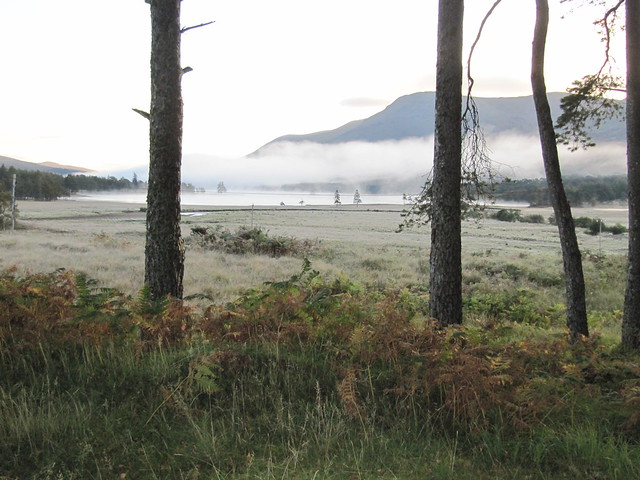 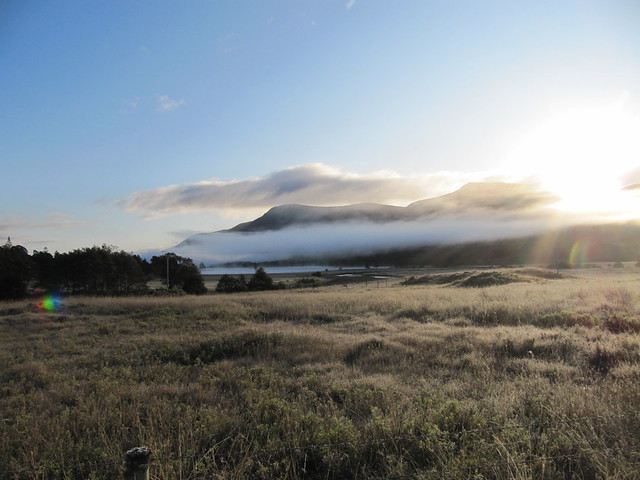 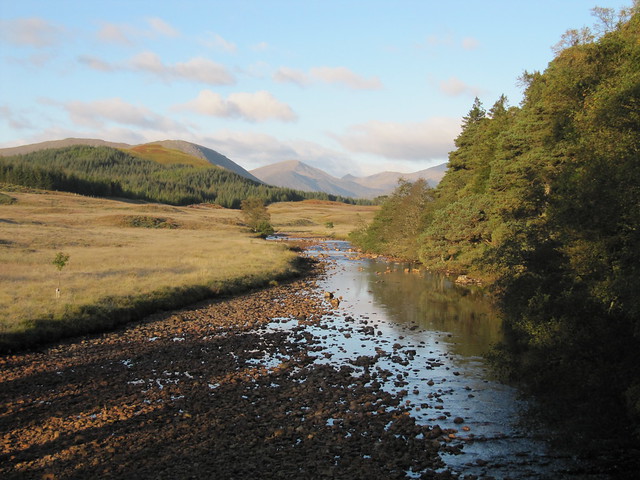 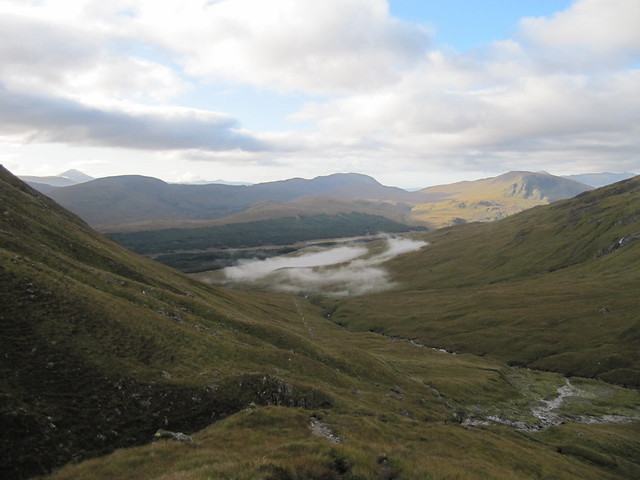 looking back down from the zig-zaggy stalker's path... 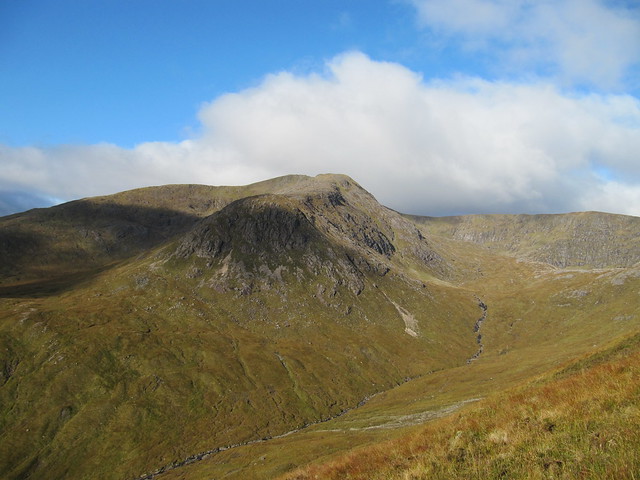 ...and across to our second target, Stob Ghabhar 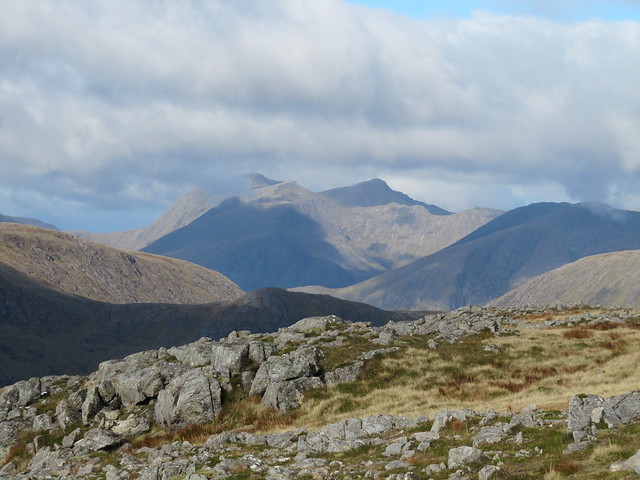 We reached the summit of Stob a’Choire Odhair in about 2½ hours, I think. This time, we DID have that glorious view across Rannoch Moor; Loch Ba, Loch Rannoch, the A82, and the WHW spread out before us. We sat for a few minutes, having a bite to eat, and were soon joined by a woman on her own, and a couple a few minutes later. 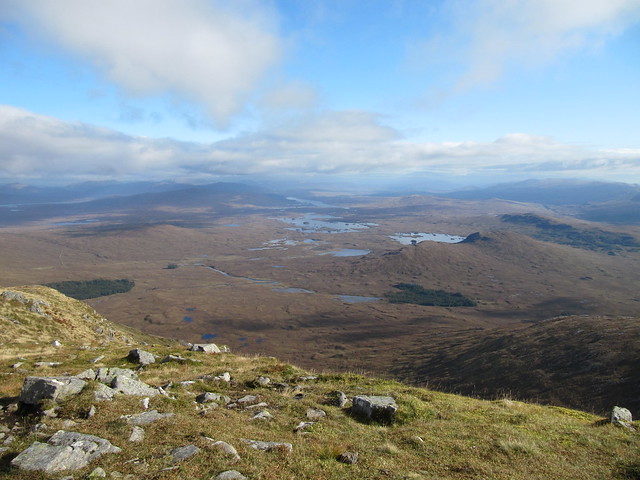 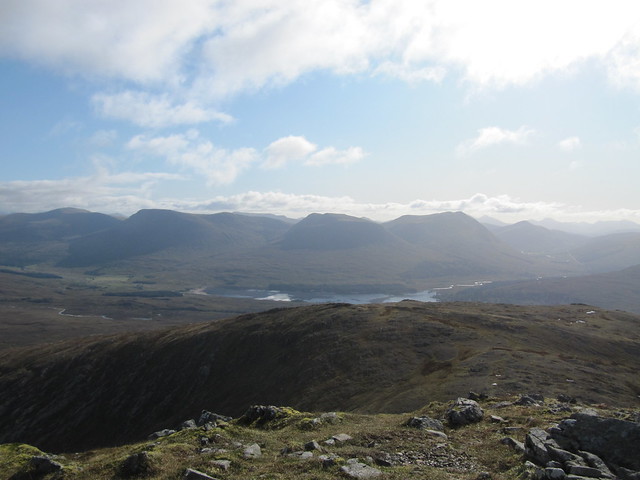 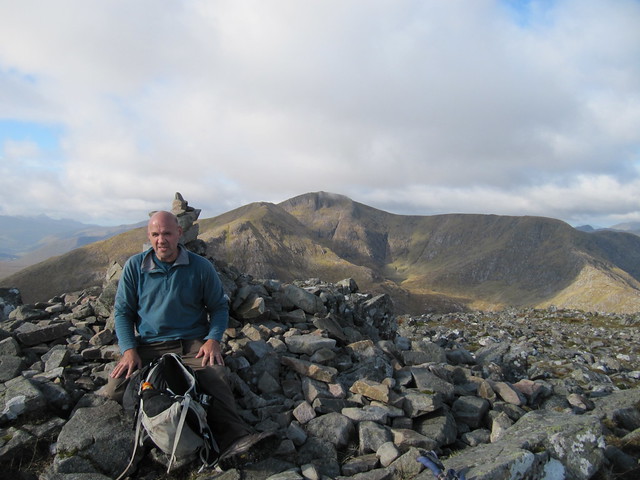 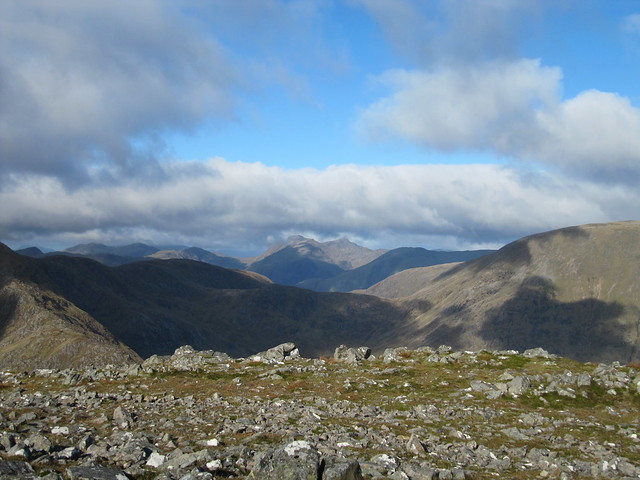 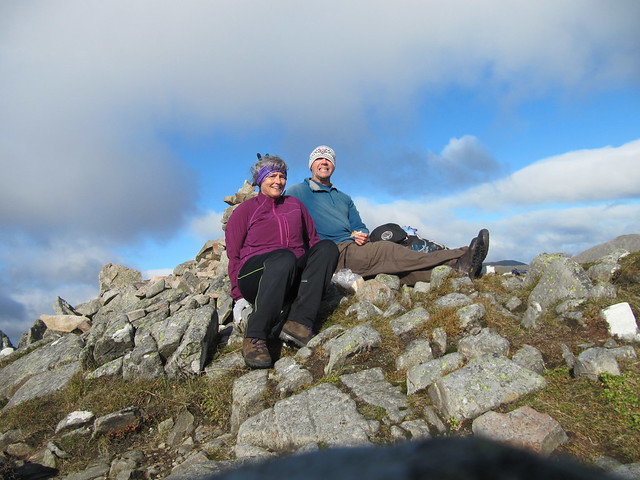 It was quite a drop (~300m) to the bealach, and then the steep-at-times, scrabbly-at-times, both-at-times bits that I clearly remembered from my previous trip. (What I actually remember was Evie saying, “I *really* wouldn’t want to have to come down this!” And Jimmy agreed.) 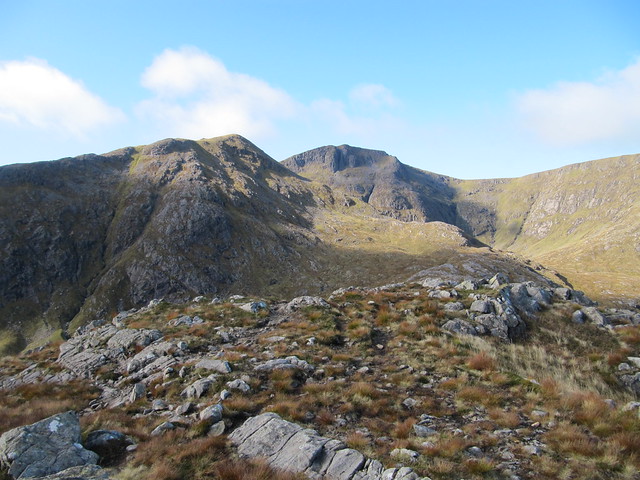 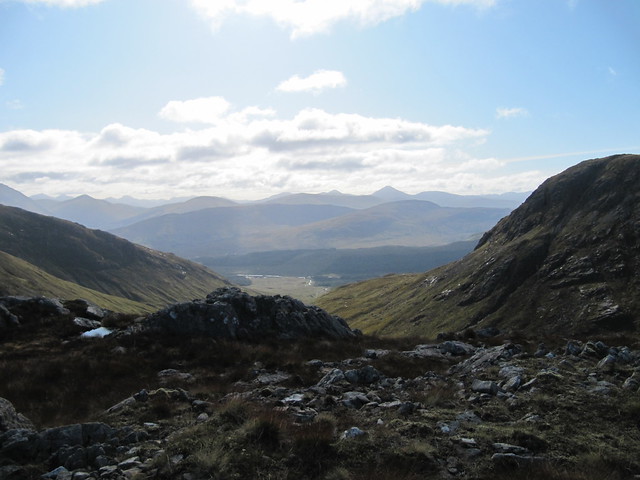 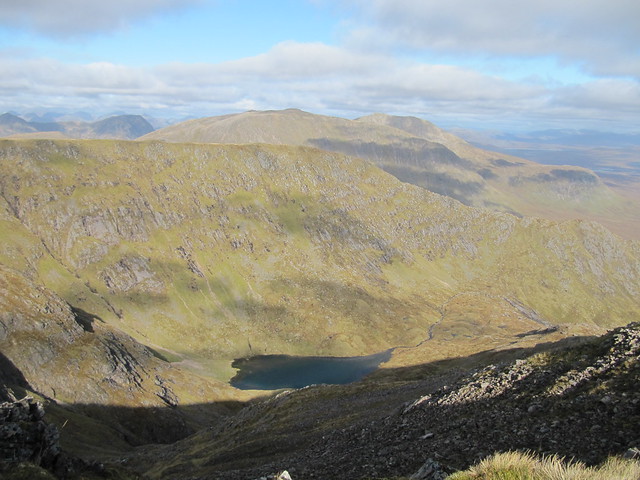 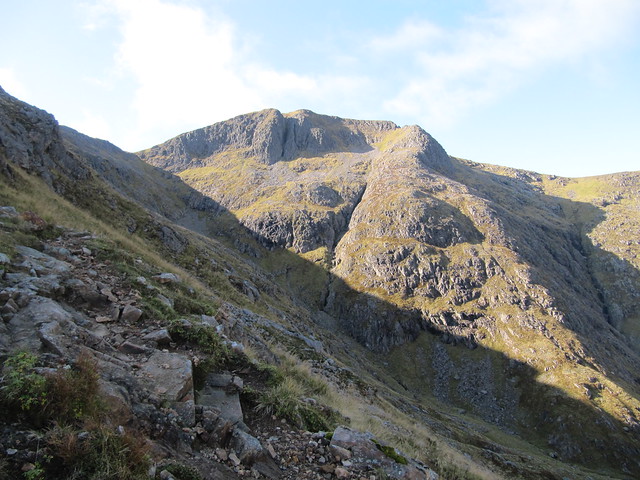 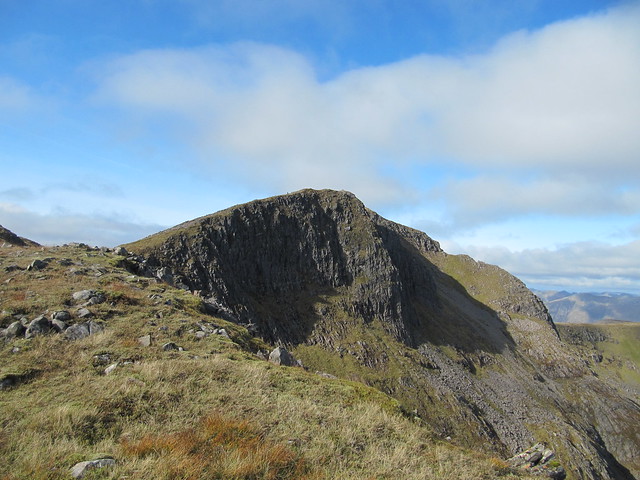 We had a brief sit-down once we’d reached the ridge, then carried on along the (baby) Aonach Eagach, and then to the summit. Although there were a few clouds around, we still had amazing views to the surrounding hills and (still) to Rannoch Moor. Our descent route was clear below us as well. 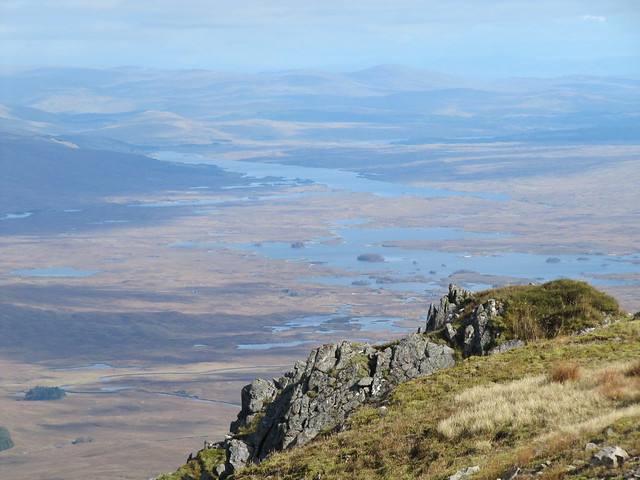 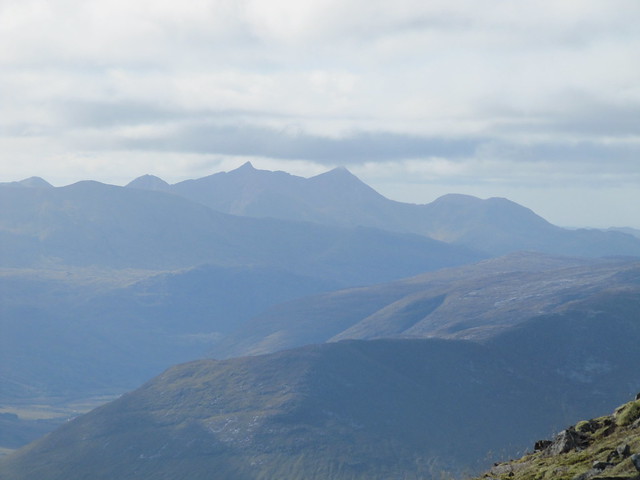 I think the pointy ones are the Cruachan hills 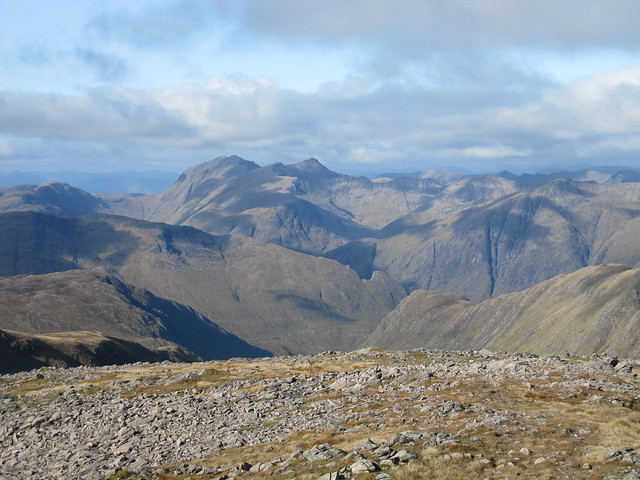 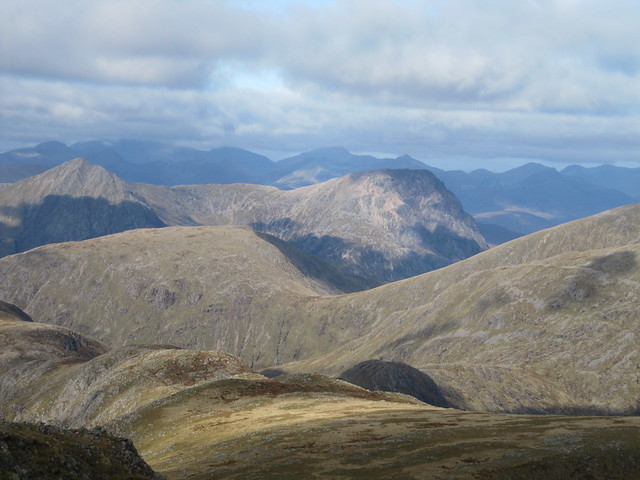 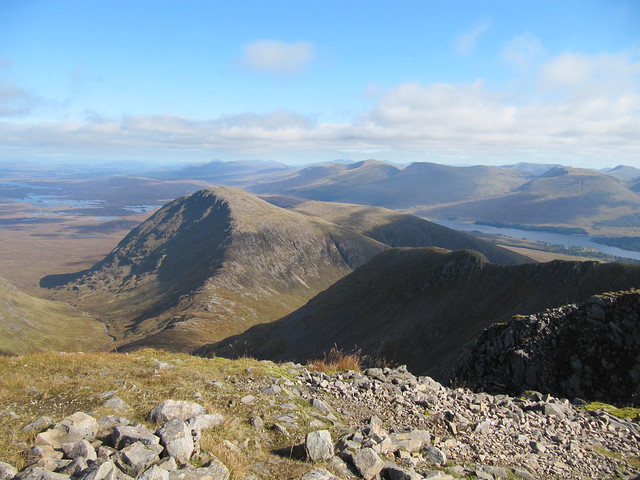 looking back over what we've done, and our first hill, which looked tiny! 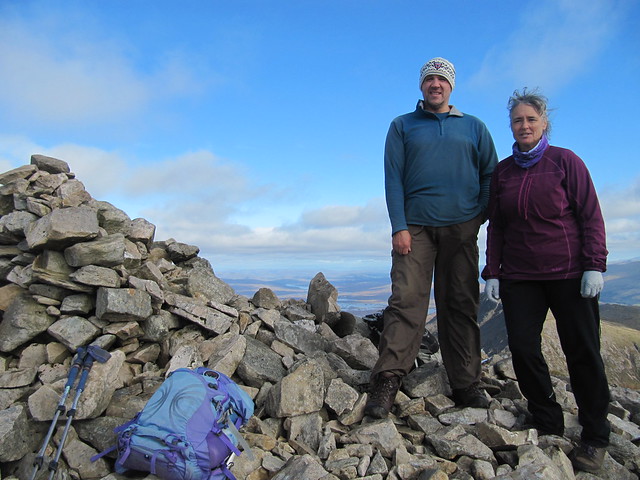 It was a very long descent; I seem to have (selectively) forgotten this. But we eventually made it down to, and crossed (without incident), the AlltToaig, and picked up the good path back to the wee green hut at Clashgour. Finally, the march along the road back to the car park, which we reached at 4:15pm, and from where we parted company—Jimmy to head north for more tidying up, and me south to get home before dark.

I’d waited a long time to do these hills a second time, and they were well worth the wait!