Had been somewhat nervously watching a good spell of weather forecast for up Torridon way, surely waiting for it to evaporate as the time drew near. Remarkably for September, things stayed very hopeful, as I belatedly made plans for hills and arrangements for some accommodation for a two night trip. Yes, my wife is the best!

Opted to try to get one of the "out the way" one's after my drive up, hopefully get Beinn Eighe and something else on either remaining day, subject to weather, fitness, etc. Things had turned a bit murky and windy for the Thursday, so despite my early start, I was in no great rush to get to Achnashellach, with things forecast to improve as day progressed. I think it is common to miss the Craig car park, so I merely continued the trend. Not a sign in (my) sight! A further five minutes up the road and I knew it was time to turn around. Drove past it again, on my right, but spotted it and after a further three point turn, was soon back at the correct start point. What a bog that is!

Anyway, got the bike and gear ready and was soon on my way, crossing the road and railway line. Also, soon realised things were not going to be great with the bike today. My oldest, Coll, had punctured mountain bike and not repaired it. Bad boy, Coll!

My hybrid seemed a bit lightweight for some of the track and due to lack of maintainance, only had three gears to play with. Silly boy, Dad!

Fortunately, they were "good" gears and didn't impede me too much.

Having crossed the River Carron, it is quite a steep haul up the forest road and eventually, well, actually fairly soon, I resorted to my old habits - pushing, instead of pedaling

Kept another guy company for a bit and enjoyed the bleathers. He was heading for Sgurr na Feartaig, but we couldn't see much of it. The hills were still low in the mist at this point, but one sensed they were there alright. Once things had leveled out, I got back in the saddle and made decent progress along the glen, passing a couple of wire bridges along the way.

As prescribed, ditched the bike, not far past the plantation. Still couldn't make out any features of the hill, but crossed the burn and made my way in the general direction of the burn. Perhaps, should have paid more attention to line,as I drifted too far to the south, resulting in a fair bit of gnashing of teeth, as it was hard work getting back on track. In fact, from where I was, it looked nicer and much more appealing to head up via the ridge, Fuaran a' Bhuilgich! Whether this has been done, or how viable it would be I don't know, but maybe next time Decided to stick to script and as the script says, it is tough work heading up the next few hundred metres of grass, heather and boulders. Deceptively tough and was very glad when it began to level off a bit, especialy as the mist was clearing and beginning to reveal a bit more of the surrounds and into Fuar Tholl Mor corrie. That's more like it! Lovely. The legs were still pretty tired as I made for the cairn at Carn nam Fiaclan. Met a guy there, but didn't seem the talkative type. He appeared from the west, so maybe he came up the way I had thought about? Early view through the mist. The ridge to the right is the one I was considering. The dumpling left of centre is the one I went up. A steeper dumpling than it looks, perhaps. Nice colours of Lochan an Fhuar-huill. Still misty in the corrie. 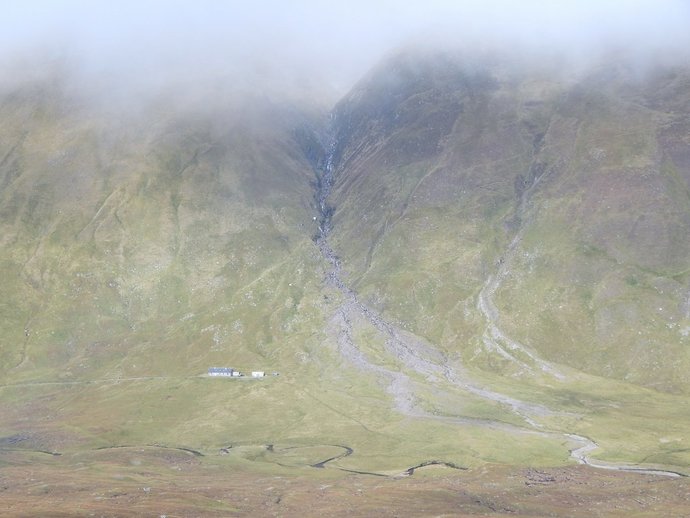 Back down to Glenuig Lodge, beside the impressive looking cleft of the Allt a' Chlaiginn.

Wandered around the head of the corrie to Creag Toll a'Choin and got one, or two pics down Loch Monar and surrounding hills. Decided not to intrude on the couple who were enjoying each others company and soon moved on to the 'other' summit. Few more pics and then off down the stony ridge to the falls at the base of the corrie. The quiet chap was well ahead and opted to follow the path on the high ground to the right of the waterfalls. It certainly looked the way to go. For once, I ignored 'looks' and kept to the suggested route here, west round to reach the crossing point on the Am Crom-allt. It was boggy, but I didn't think it was too bad. Fuar Tholl Mor corrie, across to the Allt a' Chlaiginn. Sgurr nan Ceannaichean, left, with Liathach above the mist. Back down the glen.

From here I declined to try to follow my steps over the bog in the direction of the trees, instead tried to find tracks towards Glenuig Cottage, but I was soon darting round, over and through bogs. Despite this, I made it to Glenuig Hut, well before the other fella, who had been moving faster than me, so I had probably made the wiser choice. Soon made it back to the bike and enjoyed a much easier ride out, than in. Despite that, I was pretty jiggered and very much enjoyed my shower at Gerry's, before heading to Strathcarron for a pint and some footie! Sgurr nan Ceannaichean and Glenuig Lodge on the descent. Moruisg, from the less seen side. Altogether a great bike hike. Maybe not best of hills today, but still some decent views. Thereafter, another interesting night passed at the hostel, but that as they say, is another story!