Conival & Ben More Assynt - this time I made it!

Conival & Ben More Assynt - this time I made it!


It was my third time in a row that I parked my car at the parking of the Inchnadamph Hotel. Even two days ago I would not have thought to be back so soon if at all to go for the Assynt mountains again. But due to a broken gear on my roadbike and the good weatherforecast it would have been a shame if I had missed this chance on my last day of my summer holidays.

Here comes a little excursus because the story with my broken bike is just too good to leave it out: I did a ride from Inchnadamph over Elphin to Drumruni where I turned right to follow the raod with spectacular views along Loch Lurgainn and Loch Bad a' Ghaill. At the junction of Badnagyle I continued following the road straight ahead for an extra bonus: a lovely loop over Achnahaird, Reiff and back to the juncution over Achiltibuie. At Strathan, only 20 km from the parking, I made a picture with my bike at the place-name sign.
In Strathan, in Octobre the year before, I had a puncture with a rented car just in front of a barn around 4pm. Rain, no signal, worn out adapter for the security screw of the alloy - I was desperate. After a while Donald came looking who was blocking his barn with a terrible huge Vauxhall Moxa europcar has given me despite my protests! A Moxa for the roads in Sutherland! and without much practice driving a right hand car I persisted on a small car according to the contract, but in vain. All the silly discussions ironically accompanied by the silent slogan behind the counter: Europcar moving your way

Donald tried to help but without success and then he offered me to come into the house to do some (annoying) phonecalls with europcar and so on. Jean, his wife, served coffee and cockies, and later a delicious soup - I am still in trouble to find words for their caring helpfulness!!! THANKS again! When the breakdown service from Tongue finally arrived it was around 9pm!
So far for the history, now back to my ride: After I have taken the picture I resumed my ride, I switched gears, an unpleasant cracking sound followed and paddling became impossible. First I thought my chain has gone off but than I discovered the broken derailleur. Last pic before the breakdown - very enoying because the complete gear, cassette, chain and everything has been changed only a few weeks ago

So I went up the little drive towards the Farmhouse of Jean and Donald who I have visited only four days ago. The gate was already closed and the dogs were barking and first Donald didn't recognized me in my bike clothes. One of the dogs had to be put into the car, the other was greeting me friendly and I told my story. We were laughing about that unbelievable coincidence and again Jean and Donald helped me and called a friend who took me and my bike and brought me back to the parking at Inchnadamph. So then, see you again, next year, Jean said, when we said goodbye. Of course, how couldn't I, plans are already in progress.

And now I was back to the parking the next day for the third time just like the german saying: Alle guten Ding sind drei (not sure how to translate this).
The first time I had to turn around at Conival due to nasty weather (https://www.walkhighlands.co.uk/Forum/viewtopic.php?f=9&t=92386) and I was not too enthusiastic about the perspective of the long way through the valley with its muddy places and up the steep ascent over scree and boulders, however there was no real alternative for my last summer holiday, I think

. But the sunny summer day with blue sky, the pleasant temperature and the nice views towards Suilven and Canisp as well as today's destination made it easy to get over my reluctance. When I arrived at the parking around 11:30am I was lucky because there was only one place left! and next to me a walker who already had finished his walk was packing his stuff back into his car.
Despite the cars I only met two girls half way up the valley coming down with their dogs and another girl sitting in the sun not intending to go further up. When I have reached the stoney path I saw another walker coming up but he was still in the valley. Although he was not running he was catching me up on north ridge short before the last pull over the rocks to the summit of Conival

When I reached the summit of Conival I hardly could imagine that it was the same place where I was two days ago but the cairn with its disctinct shape convinced me. Summit cairn of Conival with views towards Loch Assynt and the sea beyond, Ben Uidhe and Glas Beinn to the right

What a difference! The views had been a great reward for taking the effort to come back again. May be it's Dubh Loch Mór The impressive buttresses of Na Tuadhan The ridge towards Ben More Assynt

Once at the summit I saw plenty of people like little dots on the ridge either still heading for Ben More Assynt or coming back. The view towards the ridge to Ben More Assynt was quite intimidating, and with a sigh I was watching the little parties, families with children and dogs, scrambling along - usually I am always excited about ridge walks but now I was missing the energy - after three weeks of walking I obviously have become quite tired, finally

When I reached the summit of Ben More Assynt the last partie was just leaving. A few minutes later the walker who has passed me was caming back from the Top behind Ben More Assynt. We had a little chat again but soon he said goodbye and I had the summit all to my own. Sunshine on the summit of Ben More Assynt

The sun was shining and behind the cairn towards the south I found some shelter from the wind. I enjoyed this break very much and the great views all around. Giving my muddy feet a decent rest and enjoying the views. 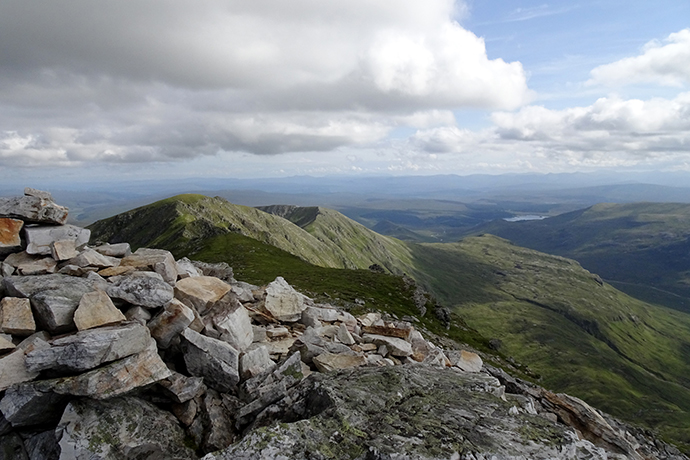 another great picutre towards the North; the single cone should be Arkle with Foinaven behind, Ben Klibreck again to the right.

Finally I got up and began the long way back, very glad that didn't need to hurry. . I realized it only after I have managed the descent down the crags and I couldn't be bothered to go back. I thought it couldn't be too difficult to go across the scree and find the path - mh

to make it short: I struggled a lot and it took me what still seems ages to get to the path. I only was glad that I always could see the path down in the valley at least and I was very happy when I saw the first cairn telling me hello! welcome back to the track. thanx for the little cairns, they are very helpful and it was a great relief to see them again!

It was quite late when I finally arrived at the parking wondering whether there was any chance to get a little supper on my way back. There was nothing much I would pass and it was too late to drive to Lochinver or even Ullapool which I have considered if I had been back earlier. So I stopped at the Altnacealgach Inn were I had a Lager and a nice soup which brought back some life, I was really tired meanwhile! When I left the sun was going down behind Canisp so I took another picture of this beautiful scenery at the end of a lovely day. Suilven and Canisp from Loch Borralan

Reaching Lairg I caught a last sight of the two mountains with a nightcap in the glowing light of the sunset. It was dark when I arrived at my hobbit house and I must have fallen asleep at once, I can't remember anything else.

did I take a shower? Happily back at Loch Shin Pods Somehow I missed this WHR first time around - but good to catch it now. Assynt is one area I still dream of (but haven't yet visited), and your pics - especially the really stunning ones a) of Canisp and Ben More Assynt with flowers in the foreground, and b) Suilven and Canisp from Loch Borrahan. The pic of Ta Tuadhan (which I'd never heard of before) is also amazing - both the pic and the face.

Pleased that you had good weather for this excursion - It's a bit of a bummer when one travels a long way just to get mist and rain!

PS "Alle guten Ding sind drei (not sure how to translate this)". There's definitely an english idiom very similar to this, but I can't just think of it now. But the literal translation - "good thing come in threes" - is very clear to an English speaker.

PPS I shudder to think of the force you must have been putting into your bike to bust the derailleur...

Alteknacker wrote:PS "Alle guten Ding sind drei (not sure how to translate this)". There's definitely an english idiom very similar to this, but I can't just think of it now. But the literal translation - "good thing come in threes" - is very clear to an English speaker.

Thank you, Alteknacker, I am happy that you liked reading the report

. I think the translation fits perfectly! I'll keep that in mind!

Alteknacker wrote:PPS I shudder to think of the force you must have been putting into your bike to bust the derailleur...

The last days of my summer holidays I spent in Keswick and I was lucky to get my bike promptly repaired at the www.kewsick3bikes.co.uk. The mechanic said that the broken derailleur was very unusal and quickly he saw the problem: the chain was too short! Back home I made my complain but the mechanic over here is defering the matter and does not want to take responsibilty for the unfitting chain

Quite a story, Grisu. Donald and Jean sound the very personification of Highland hospitality; what a lovely couple

It's good that you caught some nice weather for your day on these hills - I'm envious! You got some great photos. Like Alteknacker, I've never been to Assynt, so it's nice to get a little taster from your report. It looks fantastic and I look forward to going there one of these days!