Day 2: probably not the way to do Sgurr na Sgine.

So we headed up the well worn path to the corrie below Sgurr na Sgine, and then decided to take the slightly more elongated route up to marked on the may to the belach between Creag nan Damh and Sgurr a' Bhac Chaolais, then follow the wall/ridge line towards Sgurr na Sgine. All lovely so far. However the path up to Sgurr na Sgine soon vanished and we were faced with a very steep scrample up a scree gully or a hike to the west to like the western rigde. In the end we opted for inbetween and climbed the very steep grassy slopes between those two option. A right calf burner.

But at the top, the great weather afforded good views 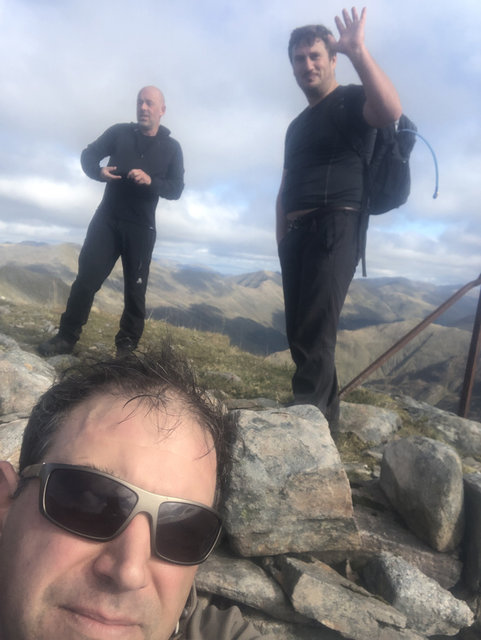 We then picked up the natural track along the ridgeline dropping to the lochen below The Saddle.
The route up following the oddly placed wall along the southern scree slope. There's no doubt the Forcan ridge would be a much better approach but with the pup I figured it was safer for now to keep things simple. To return we again avoided the impressive Forcan ridge by dropping down the unmade route in the corrie north of the ridge, which was unpleasant but then picked the main route up again before the start of the Forcan path to start the slog back out. Nice

View back up to the Saddle and Forcan ridge