Only a short catch-up walkreport just for the record, very much motivated by the lovely report of andrew11. And like Andrew's first my walk led me right into the mist, too.

After a fantastic start of my walking season with great views in the Lawers the day before I was now heading for my third Munro with bleak prospects ref the weather. However, when I started walking it was dry, the temperature was quite pleasant acutally, and I hoped that the mist might disperse at least partly. It didn't look too bad at the beginning and I enjoyed this silent part of the walk pretty much, nevertheless.

I took the usual route from the parking at Braes of Foss. Unfortunately I could not spend any coins for the parking because the machine was not working Thinking about it now, I'll make a donation to the John Muir Trust instead - they do such a great work, really! Only poor views over Loch Tummel with a hint of Beinn a' Ghlo which was my following walk three days later again in sunshine.

At the section with the quartzite boulders I got a little bit lost. 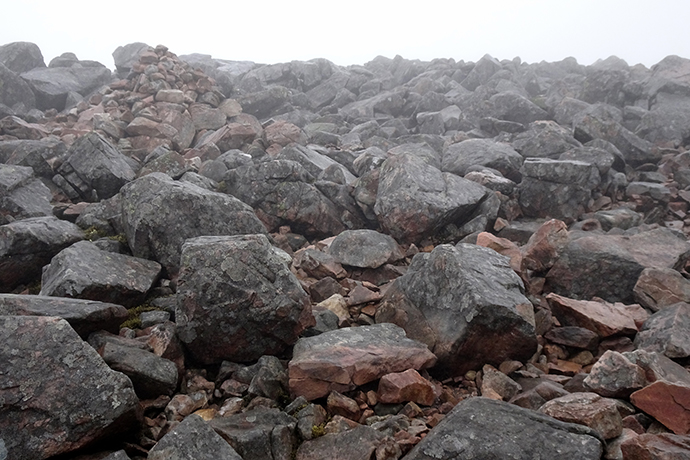 Only when I was very close I discovered this cairn.

I tried to follow the two walkers who have appeared out of a sudden in front of me but lost them out of sight again due to the thick mist. 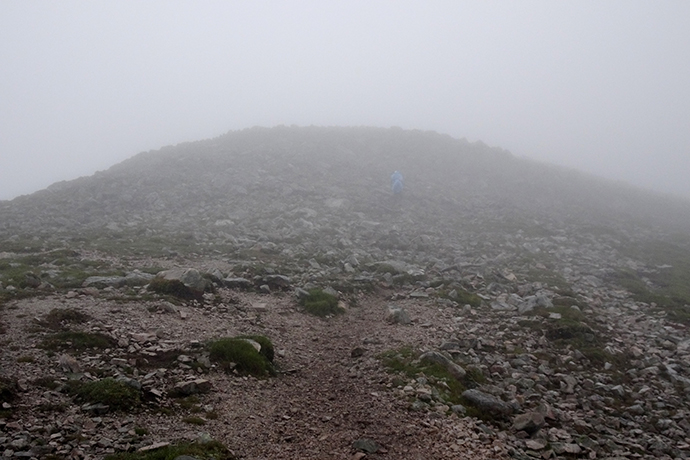 The Slog over the boulders in the mist was not much fun.

When I was at the summit, you could have told me anything where I was - I had no idea! And still I struggle to recognize Schiehallion. I only saw it in clear sight from Am Bodach for the first time but that was in the next year 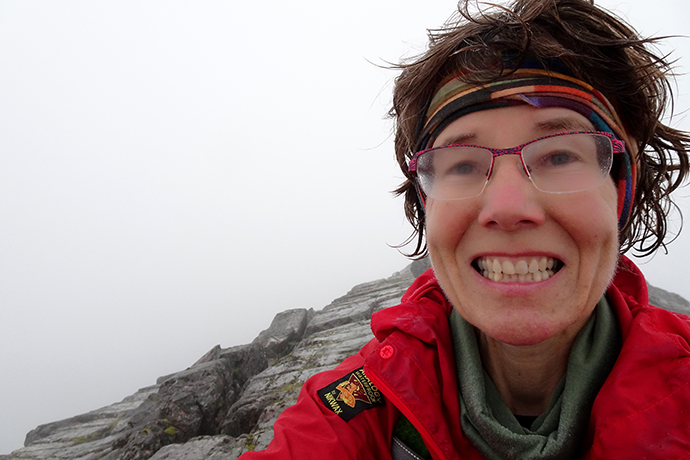 Soaked by the mist, almost blind and no rewarding views at the summit - what am I doing?

I only took a short break and joined the two walkers I have seen before and met at the summit.
The descent over the ridge was much easier because now I could see clear traces of a path which made walking a bit more comfortable. Still it wasn't easy to keep on the track because it was fading in and out of sight. Further down the views have only slightly improved. It could be Gleann Mor guessing by the map but I am not sure at all. It certainly is a nice place to have a rest and enjoying the views - if only the weather ... I couldn't find the translation for sheepfanks mentioned in the description, I wonder whether it refers to these remnants.

Short before I reached the parking it started to rain, well then - I won't be able to return in 50 years

but I surely will come back for the views, cheers andrew11. I've never had a view from the summit of Schiehallion either, and I've done it a few times. It's surprising how often the summit looks better when seen from other hills.
Glad you had a good day again, despite the murky weather.
The sheepfanks are just a simple enclosure for sheep - usually for shearing time, and you were right, that's what you saw in your photo.

katyhills wrote:The boulders are quite rough to go over - much easier in the snow

SNOW - I am far away from trying this at the moment, mainly because I have no easy access because of the place where I live, but surprisingly some thoughts about it popped up already during the last weeks

I think the English for fank is sheepfold! (In the Lake District you also get bields, but I think those are different...)

Haha, the path really does disappear a good bit before the summit! The good part is that Schiehallion is such a lone hill that as far as you're still going up, it's impossible to get lost...

nigheandonn wrote:I think the English for fank is sheepfold! (In the Lake District you also get bields, but I think those are different...)

Thanks for the information - the sheepfold in the Lake District look indeed different, I have seen plenty of them on my walks over there (warm up for Scotland

aaquater wrote:Haha, the path really does disappear a good bit before the summit! The good part is that Schiehallion is such a lone hill that as far as you're still going up, it's impossible to get lost...

For some reason this Munro is the one that I wish to keep for my last. I don't know why other than my favourite beer is Schiehallion which may have a big something to do with it

Glad you enjoyed it and thanks for sharing.

Behold Scotland wrote:For some reason this Munro is the one that I wish to keep for my last. I don't know why other than my favourite beer is Schiehallion which may have a big something to do with it

That's a nice idea, I like that Lager, had one or two in the evening in the Schiehallion Hotel in Aberfeldy after my walk

Think I saw even less than you the last time I was up here a few years ago in the rain - my better half came with me that day and remember trying to dry off back at the hotel in Fortingall. Much better weather the first time - but then it was 1987 and the weather always seemed better back then