With weather and appointments apparently ruling out any walking for me over the next week, a good forecast on Monday saw me hazarding the Edinburgh bypass morning rush hour, and for once without much delay. For variety I took the A68 to Jedburgh then via Bonchester Bridge to the B6357 on my way to two Marilyns I had still to climb. At which point I met a sign of what could have been a serious problem. If the road closure was within a mile of two of Newcastleton I would be okay. If it was nearer to my present position I might have to backtrack and take a long diversion. Groan! What gave me hope was that my car's SatNav which does get some information of road closures and other delays seemed happy to continue. So I did. I met the Road Closed sign just as I parked to beg1n my walk to Larriston Fells. Phew!

Though the sun had been shining as I drove down the A68, low mist covered the Newcastleton Forest as I walked up the track. Note that some of the photos - those with sunshine - were taken later on my descent. After three kilometres I passed three foresters busy spraying. One was about to refill his back pack, stopped for a chat, and explained they were killing off the grass to give the young trees a better start. After a useful chat about my next target, of which more later, I plodded onwards and gently upwards. Foresters spraying as the clouds clear on my way down Out of the forest - mast in view The end of the track

I reached the end of the track at the radio mast after 4.7km and just over an hour. The expected ATV track was found by walking past the left hand side of the compound. I managed to follow it the several hundred metres to a gate in the fence. The fence and its gate from the 'path'

This coincides with the end of the wall. On the other side a narrow path led in the right direction for the trig point. I followed it over a knoll with a low pile of stones on its top and continued through the mist to where it eventually faded away and left me to plough through vegetation to the trig point. I think I should have turned left. at the knoll Looking back from the knoll with trig point on the right bump and cairn with path to it on the left. Closer view of cairn with path more distinct, but not by much!

On my return in clearer conditions I could see a path heading from there towards a cairn on the ridge which would very likely have continued to the summit. At the trig point the mist appeared to be clearing so I stopped for a snack, but it was taking its time and not making much progress so I started down. Back on the track I walked around the concrete oval that lies a short distance from the mast. It's a 9m wide track with a length of about 140m - a bit short and remote for a racing circuit and oversized for a turning circle. Some short posts may have once supported lights, but what it was for is a mystery. As I descended the cloud dispersed and the views improved. I took a photo of objective number two - Blackwood Hill. Blackwood Hill - my next objective

There I could see it had changed. A large chunk of the forest shown on my map was now missing from its ridge.

My starting point for number two was a short distance back up the B6457 I branched left at Steeleroad-end onto a minor road to a forest road where I had originally planned to park. Acting on information received from the forester earlier that day I instead drove up the track and found a good parking spot as it reached the dismantled railway line. He'd told me that the postman used that as part of his regular route and the gate near the road was never closed. 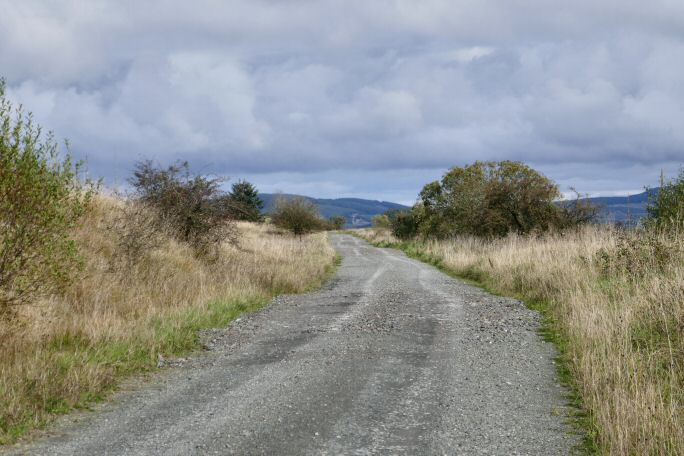 Walking along the railway track One kilometre NE along the track a forestry track leads uphill to another parallel track. Inca's March 2017 report had mentioned finding Jean's Spring along there, so I went in search of it. His report's photos showing it hidden a short distance from the track in the forest with its location marked with black and white posts. The posts were still there but the forest had gone.]. He would be saddened at this and what came next though it was always going to be inevitable. His report eloquently continues:-

Two or three tree lanes to the right (northeast) of this I located the beginnings of a firebreak which ran directly uphill. Indistinct at the beginning, it soon turned into a fine path. This was my favourite part of the day. Some firebreak walks can be dank, dismal affairs. This was better. Although steep at times, it felt roomy and light. The forest had a deep silence that was almost meditative. The only sound was tread of my boots on pine needles. Several branches were overlain with a moss that looked unnatural in growth. Almost like bits of cloth that had been draped there by human hand

The scene was now much changed though his route uphill could still be followed. Buldozed path above the spring The other fire-break looking uphill The other fire-break looking downhill

This still gave a route up the side of the now felled area to the ridge. View along the ridge to the summit

From there it was only a few minutes to the cairn that marks the approximate location of the summit. Following in Inca's literary if not literal footsteps I headed back along the ridge and continued over Arnton Fell. Its summit cairn had been joined by what appeared to be a mobile phone micro-cell. It has probably been installed to give better broadband to nearby communities around Steele Road and Hermitage judging from where the antennae pointed. I'd been passing cows on the other side of the fence and as I continued to the trig point was now among the sheep. A prominent peak in the distance foiled my attempts at identifying it at the time. Later with the full 1:25,000 map I decided it had to be Tinnis Hill a 404m peak just over eight miles away and SW of Newcastleton. From there it was an easy descent down to the railway line with the last section through knee-high grass, but for once no tussocks! For those who may be thinking of following my route this October I leave you with another warning road sign I passed on the B6457 during my drive home. I expect the local council website will have detailed information, but from experience Traffic Scotland is only concerned with A roads and motorways.

Good to see these two Borders hills again. It's a useful report for anybody thinking about tackling them in the near future. Thanks for the name check too. I remember that day, and the wander through the Blackwood Hill wood well. There was something very stilling about it. Shame to see the terrain like that now. Hopefully it's cyclical forestry and the wood will be fully reinstated. You're making quick work of these Southern Sub 2ks 👍 Best of luck with the remainder.

inca wrote:Good to see these two Borders hills again. It's a useful report for anybody thinking about tackling them in the near future. Thanks for the name check too. I remember that day, and the wander through the Blackwood Hill wood well. There was something very stilling about it. Shame to see the terrain like that now. Hopefully it's cyclical forestry and the wood will be fully reinstated. You're making quick work of these Southern Sub 2ks 👍 Best of luck with the remainder.

WH reports are useful reading especially for pointing out those interesting features that are not on the map and I'd otherwise miss - Jean's Spring for one. I couldn't find any information on it on-line and it's not on any OS maps old or new. The lower slopes that had been felled when you were there have all replanted I think. I expect the same fate is in store for everything higher. Perhaps we could go back there in another few decades to find your meditative fire-break recreated?