A Sweep of Far Eastern Fells

A Sweep of Far Eastern Fells


With an imminent return to gainful employment – albeit temporarily – I was determined to get in as full a day as possible. The previous day had been a stunner, with clear weather and great views. While a frost still clung to the valley bottoms, the sky above had a greyish tinge and the clouds were just dropping low enough to begin playing with the tops. So, here goes ... a whirlwind recollection of the day.

An immediate leg-stretching, lung-bursting start to the day as the ridge is tackled head-on.
The frost is left below and the breeze picks up – glad of the Christmas pressie hat with the furry flaps
A cairn and the choice between humps for the top – then it’s carry on upwards as Caudale Moor beckons. Apart from a misty view southwards down the stretch of Windermere, it’s hardly a place to dwell
Just the corner of a wall really – and then a view across to Thornthwaite Crag – phrases like “wind-blasted heath” sprang to mind.

One of those spurs amidst higher ground that must get passed by in favour of greater glory.
Don’t – it’s worth it on its own – and as a way of avoiding the steep slog up the west side of Thornthwaite – just contour round from the col and along to the cairn – then afterwards it’s an nice easy angled slope back up to the beacon.

North west across Hartsop Dodd to Helvellyn from Gray Crag

Escaped quickly owing to a massive influx of fell-runners – too much lycra, skimpy shorts and bare legs to feel comfortable in the chill.

Things started to get busy from here, as the silhouettes previously seen from the parallel ridge of Gray Crag had suggested.
Shame the views down the Riggindale ridge were lost in the mist – can’t win ‘em all.
Unfortunate recollections – the last time I was here was the weekend before the foot and mouth outbreak back in February 2001

Just follow the bus queue – well the one that isn’t going over to Kidsty anyway. 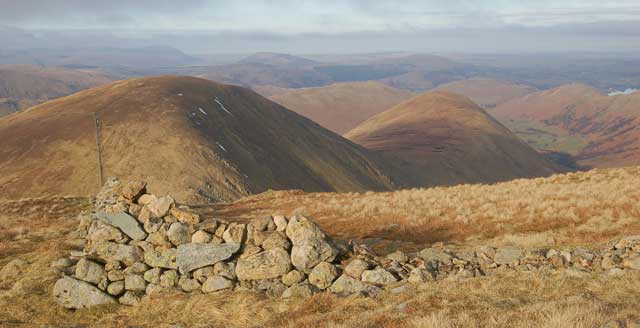 Rest Dodd and The Nab from The Knott

It looked tranquil, deserted and alluring – then just as the cairn came into view, so did at least twenty other walkers – who didn’t appreciate about my query about the next bus.

The best time of the year to cross what must be an absolute bog-fest in warmer times – but worth the jaunt.
A pleasant stroll – and at least you don’t have to go back up the steep slope of Rest Dodd to get back onto the route across to Brock Crags Access point to The Nab from northern slope of Rest Dodd

The end of a great day – one of those tops that seem to have a choice for the summit until you see the cairn out on the western edge. Up Pasture Bottom from Brock Crags

Not quite sure if my steep descent down its southern slope was quite what I’d intended, but the track back to Hartsop village was welcome relief to tired knees and hammered toes.

All in all, it was a successful couple of days, with Stybarrow yesterday as well. In addition to a healthy clutch of unvisited Wainwrights, there were satisfactory tests for maps, gloves and new hat (Christmas pressies from daughters), new boots (essential pressie to self), set of new filters (from the tolerant other half) and an opportunity to play with a new GPS (when all else fails just ask for cash).

You have certainly had a busy two days,done many of those in this walk and really like this area, whenever we've been there its been fairly quiet, just the deer and a few walkers, must have been lucky

Looks like you've been unlucky I've always had these summits to myself, although I've usually passed a train of walkers climbing while I'm on my way down. Fridays and Mondays are quite busy as people take long weekends, I find midweek you see very few people about.

You certainly had a full day, ticking off a few !

I climbed the Nab after heavy rain and was surprised it wasn't a bog-fest - although I think if it wasn't a Wainwright then the deer would more or less have it to themselves.

I've been eyeing these hills for a while now and the more pics I see the more I want to bag them. All to often I've neglected the "lesser tops" to head for the biggies. Its coming to the time to turn more to these tops and increase my Wainwright count.

Nice pictures and interesting research for me, as am planning to do all these along with High Street on Dec 27th 2016. You give no evidence of all the bus queues of walkers and runners, though, so I think you were imagining them!

Well you sure got your moneys worth there OD, thats a great winter outing

too much lycra, skimpy shorts and bare legs to feel comfortable in the chill.